3 Days in the Life of Lewis Hamilton: Racing Star Causes Trouble in NZ

Lewis Hamilton has had a busy three days. We take a look at some of his best work from his stay in New Zealand en route to the F1 Grand Prix.

Lewis Hamilton has been spending some time in New Zealand on the way to attend the Australian Formula 1 Grand Prix in Melbourne this weekend and has been causing all sorts of trouble.

Where do we start?

First off, the 31 year old publicly criticised an Auckland Casino, telling a potential 3.2 million people (that’s how many Twitter followers he has) "Don't ever go to sky city casino in Auckland, they treated me like dirt. Can't believe how rude they were. Worst casino experience ever." 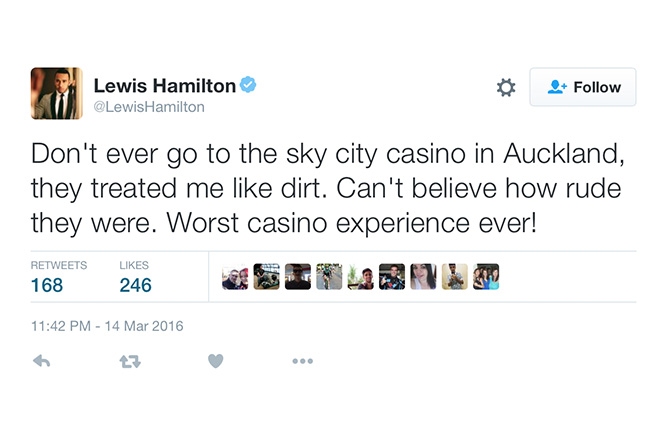 Hamilton, who drives for Mercedes, soon deleted the tweet. It was reported Hamilton was violating casino rules by wearing a hat and sunglasses inside, which was where the tension stemmed from.

From there the 31 year old F1 World Champion driver posted videos to Snapchat showing him driving down the Auckland highway on a motorbike. Cool? Yes. Safe? not really.

New Zealand police didn’t seem concerned by how famous Hamilton is, or his driving credentials.

"Police will be reviewing the footage and taking any appropriate action it deems necessary," a spokesperson said.

"Police take a strong stance on any activity which places undue risk on the lives on any person on the road. The use of mobile phones is a significant distraction, especially on a motorcycle, and can cause serious crashes on our roads."

He has since been cleared - "The video footage available does not provide us with sufficient enough evidence that an offence has occurred," an Auckland City Police statement said.

But the fun didn’t end there. Hamilton seemed to think he hadn’t quite made enough trouble for himself yet.

Flying domestically in New Zealand, he complained about having to sit with the plebs in economy on his Snapchat.

"Man, I’m loving these commercial flights, we’re flying in economy, yep, that’s how we do. Saving so much money. I’m loving it."

And then said this in yet another very ill advised and strange Snapchat message.

"So we don’t know where we’re going, we think we’re going to one place but we might be going to China 'cause there are a lot of Chinese people on this flight."

Since then he’s possibly trying to make-up for it by saying "Yip this is the most beautiful place I've seen” whilst on a helicopter ride in Queenstown.