The 32-year-old Toyota LandCruiser 70 Series will live on with crucial safety and efficiency updates scheduled for the last quarter of 2016.

Toyota’s ageing workhorse – the Landcruiser 70 series­ – is being fitted for the first time with electronic stability control and traction control systems, with additional upgrades including cruise control, brake assist, and electronic brake-force distribution.

Toyota has scheduled the updates for the last quarter of the 2016 calendar year.

The best-selling single-cab will be the only variant in the range to add curtain and driver’s knee airbags, which Toyota says it expects to elevate this model’s independent crash safety rating from three to the five stars.

It will be a critical score for the 70 Series owing to the fact that an increasing number of fleet-buying companies have policies requiring vehicles with the maximum safety score.

The LandCruiser 70 Series’s 4.5-litre V8 turbo diesel engine – which powers all variants including the aforementioned single-cab, a dual-cab, wagon and Troop Carrier van – will also achieve a Euro V emissions rating. This has been achieved both through revised gearing of the six-speed manual transmission and new piezo injectors that spray fuel into the engine’s combustion chambers more accurately and therefore more efficiently than conventional injectors. 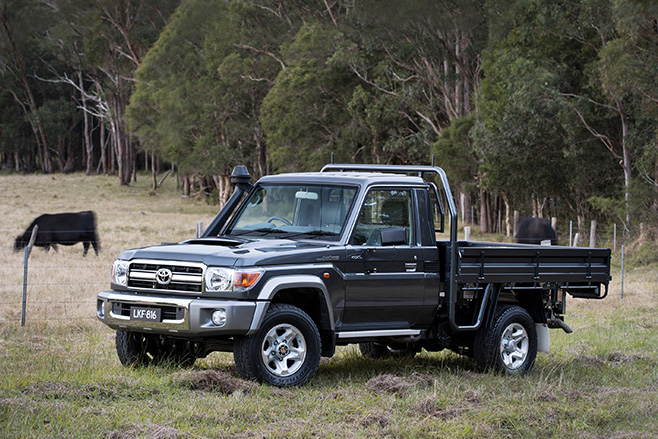 Toyota Australia engineers have aimed to further reduce vehicle vibrations by strengthening the vehicle’s frame with thicker side rails.

The suspension’s springs and dampers have been adjusted in conjunction with the stiffer frame, which Toyota says aids vehicle handling and stability. The stability and traction control system development was focused on dirt roads, farms and country freeways where the 70 Series is most commonly used.

The engineering changes could be among the last made by Toyota Australia, with its local Technical Centre due to close imminently ahead of the Japanese brand’s 2017 exit from local manufacturing.

The Toyota LandCruiser 70 Series is currently priced from $56,990.