Driving in an off-road rally

Need some excitement in your life? Keen to get out of your comfort zone? An off-road rally might be just the ticket.

Heart-bursting, arm-spreading, life-affirming exhilaration – when did you last feel that rush? It can be hard to extract from everyday activities. People often talk of creating a vacation mindset by turning off devices, kids and barking dogs for some downtime. But how do you do the opposite and create an experience that is upliftingly thrilling? Simple: drive in a rally.

Essentially, a rally is an organised point-to-point (as opposed to circuit) motorsport event, and can be held on sealed roads (‘tarmac’), on dirt (‘off-road’), or a combination of both. Drivers might be ranked for speed, technical ability, navigation or endurance – there’s something for everyone, regardless of experience or ability.

When it comes to driving, most of us are used to abiding by the rules: don’t go too fast, don’t slide in the dirt, don’t hit the mud at high speed. In a rally you have permission to go hard and test your limits in an arena many women don’t even realise exists. Most importantly, rallies bring together a community of like-minded adventurers, who are always keen to help a newbie find her feet.

My life-changing rally moment came in 2012, when I was invited by Volkswagen to drive with my good mate Sammy Stevens in the women-only Rallye Aïcha des Gazelles, across the sand dunes, mountains and mudflats of Morocco. Famous throughout Europe for its mixture of all-female madness, gruelling terrain and exotic landscapes, the Rallye is almost unknown in Australia, but should be on every gal’s bucket list. From professional drivers and women keen for a challenge to TV personalities and even a Miss France or two, the Rallye brings together all types, all ages and all languages (but mainly French) for a drive that will leave most of them indelibly changed.

All my driving until then was on tarmac and out of competition, so this was something absolutely foreign: 180 women in an arduous eight-day marathon, following a secret off-road route that was only revealed at 5am each day – in French. Qu’est-ce que vous avez dit? Stuffed if I know – my French started and ended in eighth grade. We were supposed to have passed a two-week sand-dune driving program and learned to navigate with compass and map, but we missed the memo and Sammy and I launched into the Extreme route on the towering dunes of Erg Chebbi with hearts in our mouths, a week’s supply of French military rations, pallets of Red Bull and a swagful of swear words.

Turns out driving on sand dunes is much like skiing: keep rolling in second gear, make wide sweeping turns and never, ever brake. Brake while heading up a dune and you’ll swamp the car in sand, which means digging it out while praying it doesn’t roll on you. If you panic and brake as the car crests the top of the dune, you might dig in and even roll your car arse-over-cabin. We slid nose-first down a particularly steep sand hill and ended up balancing on our bumper bar for a moment. That’s what cargo nets are for, and as we were barraged with drink bottles and sleeping bags, we wished we had one.

Crucial footnote: the volunteers who work the medical and organisational tents are some of the best-looking men you have ever sidled a dust-covered car up to. Word is it’s a highly coveted gig with, er, fringe benefits, and it was clear that despite the exhaustion, the heat, high emotions and an early curfew, everyone was having an excellent time.

You want what this rally has: adrenalin guaranteed, total immersion in French gutter talk and Moroccan high sands, and fun in spades. Literally. Shovelling sand every day for over a week between heart-stopping vehicular feats will send you home taut, tanned and transformed.

For the same high, minus the jetlag, you can start local with something like the Shitbox Rally or the Variety Bash across outback Australia, or you could jump straight into the born-to-be-bad Tatts Finke Desert Race (it’s on my revised bucket list). Just pack a rake, a shovel and traction mats, and the sandy beyond is yours for the taking.

Off-road rallying: the hardest thing I’ve ever had to do, but also the most exciting, and one of the most rewarding experiences I’ve had. That 10-day trial by sand, sweat and incomprehension changed the way I went about my daily work. It will teach you to not sweat the small stuff, and get on with what really matters. I was just a regular gal with a little more driving experience than many, and I was utterly transformed by the support of the rally community and the stretch of attempting something so far out of my comfort zone. So grab a four-wheel-drive, find some sand, and have a crack!

Sally Dominguez is a multi-award winning Australian product designer and architect now living in the USA. Her products include the Nest highchair and HOG tank. She is currently running her own Adventurous Thinking tools and strategies program. 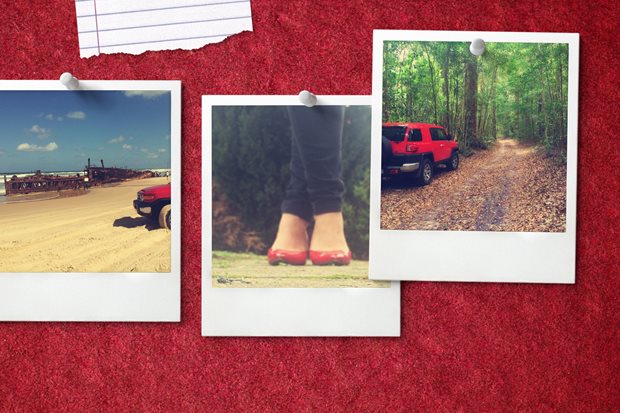 Spending a week in a Toyota FJ Cruiser taught us one very important lesson: red cars can be every bit as important as red lipstick. 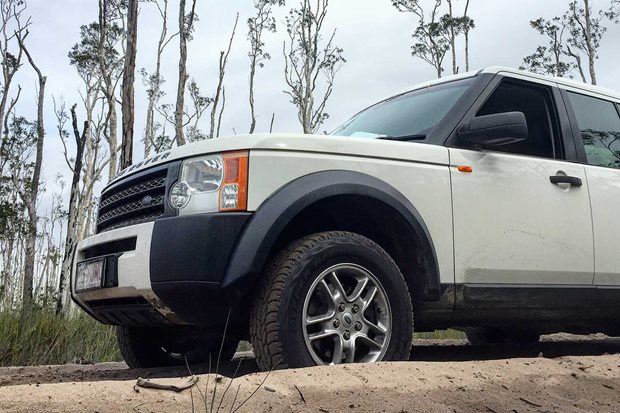 From Hyundai Getz to Land Rover’s world of Discovery, Hannah Statham shares her story on transitioning from hatchback to four-wheel drive.