The updated Citroen DS3 – still badged as a Citroen in Australia, even though in time DS will split off from Citroen and become its own brand – retains the quirky charm that we loved when it first launched, with a few improvements… and a couple of caveats.

The range is simplified. Basically, there’s no more entry level models. There’s only two models: the DS3 DSport, and the DS3 Cabrio. Both have basically the same engine, but the hatch makes ever so slightly more power than the Cabrio. Citroen say they’re not aiming to be the biggest in the market, which is lucky, for a couple of reasons.

Firstly, the new DS3 is more expensive. The last gen DS3 started from 27-odd grand, while the new DS3 DSport hatch is $33,990 and the Cabrio is $36,590. It’s not as much of a jump as it seems – the average purchase price of the DS3 was $32k, after buyers ticked the options they wanted, and the new DS3 comes basically fulled optioned. Nevertheless, it’s not cheap for its size.

The other sticking point – for the salespeople, at least – is: it’s manual only. No auto option, this is for three-pedal fans only. Which we’re fine with, but will inevitably keep this hotter-than-warm-but-not-quite-hot hatch in the niche category.

The Cabrio, we should note, is less of a convertible and more of a largest-possible-sunroof: the cloth top retracts back along the edges of the roofline, leaving the doors in place (and pretty much eliminating your rear vision.) It doesn’t feel as open to the elements as a regular convertible; on the plus side, you can open and close the roof at up to 120km/h. 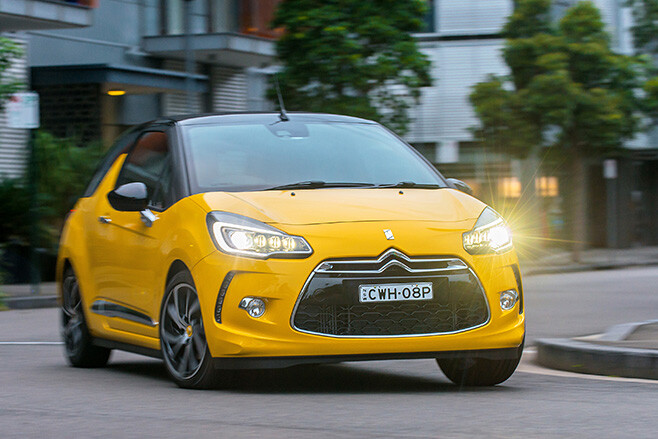 Mostly the engine – a new 1.6-litre four-cylinder turbo-petrol, with a useful-but-not-intimidating 121kW and 240Nm.

There’s some exterior tweaks – new LED and Xenon headlights, new 17in alloys, a reversing camera as standard - but you’d be doing well to tell the updated model from the last one from further than 20 feet away. It is, as the French would say, a bloody ripper.

One thing that takes some getting used to: it has the longest clutch travel in the known universe. Press the clutch in, and when you start to let it out, it feels like about a foot of travel before you get to the friction point… and then it all happens in about two inches. The first time we went to pull out from the carpark, I thought I’d somehow left it in neutral – that’s how far the clutch comes out with no result whatsoever. It’s slightly bizarre until you get used to it. But friction point aside, the manual box is actually great: short snippy shifts, and well paired with the 121kW, 240Nm four-pot: maximum torque is available from 1400rpm, and maximum power at 6000rpm, so it always feels lively, and never sluggish. On a blat through Mount Glorious outside Brisbane, the DS3 is solid and confident through corners, thanks partly to the car’s lean 1140kg weight, and even though 0-100km/h in 7.5 seconds doesn’t sound particularly scorching, it feels spritely and is good fun when you give it the beans.

On the commute home?

Both the hatch and the cabrio are comfy rides in the front seat, even for full-figured gents – but you wouldn’t want to have to squeeze in the back seat. The air con seemed more of a white noise generator than an actual cooling unit – even with the AC turned up to full, you could only detect a breeze by putting your hand right on the vent – but all in all, both the cabrio and the hatch devoured distance in the urban grind and on freeways in the best way possible.

There’s a new “Active City Braking” system, which would come in handy in case you had a stroke or were setting a new record on Angry Birds while driving: beneath 31km/h, the short range laser sensor (tucked inside in the rear view mirror mount on the windscreen) will detect if the car in front of you has slowed or stopped, and the system automatically adds the brakes. Above 31km/h the system cuts out.

The infotainment screen seems like it ought to be a touchscreen but – surprise – it isn’t; so everyone who gets in the front will end up stabbing it with their fingers like the lovechild of Edward Scissorhands and Jack the Ripper.

The sat nav was befuddled by Brisbane, directing us right at no-right-turn intersections, or urging us to drive across concrete road dividers; and entering directions is an old-fashioned chore with the twiddly knob controller. Seriously, Citroen. Put in a touchscreen.

Because of its slidey-opening roof, the Cabrio has a tiny boot opening – you’d probably struggle to get a large bag in there.

What’s it cost and is it worth the coin?

So the DS3 DSport hatch is now $33,990 – that’s $4k more than the old one – but, Citroen counters, they’ve included $5k worth of options as standard. A slightly spurious argument, perhaps, but the DS3 is a pretty well kitted out car - LED and Xenon headlights with sequential indicators, that Active City Brake system, rear camera and parking sensors, tyre pressure monitors, and various whatnots that would have been options in the outgoing car.

Would you have this or a Mini Cooper S?

The Cooper S comes in at $36,950 for the three-door, so a few grand more than the DS3. Now, the Cooper S is a hoot to drive, and is slightly more practical than the DS3. On the other hand, if you’re in the market for either, then you’re probably looking for something a little left of field, and the DS3 delivers that – personality, flair, and customisation options – in spades. We’d still take the Mini – but it’s a close run thing.

Click here to find out more about the Citroen DS3.