Major upgrades for new model year bring improved dynamics and a manual option to make the F-Type even more desirable.

Since its global launch in 2013, Jaguar’s F-Type has had numerous laurels hung around its neck, but none bear the imprint of the famous British maker’s corporate butt, because it hasn’t been resting on them.

Not content with rave reviews and solid sales around the world, Jag has continued to add tech, spec and new variants to the F-Type range. And that approach continues full-throttle for the 2016 model year.

Closer links between brands within the Jaguar Land Rover business has increased opportunities for sharing hardware and engineering expertise, resulting in some interesting performance options. 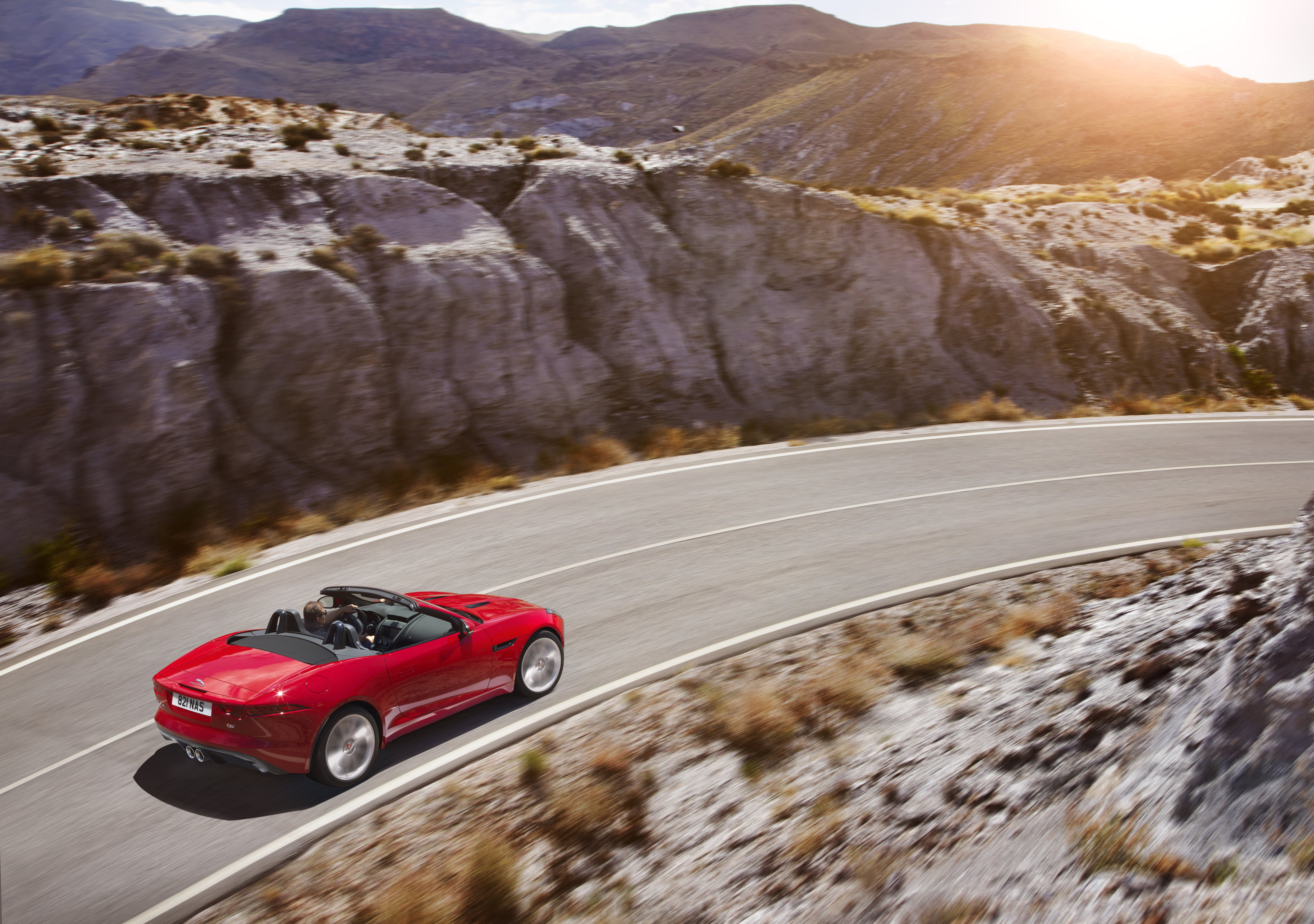 There are three major changes for the upgraded F-Type: Availability of active all-wheel drive (AWD) on V6 S and V8 R models, a six-speed manual option for V6 variants, and the arrival of the 405kW/680Nm V8 R specification in Convertible form. This broadens the F-Type line-up from six to 14 models; 12 of which are offered in Australia.

Subtle external changes are limited to a new bonnet profile for AWD models, with more pronounced ‘power bulge’ and air vents positioned further apart and further forward, either side of it. Steering assistance shifts from hydraulic to electric, and the torque vectoring (by braking) system that’s been standard on the R Coupe is now available on V6 models.

Over a 350km launch drive program, we had the opportunity to sample the new F-Type in V8 R AWD Convertible, and V6 S RWD six-speed manual Coupe form, with a circuit session focusing on the V8 R AWD Coupe. 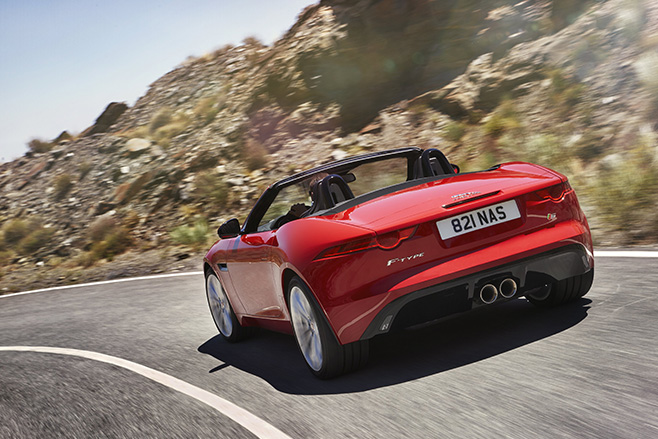 The original V8 S Convertible’s main party trick was its riotous noise. Switch the active exhaust to sport mode and the 364kW/625Nm blown V8’s glorious howl around the rev counter was more than matched by outrageous pops and bangs on the overrun.

It sounded like a fireworks display. But the addition of 41 extra kW and 55Nm turns this into an aural assault of shock and awe proportions. Unsuspecting fauna around the rural roads we were on must have thought hunting season had opened, with furious tailpipe explosions sounding like nitro filled hand grenades peppering the countryside.

But any claims the exhaust makes the V8 F-Type is more than able to back up. Jaguar claims 0-100km/h in 4.2 seconds, and this beautifully angry machine feels every bit that quick.

The switch to electrically-assisted power steering isn’t 100 percent convincing; delivering good, rather than great highway feel. Although the track session proved the AWD system and parallel changes to the car’s suspension set-up have made a big impact.

Past on-track experience with the F-Type Convertible highlighted a Jekyll and Hyde transformation once the level of attack moved beyond eight tenths. Above that point what had been predictable and balanced dynamic behaviour became almost the opposite, with the rear end seemingly making up its mind as to when it would and wouldn’t grip. 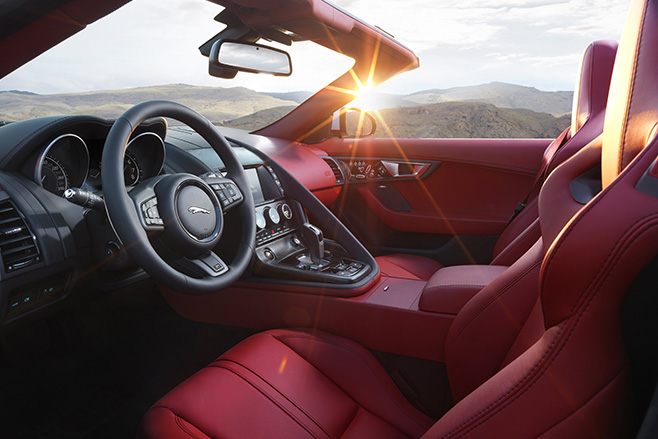 Default setting is 100 per cent drive to the rear, with a proportion sent to the front wheels as needed, up to a real-world maximum of 50/50. Another benefit is the front-rear torque split controlling yaw angle to minimise oversteer. Add stiffer springs and dampers, combined with the torque vectoring system, as well as mega brakes (carbon optional) and the AWD F-Type becomes a formidable road and track weapon.

That said, the switch to a six-speed version of the V6 S Coupe was a revelation. Weighing in close to 140kg lighter than the V8 AWD, the RWD (only) manual immediately feels more nimble, the steering somehow delivering better road feel and response, even during relatively relaxed B-road cruising.

Like 007 doffing his wetsuit to reveal an immaculate dinner suit, this Jag switches seamlessly from back road blaster to urban cruiser. It’s relaxed, quiet and beautifully finished. Seats that provide excellent lateral support, double up to deliver superb overall comfort. 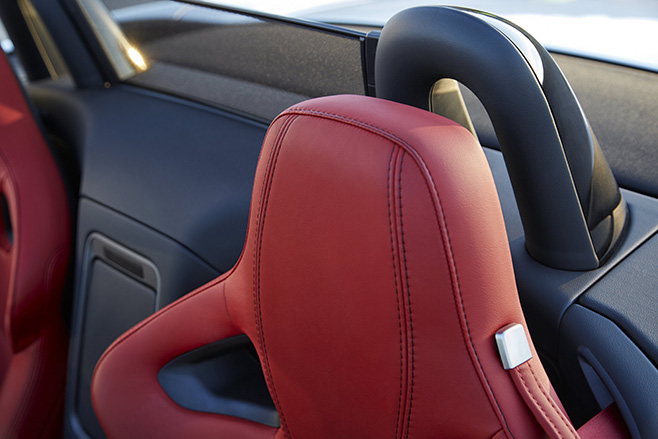 Despite running on 20-inch rims wrapped with hi-performance Pirelli P Zero rubber, Ride quality is impressive, the eight-speed auto cycles through its ratios with imperceptible ease, and the new infotainment set-up works well.

Despite a short (45mm) throw between gears the six-speed manual’s shift feels doughy. No game-breaker, but not as precise and positive as its maker claims.

Another niggle is the new and improved nav system’s occasional confusion in built up areas. As first world problems go, it’s up there. But hey, this is the quintessential first world car.

Entry point for the Aussie range is $119,470, which secures you a V6 manual Coupe, rising to $261,370 for the full-house V8 R AWD auto Convertible; a spread of more than $140k. Equipment levels across all models are suitably fruity.

Would you take the Jaguar F-Type V8 R Convertible or Porsche 911S Cabriolet?

The F-Type is (half a second) faster 0-100km/h, (much) louder and ($27k) cheaper, with style that’s closer to Austin Powers shagadelic than the Teutonically tasteful Porsche. We’ll take the Shaguar, baby.

Click here to find out more about the Jaguar F-Type.