Ford’s Territory is a big SUV with up to seven seats that is versatile inside, rides very comfortably and steers very well. Engines are strong too – a turbo-diesel V6 and a petrol straight six – and they drive through a great auto gearbox. The Falcon-derived Territory was a Ford Australia masterstroke in 2004, and after a decade of refinement it remains a winner.

Getting used to the diesel: it takes a few moments to develop good power after you press the accelerator, especially from low speeds.

Filling up petrol versions. Large SUVs – especially those with big engines – use a lot of fuel, and a petrol-powered Territory is among the most thirsty.

The Ford Territory drives either its rear wheels or all four wheels, depending on the version. The Territory is classed as a large SUV, lower priced.

What features do all Ford Territories have?

Climate control air-conditioning (which maintains a set temperature). Cruise control, operated from buttons on the steering wheel. A reversing camera, and front and rear parking sensors. A power-adjustable driver’s seat. Projector headlamps, which are more effective than ordinary halogen beams.

Wheels made from an aluminium alloy, which are usually more attractive than steel wheels. A full-size 17-inch steel spare wheel.

Seven airbags: two directly in front of the driver and front passenger; one alongside each front occupant to protect the upper body; a curtain airbag on each side protecting the heads of front and middle-seat passengers; and a knee protection airbag for the driver.

The diesel uses about 25 percent less fuel than the alternative engine, a 4.0-litre in-line six-cylinder petrol.

Turbo-diesel Territories are slower to respond to the accelerator than petrol versions, particularly from low speeds. They also cost about $3000 more. Nevertheless, the diesel makes most sense if you drive a lot of highway kilometres.

All Territories drive through a six-speed automatic gearbox.

Step past the least costly Territory, the TX, to a Territory TS and in addition to the standard kit you get front foglights, and windows tinted to reduce sun penetration. A TFT screen with crisper graphics enhances the 8.0-inch multimedia interface.

There is a leather wrapped steering wheel and gear shifter, and the seats have leather trimmed bolsters on either side of the base and backrest. Dual-zone air-conditioning allows you to set different temperatures for each side of the cabin. The sound system is better. Wheel diameter increases an inch to 18 inches, and tyres of a slightly lower profile are fitted. The larger wheels lift the exterior appearance, and the smaller tyre sidewalls slightly sharpen the steering and handling.

The TS also comes with a third row of seats, for a total of seven. (Deleting the third row is a no-cost option. Conversely, this third seating row is available on the TX at extra cost).

The most expensive Territory, the Titanium, has satellite navigation, full leather seat trim, and a driver’s seat that remembers your settings. Wipers operate automatically when a sensor detects rain on the windscreen. LED daytime running lights make you more visible. Rear passengers can watch DVDs on a 10.2in screen. Aluminium front and rear scuff plates are among the cosmetic enhancements.

Choosing all-wheel drive denies you the option of a petrol engine: all AWD Territories are turbo-diesel powered.

The only standard colour is flat white. The remaining six are prestige colours available as extra-cost options.

How comfortable is the Territory?

The Ford Territory is a very comfortable family wagon, with an excellent cabin and a relaxing ride.

The blend of ride and handling is more like that of a good passenger car than like most SUVs, perhaps because the Territory is derived from the Ford Falcon sedan.

The Territory has a longer suspension stroke and taller tyre sidewalls compared with the Falcon, both of which contribute to superb isolation from poor road surfaces, whether corrugated gravel or potholed urban tar.

It’s easy for front occupants to find a pleasant seating position, helped in the driver’s case by the standard power-adjustable seat (with manual backrest adjustment) and tilt and reach adjustable steering column. The seats are broad, and cushioned just right for long-haul comfort.

Buttons and dials for the multimedia, air-conditioning and other minor systems fall within easy reach and are simple to operate.

What about safety in a Ford Territory?

The inclusion on every Territory of seven airbags, a reversing camera, front and rear parking sensors and voice control of the multimedia system constitute a solid standard safety package, contributing to a rating of Excellent for all models.

The side-curtain airbags extend only past the first and second-row seats, however. That leaves passengers in the third row without head protection from side impacts.

The Territory hides its age well in most areas, but it shows in the absence of active safety features such as automatic emergency braking.

You will enjoy driving a Ford Territory. It steers and handles much more responsively than most large SUVs at this price point.

The electromechanical power steering doesn’t provide a lot of feedback from the front tyres but it is well weighted and reassuringly accurate.

The chassis gives you a sense of cohesion and balance between the front wheels and the rears – the front tyres turn into corners enthusiastically, and all four tyres have a secure grip on the road. (By comparison, in off-road-biased 4WDs, such as the Toyota Prado, the front commonly has to be coaxed into corners, and the car can be unsettled by mid-corner bumps.)

Rear-wheel-drive Territories are just as capable as AWD versions on dry, sealed roads, and even respond more eagerly when turned into corners. All-wheel-drive, however, is welcome on slippery or loose surfaces.

The AWD Territories are also very capable of light off-road duty such as driving on uneven dirt tracks, helped by useful ground clearance (175mm) and good approach and departure angles. However, with neither a locking centre differential nor low-range gearing, they won’t go nearly as far as big 4WD wagons based on truck-type chassis, such as the Ford Everest.

The Territory’s rear seat is comfortable and the rear compartment is spacious. The seat cushion is well bolstered and offers good under-thigh support, and the backrest is angled agreeably. There are air-conditioning outlets dedicated to the rear passengers. The DVD system in the Titanium version is a real plus for children (and their parents) on long trips.

The third-row seats in TS and Titanium versions are equally roomy for children – and those are the occupants they were designed for.

Carrying stuff is the Territory’s forte. It has a total of 30 interior storage compartments, including a lockable security drawer under the driver’s seat, multiple cup and bottle holders, and (in five-seaters) wet storage bins and a reversible floor in the cargo bay.

The window in the Territory’s tailgate opens separately, which is very useful for quickly and easily loading and unloading small luggage items.

The second and, where fitted, third seating rows fold flat to liberate van-like cargo room. Even with all three rows upright, there is a useful 441 litres available. Whether the third row is absent or folded flat, the volume behind the second row of seats is 1153 litres.

Where is the Ford Territory made?

The Ford Territory is manufactured in Australia.

A less thirsty diesel. The Hyundai Santa Fe and Kia Sorento, for example, each have a smaller turbo-diesel engine that offers similar power while using less fuel.

An automatic emergency braking system, such as that found on the most expensive versions of the Hyundai Santa Fe and Toyota Kluger. These systems use sensors to detect obstacles in front of the car – typically another car that has slowed suddenly – and a computer sounds a warning and then applies the brakes if it concludes that a collision is imminent.

The Hyundai Santa Fe offers a five-year warranty, and the Kia Sorento is warrantied for seven years.

There are several seven-seat SUVs that are much more rugged and effective off-road than the Territory, while driving less well on hard surfaces. Among them are the Ford Everest, and the Toyota Landcruiser 200, Prado, and Fortuner.

Are there plans to update the Territory soon?

The Ford Territory went on sale in 2004 and has been updated several times since. This facelifted SZII version arrived early in 2015 and was the last Australian-built Territory, with production ceasing in October 2016. Ford said it would retire the Territory name, and did not immediately announce a replacement large SUV.

The best value Territory is the least expensive, the TX. Our reviewers like the petrol rear-wheel drive version, given the responsive power of the big six-cylinder engine and the likelihood it would do most of its driving on sealed roads (as most SUVs do). 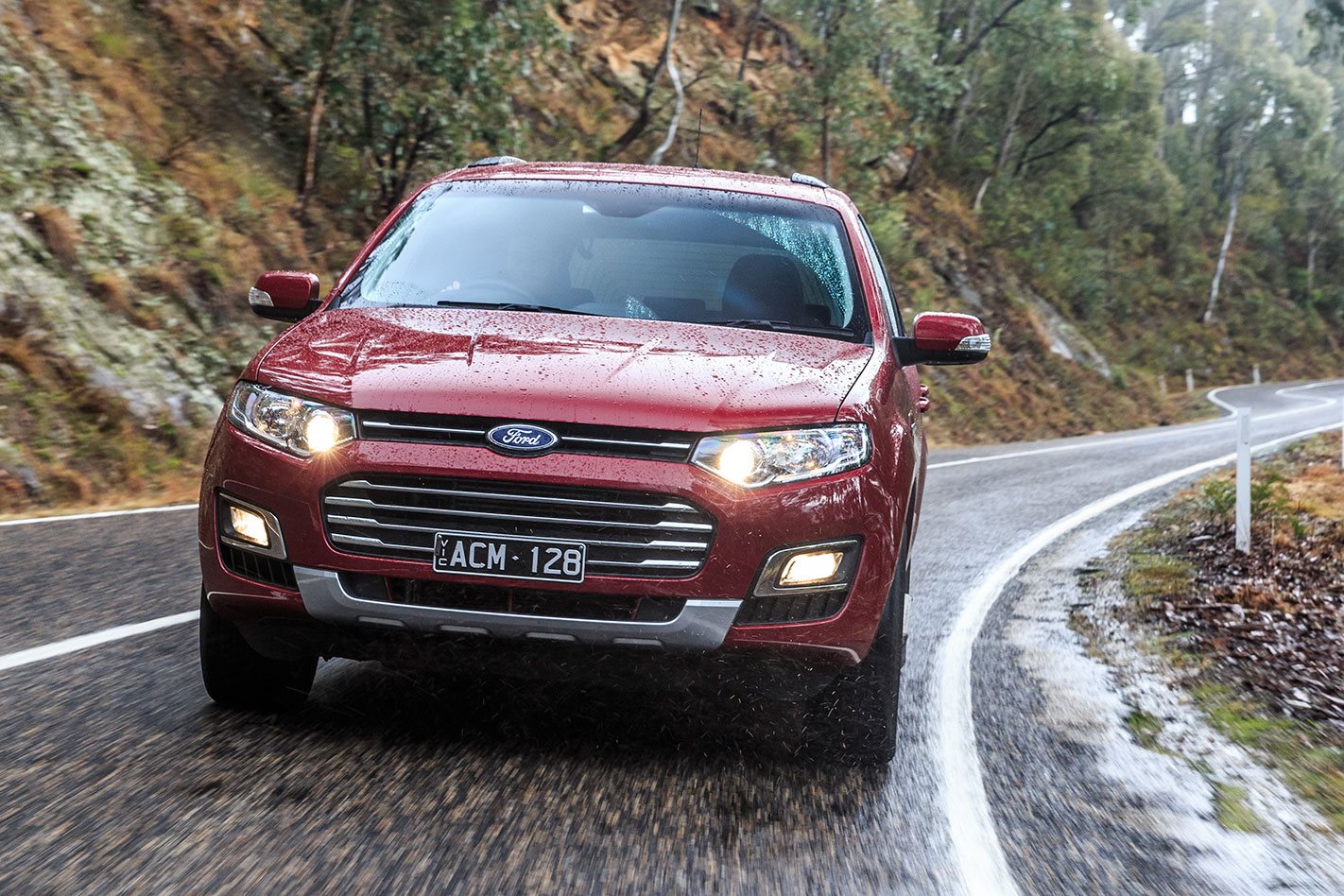 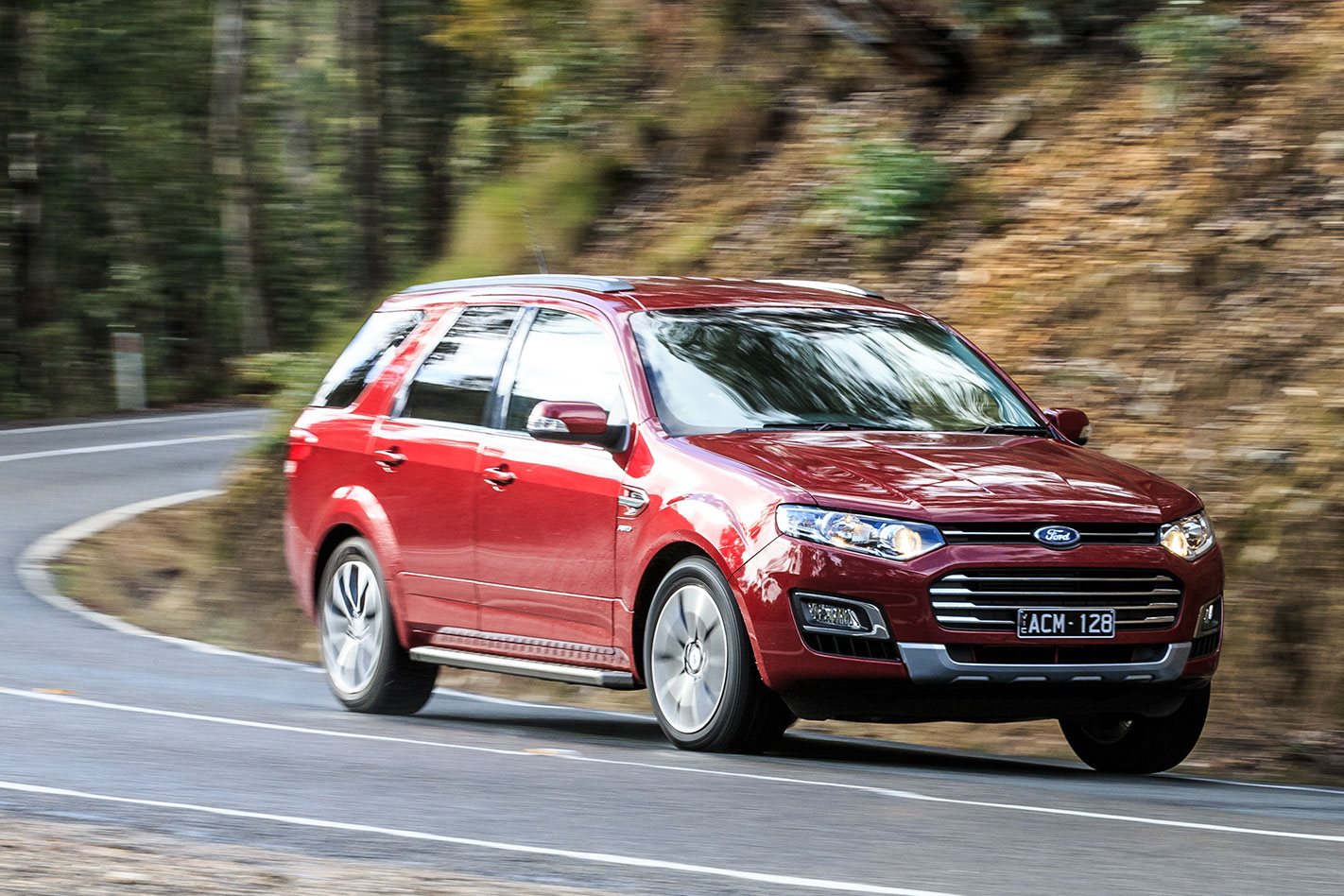 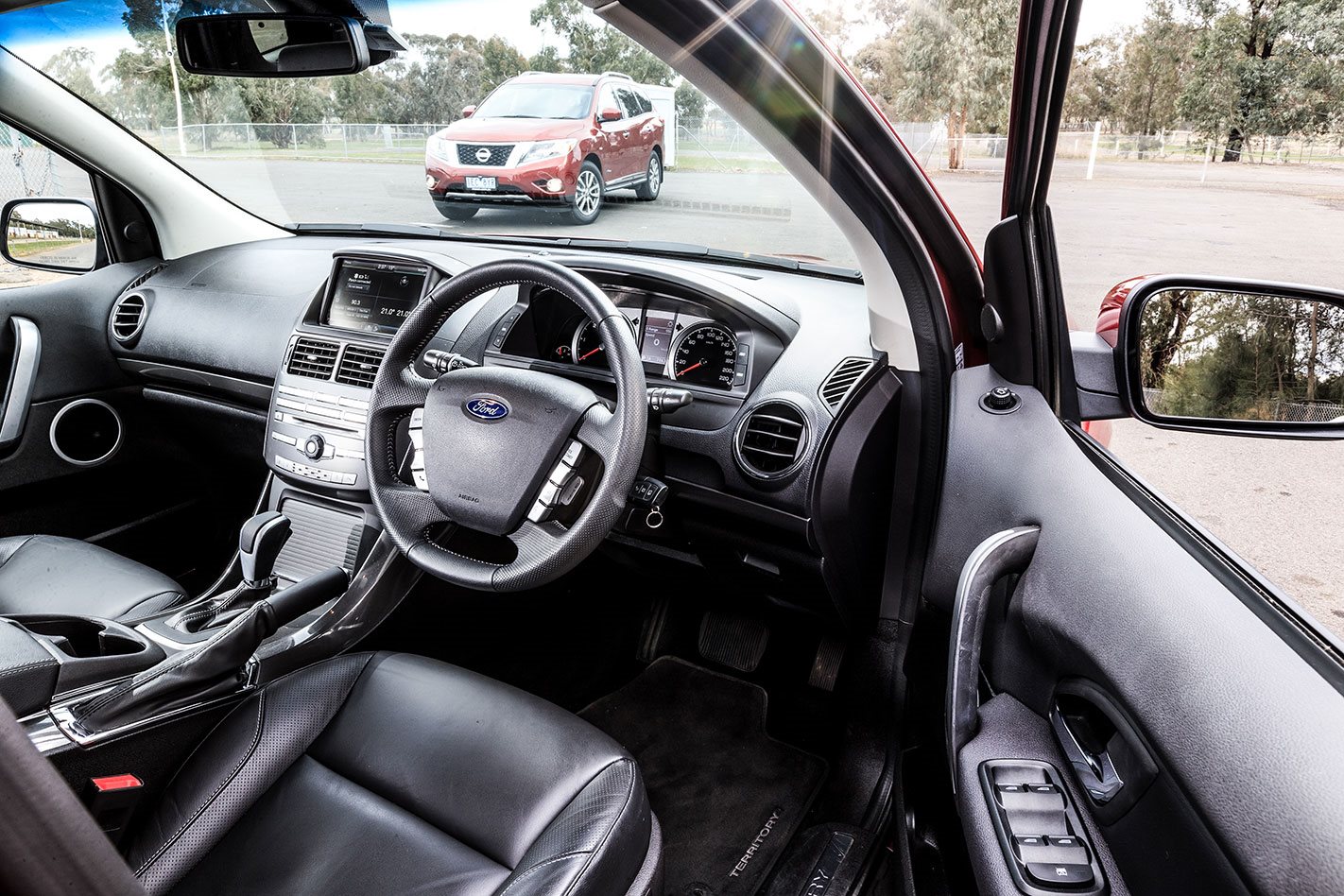 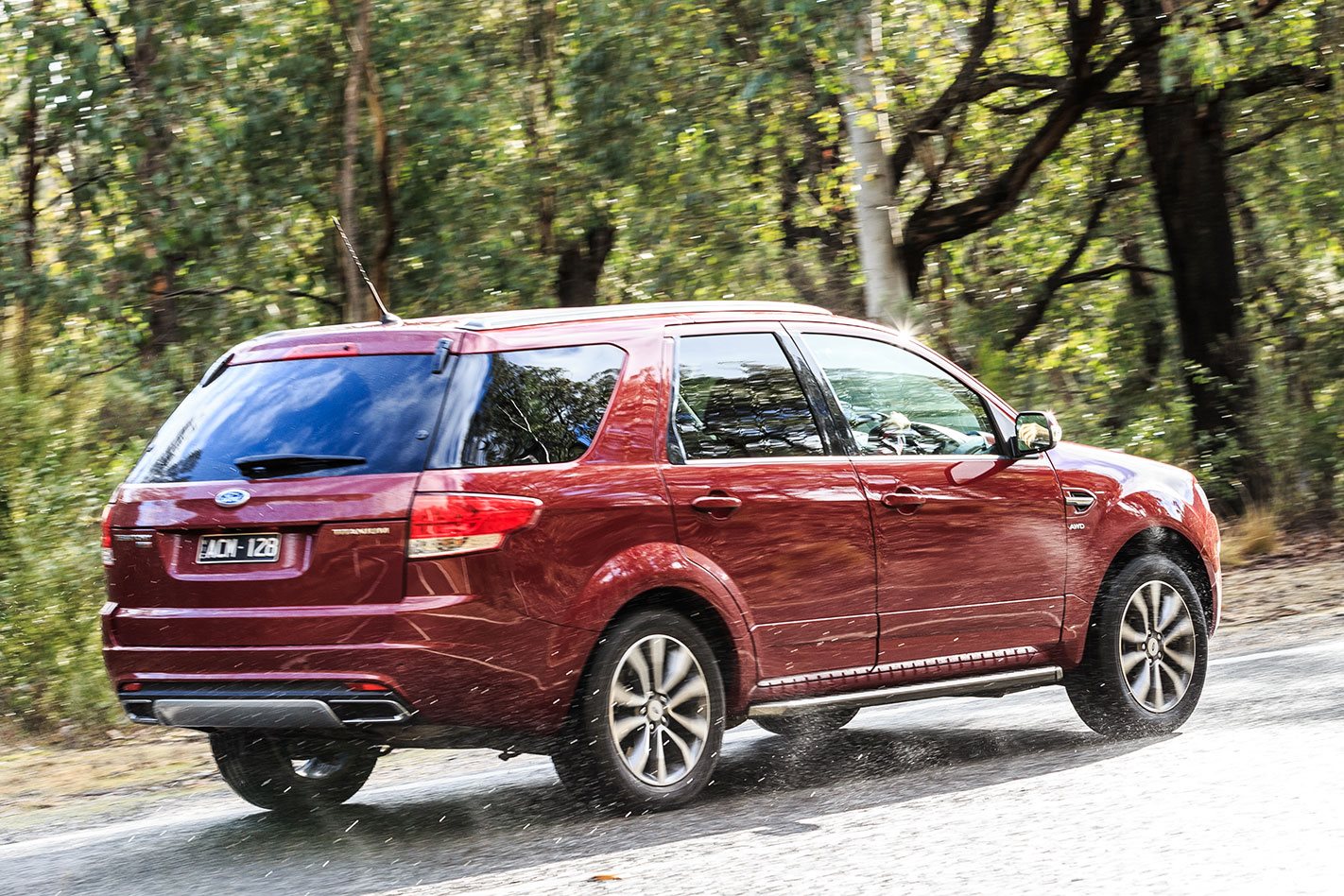 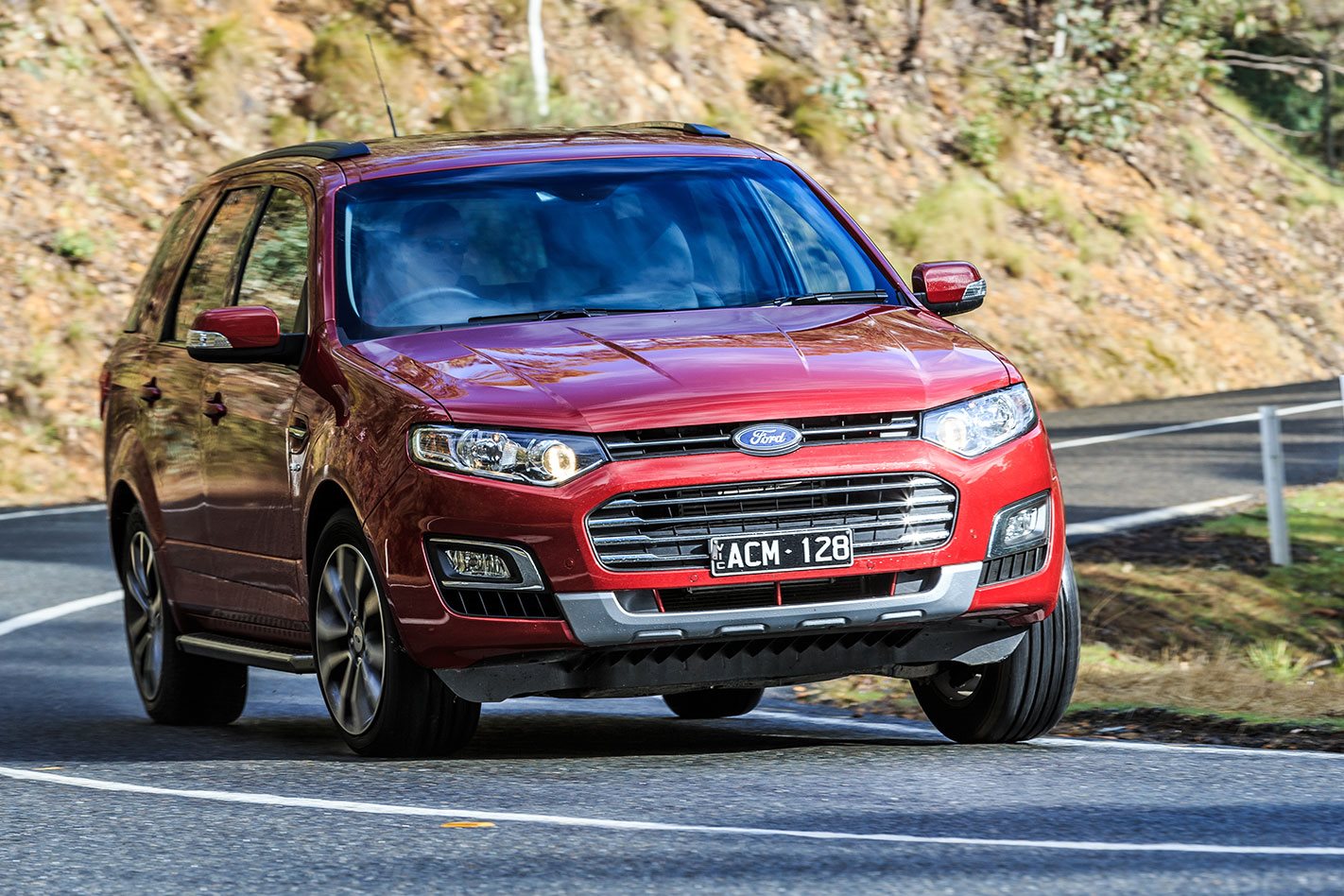