First turbo Lexus runs a 175kW 1998cc four, with water-to-air intercooling, that can run on both Otto and Atkinson cycles. Musters 350Nm from 1650rpm, but in practice the auto prefers to drop a few ratios and tap into the smooth mid-range. It powers the relatively porky NX from 0-100km/h in 7.1sec – a lot quicker than the Hybrid.

Both wagons roll on 18s – the F-Sport NX gets broader boots than lesser variants – however the Lexus smooths bumpy roads better than its rival thanks in part to its standard adaptive dampers, which gives it Normal and Sport Plus modes. The NX contains coarse-chip tyre noise to a distant roar, which makes for a soothing ride.

The NX’s RAV4 origins come through when you drive it with enthusiasm. It’s more capable than the Hybrid version, thanks to a unique suspension calibration, and switching the dampers does sharpen responses. The turbo’s crisp grunt helps too, however anaesthetised steering and over-reactive ESC limit the fun factor.

Despite being outdone by its Japanese rival, the Q5 is well-equipped, with eight airbags, tyre-pressure monitors, reverse camera, front/rear parking sensors, 10 speaker audio, sat-nav, and auto lights/wipers in common with the NX. But a blind-spot warning system adds $1250 and heated seats cost $800 extra.

Audi’s cabin quality is peerless, and the approach classy yet conservative, in contrast with the Lexus’s futuristic treatment. Lacks its rival’s power-adjustable steering column but matches it with an electric tailgate and more cargo space (540 litres, up 40) with the rear seats upright, or 1560 litres (up 15) when they’re folded.

The 235/60-shod Audi (the Lexus is on 55s) deals with bigger bumps better than it does small, sharp ones, however it rides with decent comfort on its fixed dampers (an adaptive system costs $2K extra). Tyre and suspension noise are similarly hushed, while Q5’s NVH suppression is on an equally high plane.

We’ve never loved the Q5’s steering – it’s at the artificial end of the spectrum of electro-mechanical systems. But in this company, it’s preferable to what the NX offers. It’s beefier, with a better sense of connection, though we suspect this has more to do with weighting than real feedback making its way to the driver’s hands.

It’s a narrow victory for the Q5 by this measure, though you may come up with a different outcome, depending on your priorities. You may be swayed by factors such as Lexus’s enviable quality and reliability reputation, or its four-year warranty. An Audi is a more fashionable choice, and we reckon the Q5 is better-looking. They’re equally effortless for daily driving, with the lung capacity to stretch their legs on a country road. Officially, they use the same amount of fuel. We really like the brilliantly high-tech Lexus turbo-petrol mill, and it should sip on the open road. But the Audi has an impressive donk too, plus that larger fuel tank for potentially greater range. The identically priced Lexus is more generously equipped, but the Audi is a more satisfying car to drive, despite its considerable vintage, and that gets it over the line.

This article was originally published in Wheels December 2015. 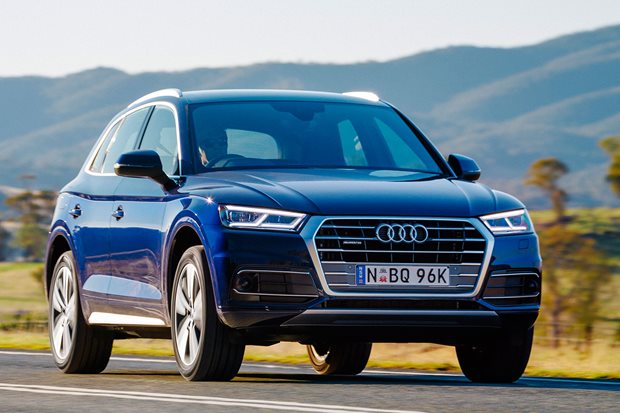