By Alex Inwood, with WhichCar staff

Expand Section
The Clubman is the biggest, roomiest and most practical Mini you can buy. So if you’ve got kids, or simply need more space, and love the look and quirky character of the Mini brand, this is the Mini for you. It still steers like a go-kart, and the least costly Clubman has a great little engine.

Expand Section
Getting home if you puncture a tyre – although that won’t be a problem around town. The Mini uses run-flat tyres, which means that if a tyre goes flat you just keep driving. However, you are not supposed to drive faster than 80km/h, nor further than 80km. And there is no spare. If you get a flat while on a drive in the country, you could be in strife.

Loading stuff into the boot. The opening is small, and the loading sill shallow. And while you can open the vertically split rear doors by waving your foot below them, this “kick” function (optional on Cooper and standard on Cooper S) is finicky and temperamental.

Having to wait for your manual Clubman. An automatic gearbox is standard, so if you want a six-speed manual – as you might in the sportier Cooper S, especially – the dealer will have to order you one.

Expand Section
The Clubman is offered solely as a six-door wagon. Yes, six doors, thanks to the Clubman’s vertically split doors at the back, which hark back to the original Clubman Estate built from 1969 until 1982.

All seat five and are front-wheel drive. The Clubman is classed as a small car, and straddles the lower and upper price brackets.

What features do all Clubmans have?

Expand Section
Cruise control, a reversing camera, and rear parking sensors. Dual-zone air-conditioning, which allows you to set different temperatures on either side of the cabin. Air-conditioning vents for rear passengers. Windscreen wipers that operate automatically when it rains.

A tyre pressure monitoring system, which warns you if a tyre has started to go flat. (This can give you more time to get a puncture seen to.) Wheels made from aluminium alloy (16-inch diameter on the least costly model, the Cooper), which are lighter than steel wheels and look nicer.

A six-speaker sound system with Bluetooth and USB connectivity for your smartphone. A 6.5-inch, centrally mounted colour screen.

Automatic transmission, as standard equipment. (You can also order a manual gearbox.)

Six airbags: two directly in front of the driver and front passenger; one alongside each front occupant to protect the upper body; and a curtain airbag on each side protecting the heads of front occupants.

Electronic stability control, which can help you control a skidding car. All new cars must have this feature.

A forward collision warning system, which alerts you visibly and audibly if it decides you are about to crash into something.

Every Clubman comes with an unlimited kilometre, three-year warranty.

This is a great little engine, and you always feel like it has plenty of power. The main reason you might not choose it is that you want a more engaging exhaust note, and more power.

You get both from the turbocharged, 2.0-litre four-cylinder petrol in the sportier Cooper S. It uses a bit more fuel but is still pretty good: 5.9L/100km in automatic trim, and an extra half-litre as a manual.

In addition, while the Cooper’s automatic gearbox has six ratios, the Cooper S auto gearbox has eight – which allows the engine to spend more time in its best working range. Both are conventional autos, rather than the dual-clutch type, so that they’re good around town. The manual box in either case is a six-speeder.

Expand Section
Paying more for the Cooper S brings you the bigger, more powerful engine and, in standard trim, the eight-speed automatic gearbox. You also get satellite navigation, seats that hold you in place better around corners, and a three-spoke, leather-trimmed steering wheel.

The Cooper S also rolls on bigger, 17-inch wheels, shod with tyres of a lower profile (which bring more grip).

And you get three driving modes, which let you adjust the accelerator response while you’re driving. A rotary switch at the base of the gear selector allows you to choose Green (for a lazy response and better fuel economy), Sport (for a more energetic response, or Mid (which is in-between).

A wide range of option packages is available for both Clubmans, which add styling touches and equipment. Popular packages include Multimedia Pro, which brings a bigger (8.8-inch) multimedia screen, a 12-speaker sound system with digital radio, and a head-up-display, which projects speed and navigation details onto a small screen just above the steering wheel. This helps you keep your eyes on the road.

A Driver Assistant Package gets you some camera-based safety systems. One is radar cruise control, which slows you to the speed of a vehicle ahead. Another is automatic emergency braking, which works at city speeds: it will help brake the car if it sees a looming collision before you do. A third is high-beam assist, which dims the headlights automatically if it detects an approaching vehicle at night.

Another key option, available on either model for less than $1000, is adaptive dampers. This allows you to adjust from the cabin how the suspension responds to bumps: more stiffly, for improved handling, or more softly, for greater comfort on bumpy roads.

Expand Section
The downside is mainly how fast the optional equipment packages drive up the cost of the car. Package prices range from a bit more than $2000 to well over $6000. Combining two or three packages can quickly push you to a price point where more choices from other makers become available.

The ride is bumpier on the 17-inch wheels and lower-profile tyres of the Cooper S, because there is less cushioning air between the wheels and the road.

How comfortable is the Mini Clubman?

Expand Section
Compared with a regular five-door Mini hatch, the Clubman is 27cm longer, 9cm wider, and has 10cm more space between the front and rear axles. Interior space is generous, with Mini making the most of the larger dimensions.

The front seats are comfortable and the entire cabin is roomy, which makes it feel not so … mini. The interior also feels well-made and is full of Mini styling touches. However, some plastics are hard and of poorer quality than plastics in alternatives such as the Audi A3 and Volkswagen Golf.

The run-flat tyres deliver a lot of tyre noise on coarse chip roads, and on rough roads the standard suspension feels firm and unsettled. Paying extra for the optional adaptive dampers is money well spent. On smooth roads, however, the Clubman is reasonably quiet inside.

The split rear doors inhibit rear visibility, due to the large join in the middle of the rear window.

What about safety in a Clubman?

(To see a list of the safety features on any model, open the model from the Cars Covered By This Review dropdown near the top of this page, and look under the features tab. Safety-related features are listed in red.)

The Australasian New Car Assessment Program (ANCAP) has not rated the Clubman.

Expand Section
Minis are known for their go-kart-like handling and the new Clubman is no exception. Keen drivers will appreciate the sharp steering, the balanced chassis, and the positive front axle that helps you turn into corners quickly, provides a good amount of grip and inspires confidence.

The Clubman’s longer wheelbase helps it feel more composed and stable, when driven hard, than the more skittish Mini five and three-door hatches.

The Cooper S is the more engaging of the two Clubman variants, thanks to its rortier 2.0-litre engine, greater grip, and an exhaust note that in Sport mode cracks and pops on overrun.

Expand Section
Spacious and comfortable, even if the back seat is not as big as it looks. Mini is stretching the truth in claiming that the rear bench is big enough for three adults. However, two adults and a child will fit easily, thanks to ample knee room even for tall people.

The main complaints are insufficient thigh support and no central rear rest (although this can be added as an option).

The seat is set high, which improves outward vision. And rear passengers get dedicated air-conditioning vents.

Expand Section
The new Clubman’s boot measures 360 litres, which is on the small side for this class. For comparison a Volkswagen Golf’s boot volume is 380 litres.

Folding the Clubman’s 60:40 split rear seats boosts space to 1250 litres. You can option a 40:20:40 split rear seat, which allows you to fold just the centre section if you need to carry long, thin items and passengers at the same time.

Where is the Mini Clubman made?

Expand Section
The Mini Clubman is made in Oxford, England.

Expand Section
Perhaps a better trimmed cabin. While its interior is quirky and comfortable, some of the Clubman’s cabin materials feel hard and cheap. As a whole, the Clubman’s cabin can’t match the quality, luxurious feel or design execution of the similarly priced Audi A3 and Volkswagen Golf.

And even though keen drivers will enjoy the Clubman’s sharp dynamics, particularly in the Cooper S, it’s still not as fun or as engaging as some other performance-focused hatches, such as the Volkswagen Golf GTI.

Expand Section
Drivers seeking the most engaging and sporty experience should opt for the Cooper S Clubman.

However, the cheaper Cooper Clubman is arguably the sweeter car. Its three-cylinder engine is strong and more fuel-efficient, and the ride on its smaller 16-inch wheels is more comfortable and supple. To improve the comfort even further, pay the extra for the adaptive dampers. We’d opt for the base Cooper with adaptive dampers.

Are there plans to update the Clubman soon?

Expand Section
No, the Clubman is a new generation vehicle. However, Mini does plan to add variants in 2016. An even more powerful and sportier John Cooper Works version is likely, and Mini Australia is considering the diesel-powered Cooper D Clubman, which is available overseas. 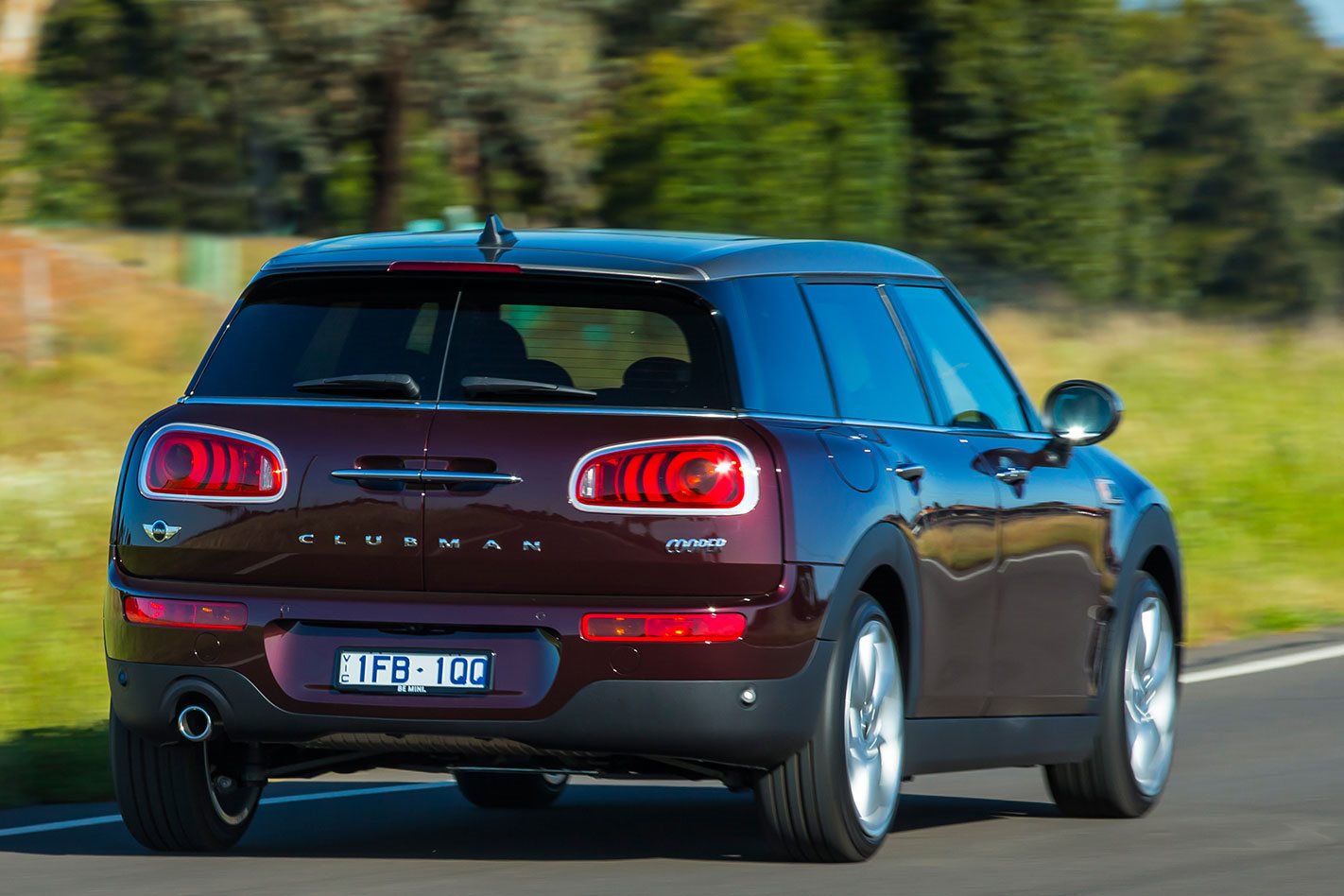 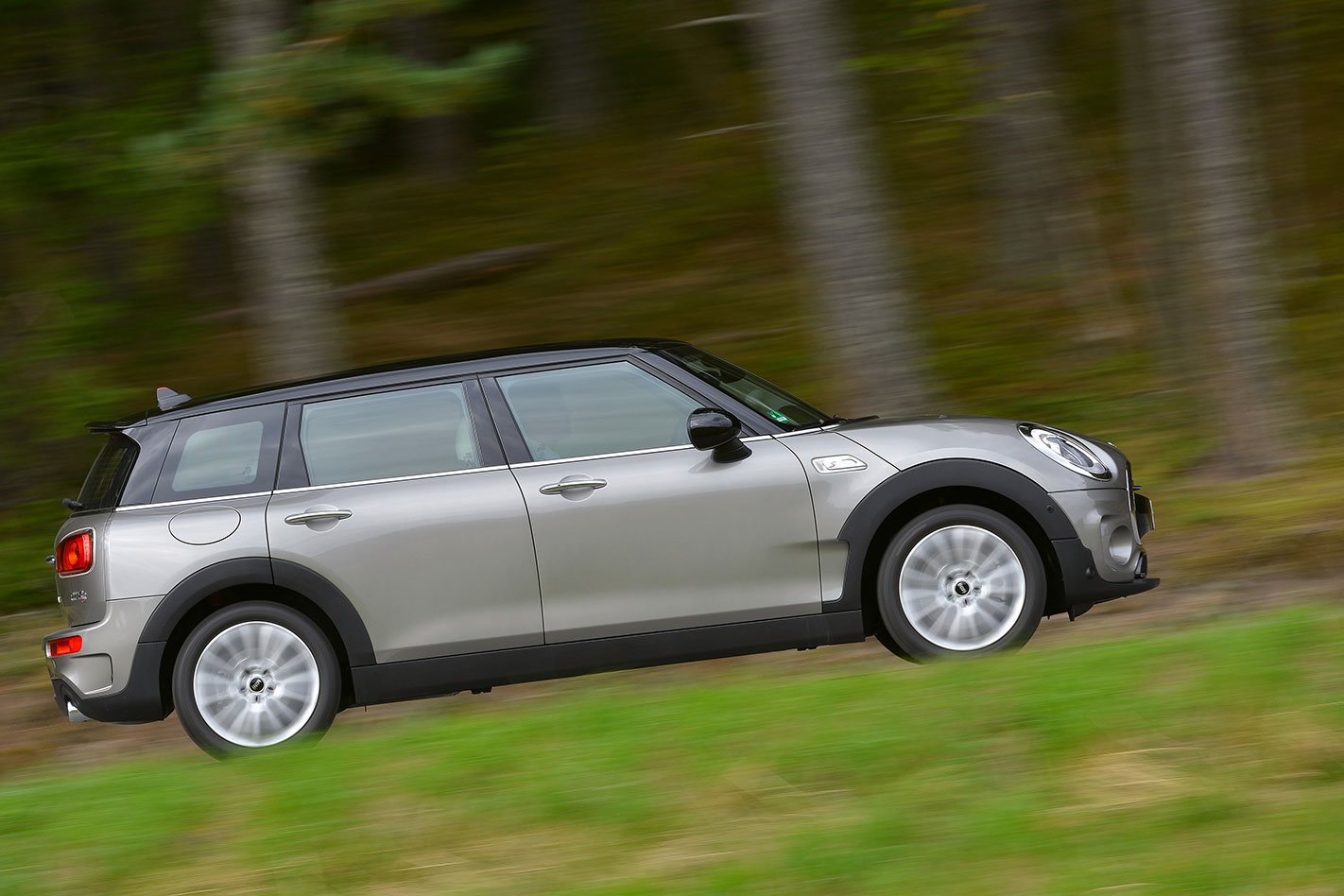 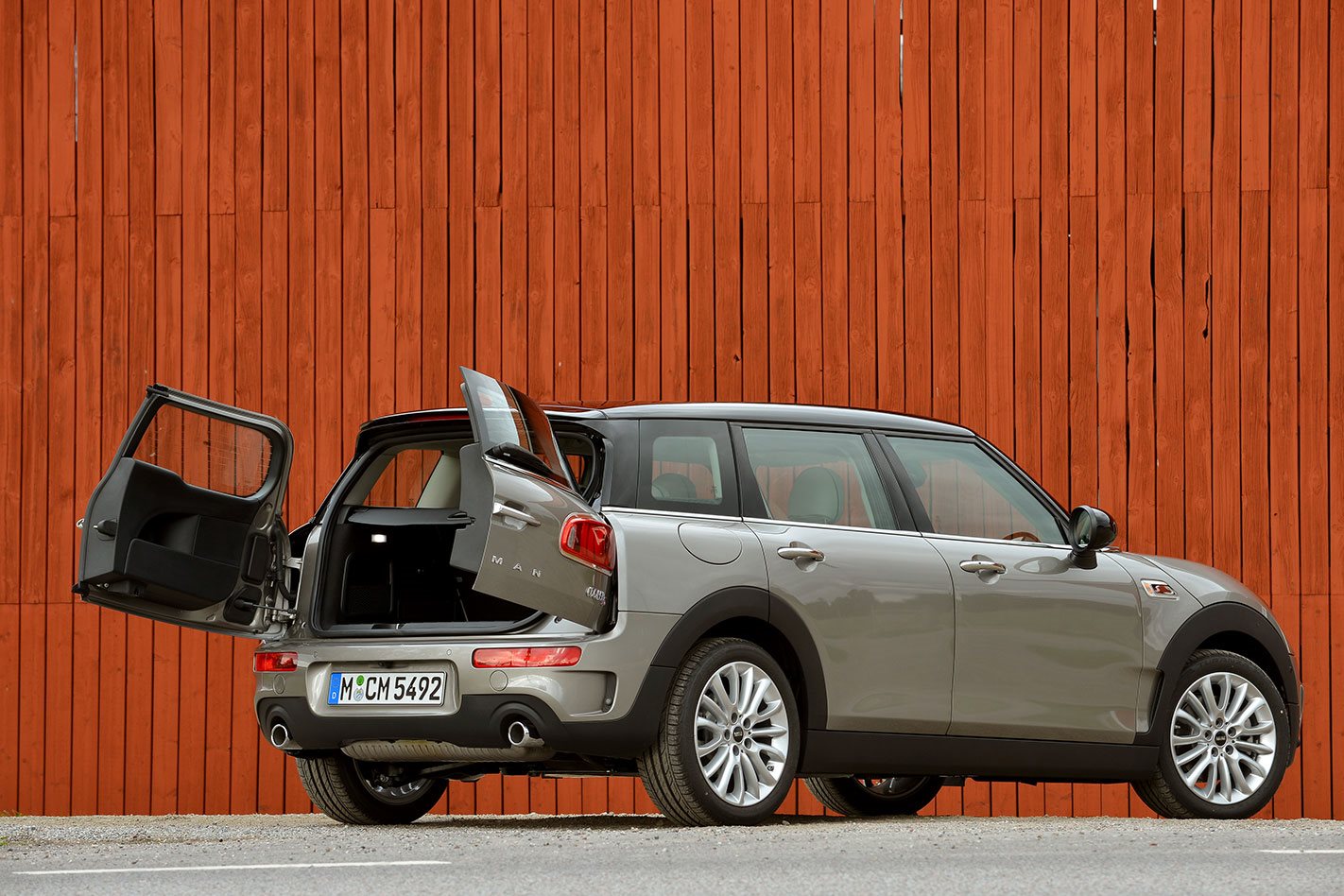 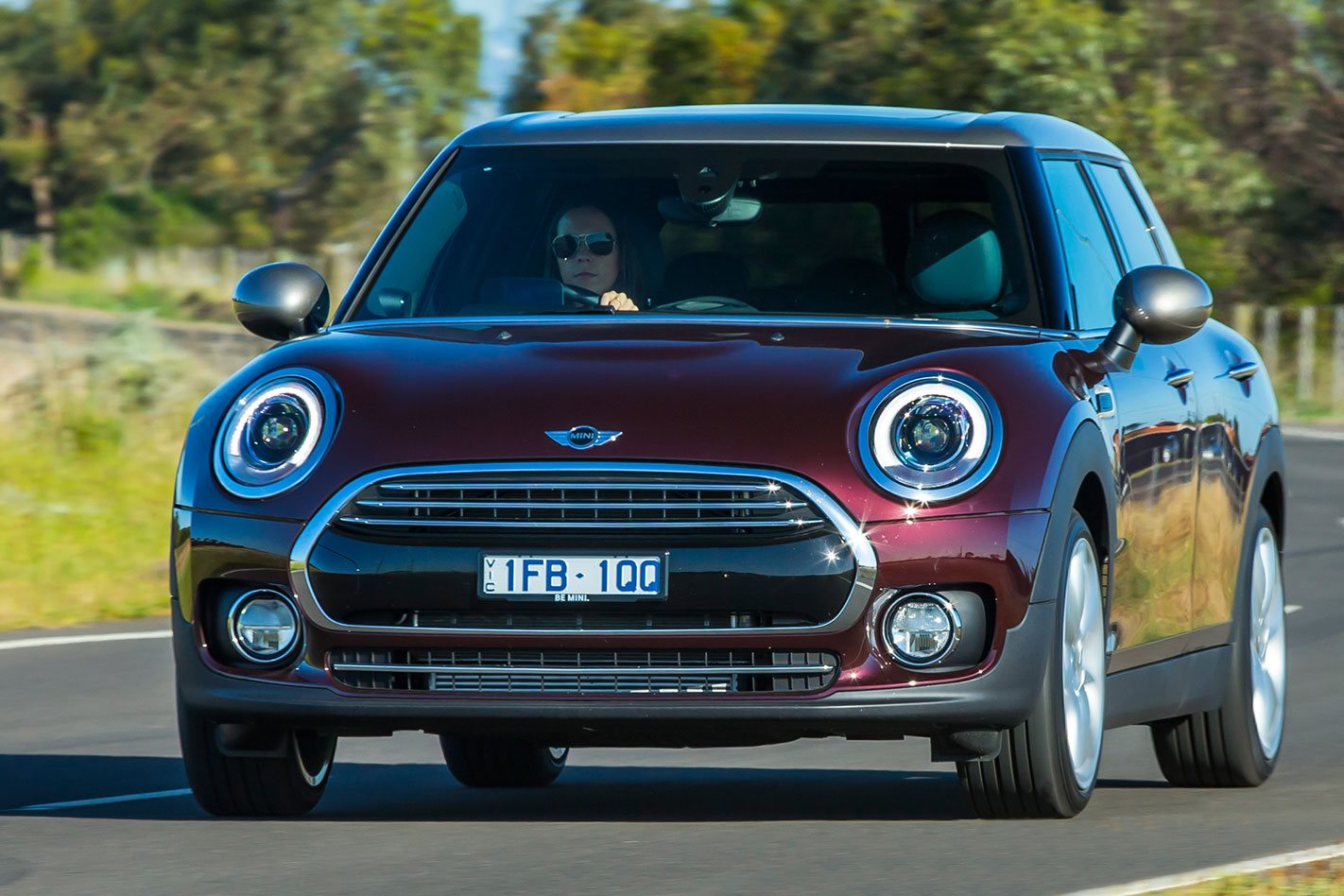