THE Volkswagen Tiguan is the first of five new SUVs that the German semi-premium brand plans to launch in Australia in the not-too-distant future.

The Tiguan is VW’s second best-selling model behind the Golf hatchback and wagon range, taking on the likes of the soon-to-be-updated market leader, the Mazda CX-5.

It performed highly in the 2017 Wheels Car of the Year awards, passing through to the second round, as one of six vehicles selected from 26 hopefuls. The range starts with the $31,990 Volkswagen Tiguan 110 TSI Trendline, the only model to drive only the front wheels via either a six-speed manual or dual-clutch transmission. Its equipment list is basic compared with the rest of the model line-up, running to manual control air-conditioning, cruise control with a speed limiter, black roof rails, tinted glass, and 17-inch alloy wheels.

All cars get an armrest in between the front seats, a leather-wrapped steering wheel with controls for the audio, phone and cruise control functions, the headlights stay on at night until you’re safely indoors, and the radio is controlled via an eight-inch monochrome touchscreen with a USB connection. The supportive seats are cloth-covered.

In the boot, there are hooks for shopping, a light, and a removable cargo cover. 110 TSI sends drive to the front wheels via a 1.4-litre turbocharged four-cylinder engine producing 110kW and 250Nm, with an appetite for 95 RON premium unleaded fuel.

Spending an extra $5000 will lift the 110 TSI to Comfortline specification and add a six-speed dual-clutch transmission.

Over the Comfortline, it adds better front-seat headrests and lumbar adjustment for the seats, a storage drawer under the driver’s seat, front fog lamps, more flashes of chrome inside and around the body, chrome-look roof rails, different-look 17-inch alloys, a rear-seat central armrest with two cupholders, folding tables and pockets on the front seatbacks, satellite navigation, rear-seat reading lights and extra lighting in the footwell, a luggage net for the boot, and more storage in an overhead console. The touchscreen adds colour. 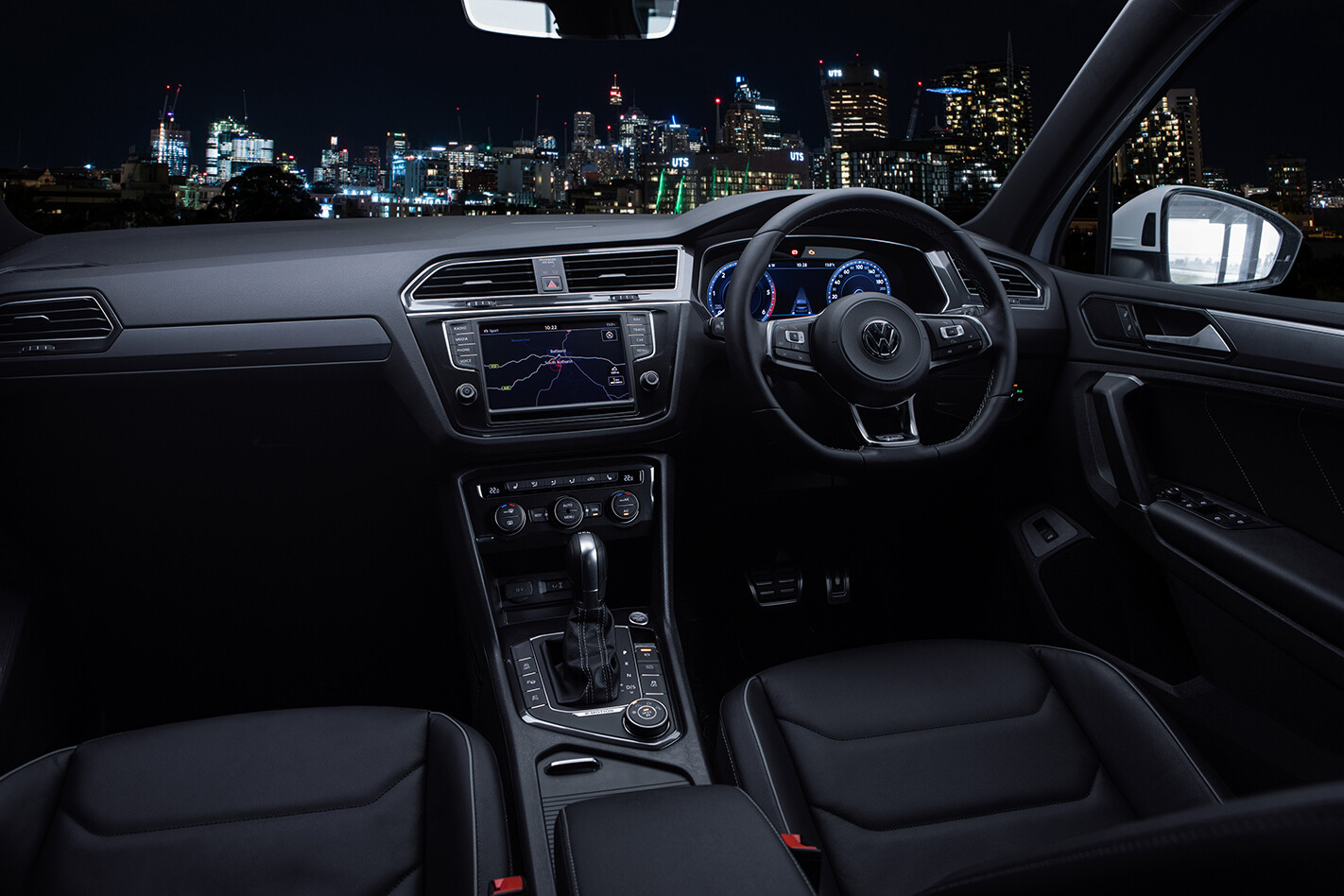 The $48,490 162TSI Highline steps up to a 162kW/350Nm version of the 2.0-litre four. Highline adds more premium LED tail-lights, even more chrome highlights outside, more stylish trapezoidal exhaust tips, darker window tinting, and larger 18-inch alloys. The headlights step up to LEDs, the superior audio system adds 10GB of storage and will accept voice commands, and the boot adds an electrically opening and closing tailgate. The steering wheel adds shift paddles, and you sit on electrically adjusted leather rather than manual-adjust cloth.

Topping the range is the $49,990 140TDI Highline that uses a 140kW/400Nm 2.0-litre diesel four-cylinder engine. It misses out on the fancy exhausts of its petrol-powered sibling.

No Tiguan comes standard with a sunroof; instead you have to either add it as part of a package for Comfortline and Trendline models, or as an optional extra on the Highline.

All variants get a reversing camera, automated emergency braking, seven airbags, and a bonnet that’s more kind to any pedestrian that strays in front of the car. The rear seats have air vents, and the door pockets are flock-lined to stop rattling. 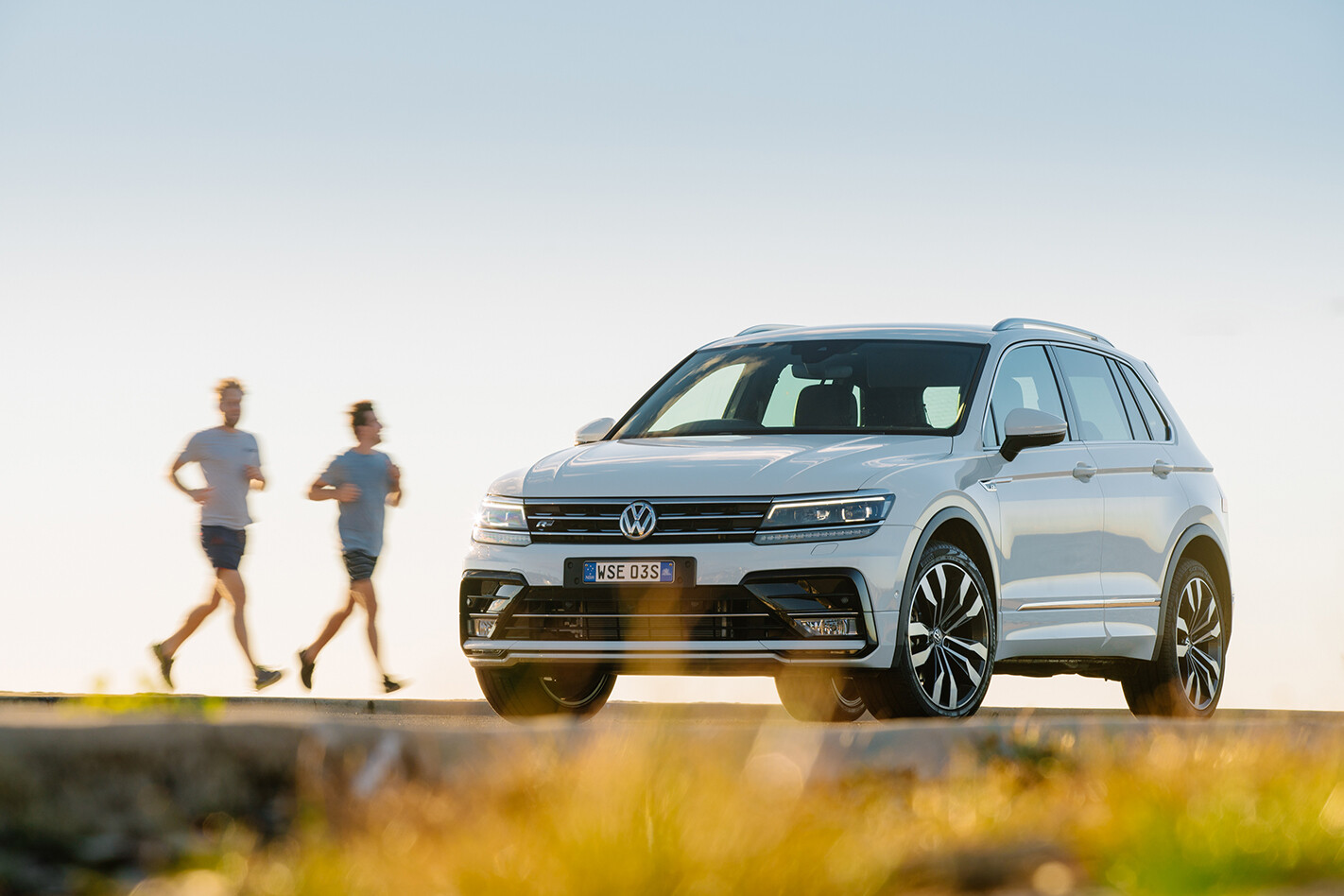 Pros and cons
The old Tiguan, which was based on the Volkswagen Golf, had a tight interior and a small boot. The new model is larger in every dimension and rides on a longer wheelbase, improving passenger space and comfort. It has also boosted the Tiguan’s 615L boot to one of the largest in class with the sliding second row all the way forward.

It’s now much better-handling, too. The top-spec 162TSI uses the same engine as the Volkswagen Golf GTI hot hatch. Inside, the cabin is a lot more premium than some of the Tiguan’s competitors.

One downside is the price of the Tiguan, which pushes it firmly into premium territory; you’re paying a competitor’s all-wheel-drive money for the entry-level, front-drive Volkswagen Tiguan. A sunroof is a $5000 option on some models because it is tied in with a package.

The ride, too, borders on rough. It does get better if you spend $4000 on the R-Line package only available on the highest-priced Highlines.

The one to get
The 132TSI Comfortline is the volume model for Volkswagen, and for good reason. The 2.0-litre engine lacks any obvious weakness, it’s economical and powerful enough to tackle city traffic with relative ease. There’s no point in chasing comfort unless you have a lot to spend: you don’t get electric seat adjustment until you’re spending north of $48K, which is a big leap compared with its rivals, so stick with the value model.