Our lifestyle editor took an Audi TT Roadster to the Western Bulldogs’ best and fairest function at Crown Casino. Did it live up to her expectations?

In one hand I had the keys to the Audi TT Roadster; in the other I was holding a ticket to the Western Bulldogs’ Charles Sutton Medal (for non-Victorians, it’s an AFL club’s best and fairest award). It was my night to shine and play ‘WAG’, except I wasn’t a wife or girlfriend; I was a guest of staff.

While my fellow WAGs spent their nights trawling the internet looking for the perfect designer dress, making Pinterest folders for possible hairstyles and ruthlessly exfoliating their skin in preparation for a fake tan, I tossed and turned trying to decide which car I was going to drive through Crown Casino’s valet.

I decided on an Audi TT Roadster, with the approval from several of my colleagues who told me it was the ‘perfect fit’ – Cinderella might have had the glass slipper, but I’ll take the TT Roadster over a pumpkin carriage any day. 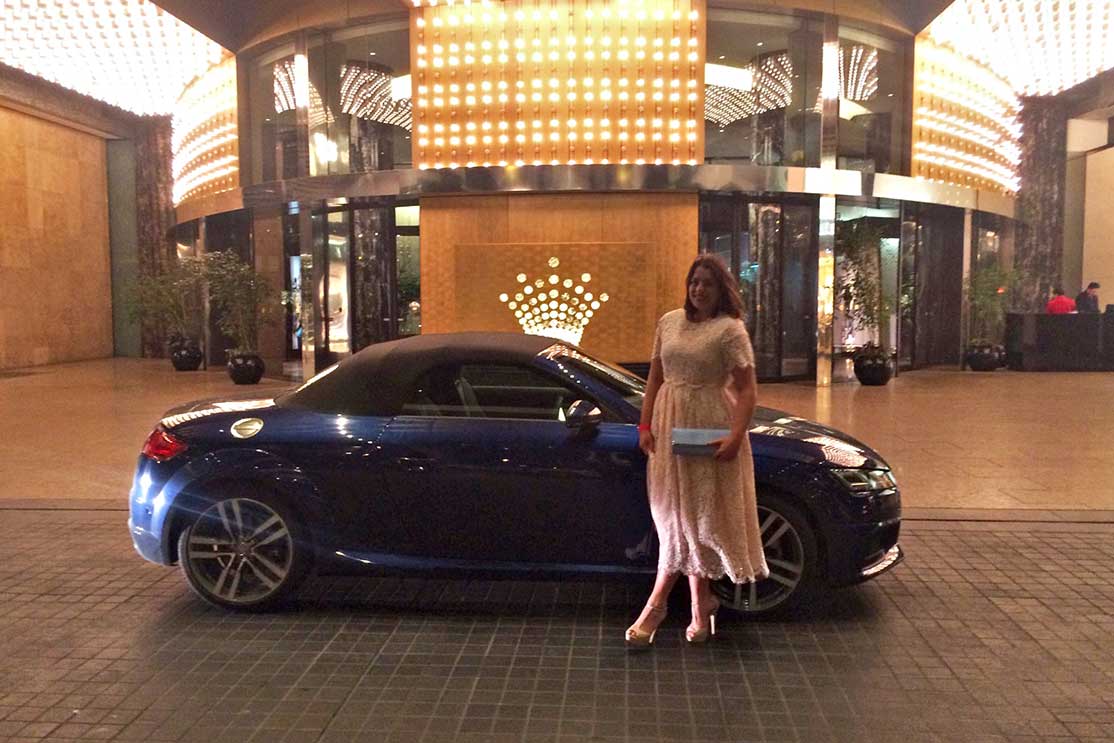 Thank you to the valet who insisted on taking photos! #noselfie

Surely if Cinderella could win a prince with a pumpkin, I could do the same with an Audi TT Roadster. If I could just act cool for one night and slip the TT’s facts and figures into a conversation with one of the footballers, it might lead to a walk on the Brownlow Medal red carpet next year. And if I failed, well, that was fine too, because I have never really wanted to be a WAG anyway.

Prospective romance aside, the biggest attraction of my blue steed was its convertible-ness – it was my real old-Hollywood moment. Except I didn’t have a silk scarf wrapped around my hair, driving gloves protecting my manicured fingers or glasses preventing my make-up from running – no matter, what could possibly go wrong driving a roofless car around Melbourne? Plenty.

I learnt a very valuable lesson that night: Convertibles are like a pair of stilettos; they look great and make you stand proud, but they’re bloody inconvenient and uncomfortable.

Having toured around in a series of big SUVs in previous weeks, it took me a while to get used to the TT. I was no longer the king of the road looking down on people; I was now looking up at them. The TT Roadster was so low to the ground. Not only did this make getting in and out of the car with our skirts hitched to our waists an adventure, but it also meant visibility was pretty average. Throw in a blacked-out soft-top with a small rear-window and you’ve got yourself a pretty stressful on-road experience. Putting the roof down helped and was a novelty I was keen to make the most of, but once twilight arrived the sun started to play havoc – without the roof there was nothing to shield my eyes. 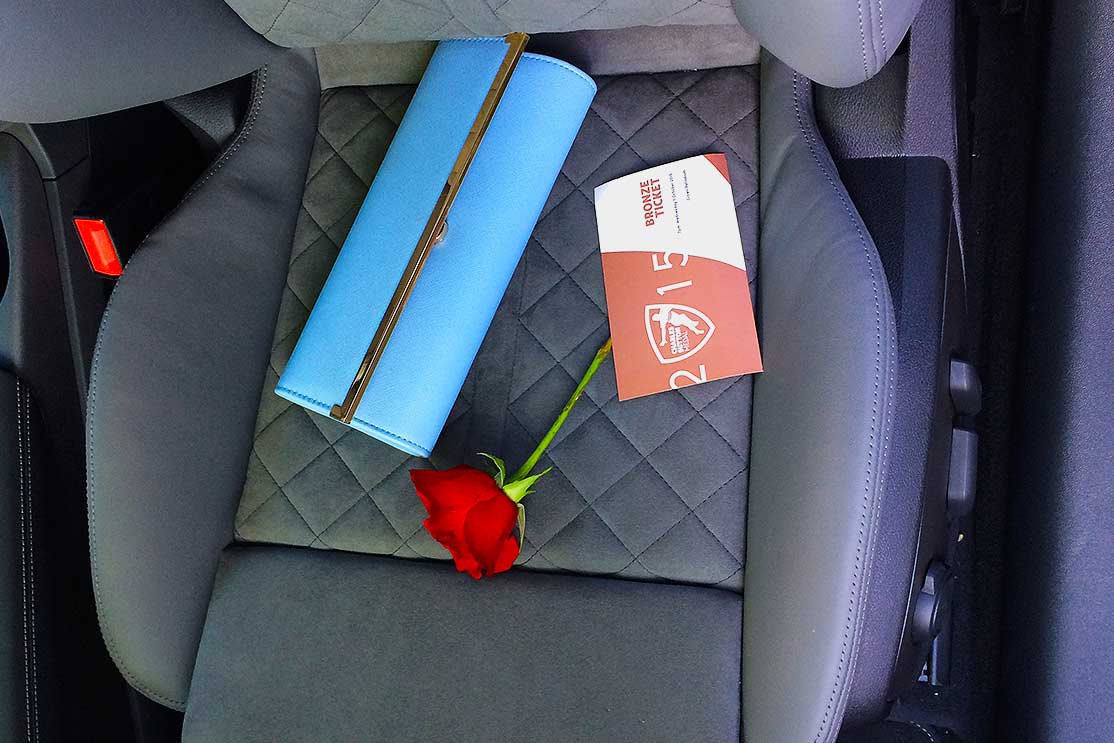 With very little space in the cabin, a girl has to find somewhere to store all of her things.

On the road, the TT makes a beautiful revving sound and steers as you’d imagine a sports car should. It’s hard not to get caught up in the hype and suddenly start visualising yourself on a racetrack… in a dress.

When I finally arrived at Crown Casino my hair was no longer the same as when I’d last looked in the mirror, my mascara had started to leak, and I was so cold I was going to be drawing attention to the wrong kind of headlights. Thank God for the TT Roadster’s heated seats and neck vents; one of the best car features… ever!

The event was glamorous and I was surrounded by AFL athletes and dedicated fans. It was a Hollywood night – minus the paycheque, the expensive super-lux gown… and the actors. Unfortunately, even with my pretty new dress and suave sports car, I didn’t get my WAG ending, despite all efforts.

I thought, “I drove here in the Audi TT Roadster. It’s a pretty cool car”, would win some brownie points. Instead, I was greeted with unimpressed smirks and comments like: “Oh that’s a hairdresser’s car. It suits you”. #facepalm. 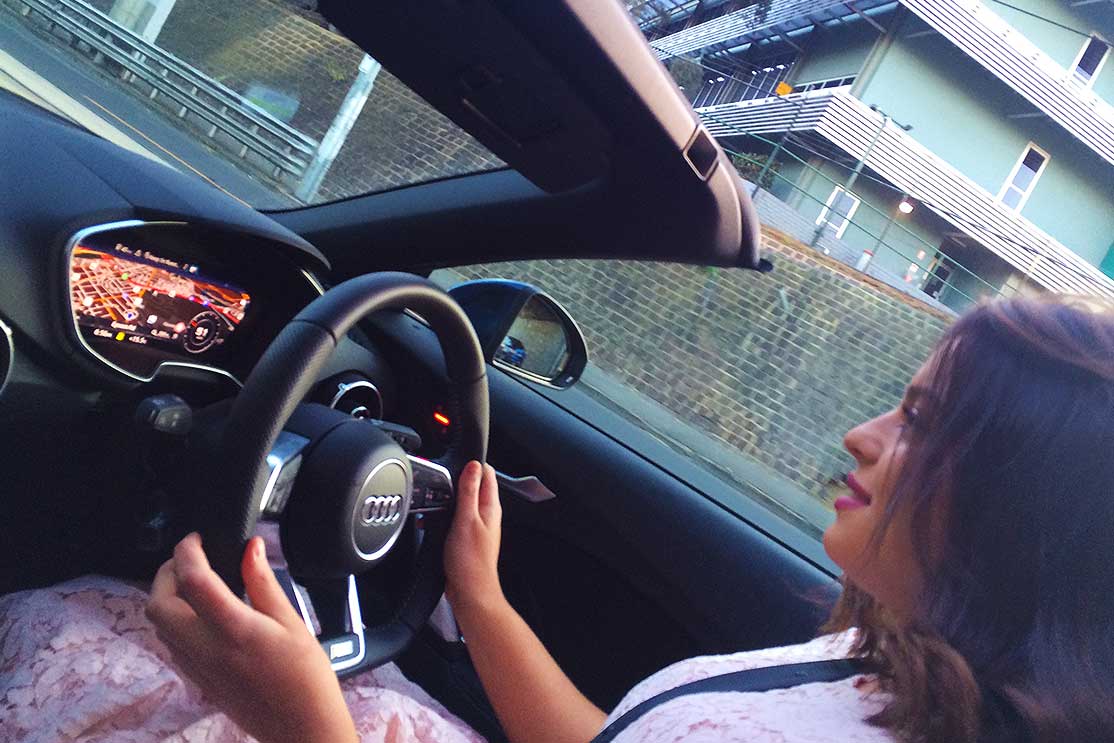 But who cares what they think anyway. When it comes down to it, the Audi TT Roadster is a fun car to drive. Sure, it can be impractical, but that’s not unusual for a convertible.

It’s invisible to absent-minded drivers, there’s very little cabin space, and it’s not as fast as some of its competitors. If you love the polished look of the TT Roadster, however, none of that is going to bother you. It looks cool, puts a smile on your face, the fabric roof folds down in 10 seconds at any speed up to 50km/h, and it has decent cargo space. When I drove to the office the next morning, my boot was decked out with all things girly. The boys weren’t too impressed by my wardrobe loaded into the back, but a girl’s got to have options for such a big night.

Okay, so I wasn’t the talk of the night. That honour went to the handsome, sweet-talking Easton Wood, who made a speech so beautiful you could see the melting hearts of every lady in the room. Nor did I manage to have players lining up for a few laps around Crown in the TT. But given most of them are nearly a decade younger than me, I wasn’t too disappointed.

But hey, shout out to the wonderful valet who delivered the Audi at the end of the night. He said he loved the car, called me beautiful and then offered to take some photos outside the casino. You, sir, are a legend!