Road trip: Sydney to Melbourne via the coast

Two years ago my wife and I packed up and moved our lives from Sydney to Melbourne. Since then the Hume Highway has vaporised more hours of our lives than I care to count. It is a deathly boring commute, and one that we find ourselves doing several times a year.

The Hume is, for the most part, an extremely efficient way to travel a long distance. Efficient is another word for boring. It’s 800-odd-km of blacktop with two lanes in each direction; lanes that bypass every little town along the way rendering the road devoid of all character and charm. It may be the fastest way to get the job done (in a car) but it’s still a full day of point and click monotony, and life is too short for road trips like that. 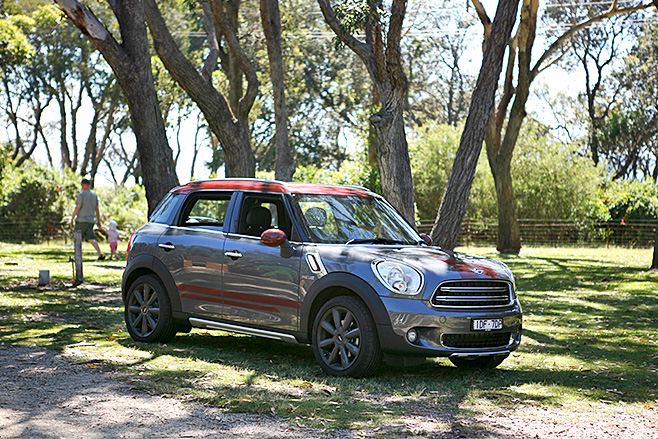 So on our most recent sojourn up the Hume to visit our families, the decision was made to spend an extra day travelling home. We wanted to drive as much of the coast road as possible, stopping along the way to soak in the sights. It was beautiful.

This is how we did it.

Setting off from Sydney’s north-western suburbs, we picked a route to the southern end of town that would get us out of the thick of things as quickly as possible. Part of taking the slow road home involves getting out of the hustle and bustle as a matter of urgency.

We were driving a MINI Cooper Countryman, a car that loves twists and turns, so I made it a high priority to take the route through the Royal National Park. Once you reach the outskirts of Sydney, signs appear for the Grand Pacific Drive. Following that little logo is your ticket to a gorgeous day or two on the road. 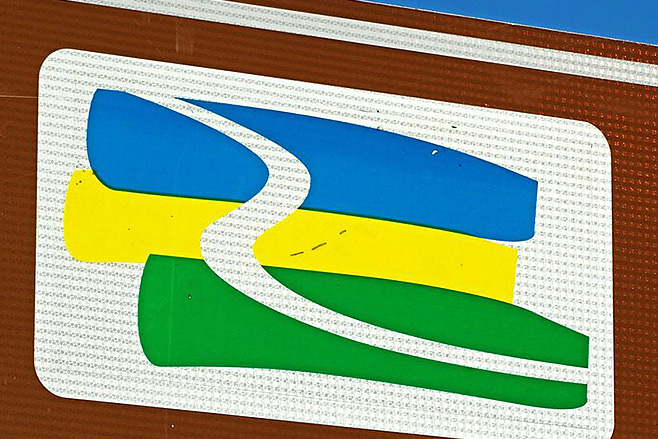 Breaking out from the greenery that is the Royal National Park you’ll soon arrive at Stanwell Park. The lookout point at the top of the cliff is worth stopping for. Hang gliders love the area so keep an eye out for anything colourful soaring overhead. 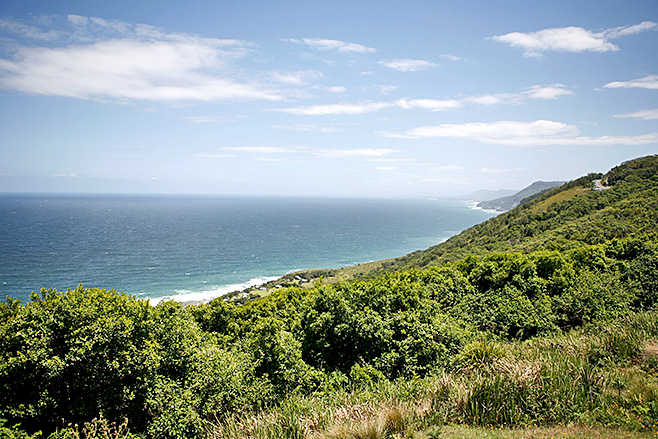 Hop back on the scenic route and the next landmark isn’t something by the side of the road, it is the road. The Sea Cliff Bridge has been made famous by numerous TV commercials and magazine photo shoots. It’s an utterly stunning monument and a magnificent engineering feat. 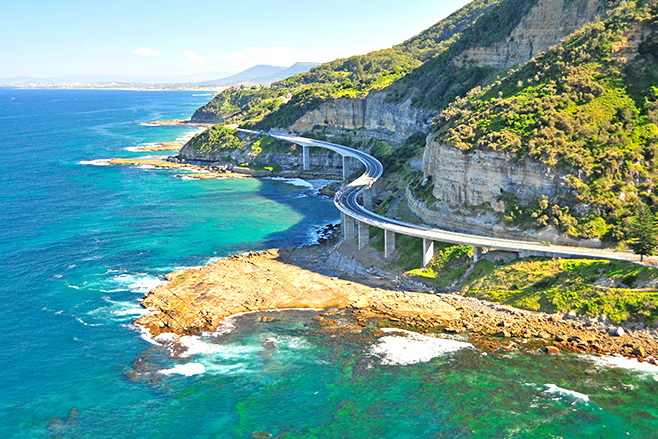 A bit further down the road is the now closed Imperial Hotel sitting in a prime location high above the water’s edge. It’s a beautiful old building that’s begging to be repurposed.

Next stop is Scarborough. If you’re anything like us, you’ll have left later than planned so the Scarborough Hotel is an ideal spot to stop for a tasty bistro lunch.

Head out of Scarborough and you’re winding your way past the south coast’s stunning sandy shores. Coledale is a personal favourite with its beach-side campsites fronting right up to the surf. The sand is mere metres from the zipper on your tent. The Coledale RSL is another good food option if you’re feeling peckish. 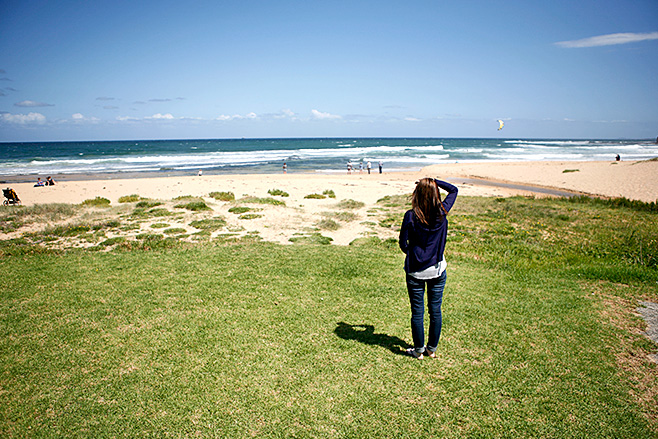 After passing Austinmer beach, Grand Pacific Drive moves away from the edge of the coastline to take you through Thirroul, home to a handful of very sweet coffee shops.

Wollongong is getting close by now and the traffic may start to reflect that. Wollongong is the best place to stop if you need to get any supplies that may be harder to find in quieter towns.

Out the other side of the ‘Gong the view over the water from Bombo and Kiama will be all the reward you need to say thanks to yourself for taking this route. What a gorgeous part of the world.

Before long you’ll hit Berry, one of the cutest towns on this whole drive, though not one that is equipped to deal with high volumes of holiday traffic. It was packed the day we drove in and I was glad to in the little Countryman and able to nab a small carpark on the street. The wait to get into Berry is worth it, if only to devour a couple of outrageously delicious donuts from The Famous Berry Donut Van. You can’t miss it. 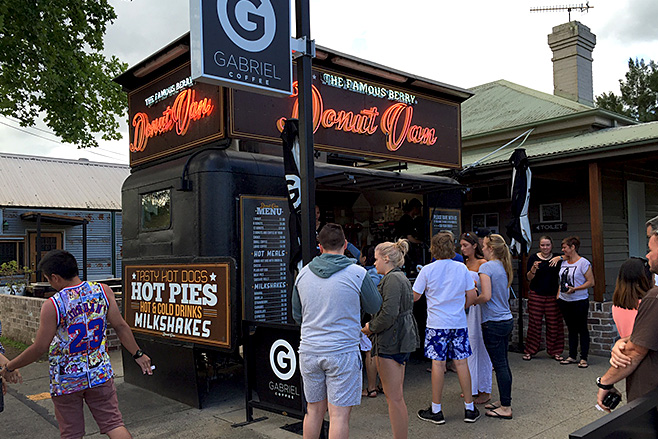 By 2018 Berry will be bypassed which is a shame. It will ease the long delays that often happen but we can’t help but think that once there’s a road around it, most will drive right by. My wife and I plan to make a point of stopping at Berry as often as possible.

If you’ve stopped as many times by now as we had, you’ll notice that the day is starting to get away from you. We enjoyed most of the next leg from inside the car at 100km/h. We were trying to get to Bega at a reasonable hour to get a good night’s sleep. The MINI was more than comfortable to cruise at the speed limit with the AC blasting and the boot fully loaded with gear, including a timber double bed frame my old man surprised us with in Sydney! Yep, I was surprised by the boot size of the Countryman as well.

Nowra is one of the larger townships on the drive and the next major area of interest. It’s the centre of a big farming community and dairy industry. About 20kms south of Nowra the A1 Highway feeds you through a magnificent section of national park and state forest. 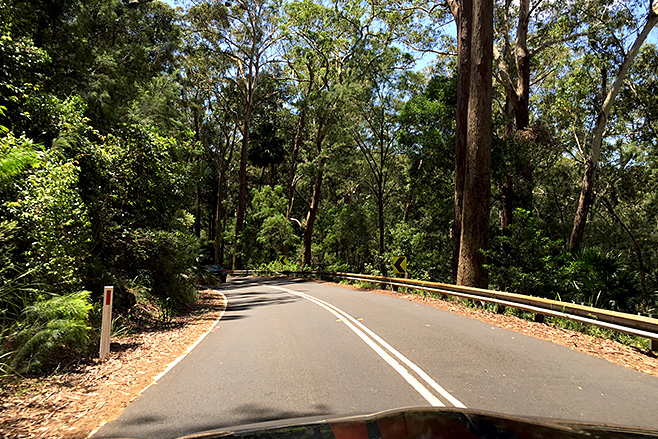 Take it in for a moment then ready yourself for more sprawling ocean vistas from Ulladulla, an extremely popular spot for holidaymakers in search of Vitamin D.

Follow the 100km/h single lane highway for another hour and you’ll land in Bateman’s Bay. Overtaking lanes on this stretch are sparse, so don’t get stuck behind a caravan leaving Ulladulla!

Batemans Bay was our dinner stop. We chose Thai food from Eat at Siam, a waterfront restaurant sitting above a pizza shop. Eating on the first floor balcony as the sun set over the water felt like a scene from a much more expensive restaurant. Recommended. 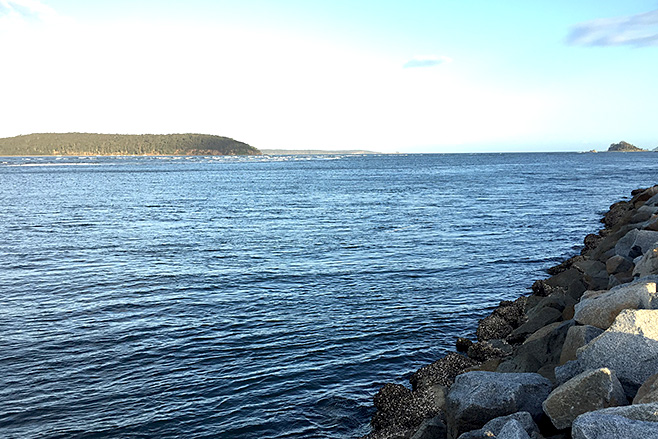 With our bellies topped up we waved goodbye to Batemans Bay and hit the uphill and downhill twists and turns to Bega. As the halfway point of this coastal trip between Sydney and Melbourne, Bega has a huge range of accommodation options. It’s worth planning in advance and finding a room early as the whole town books up fast in peak times.

We woke up in Bega on a public holiday and the main street was a ghost town. Usually there is a choice of breakfast café options within walking distance of each other. We were keen on Red Café which caters to a wide range of dietary needs. Sadly, we couldn’t try any of them on the day we were there, so we hit the road to Eden.

The route to Melbourne takes a surprise turnoff outside Bega. The main road out of Bega continues to the coastline, but our path heads off to the right. Don't miss the sign or you'll end up in Merimbula, which actually wouldn't be all that bad. 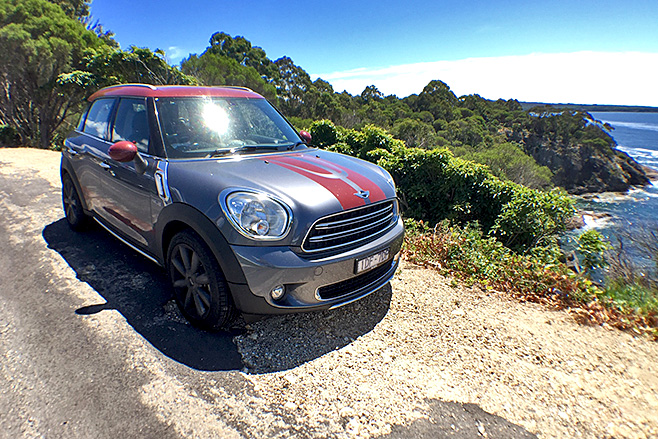 Getting to Eden takes you through quaint little Pambula, a tiny settlement with a nearby wetland area containing fresh water billabongs, walking and bicycle tracks and picnic areas.

Pretty soon you’re in beautiful Eden. The ‘Garden of Eden Caravan Park’ will let you know you’ve arrived. Hey, someone had to do it. Eden is a fairly significant hub on the far south coast, very nearly on the border but just inside New South Wales. 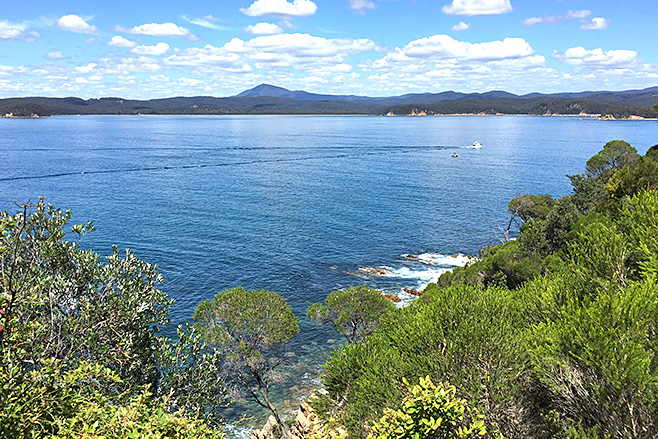 Spend some time in Eden. The headland lookout is truly breathtaking and known as a prime whale watching location. If you’re hungry, like we were, Sprout Café gets a big tick from us. The food is delicious and the coffee, made with local milk, is outstanding. It’ll be the coffee you think of most when you remember your time there.

Jump back on the tourist drive and follow the signs to Melbourne. This bit of the drive is a fair way inland compared to the road so far, but the thick bushland and forest is just as pretty to look at. If you’re a keen driver you will lap up this part of the journey. The road bends a line beautifully across the bottom corner of the country, and if you’re driving something that enjoys a spirited squeeze you will love the next stretch. Our MINI was perfect in its balance of long haul practicality and cornering prowess, approaching the road with the same level of enthusiasm as I did. Less than 50km from Eden is the state border. 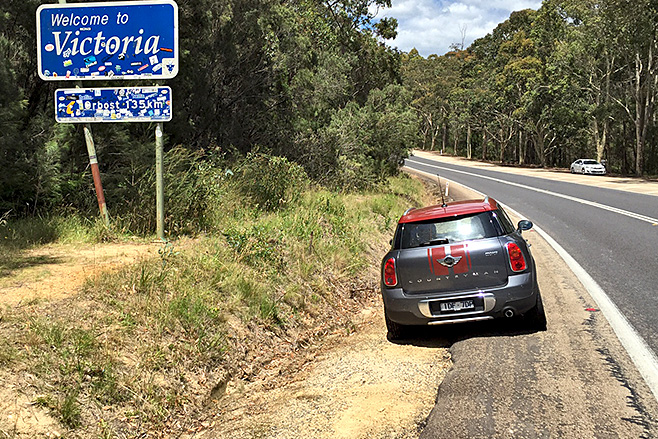 Not too much driving left now! Keep rolling to Cann River, from there you can choose to snake your way along the water’s edge some more by turning off to Cape Conran and Marlo, or you can continue on the A1 to Orbost.

This bit of the drive is where I realised how relaxing the coastal route had been compared to using the Hume. There are almost no big trucks at any point, especially in this south-eastern corner. I could count the number of heavy commercial vehicles on one hand. The only slow movers to contend with are the odd campervan or farmer.

It’s important to try and get your touring done during daylight hours. Kangaroos are more of a risk on this road at the best of times, but much more so at night. That’s not mentioning the fact the views are better and that driving during the day is less fatiguing. 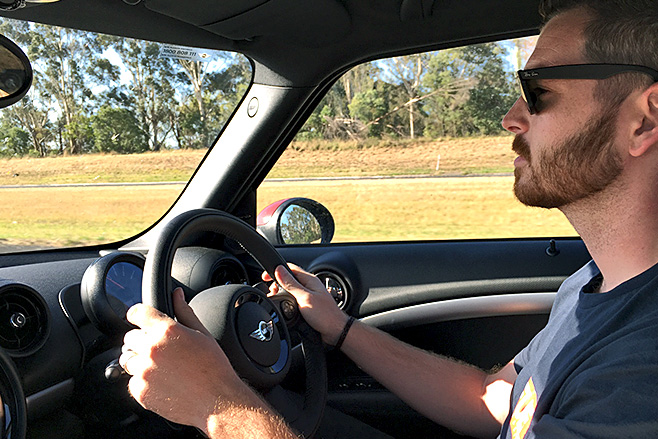 Regardless of which option you took above, the roads meet at Orbost and cross the Snowy River. A string of tiny, mostly abandoned hamlets lie on the road out of Orbost. The next town of significance is Lakes Entrance.

Lakes Entrance is an excellent stop. We chose to grab lunch here and do a little bit of seaside shopping. There is plenty of car parking and the park area near the water often has some sort of community event going on at the weekend.

If you have time, take a moment to enjoy the picturesque lookouts along the road toward the Gippsland area. Bairnsdale is the first major urban area in East Gippsland and a charming spot in its own right. It is home to two wildlife reserves that provide habitat for a varied selection of threatened fauna and flora species. 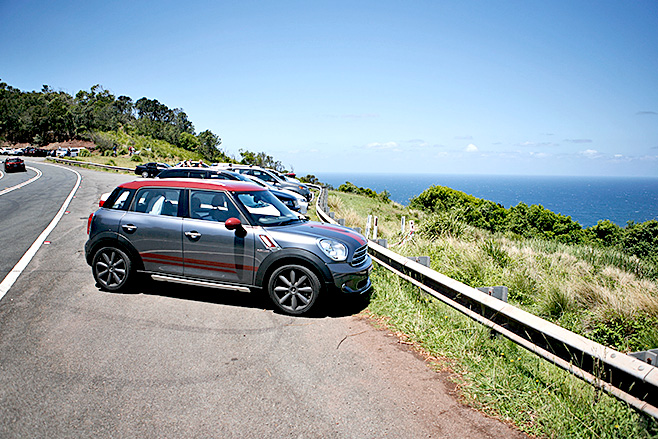 The A1 will feed you into Sale next. By now Melbourne isn’t too far away, and with almost 1000kms behind you I’ll bet you’re just about ready to be there.

From just outside Rosedale the single lane highway you’ve been following widens out into dual carriageway. But it doesn’t last for long. Stay the course a little longer and on the other side of Traralgon if opens up for the final stretch into Melbourne. 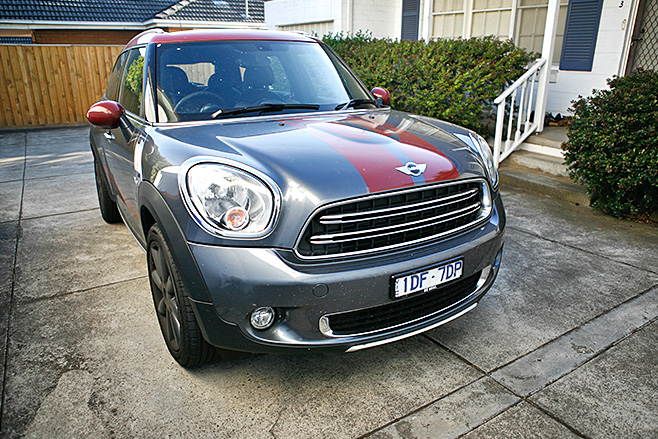 All up, taking the coastal road adds roughly 150kms and four hours of driving to the journey when compared to using the Hume Highway. Yes, it’s just too much to make it unfeasible for a single day of travelling, whereas the Hume can get you between Sydney and Melbourne in one (long) day. Trouble is, taking the Hume means missing out on all of what Australia’s south-eastern coast has to offer – which is a lot! We urge you to give the road less travelled a chance. It’s the better way to get where you need to go.