There’s no question that motorsport is one of the largest male dominated sports on the planet. And while the divide between women and men in the motoring industry is still at large, there’s a deep seeded history of women in the motorsport world stepping up to the plate, or in this case, the steering wheel. From NASCAR, NHRA and Formula One, women are making an impact – all be it a very slow and challenging race to equality at the finish line.

So, with March 8 the day to celebrate all women everywhere for International Women’s Day, we decided to take a look at the stories of some of the women in motorsport – and in particular, the fiercely competitive Formula One.

HISTORY OF WOMEN IN MOTORSPORT

There is a long history of women in motorsports dating back to the early 1900s. Since French Camille du Gast was the first woman to race at an international level consistently, there have been many women to attempt the male-dominated sport.

Elizabeth Junek (Eliška Junková) raced for the first time on her own in 1923 – a year after her and her husband, Vincenc Junek, bought a Bugatti Type 30 which her husband raced and Elizabeth served as a mechanic until he hurt his hand and gave Elizabeth the wheel. Elizabeth spent the next five years racing with a couple of wins and even more close calls. The racing ended in 1928 when Vincenc was tragically killed at the German Grand Prix while driving their Bugatti Type 35B and Elizabeth decided to retire as a result.

Maria Teresa de Filippis was the first female Formula One racing drivers in the history of the sport. Given there have only ever been five women to compete at F1 level, Filippis was a gateway into the sport for women. She first started racing at the age of 22 in a Fiat 500. When she finished second in the Italian Sports Car Championship, Maserati started to take notice and hired her as a works driver. Unfortunately Filippis’ F1 career was a short and unsuccessful when we look at her statistics, but in our eyes, she was a pioneer and led a very important path for women in this sport.

As one of the only women in F1 history to have finished a World Championship in the top sixth position, Lella Lombardi was a part of 17 F1 Grand Prix. She was granted half points (short race distance) for the 1975 Spanish Grand Prix, which makes her the only female driver to ever score points in F1. Lombardi also competed in Formula Three, Formula 5000, NASCAR and race cars after her F1 career. She retired in 1988. Photo by Nationaal Archief / CC BY 4.0

Divina Galica is a bi-sport athlete having competed in four Winter Olympics on the British ski team, and also in three F1 World Championship Grand Prix. Galica’scareer started after she was invited to a celebrity race which led her to karts, Formula Two, Formula One and ending in sports cars and trucks. Her first F1 race was at the British Grand Prix in 1976 and ended at the Brazilian Grand Prix in 1978.

Desiré Wilson is one of the five women to have ever competed in F1, and is also the only woman to win an F1 race. In 1980, the South African scored a victory in Brand Hatch behind the wheel of her Wolf WR4. In the three years she competed at F1 level (1978-1980), Wilsonfinished 10th, 7th and 6th respectively. Despite hurdles and criticism from the rest of the sport, Wilsoncontinued to maintain her competitive spirit and today, she continues to race occasionally at the Goodwood Revival.

Despite a short career, Giovanna Amati enters the list as the last woman to have entered the F1 World Championship. With an interesting personal history (she was kidnaped and held for 800 million lira ransom in 1978 at the age of 19), Amati completed in Formula Abarth, Formula Three and Formula 3000, until 1992 when she entered the Formula One for Brabham. Racing against names like Nigel Mansell, Amati failed to qualify in an F1 race.

Susie Wolff was the first female to participate in Formula One since Amati. After seven years driving in DTM, in 2012 she took a place on the Williams team as a development driver and drove in practice sessions. The Scottish racer unfortunately never won a race as a processional, despite beating famous male drivers such as Lewis Hamilton, Ralf Schumacher and David Coulthard at various other times. Still counts! Wolff retired from motorsports at the end of 2015. 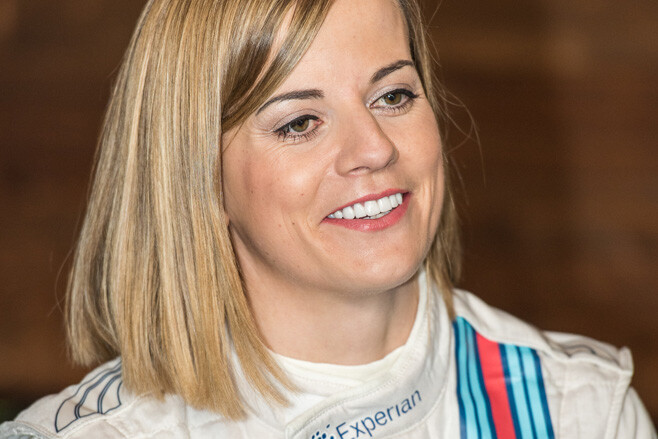 Our main girl Molly Taylor. This Australian driver is the daughter of Coral Taylor – a four-time Australian Rally Champion co-driver. In 2006, the now 27-year-old was selected into the Confederation of Australian Motorsport (CAMS) Women’s Driver Development Program. In what’s already been a decade long career, Taylor has achieved many career highlights and accolades. From the NSW Confederation of Australian Motorsport Young Achieved of the Year Award in 2006 to being the first female in the Australian Motor Sports Foundation (AMSF) International Rising Star Program, and one of the only females to participate in the World Rally Championship, not to mention a bunch of championships to her name, this woman is one to watch. 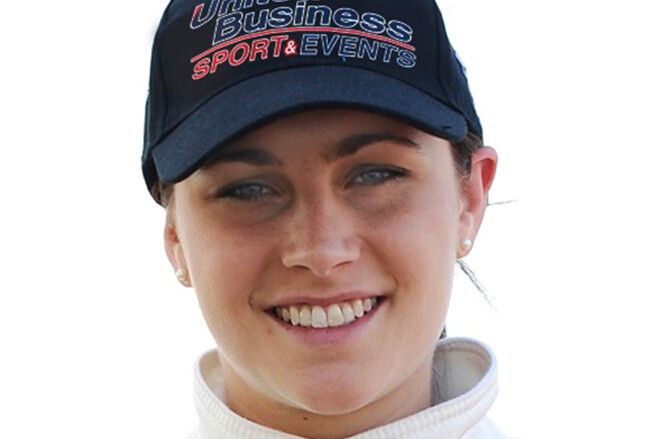 The German born Sabine Schmitz has grown up with one of the deadliest circuits in her backyard – the Nürburgring – and has driven it more than 20,000 times. She’s currently a motor racing driver for BMW and Porsche and is said to be one of the new presenters on Top Gear. 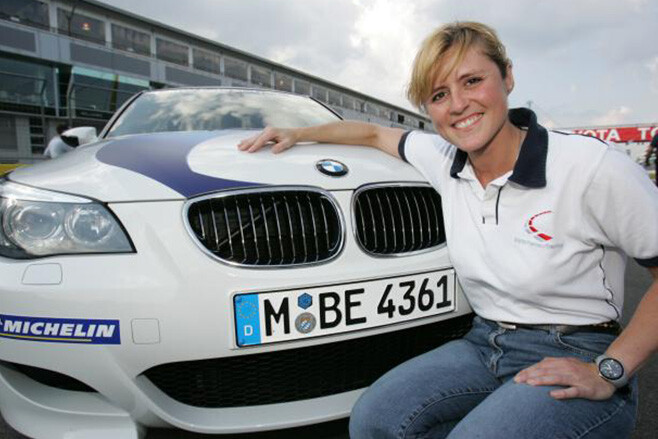 Otherwise known as the Iron Maiden, Simona de Silvestro currently drives for Andretti Autosport in the Indy Car Series where she finished fourth in the 2015 Louisiana Indy Grand Prix. Last year, it was announced Simona would drive in the Formula E for Andretti’s, a partnership that’s continued into the 2015-2016 season. Danica Patrick is the glamour of motorsports. But before you throw her into a stereotype, Danica is one of the women to watch with a hell of a lot of talent. She’s earned six pole positions across NASCAR, Indy Car and the Toyota Atlantic Championship, worked as a TV host, appeared in commercials, video games, music videos and even appeared in CSI: NT, The Simpsons and The Food Network’s Chopped. She’s got too many successes in the sport to list them all in this article, but we’re hoping those Formula One speculations that have been floating around since 2008 soon come to fruition. We have no doubt Patrick is one of the more exciting athletes of the sport and we can’t wait to see what she does next. 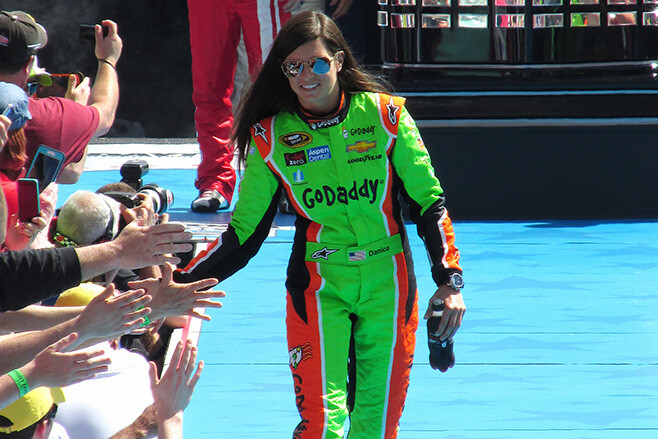 Carmen Jorda is a development driver for the Renault F1 Team and claimed to be one of the fastest women currently racing.  The Spaniard has raced in GP3, Formula Three and Indy Light series. She entered the F1 last year with the Renault F1 Team (then known as Lotus F1) but has copped some criticism since with some claiming she was only picked for the team because of her looks. We say give a girl a break – prove ‘em wrong Carmen, you go girl. 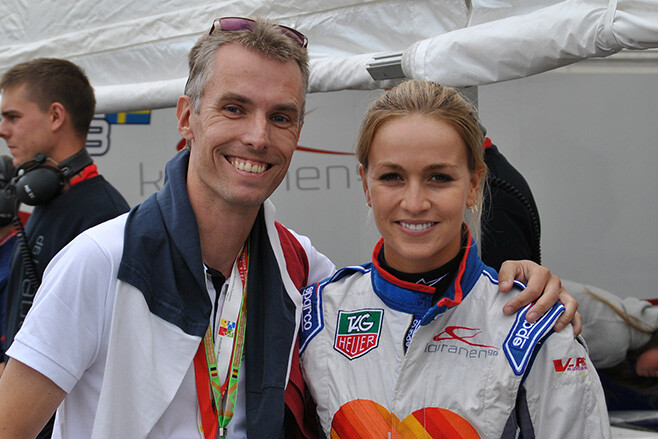