Bang For Your Bucks always throws up new metal and new technology to keep us on our toes, but in other ways, it’s a bit of a Groundhog Day.

Well, it is for me, anyway, a couple of decades on. As I often do, I took the opportunity to fire up one of my old bangers for the drive up to Winton. Yes, I could have taken a test car, but the run up to Benalla is just far enough to give a car a good gallop but not too far that the old bomb is certain to break or fall apart. And if it does stop, there’s enough passing traffic that you shouldn’t have to spend the night sleeping in a wombat hole.

As we pulled in to our overnight digs at Benalla, another groundhog popped its platinum-tipped head up. This time it was Luffy, recalling that many years ago as a little tacker, his dad had brought him to the same motel in the name of (his dad) hooning something around the Winton track. And now here was allegedly-grown-up Luffy; same motel, same track, same agenda. Clearly, any genes relating to evolution have been bred out of the Luff tribe. But one thing has changed in just a couple of years. The staff of this magazine, who, just two BFYBs ago, I described as looking like crèche escapees, are now firmly in control. Cordony has been promoted to judging duties, Newman is as-Tasmanian-as-ever but the go-to guy for many things and Campbell is not only running the magazine successfully, but has also developed a keen eye for an angle. And the little buggers CAN drive. 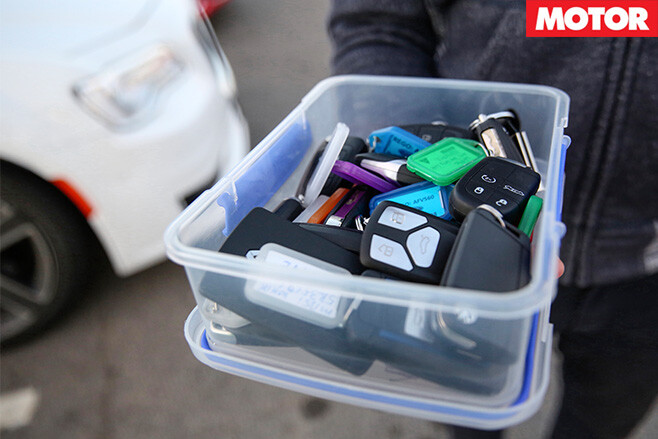 Newman’s always been fairly quick, but now Cordony is getting his eye in and Campbell and I had a great little session in the TTS and M135i where we traded apexes and ran hard together. I wouldn’t do that with a bloke I didn’t trust behind the wheel, but duking it out with Campbell posed no fears over flesh or metal. But going home, it was back to how it had ever been: The road was closed for half an hour as an SUV parked by the side of the highway (not a speed camera, sadly) burnt to the ground and then, just as night fell and the temperature plummeted, the heater fan on my old dunger failed. And yes, it’s a convertible.