All hail the return of the king.

You could view Bang For Your Bucks as a microcosm of the global evolution of affordable performance cars.

Through the 1990s and early 2000s, a period when Japan was the go-to nation for keen drivers on a tight budget, Mitsubishi and Subaru were almost omnipresent orientals on the top step.

Hot Lancers took the inaugural BFYB in 1994 (GSR) as well as the 2004 title (Evo VIII), Nissan’s 200SX rear-drive coupe proved Japan could deliver driving appeal beyond street-legal AWD rally rockets, while the most famous of those, the WRX – either in stock or STI guise – had an almost Schumacherian grip at Bang with five outright wins between 1998 and 2009.

Australians have long dipped into a wealthy pool of large performance sedans and utes, but it took the turn of the new century for the start of a local purple patch – and home soil heroes in the shapes of the HSV Clubsport R8 (2000), Holden Commodore SS (2006 and 2007) and Ford Falcon XR6 Turbo Ute (2008). 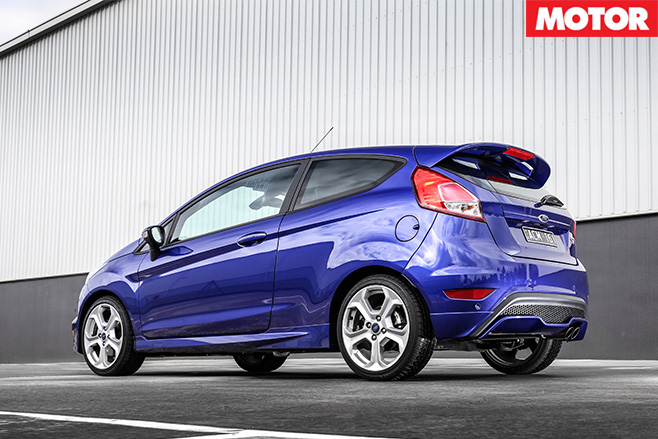 By 2009 Europe could only count the BMW 328i (1996), Renault Sport Clio (2001) and a Holden-badged Opel Astra SRi Turbo (2003) as BFYB winners. It was the Clio RS that finally shook hot-hatches out of their post-80s complacency, before 2004’s Golf GTI properly initiated a fast-hatch revival and, six years later in Mark VI form, the end of the fast-four-doors era.

And if you’ve looked at the pictures on this spread, it’s probably not much of a secret that the ST has retained its title this year – extending an unbroken streak of hot-hatch wins to six, with the Polo GTI and Mini Cooper GP also achieving champion status beforehand.

Surely the punters’ favourite, the Falcon XR8 that’s effectively an FPV in (more affordable) Ford clothing, would stop the rot for performance sedans. Yet while it muscled its way to runner-up in the $50K-100K group, its challenge faded to seventh in the overall standings. Its only consolation was that it was the only non-hatchback in the top 10. 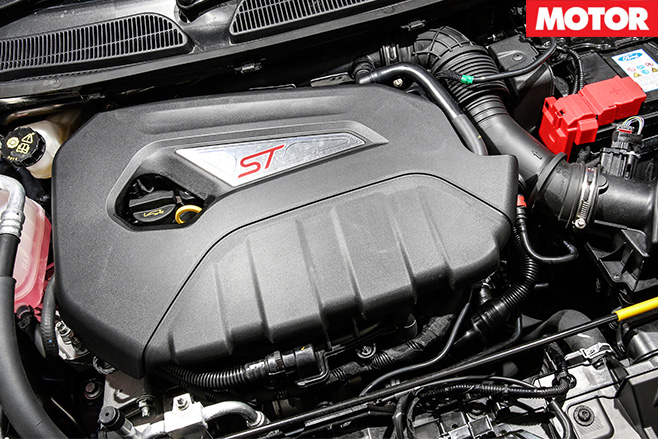 Why did it fall some way short? Well, it had the sixth-best Bang Index score courtesy of doing the business on the track, but a middling Price Index score and a vague front end that cost it marks with the judges meant there was no repeating the XR6 Turbo Ute’s 2008 feat.

The judges’ views accounted for 20 per cent of a vehicle’s overall Bang Index, with their top-five comprising (in order) the Trophy-R, M135i, Fiesta ST, Golf R, and TT. The other 80 per cent came down to excelling in the Excel spreadsheets once all the performance data and price tags were keyed into formulas more cunningly complex than the calculations that got man to the moon.

Here, the extrapolated results brought the TT crashing back to earth – sixth out of eight $50K-$100K contenders, and 17th overall due to a second-lowest Price Index score (just ahead of the GLA45) counteracting an eighth place in the Bang Index. It was still the best-performing coupe, finishing ahead of the 228i (18th) and RC350 (dead last).

VW’s best R-badged Golf may not have fallen out of favour with the judges in its second year, though it did slip places both in its category (from first to fourth) and overall (from third to sixth) due to stiffer competition. 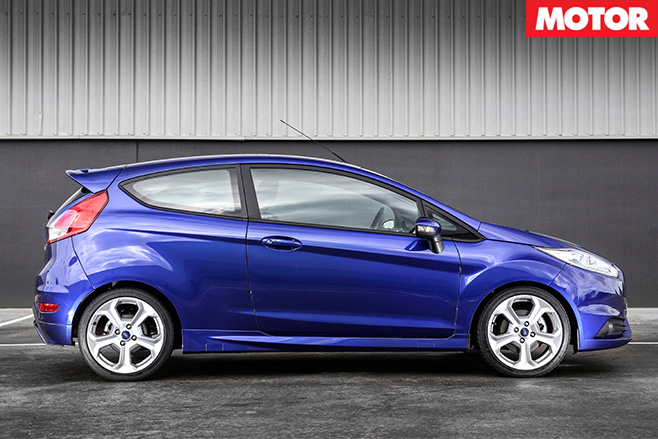 Its class crown is now worn by BMW’s not-quite-a-full-M-car M135i, which also punched its way to third overall – behind the Polo GTI that didn’t quite manage a third Bang trophy despite being equipped with a larger engine, a manual gearbox, and a lower sticker.

That still assured its position as the top-dog GTI, with the 208 GTi finishing fourth overall for the second consecutive year despite the 30th Anniversary edition using various mechanical tweaks rather than a Ouija board to invoke the ghost of Peugeot’s past.

The R-rated, R-badged Megane RS275 Trophy, which not unexpectedly transitioned from breaking Nürburgring records to topping the Winton timesheets, it could muster only fifth on the Bang scale, though, and an average Price Index left it sixth overall, and a spot behind the more junior RS. 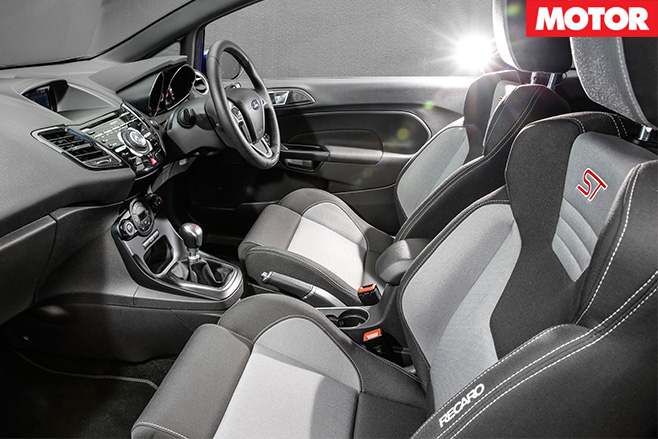 So we know the French can build a hot-hatch, but Ford of Europe also has a habit of creating cult small performance models. It didn’t help that dynamic gems such as the Fiesta and Focus didn’t reach Australia until just over a decade ago, while Australia missed out on the first-gen Focus RS and the second was way too expensive at $59,990.

And our first hot Fiesta, the 2007 XR4, shone with its chassis but not its 110kW 2.0-litre. The latest ST fixed that by joining the charge of the (downsized) turbocharged light brigade, and taking what was already the best-handling city car in its class to create a new benchmark. 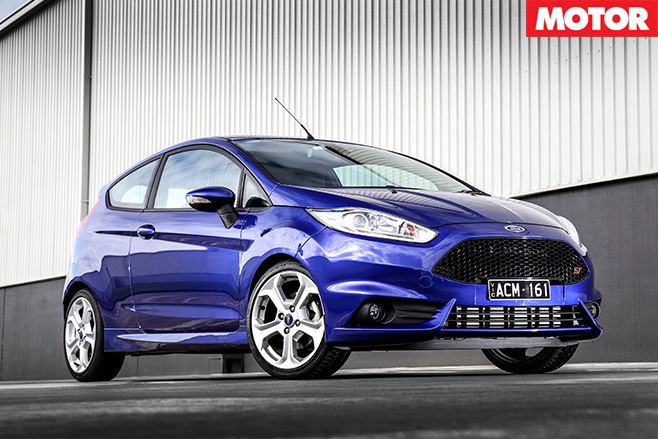 The ST’s 2014 BFYB score of 193.4 would still have been sufficient to win again this year, though despite a field arguably more competitive – particularly with the introductions of ramped-up direct peers in the GTI twins – the ST broke the 200.0 mark (203.4) to increase its margin of victory.

Its Price Index score actually dropped from 185.3 to 181.1 but quicker-than-last-year Driftbox times ensured that a Bang Index score of 95.7 more than compensated.

The result means European performance models now lead the intercontinental BFYB battle. But America’s Mustang and Japan’s MX-5 will be out to break the Euro-hatches’ stranglehold at Bang For Your Bucks in 2016. 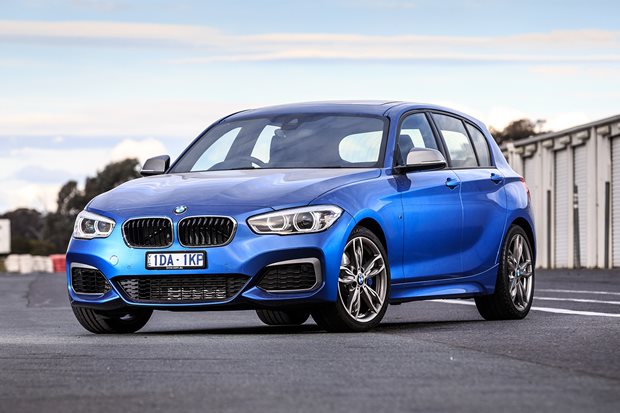 Ball-tearing 1 series the hottest hatch of all