It may look more like a high-riding A-Class but technically the GLA45 AMG is the lone SUV in this year’s Bang.

A couple of things make it stand tall in other ways: brash wings and body parts that make it look more WRX than AMG; and the bonkers 265kW four-cylinder turbo from the A45 and CLA45 that features a supercar-shaming specific output.

Teamed with launch control and an all-wheel-drive system that can shovel 50 per cent of the engine’s 450Nm to the rear axle, the GLA45 puts that engine to good effect from standstill. In the 0-100km/h and 0-400m sprints, the barmy Benz was pipped – and we really do mean pipped in the fractional sense – by only the M135i and XR8 overall.

That explosive acceleration also contributed to the third-quickest lap around Winton, with a 1min 40.4sec. Not that the GLA45 is a slouch through corners, though its apex speeds at Turns 5 and 9 were decent rather than stunning. The elevated centre of gravity and suppler suspension mean the GLA45 leans more than its ground-hugging twins, but it’s never excessive and taut body control gives the big-hatch-style SUV a high chuckability rating.

The steering’s disappointing on-centre feel that’s noticeable on the road disappears on the track, and you’re instead left focusing on its positive attributes: decently quick and naturally weighted for an electric system.

And there’s nothing like a bit of Alcantara (as featured on the GLA45’s steering wheel) to suggest you’re in a vehicle where you should be wearing racing gloves rather than driving mitts.

Like its compact relatives the A45 and CLA45, the GLA isn’t your traditional AMG when it comes to straying from your intended direction. Where a C63 or E63 would invite power oversteer, the GLA is adjustable more to a lifting rather than pressing of the throttle when things are loaded up mid-corner.

It doesn’t sound like your typical AMG, either, with the raucous exhaust and its cracks on upshifts dominating the noise rather than the engine. Personal preferences determine whether that’s a bad thing or not. 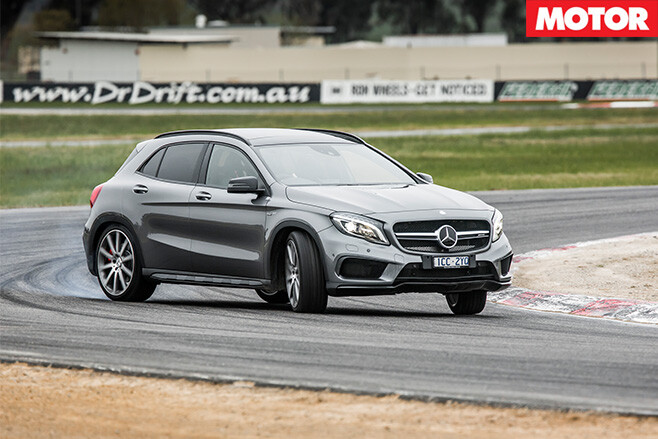 Those shifts are suitably rapid when charging through the gears, though fast driving continues to expose the occasional stubbornness of Mercedes’ seven-speed dual-clutcher to downchange on request. Requesting second from third for tighter corners can be particularly frustrating.

So the GLA45 AMG is certainly playful to a point, and it finished second in the Bang Index despite falling into the lower-half order of the judges’ ranking cards.

The least-affordable sticker here – $80,430 – cruelled the madcap Merc’s Buck factor for fifth overall in the $50-100K, but not bad for a sports utility vehicle.

Campbell 5th – “Surprisingly good. Grunt, grip and playfulness, it felt at home on the track.”

Morley 7th – “SUVs bore me. Sports SUVs bewilder me. This aint bad, though.”

Newman 7th – “Amazingly quick for a faux-SUV, and surprisingly keen to play.”

Luffy 5th – “Easy to drive on the limit; this car kinda does it all for you. It’s quite boring, but surprisingly pulls a lap time. It’s a little bit loose in the rear through the sweeper, which is the only time it’ll catch you out. Also, you end up going through corners in third when you’d prefer to be in second.”