If the RS275 Trophy R is a riot on the racetrack, the GT220 is more a civilised protest march – unfurling banners ‘shouting’: What do we want? Performance! How do we want it? Erm, not too hardcore.

Renault’s stopover variant on the long-haul price trip between base and flagship Meganes first arrived locally in 2013 in wagon form but makes an entrance here with the same formula in a different body style – five-door hatch.

That makes it even more the RS-Lite, even with the extra practicality of two rear doors. Out on the track, the RS275’s 2.0-litre four-cylinder engine is still enjoyable even in detuned state – down 33kW and 20Nm to 162kW (the 220hp referenced by the badge) and 340Nm.

It’s rev-happy, pulls strongly and sounds rorty – and satisfying to manipulate via the six-speed manual with its slick shifts and well-judged ratios. The GT220 isn’t embarrassed by the RS275 in many of BFYB’s performance measures, either – less than a second slower to 100km/h and still capable of a sub-15sec 400m sprint. 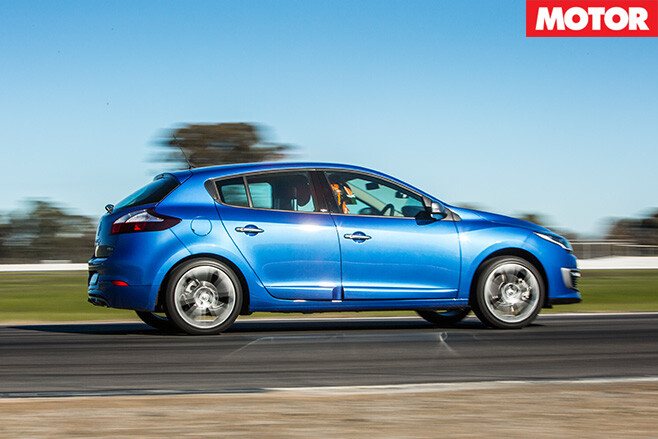 It’s piecing everything together for a lap where the gulf in performance lies – trounced by the full-sugar RS by nearly eight seconds. Or nearly two seconds if you want to compare the RS in its $0-50K category – the Clio.

The absence of the 275’s Brembo brakes reduces bite and feel, though it’s the lack of any torque-management devices deployed to the front wheels that hurts the GT the most.

If the RS Megane’s mechanical limited-slip diff allows you to depart an apex like being fired out of a cannon, the GT misfires on the limit by either understeering or being tripped up by its non-switchable stability control. There’s also more noticeable torque steer under urgent acceleration when running straighter.

The GT220 isn’t bereft of balance, though, as you’d expect from a suspension that has still been fettled by those RenaultSport boffins. And the steering is praiseworthy for its weighting and accuracy. 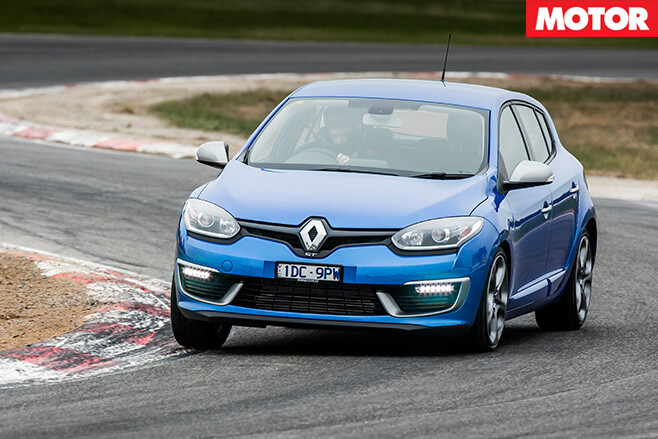 This all probably explains some slight polarisation among the judges: it ranked as high as 6th and as low as 10th.

Running all the numbers through our BFYB formulas that make Stephen Hawkins’ A Brief History of Time easier to read than The Cat in the Hat … and the GT’s Bang Index was short of the Clio RS’s before even considering comparisons with the Megane RS.

And when you want to take to the streets – rather than the track – the GT is also the more comfortable Megane.

Morley 6th – “Surprised me, this one. A compromise that isn’t one.”

Luffy 9th – “I’m sick of seeing GT badges on cars that aren't worthy. You can't turn the stability control all the way off, so it limits performance. If there's something that's going to limit the performance so much, then why put a GT on it? The car has great potential, but without the ability to turn the electronics off you can't explore the limits of the car. Don't market it as something that it's not.”