In last year’s Bang for your Buck, the Clio RS herded an elephant out of the room – that we kinda preferred the old, high-revving version – by taking class honours in the $0-50K category.

The reluctance to offer a manual ’box as an alternative to the standard auto is still a bit Dumbo, but no-one was disappointed to see this track-loving hatch back at Winton.

Its chances of overcoming its 2014 nemesis – the Fiesta ST – weren’t done any harm when it posted even better performance figures this time around. But there was a three-fold problem. Not only were a revitalised Polo GTI and anniversary-candle-blowing 208 GTI getting in on the act, the Ford fared better against the clock.

The ST closed its 0-100km/h deficit from four-tenths to just four-hundredths, and even reversed positions in the quarter-mile and, most crucially, the lap. 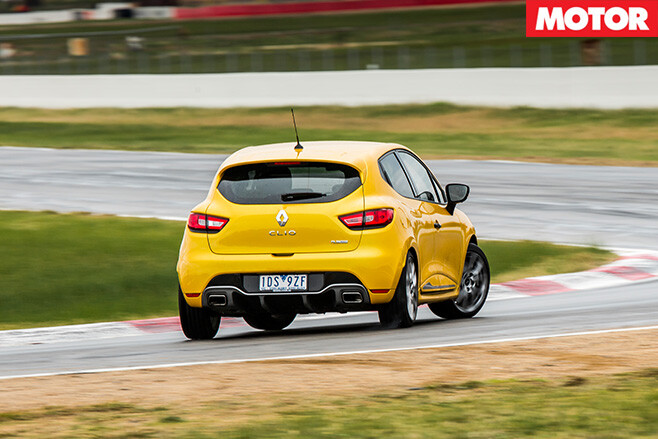 Clio’s best hope was for the judges to counter these statistical losses with gains through their seat-of-the-pants votes. And there’s plenty to admire – once you unleash the Clio RS’s potential by activating Race Mode (via the red centre console button) to disengage ESC and force the use the paddleshift levers.

The paddles are nonsensically fixed to the steering column, making shifts awkward if there’s any rotation on the wheel, though at least the auto holds chosen gears. Just try not to think too much about the old 197 and its rev-hungry atmo 2.0-litre: there’s a shorter journey to redline, so instead enjoy the 1.6L turbo’s extra punch.

The new RS Clio’s chassis is also not quite as responsive, but adopt a half-glass-full mentality and it’s easy to savour the precise and hefty steering, the high levels of traction and grip, and a throttle-adjustable balance that makes the Clio RS fun to guide through corners. 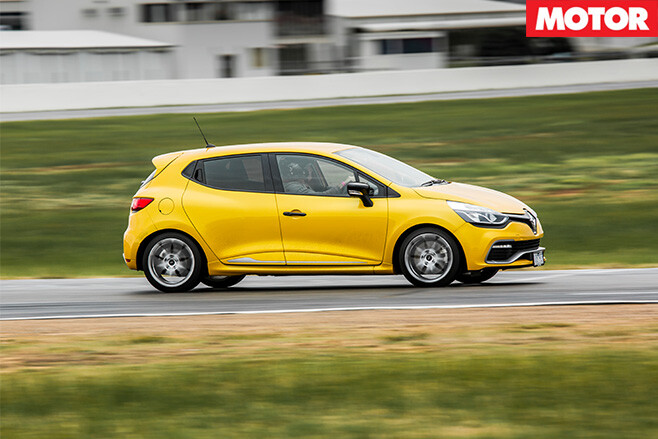 Brakes impressed for modulation and feel, though the Renault’s 100-0km/h stopping-power result was a black mark on more than just the bitumen. And overall, the Clio is missing the inherent speed of the Polo GTI, the respect-demanding oversteer tendencies of the 208 GTI 30th,and the sheer involvement of the Fiesta ST.

Still, four of the five judges ranked Renault’s smallest hot-hatch in their Top 3s, and the Clio’s Bang-Price ratio resulted in fourth overall.

So no podium let alone a cup for the Clio RS this year. That’s perhaps something not to mention in the halls of Viry Chatillon, Renault Sport’s HQ, though it does have another Trophy – the Clio RS220 – on the way.

Campbell 3rd – “Truly talented chassis is begging—<i>begging<i>-- for a manual."

Morley 3rd – “But for a proper gearbox, would’ve finished higher.”

Luffy 4th – “It's a lot of fun, but the chassis is let down by the tyres. The car probably has more grip and potential with slightly better tyres under it. The paddles being mounted to the steering column and not the steering wheel takes getting used to, especially through the tight stuff as you have to take your hands off the wheel mid-corner to change gears. Also, the brakes don't inspire confidence.”