Mazda’s brilliantly light and easy sports car won the judges’ hearts and minds. Here’s why it deserved its victory

Mazda’s brilliantly light and easy sports car won the judges’ hearts and minds. Here’s why it deserved its victory.

IT HAPPENS to the best of us. The compulsion to continually acquire and accumulate, to expand our empire, to want more than what we already have.

It’s hard-wired into our consciousness, yet true enlightenment lies in the reversal of that thinking. A deliberate rejection of excess to achieve a fundamental lightness of being.

Here is an open-top, rear-drive sports car that weighs about as much as a supermini, yet exhibits the body strength of a car weighing 50 percent more. It’s also more compact from nose to tail than any MX-5 in history, yet manages to extract vital cabin-space increases over its larger, heavier predecessor. 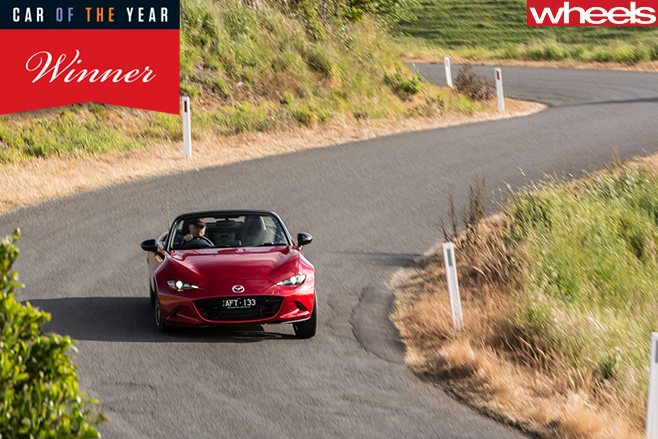 As an exercise in balancing weight management with crash safety, and the sporting philosophy of a front-midship drivetrain configuration with 50/50 weight distribution, the ND MX-5 is a stunning achievement. Hence why this delectable roadster has earned the coveted title of Wheels Car of the Year for 2016.

Had we been gambling types, the petite Mazda would’ve been the odds-on favourite for this year’s gong. Yet two-thirds of the way into COTY’s exhaustive week-long testing regime, the outcome was anything but clear-cut.

The Audi Q7’s outstanding refinement and air-sprung ride, the Jaguar XE’s superb dynamic performance and the Volkswagen Passat’s sophisticated polish ensured the MX-5 needed to mobilise every fragment of its gram-strategised form if the Wheels trophy was to land on its mantelpiece. 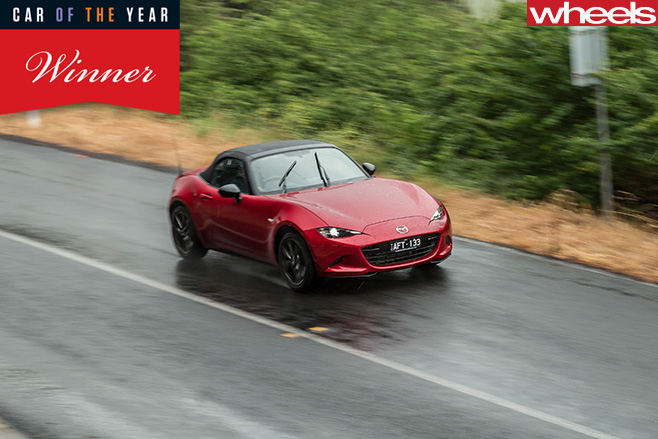 The MX-5’s journey to COTY glory began at Holden’s proving ground, appropriately in the least sporting variant of its four-strong line-up – the 1.5-litre GT automatic. Laden with $5000 worth of luxury extras, including leather trim, seat heaters, and a Bose stereo with speakers cleverly embedded in the seat headrests, the GT could’ve easily slipped into the ‘hairdresser’s car’ category and potentially undermined the MX-5’s chances. But no. Not even for a nanosecond.

The six-speed auto 1.5 proved an enormous surprise. Despite its modest 96kW and 150Nm, the baby-engined MX-5 has an effervescence that makes you want to continually spank its bottom to the 7500rpm redline (and beyond), accompanied by a delightful rasp as it extracts those last few hundred revs.

The ‘SkyActiv-Drive’ auto ’box is primed for a good time too. Smooth and intuitive – if sometimes rather busy – in regular driving, the auto has an innate ability to keep the 1.5 ticking along in its pleasure zone. 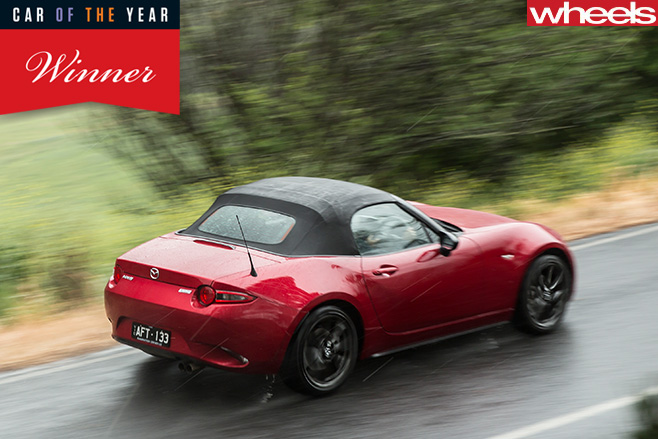 The six-speed manual 1.5 demands more work from its driver, but what an utterly fabulous piece of mechanical goodness! And all this for $31,990. Call it a win for democratic motoring.

Cough up another $2500 and you move into 2.0-litre MX-5 territory, gaining a chubbier, slightly throatier and more tractable 118kW/200Nm engine for minimal additional coin. But here’s where the (friendly) debate raged. The 1.5’s raspy, rev-happy sweetness or the 2.0-litre’s muscularity? An impromptu poll between all eight COTY judges resulted in a virtual tie.

Of even more tangible functional benefit to the MX-5’s station in life, and its COTY win, is its chassis. It’s almost difficult to put into words just how revelatory it is to experience a small, lithe, super-agile and exquisitely balanced little thing like the MX-5. And at sane speeds too. 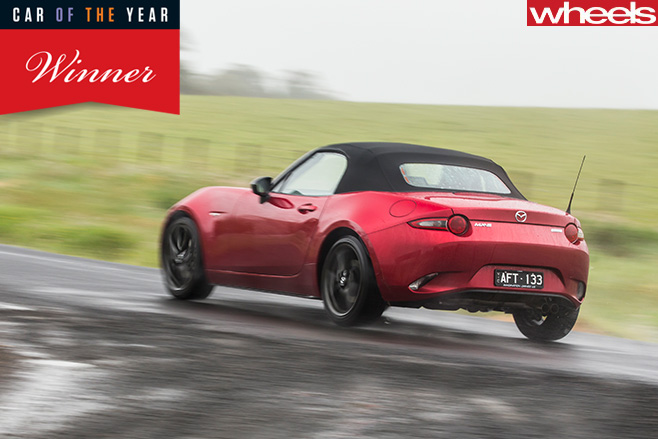 Then there’s the MX-5’s ride suppleness, which is seriously brilliant for a sports car, no doubt helped by its body rigidity.

No MX-5 variant is immune to fairly persistent tyre noise, yet there’s a pleasant calm to the MX-5’s cabin when driving with the roof down at three-figure speeds. And that shapely soft top is incredibly easy to operate. About the only black mark against the MX-5’s beautifully crafted cloth roof is that it isn’t really receptive to being opened on the move.

Inside the MX-5’s characterful cabin, clever use of space abounds. For example, there’s a decently sized, lockable glovebox between the seats, liberating extra space for the passenger’s legs. 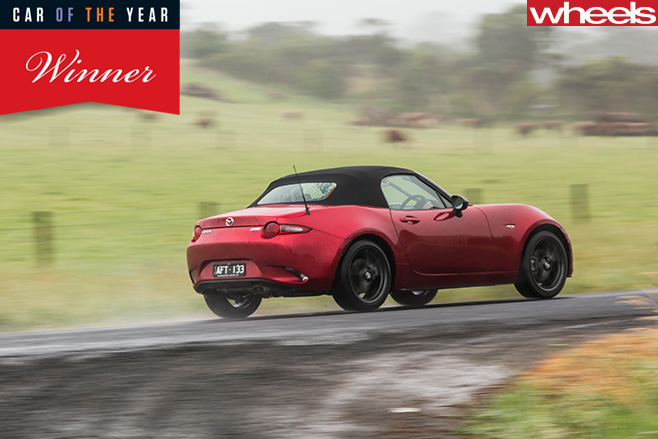 But a roadster as small as the MX-5 was never going to be a perfect fit for everyone. Despite the ND model’s increases over its NC predecessor – 65mm more cabin length, plus 10mm extra width and height – it isn’t a one-size-fits-all type of car. My 179cm frame settles perfectly into the MX-5’s low-slung interior, but taller judges wish it had a reach-adjustable steering column (it’s height only) and those with larger thighs would prefer a smaller steering wheel.

But the wheel itself is art, with a slim, leather-stitched rim just like the 1970s British roadsters that inspired the original MX-5, guiding near-perfect steering that spans a super-tight 9.4m turning circle and delivers scalpel-sharp turn-in and precision.

The MX-5’s seats eschew foam and springs in lieu of a lightweight net material and urethane pads that allow you to sit deep within the seat. As a result, the MX-5 has clearly the most comfortable front passenger’s seat in Mazda’s entire model portfolio, while the driver’s bucket delivers a terrific driving position for the majority of Australians out there. 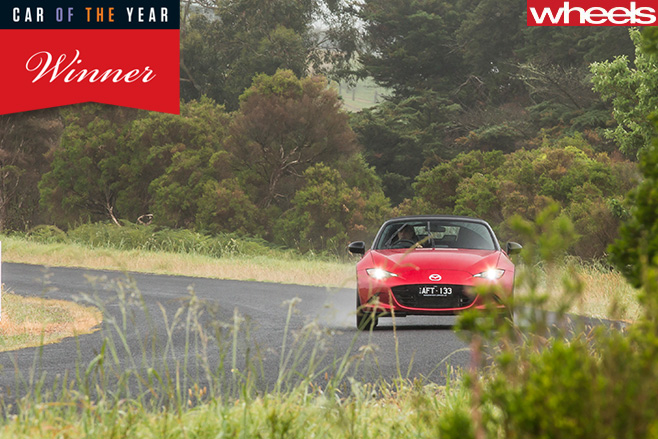 While the MX-5 effortlessly aces the Function aspect of COTY’s criteria, its successes in the Technology, Efficiency, and Safety departments aren’t quite so clear-cut. It could be argued that Mazda has merely refined an existing design blueprint, making it appear that the MX-5 lacks innovation. But the holistic thinking behind its overall concept means this isn’t the case.

While the MX-5’s ‘SkyActiv-G’ drivetrains are developments of existing engines, there isn’t a single item in the entire car that hasn’t been touched by Mazda’s fastidious ‘gram strategy’.

The MX-5’s focus on improved technology yields gains in efficiency and safety too. Despite being flogged mercilessly, the 1009kg 1.5-litre manual averaged an impressive 8.0L/100km carrying two occupants on our hilly, twisty road loop, closely followed by the 2.0-litre manual and the 1.5-litre GT auto. We’ve no doubt that all three could easily dip into the sixes (or better) on a flat 110km/h cruise. 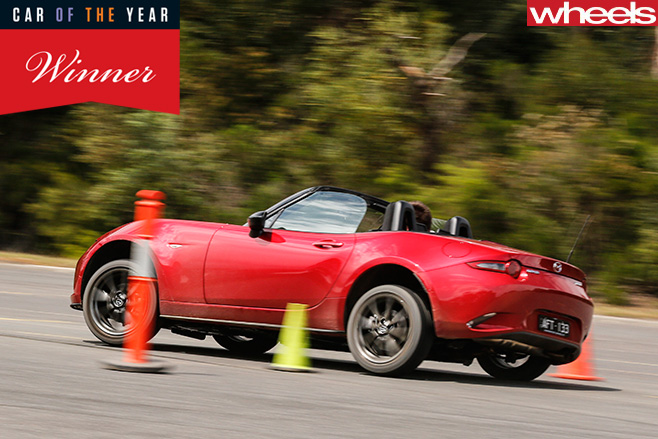 While the MX-5’s NCAP score reads four stars, mainly because it doesn’t tick the box marked ‘curtain airbags’, Mazda has engineered seat-mounted side airbags that not only protect occupants’ torsos, but extend further than the norm to protect heads as well, much like a curtain airbag. And then there’s the efficacy of the MX-5’s stability-control system, which maintains a decisive grip on the car’s overall composure with a subtlety that minimally inhibits its dynamic flow.

Ultimately, the over-achieving MX-5 isn’t quite perfect. The lack of an ESC Sport setting removes the possibility of enjoying more of its rear-drive deliciousness while still having a safety net. 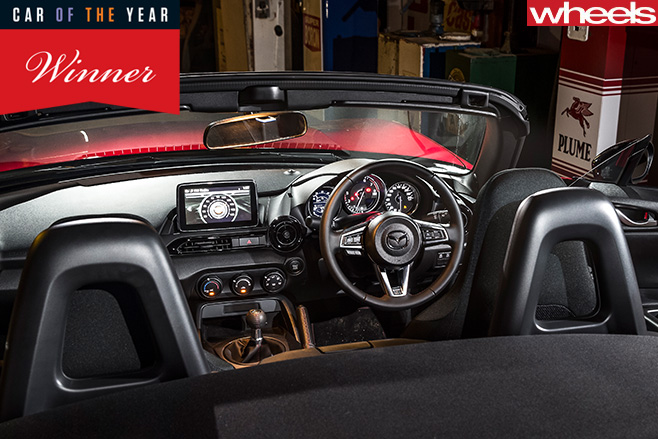 Its brakes – larger in diameter, front and rear, in the faster 2.0-litre – perform strongly on both wet and dry surfaces, less so on dirt. And to keep that sticker price looking golden, our MX-5s miss out on autonomous emergency braking.

Finally, the MZD Connect multimedia system in our test 1.5 GT auto wasn’t quite the full six-pack and kept glitching when connecting to phones and searching for tracks to crank through its excellent nine-speaker Bose stereo.

But there’s an essence to the ND Mazda MX-5 that transcends mere box ticking and clipboard analysis. It gets under your skin and attaches itself directly to your emotional centre, in the most exquisite fashion imaginable.

The MX-5 proves you don’t need brute power and insane speeds to have a momentous time behind the wheel. It’s motoring at its purest – beautifully simple, yet simply beautiful to drive – and it achieves all that with a delicate global footprint.