ALMOST two decades have passed since Toyota launched the Toyota Prius, now a name virtually synonymous with hybrid propulsion. Few would have imagined the dorky-looking petrol-electric sedan that went on sale in Japan in 1997, and which reached Australia in 2001, marked the beginning of a global phenomenon. Now at gen-four, it’s the most successful eco-car the world has ever seen.

Toyota’s hybrid drivetrain – four-cylinder petrol engine and two electric motor-generator units, all connected by a CVT-mimicking planetary gear – has evolved gradually with each generation. For the new Prius, engineers improved the thermal efficiency of its 1.8-litre engine. No other mass-produced engine betters it, they claim. At the same time, the hybrid’s motor-generators, transmission and power electronics were redesigned for less weight and more efficiency. The drivetrain’s control software was also updated. 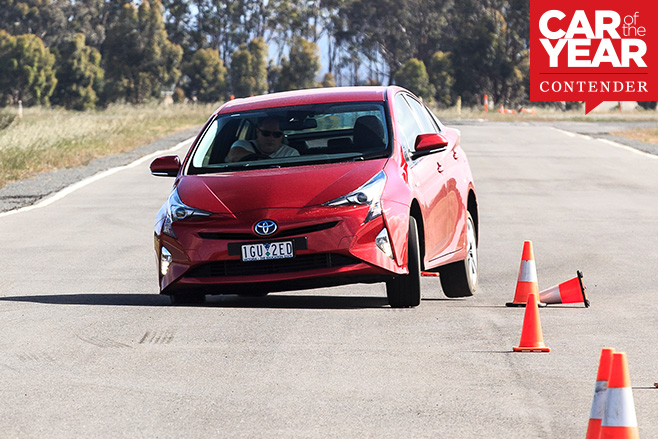 The result is a fuel-efficiency improvement of more than 10 percent compared to the third-generation Prius. The new car’s result in the official consumption test is a very impressive 3.4L/100km. But the drivetrain redesign also brings a reduction in power. The maximum combined system output is now 90kW, a 10 percent cut. There is, however, little apparent loss of performance. The new Prius doesn’t feel any slower.

But the car’s new architecture does bring welcome improvements in driving dynamics. The new Prius is the first car to utilise the Toyota New Global Architecture, specifically the GA-C version. This brings greater stiffness, a multi-link rear end in place of the previous torsion beam, a lower centre of gravity and an improved steering system.

It’s the best Prius yet to drive, no question. 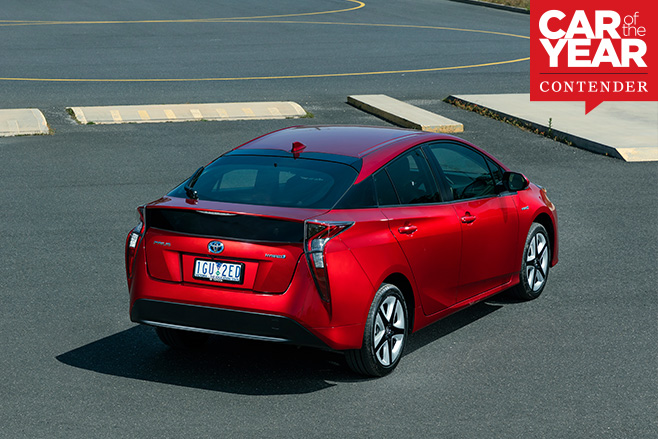 Ride, handling and refinement are noticeably better. But it’s capable and competent, rather than involving and inspiring. The ESC system is both late acting and noisy.

The five-seat interior, which is slightly larger in most key dimensions, is better equipped than ever. Sensor-based safety and driver-aid systems are standard even in the basic $34,990 model. The i-Tech version, with some extra driver-aids, larger wheels, sat-nav and leather, costs $8000 more. Both come with seven airbags and the Toyota scores a five-star safety rating from ANCAP.

Where the Prius fails spectacularly is design. Toyota seems to have run out of ideas on how to advance with its hybrid icon. And this is evident inside and out… 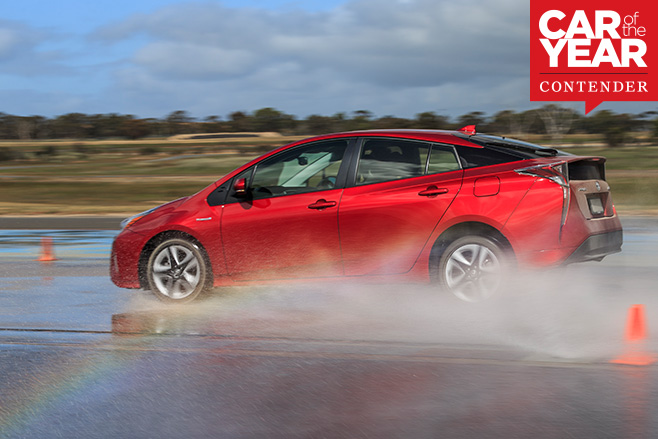 The interior is all new, but it retains the same too-low steering wheel position and foot-operated parking brake of the previous car. The instrument panel layout, too, sticks with a layered design and centralised displays. These were all features introduced in the second-generation Prius.

It’s even worse on the outside. The new Prius is an obvious evolution of the 2003 model’s shape. But instead of creatively updating the basic form, Toyota’s designers have done little more than desperately add details… until it was properly grotesque.

The new Prius brings incremental improvements – some of them long overdue and quite welcome. But the hybrid’s style, especially its exterior, is a giant step backwards. And it goes almost without saying that small advances, plus ugliness, is not a Car of the Year-winning combination.