12 of the world's hottest new performance cars, 4 furious days, 1 upset. Welcome to the fastest PCOTY ever

As our ultimate award, Performance Car of the Year is the highlight of MOTOR’s calendar.

How could you not look forward to a week-long thrash on road and track in the finest fast cars of the past 12 months? Rarely is there a bad car present – typically we’re sorting varying degrees of excellence – but as the pieces fell into place it became clear that PCOTY 2017 would be quite a special field.

As such our ‘10 best cars of the year’ blew out to a dozen, which is stretching the limit of what we can logistically accommodate, but to leave any of these 12 at home would have been criminal – as it is, some arguably worthy contenders failed to get a guernsey. Nonetheless, the last time Australia witnessed a team of 12 this good, Warnie, McGrath and Ponting were wearing the baggy green. 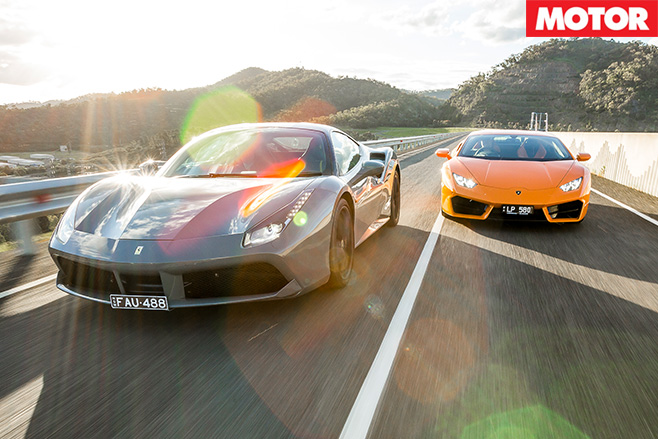 Supercars are generally very hard to come by for tests like this. There tends to be only one example of each exotic available for Australian media to use, so lining up the PCOTY dates with their heavily booked schedules is a challenge. Add in the high number of kilometres, the wear-and-tear of racetrack duty as well as performance testing and we usually only manage to score one or two.

This year, however, no fewer than four bona fide supercars make it to the Driver Education Centre (DECA) at Shepparton for day one of PCOTY 2017, and they don’t come much more super than the Ferrari 488 GTB. Turbocharging is supposed to ruin sports cars by adding weight and dulling response, but Ferrari has added plenty of silver lining to the forced-induction cloud by screwing 492kW/760Nm out of the 3.9-litre twin-turbo V8.

Having sampled the 488 before I know its performance is borderline frightening, but as the only judge to have spent significant time behind the wheel, it’s an unknown quantity for most. And then there’s the as-tested price tag of $625,278, making it by far the most expensive contender. 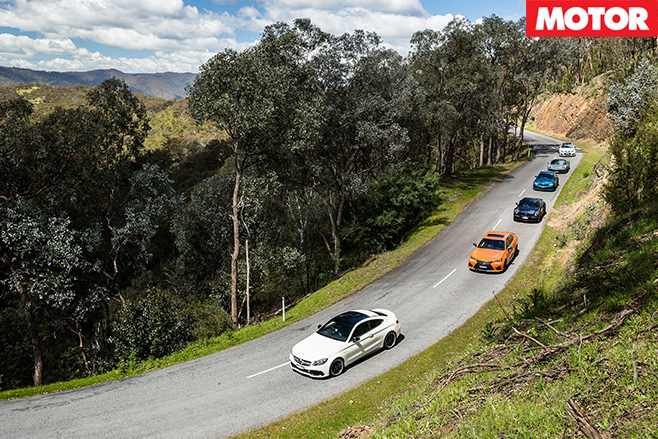 Next on the list is another rear-drive Italian wedge, the Lamborghini Huracan LP580-2, a car that could’ve been made with MOTOR in mind. By removing the front driveshafts, Sant’Agata has prioritised fun over pure speed, though with a 427kW/540Nm 5.2-litre V10 in the back it still has plenty of the latter.

The deletion of all-wheel drive doesn’t always translate to more entertainment – Morley still wakes in a cold sweat at memories of the Gallardo LP550-2 Balboni that appeared at PCOTY 2010 – but the advantages or otherwise of two driven wheels will be brought into sharp relief by the Huracan’s quattro cousin, Audi’s R8 V10 Plus.

While evolutionary in both design and specification, the latest R8 feels quite different to its two-time PCOTY-winning predecessor to drive. Thankfully, that searing atmo V10 remains, now tweaked to 449kW/560Nm, along with the usual first-class Audi interior and Blade Runner looks. 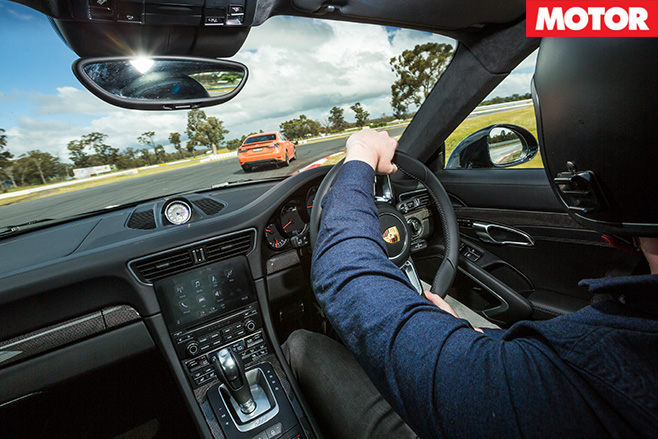 Our other all-wheel drive German is the Porsche 911 Turbo S, the ultimate version of the most successful car in PCOTY history. While it may seem outwardly similar to the Turbo that won in 2014 – it’s even the same colour – in revised 991.2 ‘S’ guise we’re talking another 44kW/90Nm, carbon ceramic brakes and clever handling tech like active anti-roll bars. Restrained and sombre in its Jet Black paintwork, the 911 couldn’t be more of a contrast to the flamboyant orange Lambo – you get the feeling the two wouldn’t get along at a party.

The Turbo S would rather talk to the Nissan GT-R, the two sharing a common interest in tearing up twisty roads at physics-defying speed. The R35 has appeared twice before at PCOTY, winning on both occasions, but with the MY2017 facelift being the most substantial yet, we thought it would be interesting to see where Godzilla ranked among the latest offerings.

Now packing 419kW/632Nm, it undoubtedly still has front-running pace and the suspension and interior upgrades rectify some of the criticisms we’ve had in years past. But can a softer, more rounded GT-R still wow in the same manner as when it last vied for PCOTY honours five years ago? 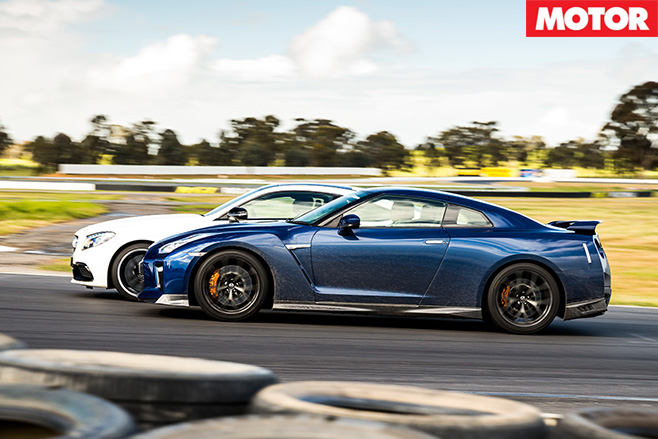 One car that’s progressed the other way is the Mercedes-AMG C63 S Coupe, the Nissan’s closest rival, on price at least. Traditionally, AMGs have been comfy cruisers with big engines, but over the past decade its cars have shifted markedly to the point where the latest C63 S Coupe is a hardcore, fire-breathing two-door with a severe hatred of its rear tyres. The C63 S sedan scored a surprise, but very deserved, second place last year, so it would be a brave soul who writes off the sharper, more focused Coupe.

One of the hero cars of 2016 is the BMW M2, rightly hailed as a return to form for M Division. In Oz-only Pure guise it’s a back-to-basics recipe with tasty ingredients: 3.0-litre twin-turbo six in the front, six-speed manual in the middle and limited-slip differential at the rear, all offered at a price that makes a Cayman or TT – not to mention its M4 big brother – look a bit expensive.

Expensive isn’t an accusation you could level at the VW Golf GTI 40 Years. Granted, $48,990 for the six-speed dual-clutch version we have here isn’t exactly church change, but it does make the limited-edition Golf the cheapest car in the field. The $2500 premium over the Golf GTI Performance appears good value, too, given the 40 Years scores bespoke 19s, an aero kit, Alcantara interior bits and, most importantly, an extra 26kW, with a further 18kW/30Nm available in 10-second bursts on overboost. 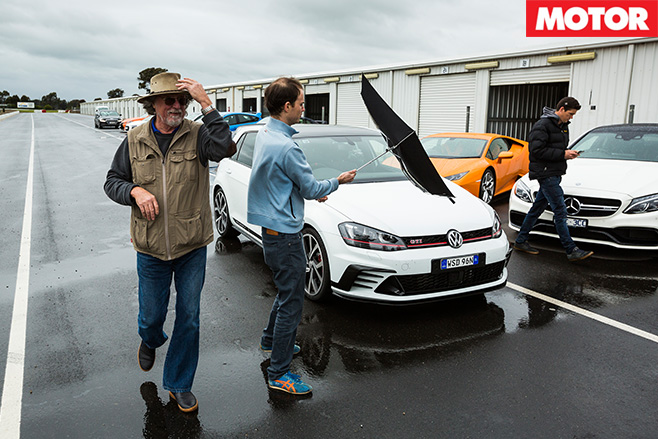 If you want value, though, look no further than the Ford Focus RS. The previous front-drive RS (which was brilliant) cost $59,990, yet this latest Blue Oval hot hatch, with segment-leading power and torque and all-wheel drive, asks for a mere $50,990. Although actually buying one for that price is a different matter given the current levels of demand.

Regardless, Ford’s fantastic five-door rewrites the hot hatch rule book and has its sights set on upsetting the apple cart for a few of the big-dollar exotica. The same could be said of Ford’s other PCOTY 2017 entrant, the Mustang GT. We tried to limit each manufacturer to just one car, but knew there would be howls of protest if either the Focus or Mustang was left at home.

But Ford’s latest pony car doesn’t make the list on popularity grounds alone. It’s a properly sorted coupe and offers an unrivalled combination of style and sex appeal for less than $60K. 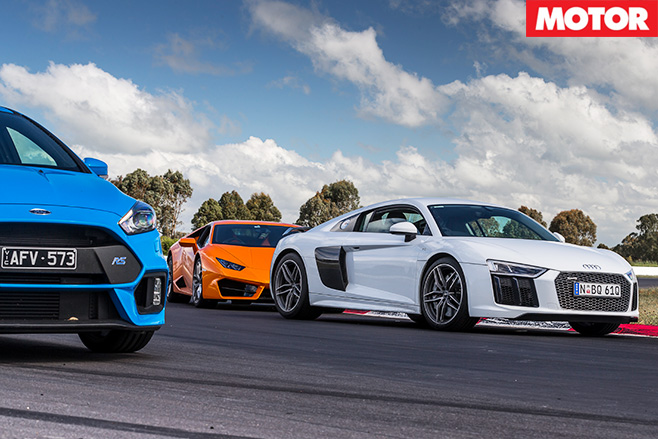 Like the Mustang, the Lexus GS F has a bruising 5.0-litre naturally aspirated V8 under the bonnet, but the similarities end there. The quirky Japanese sports sedan is one of the surprises of 2016. On the face of it, the GS F merely packages the RC F’s mechanicals in a more practical four-door body, but somehow the result is much more cohesive and, as a result, a hell of a lot more entertaining to drive.

Speaking of entertaining, last but certainly not least is the HSV Clubsport R8 LSA. If it feels like the supercharged Clubbie has been out for ages, that’s because it has – about 12 months, in fact. HSV’s Gen-F2 range launched just weeks after last year’s PCOTY but was a guaranteed call up thanks to 400kW/671Nm of blown V8, finely honed dynamics and a sharp (in this company, at least) $80,990 price tag.

This year’s testing schedule closely follows that of 2015: a day at DECA to test the contenders’ performance in a closed environment, flat-out laps at Winton and two days of on-road assessment to make sure everything works as it should in the real world. 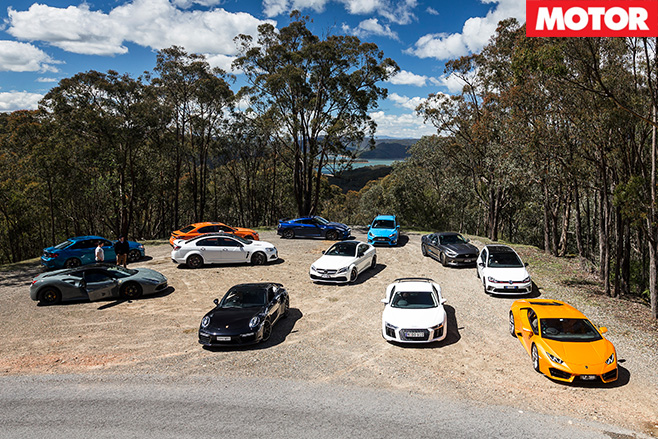 What has changed markedly is the judging procedure. You can read the nitty-gritty details in the accompanying breakout, but essentially we’ve gone back to the future, re-introducing a scoring system in an attempt to make it a little clearer how each judge came to their verdict on each car and why.

With fuel tanks brimmed, memory cards loaded and keys in ignitions, all that’s left is to discover which contender will reign as the performance car king for the next 12 months.

Read more about the Judging Process

Check out this year's Judges