Sebastien Loeb didn’t win nine straight WRC titles by chance. Nor is it luck that has secured Audi victory in 13 of the last 16 Le Mans 24 Hour races.

Such dominance is the by-product of hard work, determination and talent. A similar combination of attributes explains Porsche’s impressive run of success at our annual Performance Car of the Year test.

The 991 911 GT3’s victory is Porsche’s 12th in the 20-year history of the event, however it was far from a foregone conclusion. With a brand new sportscar from AMG, an all-wheel drive version of last year’s third-placed F-Type and the hottest hatch of recent times, this year’s field was the toughest in recent memory, but in the final reckoning the GT3 stood head and shoulders above the rest. Whichever way you cut the deck, Porsche’s hardcore 911 reigned supreme. Want to talk numbers? No problem. The 911 GT3 was the class of the field in a straight line, its 3.55sec 0-100km/h sprint besting the all-wheel drive (and supercharged V8) Jag by a couple of tenths.

Okay, so with that 3.8-litre flat-six pressing down hard on the rear wheels, it’s always going to shoot off the line, but the speed is relentless. The quarter mile takes just 11.48sec and it is travelling 201.60km/h as it does so. Only the AMG GT S could best that (202.60km/h) and that’s packing a 375kW/650Nm twin-turbo V8. An atmo six-cylinder producing 350kW/440Nm just shouldn’t be this fast.

The stats are impressive, but initially the GT3 feels impressively brisk without being spectacular. That’s when you realise you’ve been changing up at 7000rpm, when every sense suggests that that’s the prudent thing to do. The final 2000rpm changes everything and immediately dispenses any notion that the GT3 has somehow gone soft – the acceleration becomes manic and the engine emits a blood-curdling scream. Luffy’s searing effort also illustrates the enormous jump Porsche has made with the new GT3. Despite being bigger and 35kg heavier, it not only beats its predecessor by 3.3sec but also the more focused 997.2 GT3 RS (+2.2sec) and even the turbocharged GT2 (+1.2sec).

What’s more, it will do so all day long and with all the electronics engaged; you don’t even need to take it out of Drive, such is the brilliant PDK’s uncanny ability to choose the right gear with Sport Plus engaged. Critics of the 991-series GT3 will point to this as evidence this hardcore 911 has lost its edge, but nothing could be further from the truth. Yes, high-tech trickery like the electronic safety net, dual-clutch gearbox and all-wheel steering has made the GT3’s performance more accessible, but the gizmos haven’t tamed its temper – it’s merely been to anger management classes.

In previous GT3s, novice drivers would eventually have to extract themselves from a wall/hedge/gravel trap, but in the 991 they’ll probably go faster than in any other car with the same or even less effort. Attempt to drive the GT3 to its limit rather than your own, however, and it’s a whole different ball game.

The way it both builds and sheds speed, along with its incredible lateral grip, means it appears to have inexhaustible reserves. You push harder and harder and it shrugs and says: “Great, what’s next?” 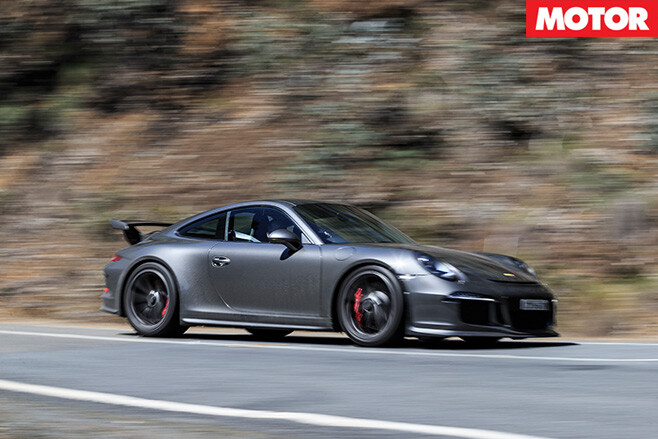 On the road, the pace it’s capable of is frankly terrifying; the rate at which it reeled in a hard-charging DC in the new C63 (itself a rocketship) on one section of Victorian high country beggared belief.

On track it’s arguably even more frenetic, as the car finally starts to move around. The absence of a manual gearbox does remove one layer of complexity, but simply means the driver can concentrate on leaving braking until the very last moment.

The unique weight distribution still requires a level of finesse; 911s are friendlier than ever but still have an enormous amount of weight in the ‘wrong’ place, so it’s important to keep weight on the nose at corner entry to avoid understeer. And whatever you do, don’t lift the throttle in the middle of a fast corner.

You can use the weight to your advantage, though. Brake firmly, flick the steering and the massive 305mm Michelins break free. You have to stay committed at this point as there’s so much grip and traction that if you hesitate with the throttle it’ll spit you back the other way faster than you can say “where did all this grass come from?”. Keep the boot in and it’ll carve a beautiful arc, the engine singing a flat-six symphony; sliding the GT3 for the cameras is one of the most exhilarating experiences I’ve had in a car. It’s reasonably friendly beyond the limit, however everything happens very quickly so it needs your utmost attention.

The scale of the GT3’s ability won everybody over, with four of the five judges awarding it first place. Robbo was the sole dissenter, feeling the 911 was simply too much hard work on the road sections, and instead giving his vote to the AMG GT S. There’s no doubt the GT3 possesses a fairly uncompromising ride, and the road noise can be fairly deafening, too, but most felt it still perfectly liveable and a small price to pay given the performance on offer. You could also argue that the GT3 is too fast to really enjoy on Australian roads – and when second gear stretches to more than 130km/h, you’d be right – but unlike most production cars, it’s so at home on track that, tyre bills aside, there’s no reason not to use it in such an environment regularly. What really cements the GT3’s place as the best performance car of 2015, however, is the way it flatters your abilities up to around eight-tenths, yet challenges and rewards you beyond that.

It’s not good business for one manufacturer to regularly claim our biggest prize – everyone loves a surprise result – but to not award PCOTY to what is clearly the best product would be a far greater sin.

It’s up to the other makers to lift their game, and with the likes of the new Audi R8, Lamborghini Huracan LP580-2, McLaren 570S and Mercedes-AMG C63 S Coupe already pencilled in for 2016, Porsche will have a bigger fight on its hands than ever to retain its title. Then again, when its own roster includes the Boxster Spyder, Cayman GT4, turbocharged 911 Carrera and 911 GT3 RS, well, you’d be brave to best against it. 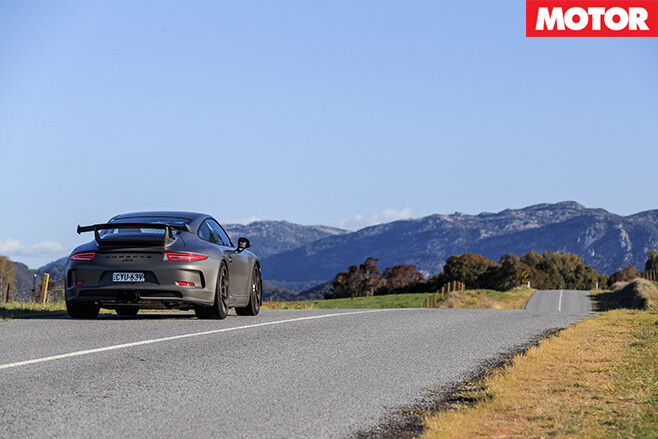 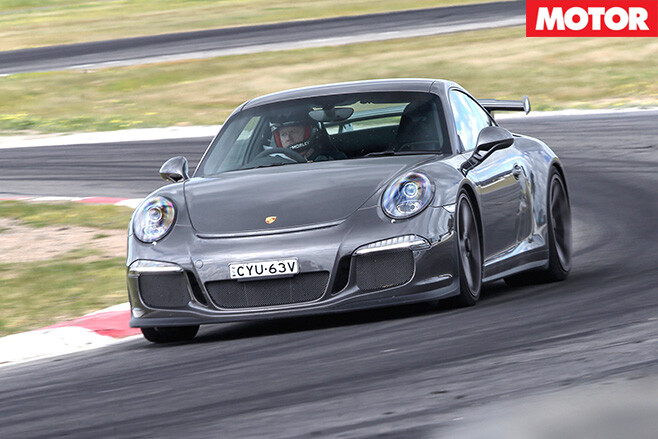 JUDGES' RANKINGS
Dylan Campbell: 1st
“Not far off perfection. If you could bottle the feeling of first gear at 9000rpm, you’d be a billionaire”

Scott Newman: 1st
“More car than I am driver. Civilised enough for the road but unbeatable on a track”

Warren Luff: 1st
“Officially the new fastest car at Winton for MOTOR. Don’t need to say much else”