Archive: The man who kidnapped Fangio

First published in the May 1996 issue of Wheels magazine, Australia's best car mag since 1953.

Wheels sits down with the guy who took one of the greatest Formula One drivers of all time hostage.

In 1958, a year before Castro seized power, his followers were trying to attract international attention. It was the eve of the Cuban GP…

Arnol Rodriguez is talking about the last time he saw Fangio alive: “In February this year, a few months before Fangio died, I was in Buenos Aires and I went to visit him. He was very sick and because he was a national institution, the greatest racing driver ever, nobody was allowed to see him.

“But when I got there I was shown in and Fangio was sitting in a chair, and he was really ill. He looked up, recognised me and with a great effort tried to get up from his chair. He rose halfway, opened his mouth and said ‘Arnol’. He managed another word, ‘Cuba’, and then he slumped back in his seat, hunching his shoulders as if to say ‘I’m sorry’.

“And he could say no more.”

Arnol destroys the cloud of cigar smoke with a wave of his hand and stares into the middle distance. The memory of this last meeting still upsets him and for a moment the only sound to be heard is the splat of the afternoon Havana rain hitting the palm leaves around his terrace. Then he smiles at another recollection, this one from four decades back: "You know, Fangio told us afterwards what went through his mind when we first pointed the gun at him in that hotel lobby.

"He thought to himself: 'I'm about to enter a dangerous curve and in this case, I'd better know how to handle the car.'”

At this, the old kidnapper chuckles.

In February 1957 Juan Manuel Fangio, five times F1 World Champion, and to many the greatest driver ever, won the Cuban GP. A year later he arrived back in Havana, intent on repeating the success, but never got near the start grid. Instead, he became the focal point of one of the strangest incidents in motor racing history when, on the eve of the race, the driver was kidnapped by revolutionaries fighting with Fidel Castro to overthrow Cuba's dictator, President Batista.

Today the surviving kidnappers live quietly in Cuba and, after being tracked down, agreed to recount their version of the extraordinary event which, they say, helped win the revolution and deeply affected Fangio's attitude towards racing.

Of the 13 gang members involved in the Fangio kidnap, the most important survivor is Arnol Rodriguez, who fought alongside Castro and Che Guevara and became, upon the revolution's success, Cuba's deputy Foreign Minister.

During the '50s, Arnol was a student committed to the overthrow of Batista's regime and a member of a revolutionary group called the 26th July Movement.

"When Fangio arrived in Cuba in 1958 he was already five times world champion and incredibly popular," says Arnol. "We realised kidnapping Fangio would give us the publicity to tell the world about the corrupt regime in Cuba. Under Batista the Congress had been disbanded, universities closed and 20,000 had died. Political prisoners were murdered and tortured - it wasn't technical but brutal: people were drowned, had their fingernails torn out, and given electric shocks. I was arrested three times. They tied me in a chair, put a wet towel over my face to suffocate me, and punched me in the stomach so that I was forced to try and breathe in.

"Fangio arrived in Havana on February 21 and we started following him. The idea was to kidnap him as soon as possible and one option was to grab him when he was walking the track.

"But the government had given him two bodyguards when he was out, so that didn't work. Then we heard he would be having dinner in his hotel on Saturday night, and that was our last chance; it had to be that night."

On Saturday evening, February 23, sometime between 7.30 and 8.00pm, Fangio stepped out of the lift into the hotel lobby in the Hotel Lincoln. Angel Paya Garcia, another gang member, remembers the next few minutes well: "Two of the guys, Manuel Uziel and Reynaldo 'Papito' Rodriguez, saw Fangio talking to some friends and decided to make their move. Uziel went up to the world champion, pointed his gun at him and told him to come with him. 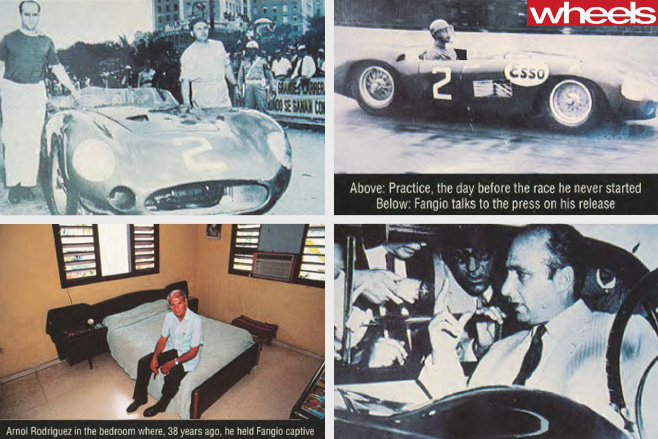 "Fangio thought he was joking until he saw the gun, and when Uziel warned the others that Fangio would take the consequences if anyone tried anything, the racing driver said 'let's go'. If he'd resisted we would have used force because we couldn't let him escape. Would we have used our pistols? I don't think so. We weren't murderers.

"As they left the hotel, Uziel warned everyone to stay inside for five minutes as there were four machine guns pointed at the entrance. All the time Fangio remained very calm."

According to both Angel and Arnol, the deadly serious events then began to take on an air of black comedy.

"We saw Fangio taken to one of the waiting cars and we were meant to follow behind, protecting it," Angel recalls. "But we had trouble getting ours started and when we did get it going we set off at great speed and crashed into a car that was pulling out. Fangio's car got away but a passing police car saw the accident and blocked the road. Quickly I got the driver's gun off him and walked off. We met up with Fangio later.''

Meanwhile, the racing driver was being whisked to the hideaway. Almost.

"Something unexpected happened next," laughs Arnol. "The guy driving the getaway car took a detour and stopped by his house, because he wanted to introduce the great Fangio to his wife and newborn baby. Fangio chatted to the wife and signed an autograph for the baby, then we took him to a second safe house but we couldn't stay there because it was already being used by a wounded guerilla fighter. This guy told Fangio: "Don't worry about anything, you're in good hands.''

A few miles away, at No 42 Calle Norte, in an upmarket suburb of Havana, three women were worried. All members of the 26th July Movement, they had been told their house was to be used as the hideout for the great J M Fangio: "We were still talking about the risks when they walked straight in with him," recalls Aymee Moran, one of the women. "We prepared a meal for him - steak, salad and chips followed by peaches and cream cheese and then after dinner we let him rest. We gave him my mother's bedroom, with its own bathroom. Angel and Manuel Uziel guarded the house the whole night."

With Fangio in their hands, the revolutionaries didn't waste the opportunity to convince him of their cause. During the following day, members of the movement came to the house and explained their grievances to Fangio: "All the time he was very polite and controlled," says Arnol, "and gave full attention to our explanations."

Meanwhile, the kidnap was having the desired effect, as newspapers round the world started to pick up the story. "And out on the streets of Havana, patrol cars were screeching round everywhere, houses were being raided and people arrested. You could feel the anger."

Everything may have been going well for the kidnappers but, as race time approached, the man who should have been on pole was locked in a bedroom several miles away.

"You could tell he was annoyed, but he never showed any anger," says Arnol. "Around 2pm the TV was switched on so that he could watch the race, but soon after the start there was an accident and one of the cars went into the crowd, killing six people. Fangio asked for the TV to be switched off, he didn't want to watch anymore," says Aymee.

"Later there was one moment when we were alone, Fangio and I, facing each other, and his face was very serious."

As the day wore on, something unexpected happened. Fangio and his kidnappers started to get on. Apart from his growing understanding and sympathy for their plight, the world champion also believed in fate, saying that racing was 25 percent luck, and now he began to feel that the kidnap had perhaps been for the best. During practice he'd complained that his Maserati 450S was slewing about on the track because of previous crash damage. "I think part of him believed our kidnap had saved him," says Arnol. "Something was telling him enough was enough and it was time to retire [Fangio did retire later that year].

As Fangio sat in the house, listening to music and tales of Che and Fidel, the kidnappers discussed how they would release him. This wasn't going to be easy.

"We had an informant inside the government who told us that Batista was planning to tum the kidnapping into a propaganda victory of his own," says Arnol. "As soon as we released Fangio, Batista's people would kill him and blame his death on us. Eventually we contacted the Argentinean embassy and arranged to make the handover late at night in an apartment it owned."

At midnight, Fangio said his goodbyes to the women. "We were all nervous," says Aymee. "For us, he was an idol. He said goodbye very kindly and asked for one of the movement's flags as a memento, but we only had a small Cuban flag, which he tucked into his shirt pocket. Then he left through the kitchen door."

"We drove him to the apartment building." says Arnol. "When we went inside, we were facing some embassy officials and the whole situation was very tense. Then Fangio broke the ice. He smiled and said: 'I'd like you to meet my friends the kidnappers'.

"We apologised formally and promised he would be invited back as a guest of honour at the revolution victory and then left.''

Sitting on his terrace, with the evening drawing in and his granddaughter on his knee, Arnol lights up another cigar.

"Fangio and I stayed friends and he invited me as a guest of honour to the Fangio Foundation, and in 1981 he came back to Cuba to meet Fidel and the kidnappers. I remember his brother who said on very few occasions had he seen Juan Manuel cry, but his reunion with the kidnappers was one of them."

Puffing on his cigar, he thinks for a moment. "I don't know if the kidnapping was a significant turning point in the revolution, but the friendship we struck up was important. He knew the admiration we felt for him. He not only forgave us, he understood us."