The headline screams UK Mustang buyers want American V8s – yet the mother country still has nothing on its convict settlement.

Ford UK says it has attracted 2000 forward orders on the approach to the reborn muscle coupe’s November arrival, a match for the Australian forward orders list ahead of our cars arriving one month later.

Poms and Aussies will be among the few countries to snare right-hand drive production, and the waiting list 17,000km away is about the same; order now and it’ll be mid-2016 delivery for you.

A full 70 per cent of UK buyers have chosen 5.0-litre V8 over 2.0-litre Ecoboost four-cylinder. That may be enough to warrant a boastful headline overseas, but in Straya that portion stands at a mighty 88 per cent. 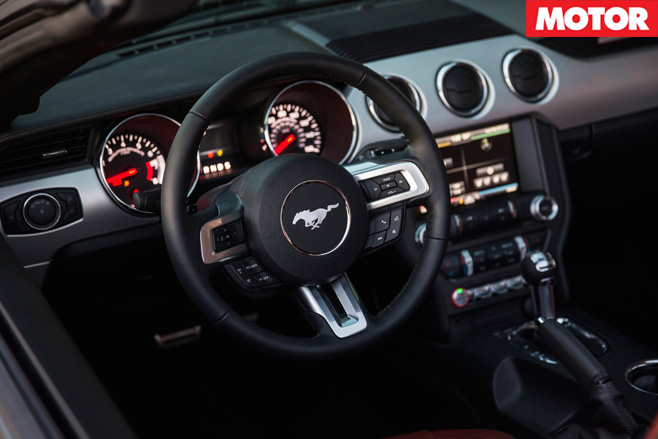 Those from the country that loves warm beer clearly like to use their left hand for other purposes, too, with 45 per cent of buyers choosing a six-speed manual transmission. Here it is a lowly 36 per cent.

Both countries nearly match each other for preference of bodystyle – 84 per cent coupe here, 80 per cent coupe there – with the slight lead overseas very probably due to those customers needing to sun themselves more regularly and at every opportunity.

Proving emphatically how much we love a rear-drive, muscle car, our Ford Mustang sales look set to match Britain despite a total new car market that is less than half the size – 1.11 million new cars were shifted here last year, versus 2.48mil there.

The first right-hand drive Ford Mustangs are just starting to roll off the production line this week in Detroit, Michigan.