THE all-new Mercedes E-Class will be larger, more efficient and bristling with semi-autonomous driving technology when it arrives here later this year, but its biggest ace will be a new generation of in-line six-cylinder engines.

Unveiled on the eve of the 2016 Detroit Motor Show, the tech-laden new-generation E-Class, codenamed W213, takes the tech war against the BMW 5 Series and Audi A6 to another level, and easily outmuscles the brand’s traditional technology flagship, the Mercedes S-Class.

The 2016 E-Class boasts the next-generation of Benz’s Drive Pilot system that can follow another car at speeds of up to 210km/h, as well as the ability to change lanes autonomously. It will even park itself with no one aboard, and can drive itself on roads without clear lane marking at speeds up to 130km/h. 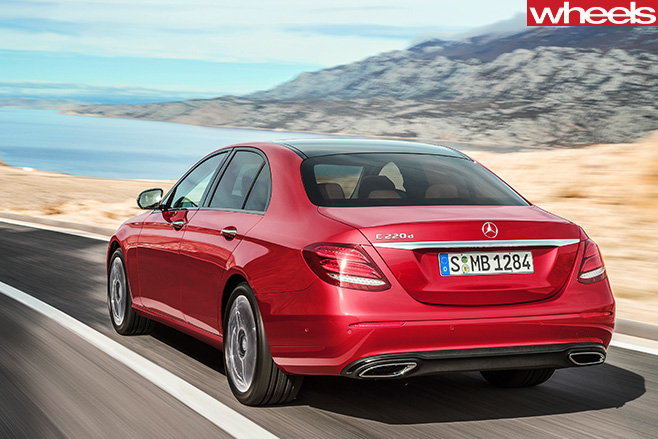 Yet before the age of autonomous cars isn’t quite in your driveway: Mercedes says that the E-Class isn’t completely autonomous – by law it still requires a driver to sit behind the wheel – but it is a reminder of just how close true driverless technology has come.

The bad news is a large chunk of this tech won’t be available from the E-Class’s July 2016 launch in Australia. The self-parking function and autonomous lane change don’t comply with current Australian Design Rules; however Mercedes-Benz Australia is working closely with the government and is confident the systems will soon be legal.

“We’ve got to demonstrate the way the systems work to the government for them to approve it,” said Mercedes-Benz Australia public relations, product and corporate communications senior manager David McCarthy. “If all goes well, we should have all the systems working in the cars by the end of the year. But I’d say next year is more likely.” 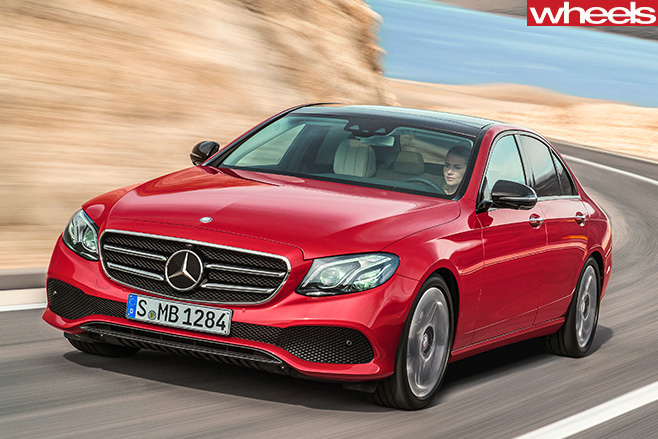 The first batch of E-Class sedan sold here will have some autonomous features disabled, but will have them activated by dealers once they become road legal.

You won’t have to wait for the new generation of in-line six-cylinder engines that will be available from launch in Australia. They start with the turbo-diesel in the E350d, which will be joined by a petrol in-line six by the end of 2017. Also available at launch will be a 143kW/400Nm turbo-diesel and 135kW/300Nm petrol four-cylinder units, with all E-Class models fitted with a nine-speed automatic transmission as standard.

Also joining the model line-up at a yet-to-be confirmed date will be the 350e plug-in hybrid capable of travelling up to 30 kilometres on electric power alone.

Meanwhile, Mercedes Oz says the E-Class Estate is likely to have all-wheel drive as a point of difference to the rear-drive layout of local sedans. 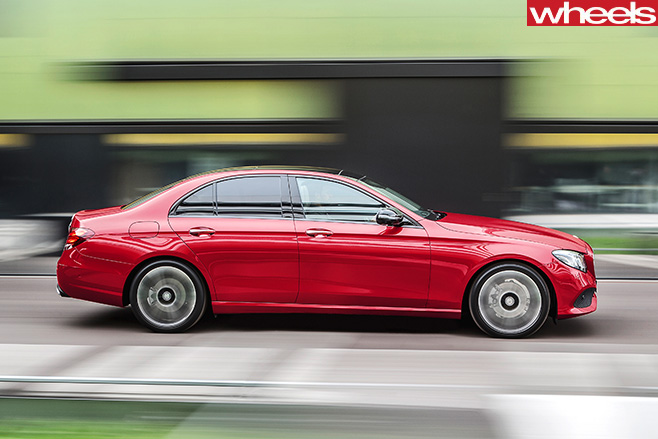 The E-Class rides on the latest version of Mercedes’ Modular Rear Architecture (MRA) used in the current C- and S-Class, and boasts a wheelbase that’s grown 65mm over the current E-Class to 2939mm. Overall length is up 43mm, while height and width have both been reduced. The MRA platform is also expected to drop weight by about 70kg, meaning a kick-off of around 1510kg, while a super-slippery exterior returns a 0.23 drag coefficient, even better than the C-Class’ 0.26.

Buyers will have the choice of standard steel suspension in three tunes, or a new multi-chamber air suspension set-up.

Where Mercedes has been most generous with the special sauce is inside the E-Class’s cabin, which is dominated by an enormous (and optional) “Command Digital Instrument Panel”. Made up of two 12.3-inch HD screens, the digital dash is mounted behind a thin film of mineral glass and is fully configurable, with drivers able to choose between three designs: Classic, Sport and Progressive. 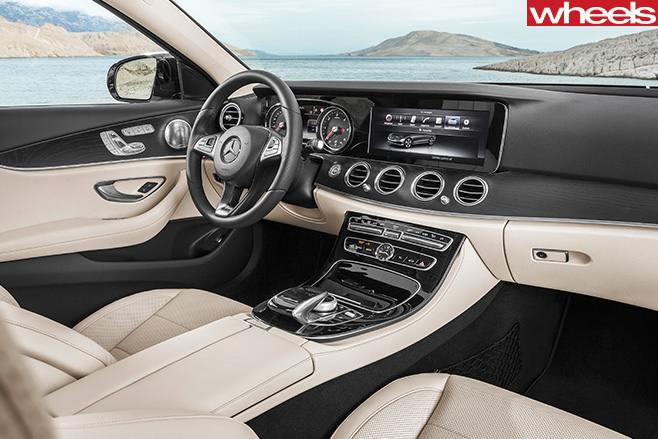 The new E-Class is a radical rethink of how a luxury car’s interior should look, yet retains a welcome dash of familiarity thanks to design cues inherited from the current C- Class and flagship S-Class. The family design cues are also obvious in the E-Class’s handsome exterior.

What’s missing is the use of touchscreen and gesture control technology (like that on the new BMW 7 Series), with Mercedes instead installing two mini-touchpads on the E-Class’s steering wheel. By swiping horizontally and vertically, the touchpads give the driver access to the instrument cluster and infotainment system.

Even better is confirmation that all of the systems that make their debut on the E-Class will quickly be added to the best of the Mercedes range, much like technology from the S-Class has traditionally filtered down to lesser models.

The new E-Class arrives in Australia in July, with prices expected to reflect those of the current range that starts from $80,400.