WE LIKE Mark Reuss. General Motors’ product development boss, and the former Holden chief while it still made cars in Australia, is a proper car guy. He proved just that at the weekend by binning the Corvette ZR1 pace car at the Detroit IndyCar GP before the race even started.

Given the opportunity to drive a pace car, most executives would have babied the thing around, soaking up adulation while the tyres of the following field went colder than Vladimir Putin’s soul. Reuss instead decided that this was the perfect opportunity to demonstrate the ZR1’s acceleration and active safety equipment, fishtailing it into a wall on the exit of Turn 2 and showering the track in debris and shattered dignity.

Read next: Inside the GM Heritage Collection

Reuss leads the design, engineering, safety, quality, research and development, advanced vehicle technology and program management of General Motors and both he and his passenger, IndyCar official Mark Sandy, were uninjured.

General Motors issued a statement shortly thereafter. “It is unfortunate that this incident happened. Many factors contributed, including weather and track conditions.” – the weather was 21 degrees and dry.

Read next: Aussie to head up GM’s Canadian carmaking industry

Reuss isn’t the first senior car industry executive to extravagantly mangle their wares. Sergio Marchionne, CEO of Fiat Chrysler Automobiles, rear-ended a Renault in Switzerland and comprehensively demolished a Ferrari 599 back in 2007.

Both these crashes still pale compared to BMW boss Bernd Pischetsrieder’s aerobatics in a McLaren F1 back in 1995. While driving on a Bavarian country road, he managed to put it into a ditch upside down with his wife and friend aboard. After considering hitting him up for negligent driving, Munich prosecutors dropped their investigation in return for a USD$18,200 donation to charity.

Money might well talk, but as Mark Reuss discovered this weekend, concrete walls can be pretty implacable negotiators. 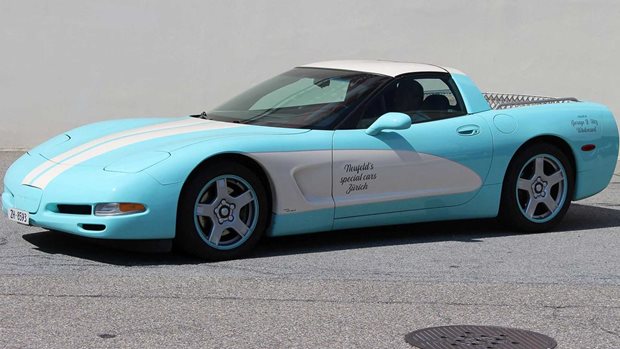