How much more pain can McLaren Honda’s Fernado Alonso endure?

HOPE springs eternal for Fernando Alonso, at least heading into the first race of a newly minted world championship Formula One season and the second of a three-year deal with struggling McLaren Honda.

He sees 2016 as a year of consolidation for the once mighty McLaren as it seeks to reclaim former glory with Honda, itself a huge and successful name in F1, with 71 victories for its engines up to 1992.

Then in 2017, Alonso expects McLaren Honda to be competitive in the world championship. The hunger is there, though he admits he feels like a driver who has contested 253 grands prix. “I’m not 20 years old any more…”

Looking the world like a rock star, with his shades and floppy locks, but with the white-as-white McLaren Honda shirt revealing his real job, Alonso drove up to today’s press conference in the yet-to-be launched new Honda Civic, allegedly the first person to drive it in Australia.  There were absolutely no concerns about the Civic’s reliability.

Wheels asked the dual world champ, now 34, if he could endure another season like the disastrous 2015 one.  A yes/no response wasn’t forthcoming from the mainly diplomatic Spaniard.  “There’s nothing you can do.  It is out of your control sometimes.  It is tough for everyone in the team.  We want to challenge the [2015] situation.

“I want to win.   My role is to make this [path to winning] as short as possible.  We want to consolidate in 2016.  Then in 2017, with big changes coming to Formula One, it’s a bit of a mixed card, and we have a better chance to fight for the world championship.”

He sounds excited about that, and expects the 2017 cars to be completely different – read “better” – to drive.

Meanwhile, there is 2016 to deal with.  “It’s always the same feeling here in Melbourne.  We’re here for the new challenge.”   He talks about challenge quite a bit, perhaps because that’s his life in a team fighting for competitiveness.  “This is an important year, the second year of the new partnership and we need to put in place the knowledge from last year. We are more motivated than ever.”

And there’s the uncertainty of the important changes to the qualifying format, new rubber, and new restrictions on radio chat between the teams and drivers.  Heavens, drivers may have to make their own decisions on the run.

“Testing has been quite positive for us, especially after last year when we didn’t manage to complete the programme.  There are limited days for testing, but it’s the same for everyone.  Only four days for each driver before the world championship begins.

“There’s a lot to learn [in testing].   Some concepts of the car are quite new to us and it takes time to unlock the performance.  I am very happy with the team effort on the performance side. That’s a step forward.” 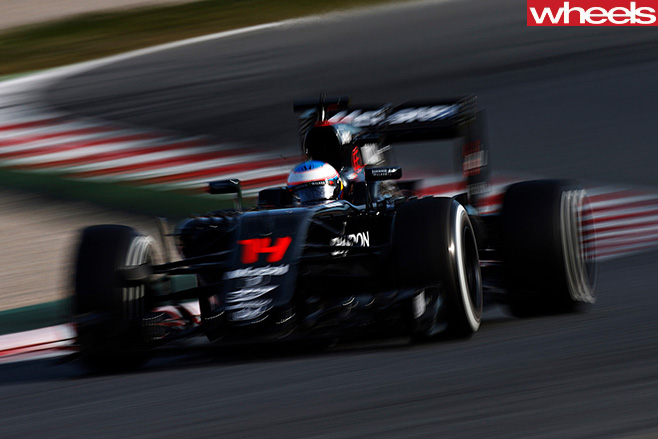 But then tellingly: “We are only happy if we win and we are not in that position this year.”

But incoming McLaren Honda team boss Yusuke Hasagawa insists that test data showed the Honda was already more reliable, before adding that, yes, in some races, they will need to push the limits in search of higher performance.

There have been reports that Alonso is unhappy and looking for a way out, and follow-up stories that he is honouring his deal.

“I joined McLaren Honda to fight for the world championship,” he says.  “This partnership has been very successful in the past.  I know the ‘family’ we have, the talent we have.”

Alonso also has been critical of the change to the sudden-death elimination qualifying system for this season. But at the Melbourne media call, he seemed resigned to making it work. “It’s the same for everybody,” he shrugged, declaring the pressure is on from the get-go.  “You must immediately put in a fast [banker] lap that you hope will be good enough.  You must perform at 100 percent.”

But Alonso isn’t expecting any big surprises, and no shake-up of the grid’s pecking order.  Still, he has indicated a wish for simplicity in qualifying, perhaps even a reprise of the one-lap format, the “superpole” process of a decade ago.

He also anticipates the limits on radio transmissions won’t change much, because some restrictions were in place last season. “I don’t think this will give more power to the driver [to make or change race strategies]. “ He says what will happen is that teams will prepare their strategies more strictly.

Before leaving for Australia, Alonso declared his distaste for the erratic changes affecting F1, slamming the complexity of the rules, which he said was confusing for spectators.

He suggested people everywhere want to turn on the TVs and watch battles between drivers of big cars, on big tyres, making lots of noise.

On the same theme of using the lessons of the past to produce solutions for today, Alonso has thoughts but “no magic solutions” to fix the perceived problem of the F1 show.

“The main [negative] point for me is the cars.  They’re not as fun to drive as they were a couple of years ago.  It’s how the car feels, the tyres, the weight…they are 135 kilos heavier than six, seven years ago.”

Come on, Fernando…wave a magic wand and re-introduce any past era of F1 car, what would that be?   No hesitation.   That would be 2003- 04-05 cars with V10s with maybe 1000 horsepower.  Noisy powerful, fantastic to drive.  People enjoyed those kind of cars. The drivers were treated like superheroes.

But then the optimism returns.  “Next year, the cars should be four, five seconds a lap faster than this year.”  Better, but no magic solution, he admits.