But, wait… Red Bull Racing has lodged an appeal against the Jamie Whincup time penalty

But, wait… Red Bull Racing has lodged an appeal against the Jamie Whincup time penalty.

IT WAS another spellbinding, knife-edged end to the annual Bathurst 1000 with Will Davison staving off Red Bull Racing’s Shane van Gisbergen whilst finding the last few drops in the fuel tank of the Tekno Autosports Commodore in the closest finish in the history of The Great Race – 0.14sec.

Second place was the best Bathurst finish for Van Gisbergen and Premat and the result moves the Kiwi comfortably 139 points ahead of Whincup in the championship.

It was Davison’s second Bathurst 1000 win and the first for Webb, who had seen a likely victory cruelly taken from him two years earlier.

Webb and Tekno are also the first driver and team to win the Bathurst 12 Hour and the 1000 in the same year. 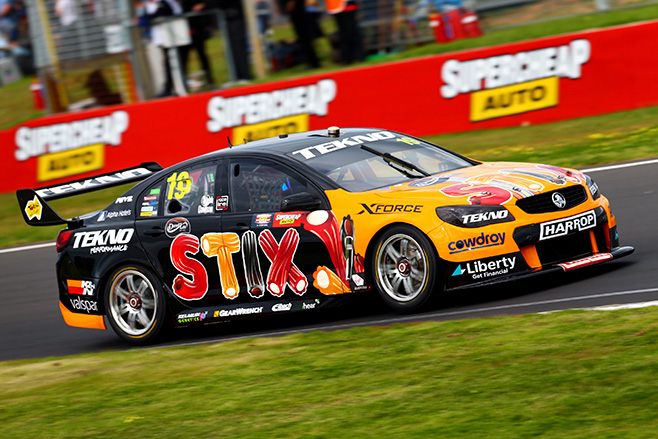 Davison, who drove flawlessly to keep out one of the most aggressive (and fastest) drivers in the competition, was delighted to win for the little Tekno Autosports squad.

“I am almost speechless,’’ Davison said, after the dramatic nail-biting win from 17th on the grid.

“That was so stressful. I knew if I lifted to save any more fuel that Shane was going to get me. It coughed coming into the last corner and I ran out of fuel while crossing the line.’’

But if you want weirdness, consider this; Davison/Webb did not lead any laps of the race. Not even the last one.

First across the line – a few seconds up the road -  was the Red Bull Commodore of Jamie Whincup (sharing with Paul Dumbrell).  They’d controlled the race for the majority but had been using plenty of fuel to do so.  After a brace of safety cars shook up the order and fuel strategies, Whincup pitted on lap 135 for fuel, tyres and fresh brake pads, setting up a big charge to the chequer for #88.

With 24 laps remaining, Whincup was fourth behind DJR-Penske’s Fabian Coulthard (who needed to stop for fuel and ultimately finished sixth behind the sister Shell Falcon), Scott McLaughlin (Volvo), and Garth Tander (HRT Commodore) with Davison next.

Man-on-a-mission Whinchip moved past Tander to third, and a few laps later came the incident that people will talk about for years. 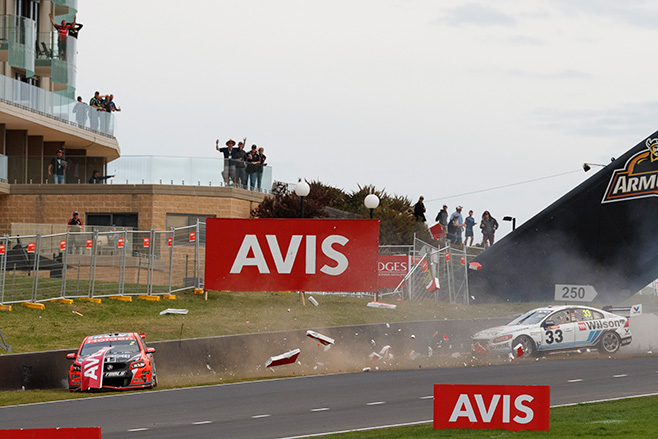 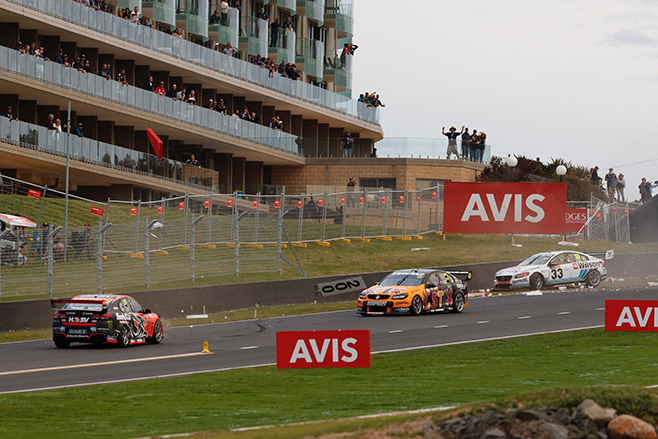 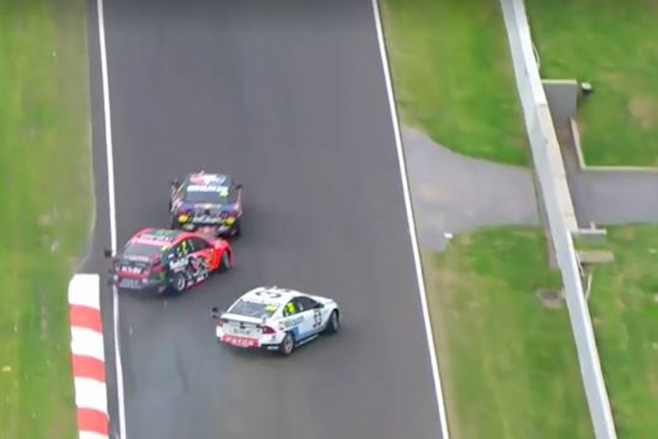 Into the Chase on lap 150, Whincup fired down the inside of McLaughin who edged left, forcing the Holden across the apex. Side by side, they touched firmly, the Volvo hip-and-shouldered on to the outfield.

Powering on to the foot of Con Rod, Whincup appear to slow in what was seen as an attempt to redress.  Aaah, yes, that quaint rule where drivers become their own judge and jury.

In a split second Tander opportunistically jinked right just as McLaughlin accelerated back on to the bitumen. All three crashed together, with Tander and McLaughlin spinning and clouting the wall.

Whincup survived and appeared to be heading for another Bathurst 1000 win…until he was deemed at fault in the incident, and slammed with a 15 seconds post-race time penalty.

In the few laps remaining, Whincup was no chance to gap Davison and the rest by 15 seconds. 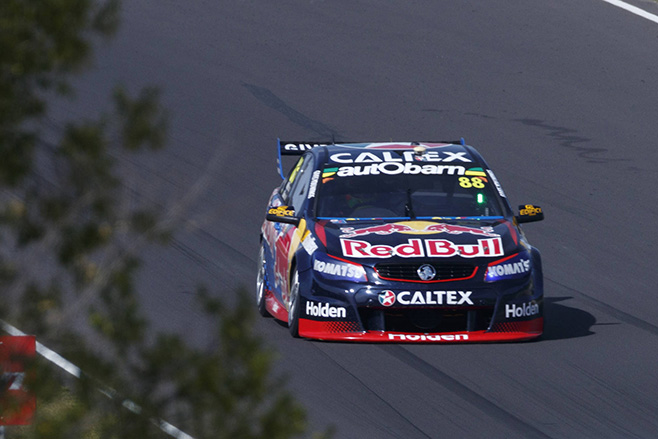 It was third year in a row Whincup’s chances of victory have been sunk in the closing stages of Australia’s biggest Supercars race. The six-time champion eventually finished 11th in a field decimated by late-race crashes and mechanical issues.  Nineteen of the 27 starters were classified as finishers.

Everyone has an opinion on the three-way contretemps, including Triple Eight Race Engineering boss Roland Dane, who immediately lodged an appeal against car #88’s time penalty, putting the Tekno victory in some doubt.

McLaughlin, who finished 15th, is also under investigation for an unsafe re-entry to the circuit.

Dane, whose organisation also built the Tekno Commodore, indicates his appeal is based on what he senses are inconsistencies in the way the rules have been applied. 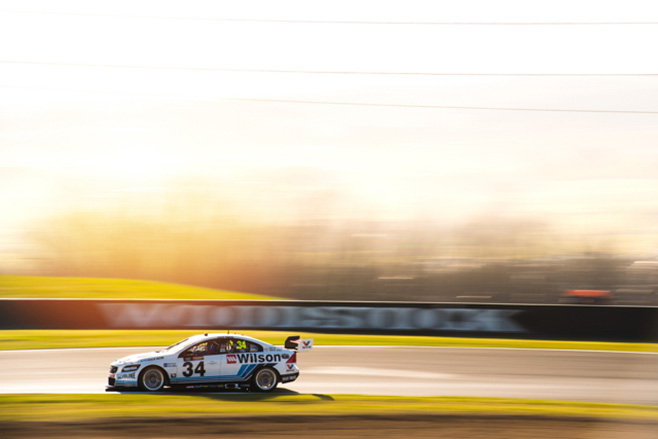 Dane questions whether Whincup was at fault in the initial touch with McLaughlin because of the Volvo drivers clear move to block in the braking area before the slow left hander.

The team owner also says in such situations the driver has the choice to redress, and if he can’t, they are subjected to a 10-second penalty. Not 15.

Supercars Australia has confirmed the appeal will be heard by the Supercars court of appeal which is appointed independently and run by CAMS.  A date has yet to be set to hear the appeal.

Meanwhile, the results of Sunday’s race are final, but subject to the appeal.

Let’s hope this doesn’t drag out like in 1987, when two months after the race, Peter Brock was finally awarded the win when the bent-like-boomerangs Eggenberger Sierras were deemed illegal.

This year’s 1000 had been a bit of a snooze until beyond half distance when it exploded into life with a savage outbreak of crashes, safety cars, dramatic moves and…controversy.

Andrew Jones in the BOC Commodore thumped the wall heavily at the metal grate on lap 92, to trigger the first safety car of the race.  We counted six before the end.

Until then it had been a Whincup/ Dumbrell tour de force.    They will have wished the last hour was as straight forward as the first four. 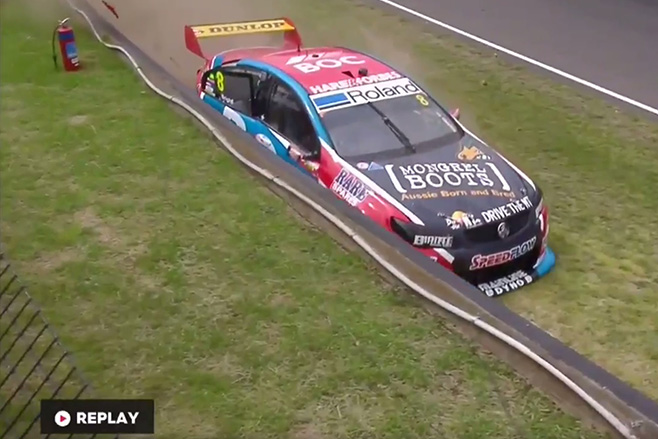 Van Gisbergen went to the Mountain for race 21 of 29 a bare seven points ahead of Jamie Whincup in the title fight, with Craig Lowndes lurking in third.  Bathurst, carrying 300 points, was always key to championship aspirations.

Most of the teams elected to have their full-timers start the race, to minimise risk.  Some played cute.  Gamesmanship was rampant. Dumbrell was going to start the pole car but after a late call minutes before the start, Whincup leapt into his race suit and climbed aboard Holden Commodore #88.

Strategy would vary a little but based around fuel consumption of around 4.6 litres of E85 every 6.2km lap.  So a minimum of seven pit stops and stints of around 22-24 laps.

Whincup and Dumbrell went as close to perfection as you find in the hectic lead-up to the 1000. Whincup was the pacesetter from the opening practice, through qualifying, and in the Top 10 Shootout.  Dumbrell was quickest in the co-driver sessions and won Saturday’s second-string Dunlop Series race. 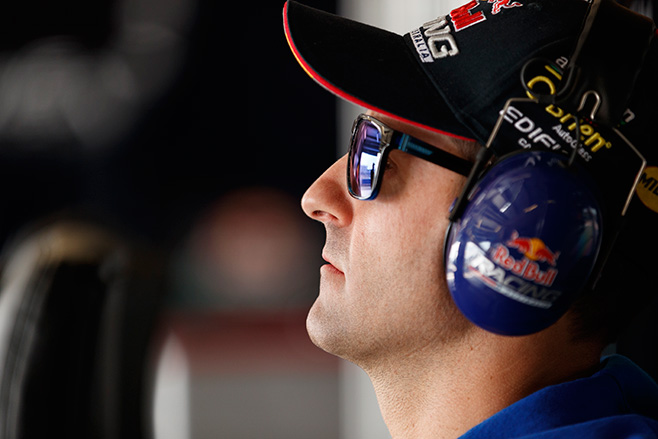 The Shootout late Saturday afternoon was memorable not only for the fastest pole in history – Whincup’s 2m 05.4263s – but for the wild nature of so many of the laps by the 10 fastest drivers. Never before have so many traded conservatism for the chance of glory.  None of the 10 runs were blemish-free, and a few were simply erratic. But Whincup found the right mix of pace, daring and common sense, edging Scott McLaughlin by just 0.0652s.

The huge name missing from the top 10 was that of Craig Lowndes, winner with his co-driver Steve Richards 12 months earlier.  Through practice and qualifying Lowndes struggled to find the sweet spot, languishing back in 21st but perhaps partly reassured by the knowledge that the Bathurst 1000 has been won from way back.  It was false hope, a gearbox issue ruining his race. 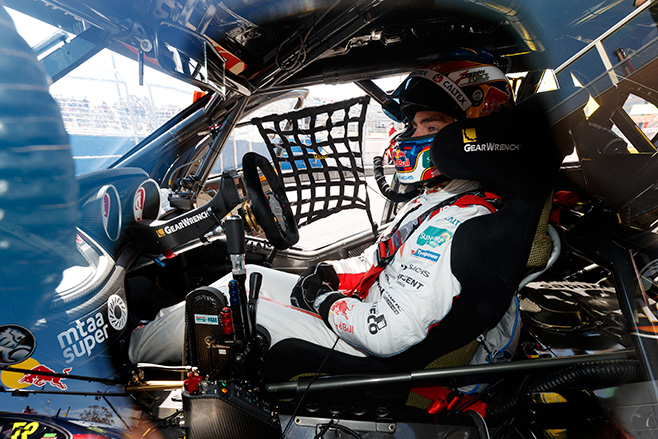 Other former Bathurst winners were also back a bit too, reflecting the competitiveness of the qualifying battle. Rick Kelly/Russell Ingall started 20th; Nick Percat 22nd…

Twenty-seven cars started including the wild card entry of all-female crew Simona de Silvestro and Renee Gracie, this year aboard a Nissan Altima. They started 26th and finished 14th.

Five of the 54 drivers were Bathurst 1000 race rookies.

Matt Campbell was a busy and successful young man at Mount Panorama, taking his Porsche Carrera Cup car to three impressive wins over the weekend, extending his lead in the points

Campbell, who was also making his Bathurst 1000 debut, co-driving with Todd Kelly for Nissan. 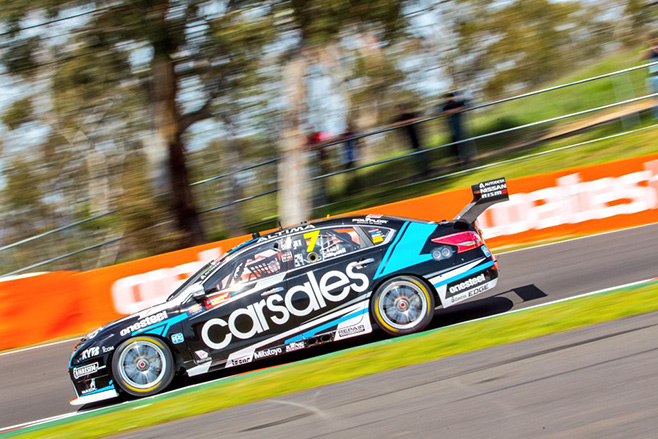 Will Brown continued his bold form in the Toyota 86 one-make series, clean sweeping the three Bathurst races, but only after Aaron Seton was pinged five seconds for an incorrect restart in the first sprint.

In Sunday’s six-lapper, and despite his youth and pressure from invited driver Steve Johnson, Brown held his line and nerve over the final few corners to take a narrow win and extend his series’ lead with one round remaining, in Sydney.