THE Canadian Grand Prix has produced no surprises at the top of the points table. Despite crashing in a rain-soaked Friday practice session, pole-sitter Lewis Hamilton, and Mercedes teammate Nico Rosberg locked out the front row of the grid to effortlessly take a 1-2 race result yesterday. Kimi Raikkonen, whose Ferrari started third on the grid, looked set for the final place on the podium until he spun at the hairpin and finished fourth, behind the Williams of always-there Valteri Bottas in his first podium of the season.

Sebastian Vettel, in the other Ferrari, was relegated to the back of the grid for a red flag infraction during practice, but put in a typically gutsy drive to finish fifth.

The Circuit Gilles Villeneuve, run around an island in the middle of Montreal, is noted as the venue for Aussie Daniel Ricciardo’s maiden victory, but will go down as his worst result so far this year.

Facing penalties if he used another Renault engine in his Red Bull, he qualified down in ninth position, and for the first time this year finished out of the points in 13th as his car progressively lost pace. While his fifth in the previous race at Monaco remains his best result this season. Teammate Daniil Kvyat shook off his poor start to the season to finish in the points, even if it was a lowly ninth. Ricciardo has been vocal about Red Bull needing to do a lot of work to recapture the team’s previous form.

The best racing, though, was further back in the field. Felipe Massa pushed his Williams though the field from 15th on the grid to take sixth.

Both Lotus drivers collected points, with Pastor Maldonado in his first finish of the season in 7th and Romain Grosjean – who looked set for fifth but finished 10th after colliding with Marussia’s Will Stevens and incurring a five-second penalty, while Nico Hulkenberg’s Force India finished eighth.

Rosberg’s shortfall in the championship has grown to a still-not-insurmountable 17 points, but his chances are looking increasingly slim against an more confident Hamilton, who chanted with the post-race crowd – a stark contrast to his demeanour after the Monaco pits debacle.

The next race will be in a fortnight at the Red Bull Ring in the Austrian mountains.

AUSTRALIAN-born Kiwi Scott Dixon has won the latest round of IndyCar, proving the old adage that everything is bigger in the Lone Star State – if the speeds achieved at the Texas Motor Speedway are anything to judge by.Despite fears that new aero packages would again send cars flying, Dixon won with an average speed of 191.940 mph – that’s 309km/h. 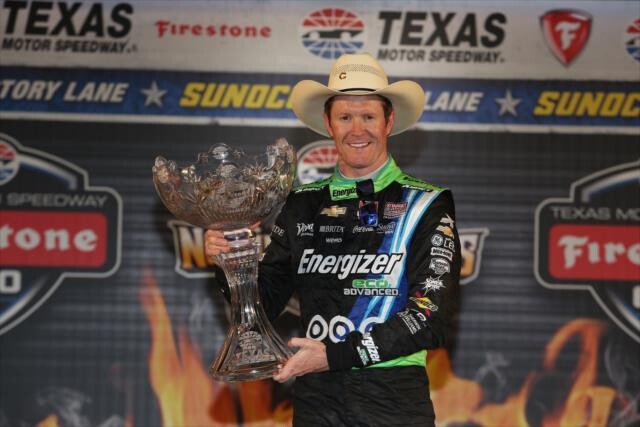 While Dixon only qualified seventh, he led for 97 of 248 laps in what was one of the fastest races ever held to cement his second win at this circuit, second win of the year and his 37th IndyCar victory.

In a race that ran under caution only once to clear debris, Dixon crossed the line 7.8 seconds ahead of Ganassi team-mate Tony Kanaan, with Helio Castroneves third ahead of his Penske teammate Juan-Pablo Montoya.

The key element in the winner’s pace versus the Penske cars lay in the higher downforce used by the Ganassi team, which achieved its 99th IndyCar victory. The first five finished on the lead lap, with Marco Andretti fifth and teammate Carlos Munoz sixth, fresh from his first win at Detroit last weekend.

Dixon’s win has pushed him within 43 points of series leader Montoya, and 8 behind Australian-born pole winner Will Power – Power’s third time fronting the grid in succession, and the fourth of his season.

After leading for seven laps, Power’s pace abandoned him, leading to a disappointing 13th place finish after a brush with the wall. Fellow Aussie Ryan Briscoe had a better day of it, running as high as fourth from 19th on the grid, finishing eighth as substitute for the injured James Hinchcliffe.

MARK Webber (pictured) has posted only the 20th best time for Porsche a Le Mans test day that deteriorated from a dry circuit to a wet one. 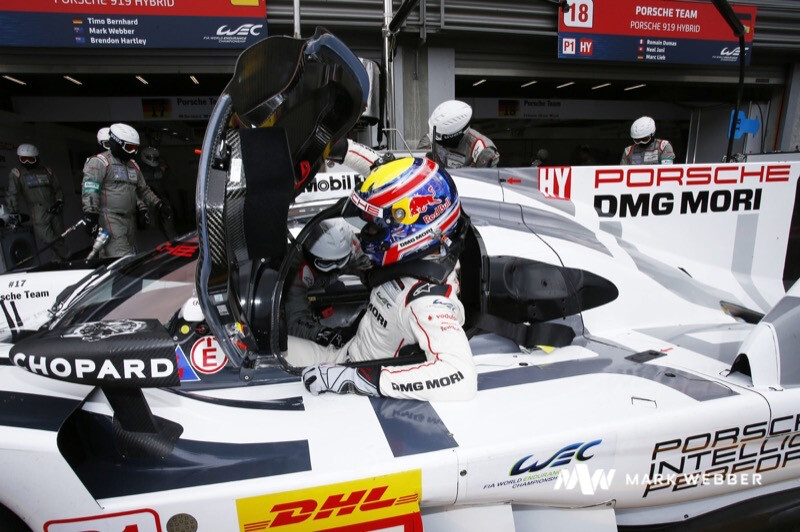 In contrast, his 25-year-old NZ teammate Brendon Hartley secured the fastest time of day, a rousing seven tenths up on the 2014 pole lap time and almost nine tenths ahead of the second-placed Porsche.

Of the 64 teams entered, as expected Porsche and Audi took the first six places, followed by two Toyotas. Of particular interest will be the performance of the radical front-wheel-drive, rear-wheel electric assist Nissan steered by a group of PlayStation enthusiasts who achieved a creditable 18th first time out.

Free practice will start on Thursday Australian time, with the race to start at 11pm our time on Saturday.

UNDETERRED by lacklustre response to the Aussie V8s in Texas, China, Abu Dhabi and Bahrain over the years, V8 Supercars supremo James Warburton has announced a street circuit event in Kuala Lumpur from 2016 to 2019, along with another race at an undisclosed Asian venue from 2017.

To be named the “KL City Grand Prix” (potentially confusing, given that the Malaysian Grand Prix takes place at KL’s Sepang circuit), the event will consist of a demonstration race by five V8 Supercars on August 7-9.

While the V8 Supercars calendar is likely to expand with the inclusion of more local and overseas events, it is not likely to expand to the extreme number of events favoured in some American series such as NASCAR.

Racing should be more intense, with points awarded for both Saturday and Sunday races instead of only a Sunday main event. V8 Supercars currently only has one overseas event -- in New Zealand -- alongside 14 in Australia.

Warburton says the series is not overreaching itself by going overseas, as in contrast to sending cars to the Middle East or the US, freight to Asia is affordable and viable.

THE senior race in the Isle of Man TT – the one that is spoken of in hushed terms and with references to Joey Dunlop – is slated to take place next Friday.
However, the first event in the TT week was the Superbike race, won in record time this year by 46-year-old Kiwi Bruce Anstey.

This was his 10th career victory in Isle of Man TT, but his first on a 1000cc bike.
The race was postponed a day because of strong winds, but was run in perfect conditions on the Sunday over six long and astoundingly dangerous laps.

The race was red flagged after only six bikes had crossed the finish line – Michael Dunlop, nephew of the legendary Joey, crashed after running as high as third. He was able to limp away to an ambulance, not seriously injured.

Michael’s brother William finished fifth, underscoring the “family business” nature of the TT to the Dunlop clan of Ulster.

Joining Anstey on the podium were Ian Hutchinson and James Hillier, who both led at various times.