DANIEL Ricciardo has every right to feel gutted, robbed, let down by his Red Bull team, the same Red Bull lads that on three previous weekends in his career helped him to grand prix victories.

Motorsport is like that. Sometimes everything clicks beautifully.  And occasionally there are glitches, stuff-ups, bad calls, finger problems…

“I actually hate being like this,” Ricciardo said later. Much later. “I hate being miserable. I got a podium in Monaco. I should be extremely happy, grateful and thankful. I’ve been fast now for two races and that’s the positive, but again no win so I’m a little bit sick of being fast and not getting any real rewards. I don’t like being the sad story.”

For two weekends, Daniel Ricciardo has felt the victim.  Rightly so. He knows he could have been a winner of the Monaco Grand Prix, the most prestigious on the planet.  Instead, the beneficiary of the Red Bull stumble was Lewis Hamilton, who repeated his fortunate 2008 Monte Carlo victory to record his first win of the year, igniting his 2016 challenge.

Ricciardo had done everything wonderfully well. His pole-winning lap was a doozy. In the race, after the grid did seven laps behind the safety car, Ricciardo was on top of his game in wet-yet-drying conditions. And then there was that dreadful miscommunication that cost him the race.

Called to the pits to switch to slicks, Ricciardo was stunned to discover the team unprepared. There was an agonising delay as the crew rushed the replacement wheels and tyres to the box, Ricciardo rejoining behind Hamilton. That was the cruel.

Ricciardo again: “On the extremes [full wets] in the beginning we were quick and I did everything I had to. I asked a couple of times how the people on inters [intermediate wets] were doing but they said that my pace was really good on the extremes so we stayed out and that was no problem.”

Ricciardo kept an excellent pace on the full wets until lap 24, when he switched to inters, dropping behind Hamilton, who made the call to stay out to lap 31. Then, with a dry line appearing, he made his one and only stop for slicks. Chasing the overcut for Ricciardo, Red Bull called him in a lap later after he fired in a super-quick lap. “It was all prepared and then I came into the pits and there were no tyres,” said Ricciardo.

Hamilton conceded he got lucky: “If he [Ricciardo] hadn't had a bad stop I wouldn't have been ahead. But these things happen for a reason – and today the reason was that 44th win.”

Ricciardo pushed hard to catch and pass Hamilton – two tyre lockups were testament to just how hard he tried.

But it was Lewis Hamilton’s day again. And Mercedes.

“What a special day... truly one of the hardest races I can ever remember having,” said the reigning world champion. “To stay in the zone, not make any mistakes and come out on top is just unbelievable. I walk along here every day and think about the greats who have won this race – the likes of Fangio, Moss, Hill and Senna – and it's a truly amazing feeling to have my name added to that list again.” 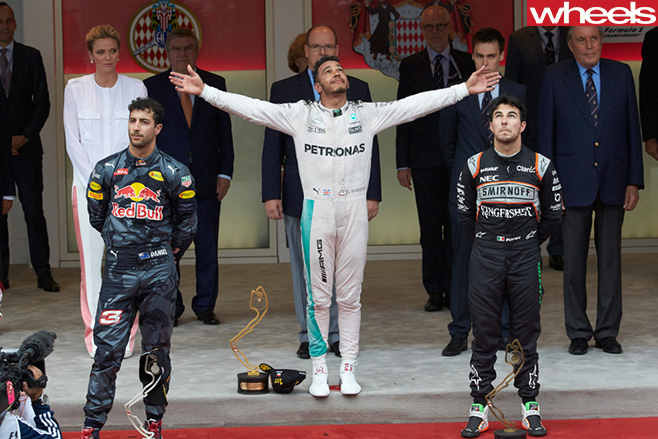 Ricciardo’s Monaco highlight came a day earlier. His maiden pole was a corker, coming with a faultless blindingly swift and millimetre-perfect attack on a claustrophobic, barrier-rimmed layout where driver input counts for more than at any other circuit.

It was Red Bull’s first pole since Brazil in 2013, when Sebastian Vettel was fastest at what was Mark Webber’s last F1 race weekend.

Saturday in Monaco continued Ricciardo’s 100 percent record of out-qualifying his teammate in 2016 – Daniil Kvyat for the first four races, and Max Verstappen for the last two. The boy wonder found the streets of Monte Carlo no easy conquest, crashing once on Saturday’s practice and then repeating the messy day in qualifying, consigning himself to a replacement chassis and pit-lane start. Who trotted out that line about the peacock and feather duster…?

Then in the race, the teenager crashed again. He is still way short of the complete driver. Youthful exuberance doesn’t buy experience. 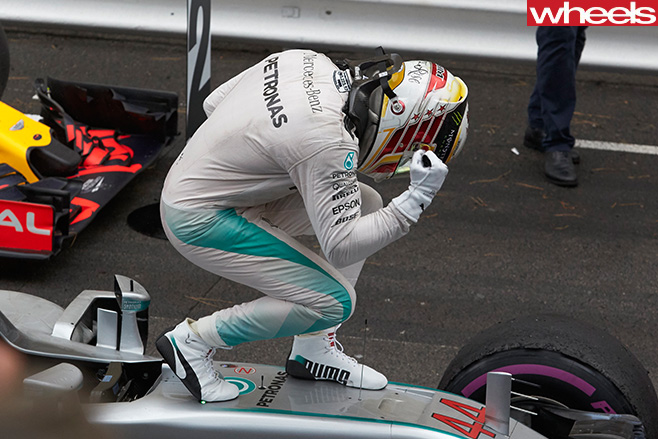 Verstappen is perhaps fortunate that these days there are few unforgiving tracks on the calendar to remind drivers of the need for pin-point accuracy.

Happier than both Red Bull drivers was Sergio Perez, who grabbed third after a terrific drive in the Force India Mercedes, keeping Sebastian Vettel’s Ferrari off the podium. McLaren Honda had reason to be happy too, with Fernando Alonso (fifth) and Jenson Button (ninth) in the points, split by Nico Hulkenberg (Force India), Rosberg who had earlier brake issues, and Carlos Sainz (Toro Rosso).

After a spell of reflection, Ricciardo finally plucked a positive from his frustrating day.  “To end it on a positive note, we are fast in all conditions, which is good.”

Let’s see what Canada brings.  Meanwhile we now know that Ricciardo’s perma smile is not that permanent. 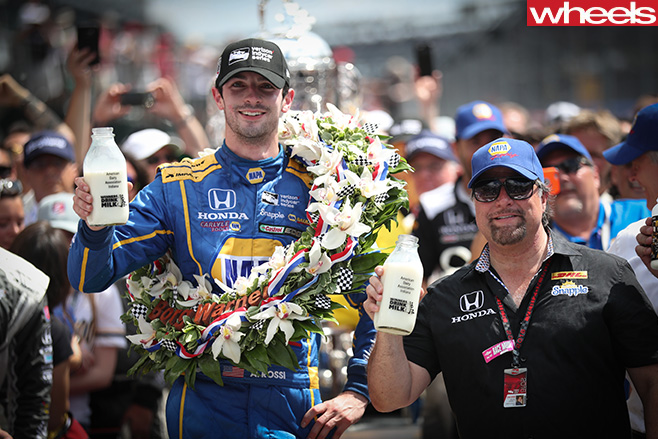 Rookie  Alexander Rossi – the American who moved to IndyCar racing after failing to cement a regular ride in Formula One this year – has pulled off a remarkable win in the 100th Indianapolis 500, running out of fuel as he crossed the line.

Rossi had so little fuel left, he needed a tow to get to victory lane to celebrate in front of the first sell-out crowd – 350,000 – in Indy 500 history.

The 24-year old is the first rookie to win the Indianapolis 500 – the so-called Greatest Spectacle in Racing – since Helio Castroneves in 2001. 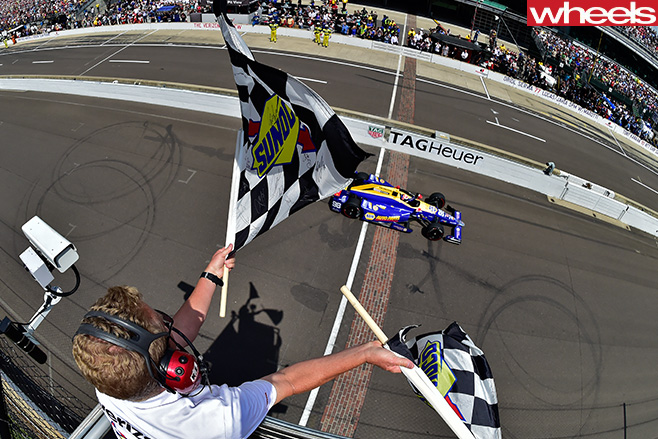 A year ago, Rossi had been in Monaco, schmoozing his way along pit row in an attempt, unsuccessfully ultimately, to lock in a full-time drive in F1, although he did start in five races for Marussia towards the end of 2015.

"I have no idea how we pulled that off," Rossi said in victory lane after his Bryan Herta team (in an alliance with Andretti Autosport) gambled on eking out the fuel to the flag.

"Ryan [Hunter-Reay] was giving me a tow at the end. We rolled the dice and it came through.

"I'll cherish the fact that at one point we were 33rd," said Rossi, who also gave Honda its first win of the season. "We rolled the dice and came through and made it happen. This is unbelievable. I have no doubt it's going to change my life." 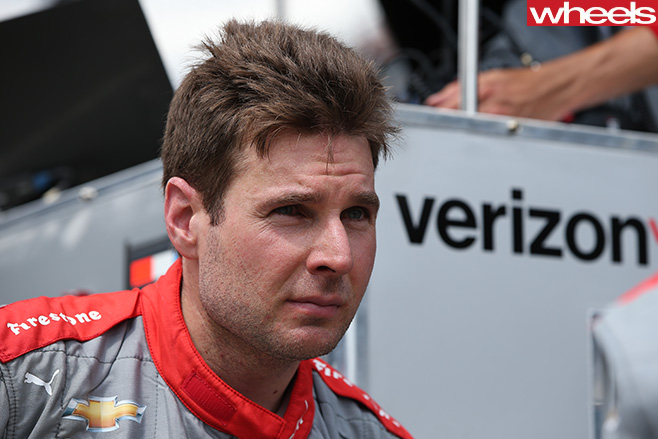 Colombian Carlos Munoz, his Andretti Autosport teammate, finished second from Josef Newgarden takes third, followed by Tony Kanaan, Charlie Kimball and JR Hildebrand.   James Hinchcliffe, the pole sitter who missed the 500 last year after a near-fatal crash in practice, faded to seventh despite having one of the fastest cars out there.

The 22-year-old ran as high as 14th. He was one of many who had to make a late stop for fuel inside the final 10 laps. 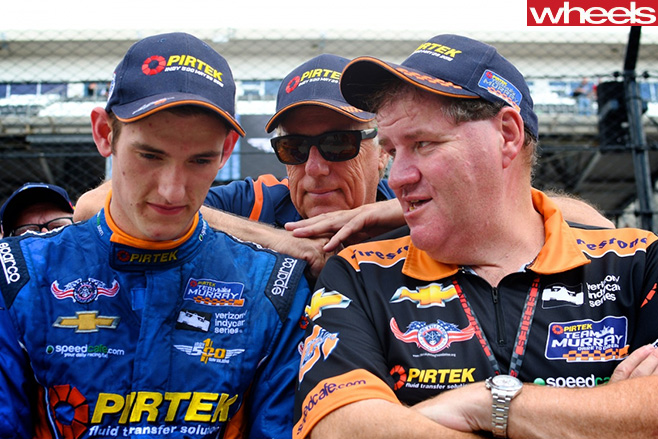 “It is incredible to think that we finished this race. Out there was a little surreal to be honest,” Brabham said.

There were the usual incidents including the crash on lap 64 that ended Juan Pablo Montoya's shot at becoming a three-time winner.

Rossi wasn't really a factor in this race until when it counted.

With the laps running down, the 500 clearly shifted to a fuel mileage game of nerve as Newgarden and Munoz both swapped the lead repeatedly. But both had to pit for fuel, and Rossi inherited the lead. 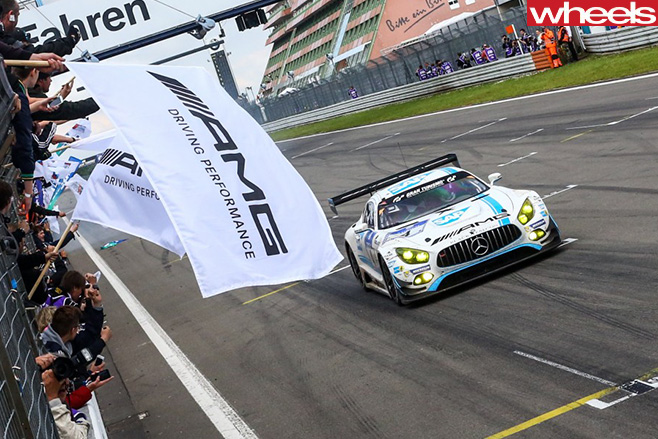 With an audacious passing move on the last lap, one-time V8 Supercars regular Maro Engel has led the No.4 Black Falcon Mercedes AMG GT3 squad to a daring Nurburgring 24 Hours triumph, a race that at times bordered on the crazy and bizarre.

Engel was behind the No.29 HTP Mercedes on the final lap, but sensationally zinged inside Christian Hohenadel to snatch a thriller. 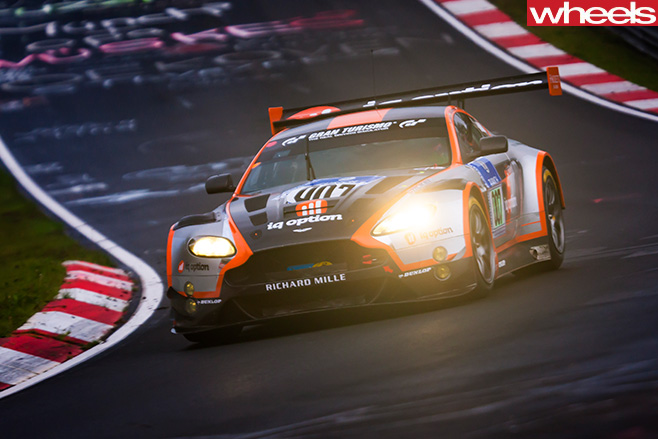 Despite brushing a backmarker in the closing stages, Engel eased away to claim victory for the No.4 Mercedes shared with Bernd Schneider, Adam Christodoulou and Manuel Metzger.

The winning margin of 5.697s was the tightest in the history of the 24-Hour race.

Mercedes dominated throughout and nailed a one-two-three-four sweep. 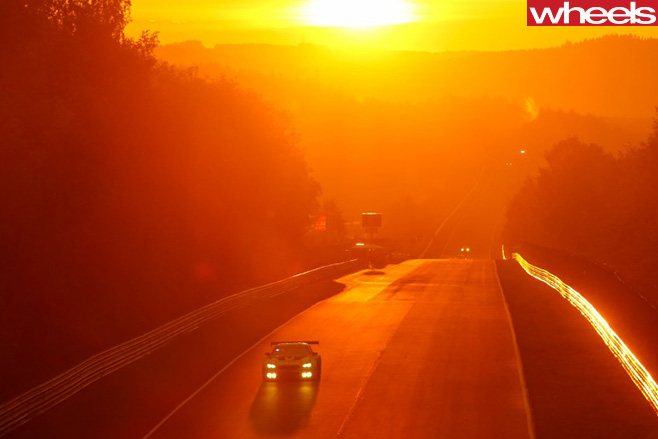 The endurance race started at 3.30pm on Saturday with polesitter Engel leading away the field under sunny skies. But then, after 49 minutes, a huge hailstorm slammed the circuit. Parts of the 25.4-kilometre combination of the Nürburgring GP circuit and the Nordschleife were impassable due to heavy hail.  Dozens of cars slipped off the track. 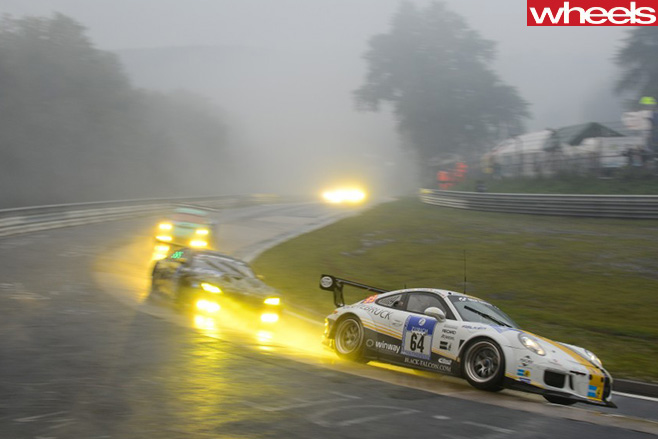 Rainmaster Bernd Schneider reported: “The weather is just crazy. Even if it may sound weird, the best option is to just stop.”

That is regulation Nurburgring, aka The Green Hell. 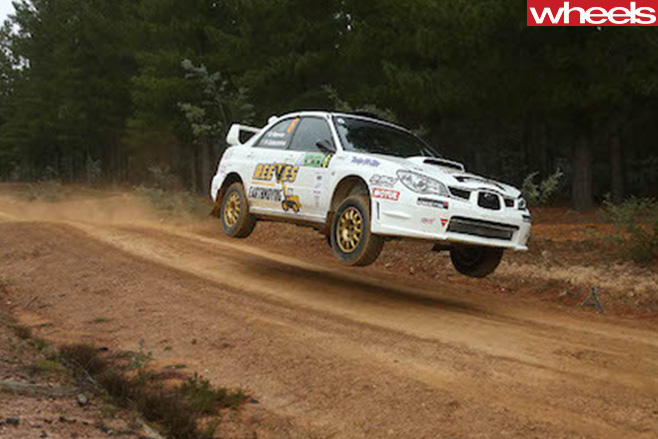 Brendan Reeves and co-driver Rhianon Gelsomino bounced back from gearbox problems in Saturday’s first heat of the National Capital Rally to take out heat two – and overall victory in the second round of the Kumho Tyre Australian Rally Championship (ARC) thanks to a dominant performance over Sunday’s stages.

Despite their gearbox dramas in their Subaru Impreza WRX STI on the first day, Reeves took second behind Simon Evans (WRX) on a day when single-digit temperatures tested die-hard rally fans out in the forests.

Overnight, Reeves and his team replaced their broken “dog” gearbox with a standard one, courtesy of Tasmanian Craig Brookes.

Though Reeves had to modify his driving technique – left foot braking isn’t possible with a standard gearbox – he put championship leader Evans (Subaru) under pressure early into Sunday’s heat two stages. The multiple Australian champion lost time when he went wide and ended up in a ditch. From that point Reeves was never headed, taking the Sunday honours by more than a minute. 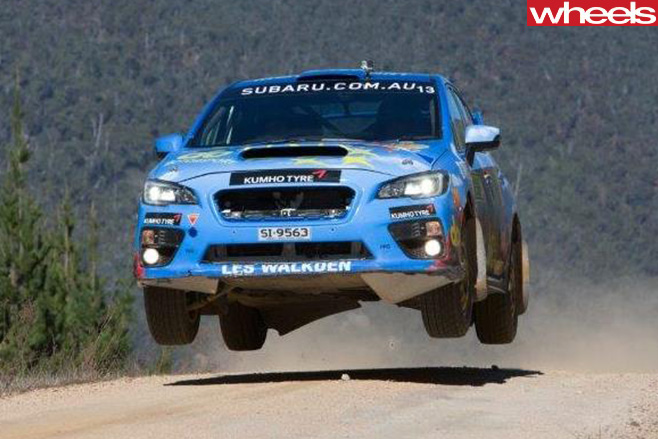 The rally was Reeves and Gelsomino’s first on home soil since November 2014 and was Reeves’ first competitive drive since October.

“It’s a fantastic feeling to win at Canberra again,” said Reeves, who won the event in 2014.

No-one could match the consistency of Reeves across the two days.  Nathan Quinn (Lancer) backed up a third on Saturday with a second in heat two to be classified second overall for the weekend. And Evans charged back in Sunday’s afternoon stages to claim third for the weekend, just ahead of Molly Taylor (pictured above) in the Group N Production Subaru WRX STI.

Evans continues to top the points standings from Harry Bates (Toyota) and Taylor.