DJR-Team Penske young gun Scotty McLaughlin is someone who clearly gets great joy from racing cars. But no weekend has brought quite as much pure delight as the one just past, the Supercars Championship contender landing two spectacular wins in the Perth SuperSprint at Barbagallo Raceway.

McLaughlin’s always evident talent has rarely shone brighter as he converted two front-row starts –including a pole on Sunday – into an unbeatable weekend in the Western Australian sunshine. 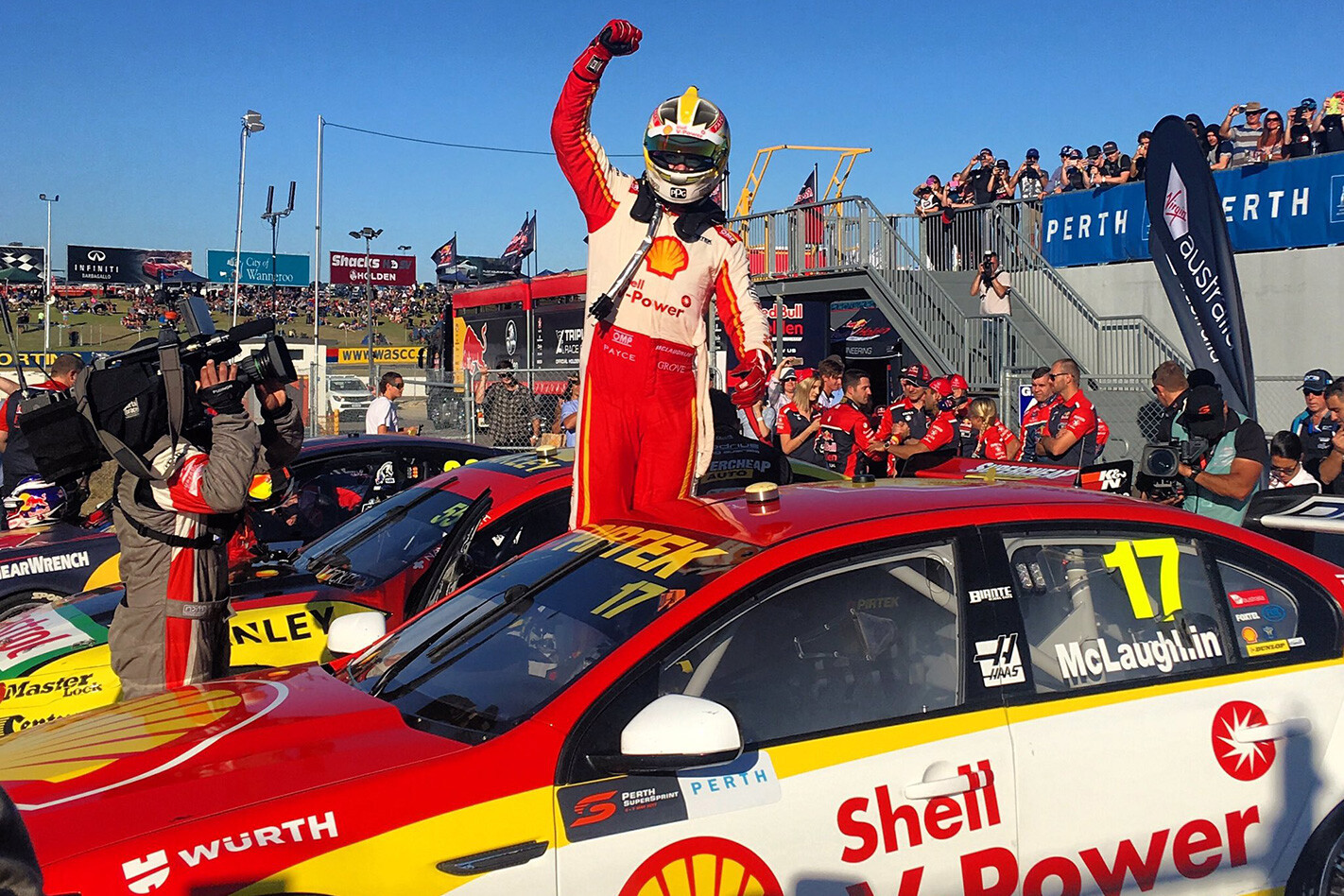 To score these results in front of The Captain – visiting team owner Roger Penske – only piled on the pleasure.

The abrasive nature of the Perth track’s asphalt and the mandated use of Dunlop super soft compound rubber was expected to produce unpredictable results with alarming tyre degradation and the anticipation of bold strategies from some teams.

But this year the boffins were on top of their game. Daring pit strategies were uncommon, and the races unfolded into contests between the big hitters of the series. The Perth round confirmed that the DJR-Team Penske squad is the outfit to catch, with both its Shell Falcons setting the pace. McLaughlin’s teammate, Fabian Coulthard, posted a pole, a second and a seventh in the west to keep his lead in the championship. On Sunday, Coulthard never recovered from an ordinary opening stint on tired rubber.

Prodrive’s Chaz Mostert, who won the previous round at Phillip Island, finished second on Sunday after a sixth place on Saturday.

Jamie Whincup, surprisingly win-less in 2017, conjured up a pair of third places and an optimistic comment. “We would love to have a win, so would the other 25 drivers in the category. But we will get there; it's not too far away. We will keep chipping away as we always do - it's that extra one per cent that's needed.

“Two podiums here is a great result for us. Everyone is being all 'doom and gloom' over the competition we are facing, but it's awesome for the category,” Whincup added. 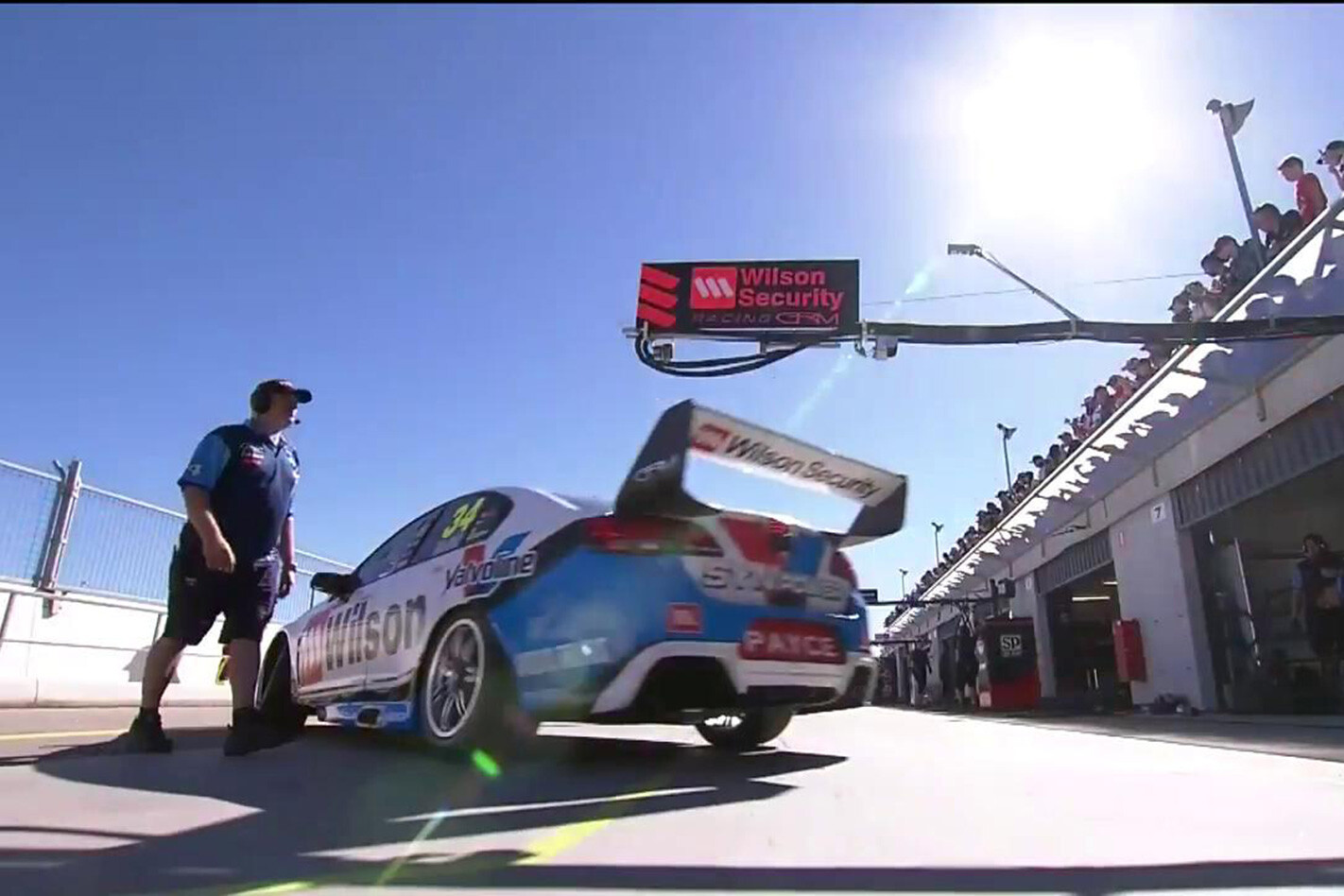 The fact remains that Ford drivers are on a roll with five consecutive wins for a Falcon driver, after Shane van Gisbergen won the opening three races of the season in a Red Bull Holden Racing Team Commodore.

Defending champ van Gisbergen managed a fourth and a sixth in Perth, enough to maintain second in the points. Just.

“It was a pretty straightforward race; we just went about the strategy,” said the matter-of-fact Kiwi, who near the end of the race commented over the radio that he was bored. “The car felt okay, but we are still lacking pace. We just aren't fast enough, and from my point of view, it was a pretty uneventful race. I didn't pass anyone until my last lap. I just kept driving around. The car feels good, but we just need to make it faster.” 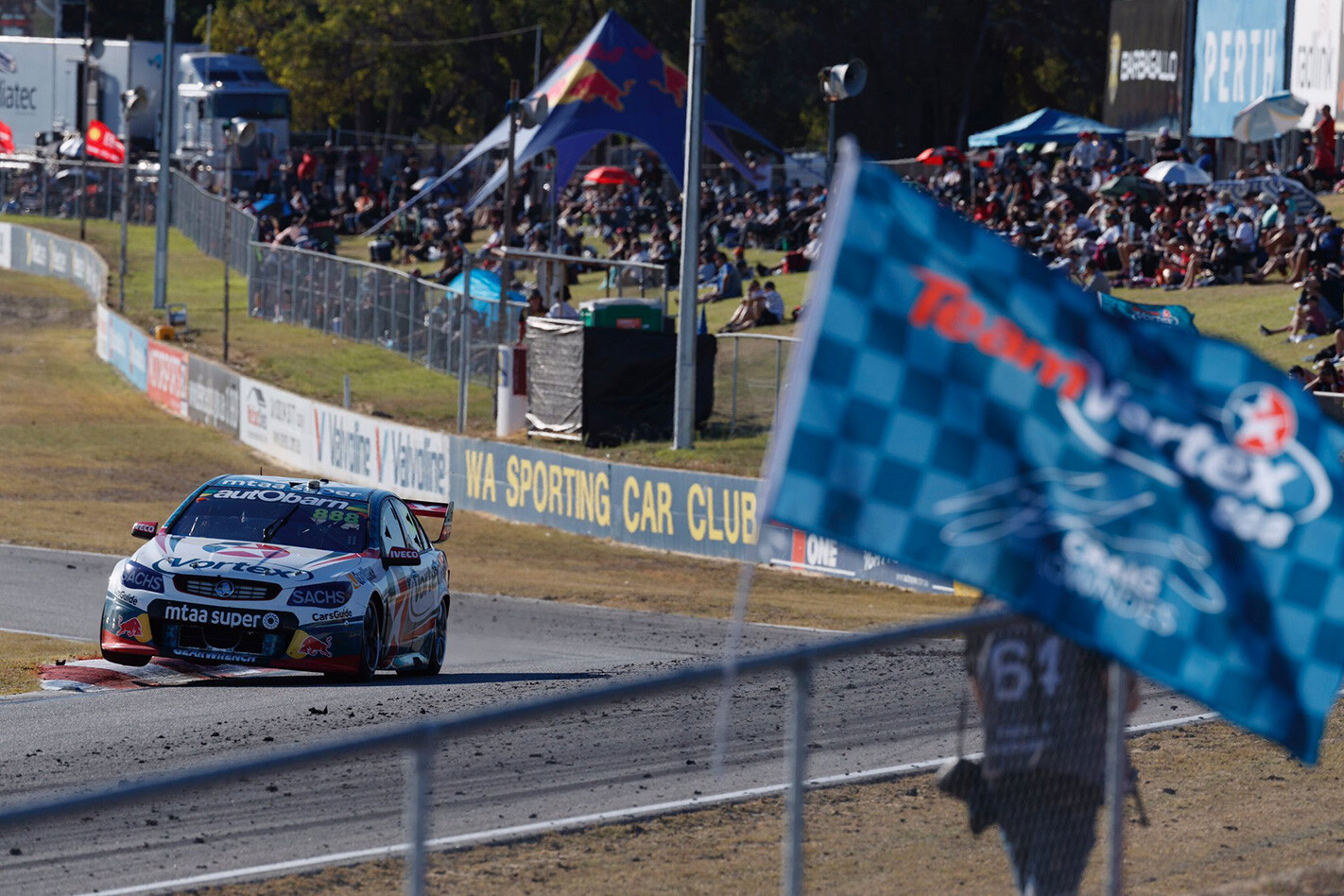 Barbagallo track maestro Craig Lowndes’ Sunday looked in tatters when his Commodore stopped with an electrical gremlin on the formation lap. He got it going but elected to start from the back of the grid. Despite being tapped into a spin at the pit entry by Alex Rullo, Lowndes forced his way to eighth (adding this to his seventh the previous day).

But the man with the immovable grin was McLaughlin. “My aim was to get some points off the guys in the top four places and we managed to do that,” said the Ford driver.

“I was pretty disappointed after [the previous round at] Phillip Island that we didn’t get at least one race win there. I felt like we had a strong car there.”

Next race in the series is the Winton SuperSprint from 19-21 May.

Dani Pedrosa showed he can still be a major force in MotoGP with a faultless ride to victory at the Gran Premio Red Bull de España at Jerez, leading a local riders’ podium lockout. Pedrosa was a class above everyone on his home territory. From pole position, he led the race from the first corner to the chequered flag, setting the race’s fastest lap on the way to taking his 30th win in MotoGP.

Fernando Alonso to the Indy 500 – how it happened

It was no Sunday afternoon cruise, with teammate and reigning world champion Marc Marquez never far away as the Honda pair – and many others in the field - dealt with fading tyre performance. A number fell during the race including Cal Crutchlow and Andrea Iannone. Marquez fought hard until the close before backing off to finish six seconds behind his fellow Honda rider.

Jorge Lorenzo had his best grand prix this season since moving to Ducati, coming home third some 14 secs back from the winner. It was his first podium of the year, the former world champ moved to say “this feels like a victory”.

MotoGP rookie Johann Zarco (Tech 3 Yamaha) was outstanding, aggressively carving past some big names to take an impressive fourth ahead of the factory Ducati of Andrea Dovizioso and Maverick Vinales (Yamaha). 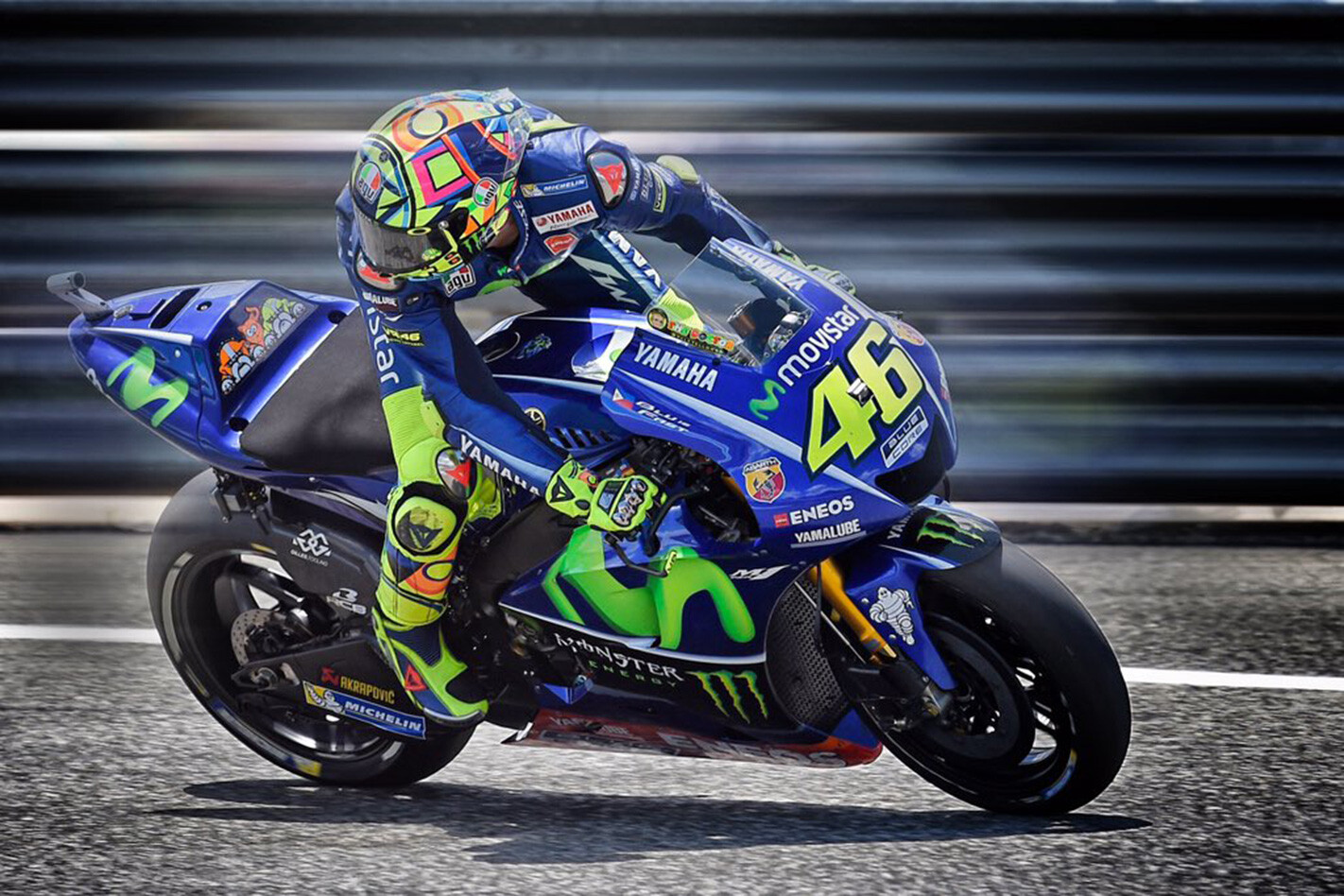 Valentino Rossi had a forgettable day, bringing his Yamaha to the line in 10th, but even so he retains a slender lead in the championship standings.

Aussie Jack Miller was taken out of 10th place after five laps, ruining what has been a solid start to his 2017 season. He was later fined 1000 euros ($A1480) after shoving Alvaro Bautista, the rider who took him out of the race, in the back. He also kicked the Spaniard's bike.

"He (Bautista) came in hot... I was already halfway into the corner and then he lost the front and just cleaned me out," Miller told motorsport.com. "And then I pushed him. It’s not the right thing to do."

The race was the 3000th GP of the world championship dating back to 1949 but also memorable as the Repsol Honda Team’s 100th victory in the MotoGP class.

A further milestone; Pedrosa is now the only rider to have won at least one race for 16 consecutive years.

Toyota has claimed its first one-two World Endurance Championship finish since Shanghai in 2014 in the Six Hours of Spa.

In tricky, light rainy conditions, Sébastien Buemi held off the fast-finishing Kamui Kobayashi in the final stages, hanging on to take victory by just 1.9 secs in a tense finish at the Spa-Francorchamps circuit. 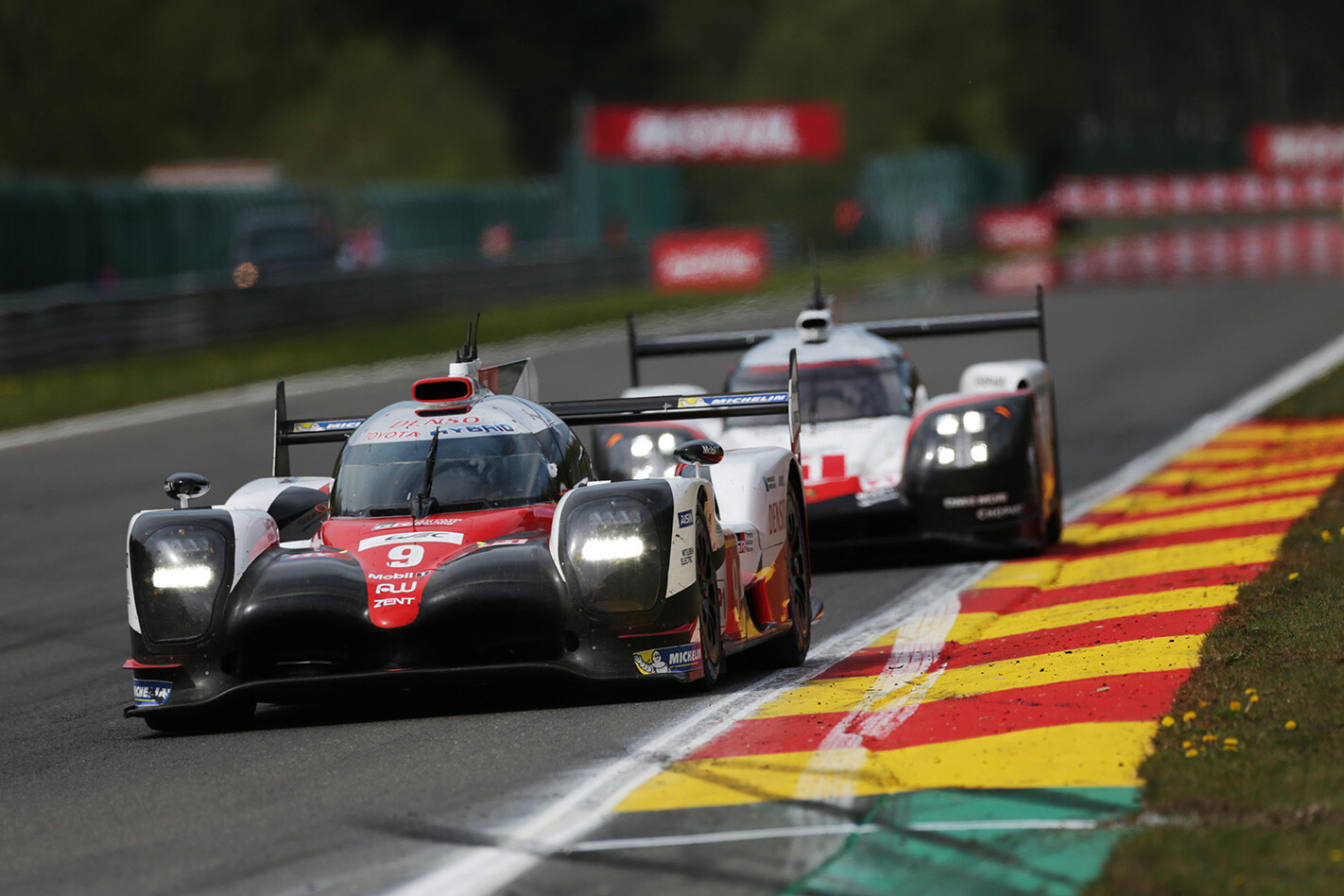 It was the second consecutive victory for the #8 Toyota Gazoo Racing TS050 Hybrid of Buemi and teammates Anthony Davidson and Kazuki Nakajima. They also won the opening WEC race of the year at Silverstone and now hold a handy lead in the drivers’ standings.

Mike Conway and Kamui Kobayashi, forced to drive as a duo after colleague José María López was ruled out through back injury, looked set to take the win but were unfortunate to lose out in both of the full-course yellow periods. 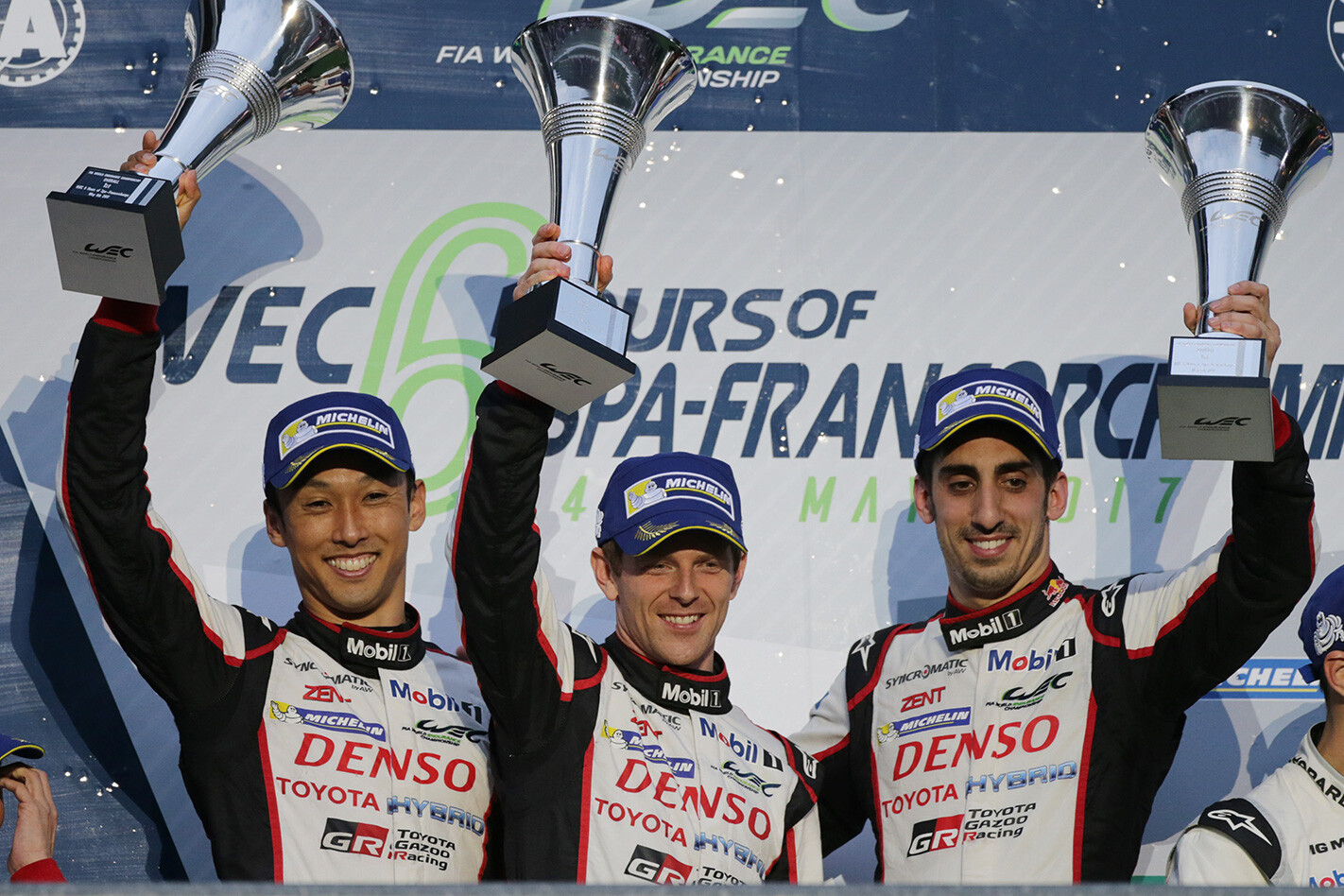 The Porsche LMP Team took third place with the #2 Porsche 919 Hybrid trio of Brendon Hartley, Earl Bamber and Timo Bernhard, while the sister crew of Neel Jani, André Lotterer and Nick Tandy in the #1 hybrid took fourth after starting from pole.

Toyota also took the chance at Spa to enter a third car fitted with a low-downforce configuration optimised for the long straights that characterise the Circuit de la Sarthe at Le Mans.

Stéphane Sarrazin, Nicolas Lapierre and WEC debutant Yuji Kunimoto brought home the #9 car in fifth place and provided the team with good data for the 24 Hours of Le Mans in mid June.