Fisi to Ferrari for remainder of season 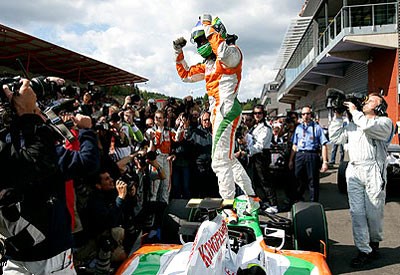 Massa sidelined for rest of 2009

The Force India Formula One Team has agreed to release Giancarlo Fisichella from his contract to join the Ferrari team for the remainder of the 2009 season, effective immediately.


He'll race as team-mate to Kimi Raikkonen in the remaining rounds of this year's world championship before becoming Ferrari's official reserve driver in 2010.

Fisichella's role at Ferrari was confirmed at Maranello on Thursday, 14 years after the Italian veteran tested a 412 T2 at Fiorano.

Fisichella, responsible for a surprise and impressive pole and second place in the Belgian GP at Spa last weekend, replaces test driver Luca Badoer, who has proved less than brilliant as a sub for the injured Felipe Massa.

"For any Italian driver, a Ferrari race seat is a long-held dream and for Giancarlo it was no exception," Dr Vijay Mallya, Force India's chairman and team principal, commented. "No one should stand in the way of this. Furthermore the agreement will secure Giancarlo's long-term future with Ferrari and it would be incorrect to jeopardise this, particularly when Giancarlo has made such a vital contribution to Force India."

Though it is widely believed in F1 that Force India still owes Ferrari a large sum for its engine supply last year, Mallya emphasised that he has not agreed any financial settlement with Ferrari.

"This agreement has been made in good faith and for the good of Giancarlo and the sport in general. A competitive Italian driver in a Ferrari for Monza is a positive story for Formula One, which can only help raise the sport's profile in these difficult times."

For his part, Fisichella said all the right things as he moves closer to satisfying a boyhood dream. "I am very grateful to Vijay Mallya for allowing me this opportunity to drive for the Scuderia Ferrari Marlboro team. It is true that it has always been an ambition to do this, and for Vijay to have allowed it to become a reality is very generous."