FINN Jari-Matti Latvala has overcome appalling conditions on Corsica to win the flood-ravaged Rally France, which returned to the island this year after a long break. 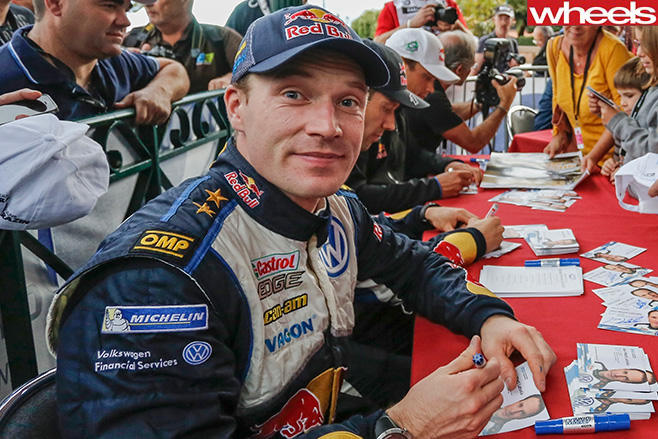 Welshman Evans hung on to claim a career-best second in his Ford Fiesta from Andreas Mikkelsen in another Volkswagen, with a margin of just 3.2 seconds.

For once Sebastien Ogier didn’t figure.

The opening day of the Tour de Corse brought dreadful conditions, and surprise after surprise. Shock leader Evans defied the unpredictable stages as he embarked on the rally of 10,000 corners with no prior experience.

Torrential rain and muddy roads turned the claustrophobic and snaky rally roads of Corsica into a game of rolling the dice.  Judging just how hard to go was difficult.

Just two of Friday’s three scheduled stages were held, with treacherous roads forcing the cancellation of the other.

On Friday night, four brands held down the first four places, with Hyundai’s Kevin Abbring heading his illustrious team-mates in second, Latvala in third, and Mads Ostberg fourth in his Citroen. 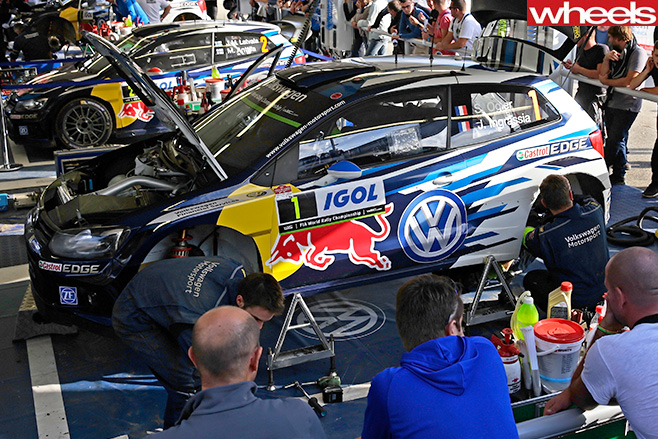 Triple world champ Ogier slipped to 10th with a slow puncture, and then received a 10-minute penalty for changing the gearbox after the scheduled service on Friday evening.

On Saturday, the surviving VW crews mounted an impressive fightback, Latvala plucking the lead from the overly cautious Evans, and Andreas Mikkelsen grabbing third on a course again shortened due to the weather.

With Latvala leading Evans by a mere two seconds, the scene was set for a tense final day. But the Finn pulled away in the day’s three speed tests, and Mikkelsen’s late challenge fell short.

“We’ve not had to push to the maximum at any point, but it was a faultless drive in difficult conditions,” Latvala said. “After winning last year, I have now done it again in Corsica and it’s important for me to show I can be competitive on all surfaces.”

But Ecclestone says he’s comfortable with the complaint.

It’s an ongoing saga. Minnow teams have long been frustrated that Ferrari, Mercedes, McLaren, Red Bull and Williams are favoured financially by additional handouts amounting to tens of millions of dollars.  The favoured five get 65 per cent of the total prize pot of $US 835 million.

The two midfield teams have cranked up their claims for economic equality with the pitch to the EU, with hopes that an investigation will overturn the lopsided distribution of revenues.

"We haven't discouraged or encouraged anybody to do anything," Ecclestone told Autosport.

"That's what the European Union is there for… for these sorts of things.

"They [the teams] must give it a go, and if they're successful it's good, and if not then it costs nothing."

Ecclestone reminded Autosport that in 2012 all the teams signed “clear contracts” effectively agreeing with the specified distribution of revenues, with five teams getting premium payments.

The contracts referred to by Ecclestone are those signed by the teams, in which it apparently makes clear the five major teams would receive premium payments, which were agreed upon by way of bilateral agreements signed in 2012. 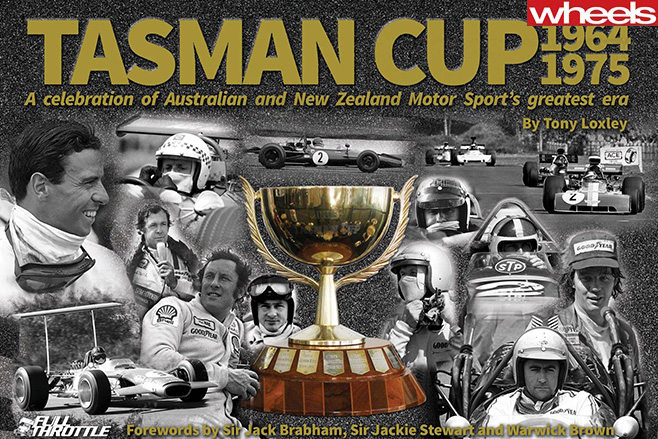 WARWICK Brown, the brash bloodnut of 1970s Aussie open-cockpit racing, turned unusually emotional when he picked up and began flicking through a new coffee table book.

The only Australian to have won a Tasman Cup series, Brown was holding three kilograms of precious memories from what many believe was the best – and the most dangerous -  open-wheel racing Down Under, certainly until the arrival here of Formula One grands prix.

The weighty tome faithfully records, in words and pictures, the entertaining and dangerous period of the single-seater Tasman Cup, which ignited Australasian motor sport from 1964 to 1975.

Forty years on, the book, Brown sensed, would allow his grandchildren and those after them to appreciate and understand what he and his mates did on tracks across Australasia against visiting Formula One drivers including world champions Jim Clark, Graham Hill, Jackie Stewart and Jack Brabham.

“The younger members of my family know I raced cars back in the day, but Tony Loxley’s book tells the story in a way I’ve never seen before,” said  Brown, alluding to a  time of brutal if fragile coffins on wheels,  rudimentary wings, and H-pattern Hewlands. 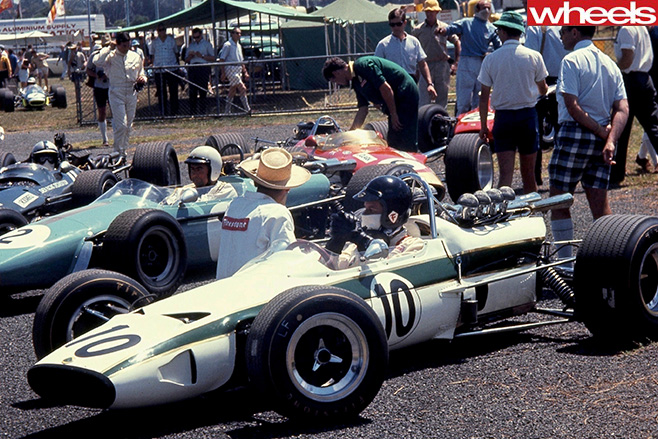 Subtitled “A celebration of Australian and New Zealand Motor Sport’s Greatest Era”,  the 500-page book puts the reader slam-bang into the scary but real atmosphere of a race series that stands as one of the most memorable in the history of the sport in this part of the world.

It started with 2.5-litre formula cars and then in 1970 swung for cost reasons to the rawer, simpler and angrier Formula 5000 beasts.

“They were papier mache compared to today’s cars but they had so much grunt to fire you out of the corners,” said Brown, a contemporary of Kevin Bartlett, Spencer Martin, Max Stewart and Frank Matich.

“The cars were as dangerous and intimidating as a shark in shallow water,” wrote kiwi journalist Allan Dick.

The always-eloquent international journalist Peter Windsor, an admirer of Matich’s locally brewed talent, never limited his praise to the racer/constructor:  “I was a Niel Allen fan too – though he was so much more on the edge that I found him frightening to watch…” 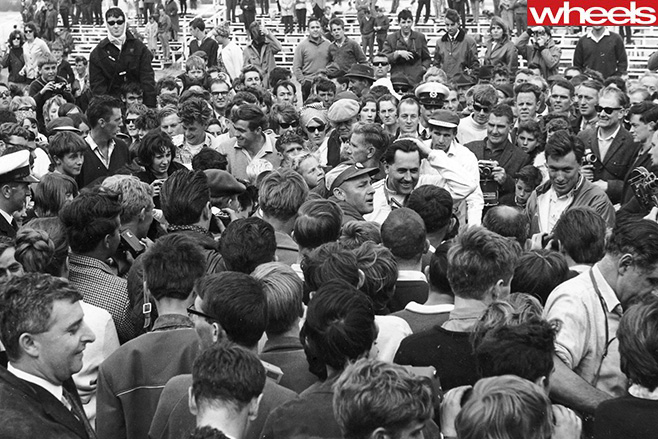 Loxley trawled the world for some wonderful photos – 900 in all, and many unpublished until now.

Loaded with first-hand stories from drivers, mechanics and journalists of the day, the book is a thorough – sometimes sad, often joyous - reflection of a time when Australian and New Zealand single-seater racers measured themselves against the world’s finest grand prix stars.

“We would learn so much every Tasman Series,” recounted Bartlett. 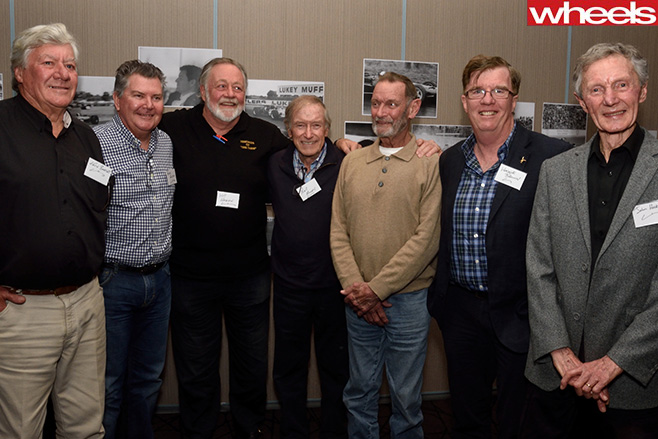 Author/compiler Loxley says his motivation for the book, and others he has done, is to ensure the brave competitors are remembered by future generations.

Orders can be made by calling 1300 582882 or online at http://www.fullthrottlepublishing.com.au 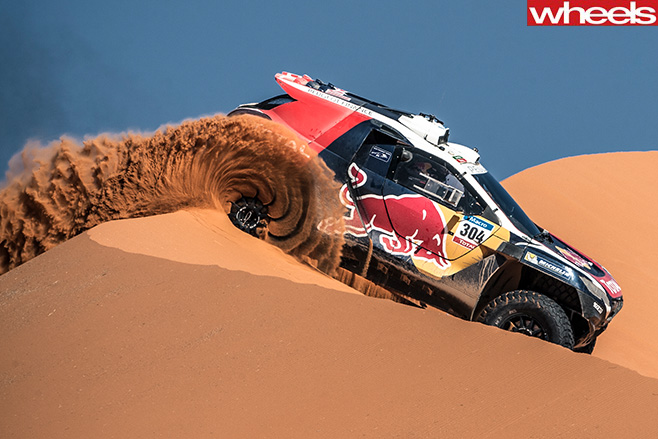 SÉBASTIEN Loeb, the greatest rally driver of all time, has joined Peugeot’s dream team for his first crack at the legendary Dakar Rally next year.

The nine-time world rally champ and Pikes Peak record-holder has joined Peugeot’s 2008DKR line-up alongside another former WRC champ, Carlos Sainz, for one of the toughest challenges in motor sport over 13 days in Argentina and Bolivia in 2016.  Previous winners Stéphane Peterhansel and Cyril Despres will complete the four driver squad.

“The Dakar is completely different from the racing I’m doing at the moment,” said Loeb.  “It will be very long, over two weeks, and you need to have the endurance to look after the driver and the car. It’s another approach to racing but I’ll discover that in January.” 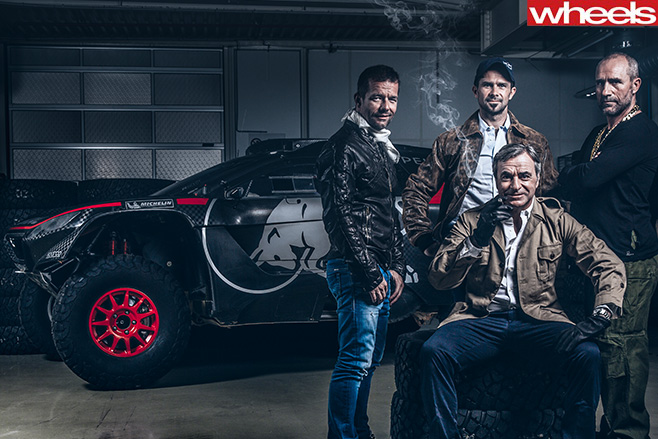 Loeb, who is competing in the FIA WTCC with Citroen, has tested his new machine.

“What struck me most of all is how the Dakar car was a completely new experience: in the WRC I have been used to going round obstacles but with this car you can just drive straight over them, and it takes some time to have the confidence to believe it!

“I’ve also been used to having very detailed pace notes: in Cross Country, you have to find the road for yourself and improvise your route. And this is actually the first time I have driven any type of diesel car in competition too. So there is a lot for me to learn, but I am eager to find out more.”