Loyal as he is to Garry Rogers, young kiwi needed to secure his future

It’s no great surprise that Scott McLaughlin is departing Garry Rogers’ Volvo operation to join Fabian Coulthard at DJR Team Penske in 2017 and beyond.

DJR Team Penske has had McLaughlin on its radar for more than a year, but the Volvo star needed a damned good reason to leave GRM, a happy and successful team.

Back in April when confirmation arrived that Volvo was departing the Supercars series from the end of this season, McLaughlin, one of the more prodigious young talents in the country, was morally and emotionally free to look elsewhere for job security. His contract was nearing its end, and Rogers’ plans for next season are just not firm enough to be reassuring to an ambitious, hot property. McLaughlin would be the first to acknowledge that Rogers gave him great opportunities, particularly a competitive car in which to win races and confirm his talent.

The 23-year old is currently in third place in the 2016 title chase and in three-and-a-half seasons in the main game has landed eight race wins, and 17 poles.

And then there was the lure of joining DJR Team Penske.

“You’ve got to understand that Roger Penske is hell-bent on being number one in Supercars and nothing will stop him,” team founder Dick Johnson told Wheels. “Make no mistake, Penske will get there [to the top]. He has every other time.” 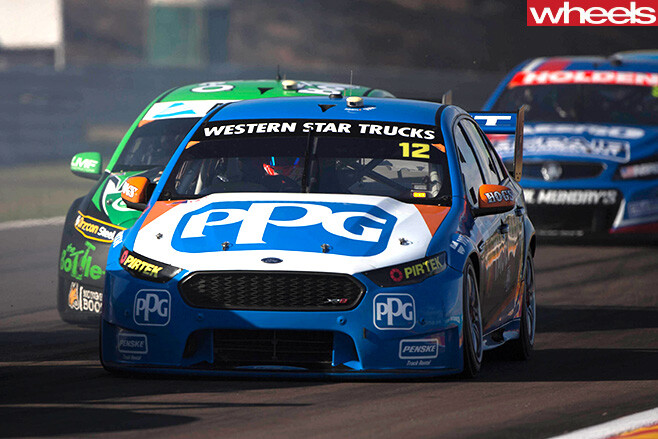 McLaughlin knows this. And he is also aware of the possibilities to race in America, where Penske is competitive in other motor sporting arenas. For the foreseeable future, though, the priority is to chase a championship here.

One Scott’s imminent arrival means another Scott – Pye – is out of work and looking at other opportunities in Supercars.

Pye has certainly done enough after stepping in to replace Marcos Ambrose after the former NASCAR star’s shock decision to call time on his career last season. “Scott Pye always understood he was an interim driver,” Johnson said.

“He got a chance to race with us when Marcos pulled the pin very unexpectedly. One thing I can say about Penske too is that they’ll never buy out a contract. Contracts are honoured always.

“With the combination of McLaughlin and Coulthard we’ll be chasing race wins next season.”

McLaughlin is something of a one-lap pole specialist, but also races impressively and has posted seven top-five results across the first 13 races aces this season, including a pair of victories from pole position at the Phillip Island SuperSprint.

He has certainly hooked up with a powerhouse for 2017. Competing in a variety of disciplines, including NASCAR and INDYCAR, Team Penske has produced more than 430 major race wins, over 490 pole positions, 28 national championships and 16 Indianapolis 500 victories during its storied 50-year history. Erebus Motorsport is close to completing the upheaval of moving from Queensland to a new headquarters in the Dandenong area, hopeful that when the boxes are unpacked and the new base is running smoothly that stronger results will flow more regularly.

The V8 Holden team initially moved to its GT workshops at the start of the season but it was a temporary home.

Erebus has been working hard this year, helping new drivers David Reynolds and Aaren Russell settle in while toiling to improve the performance of Reynolds’ Walkinshaw customer Holden.

It is to the credit of Erebus and Reynolds that their Holden has been on the pace of the HRT cars.

“The transition has been a massive undertaking and I am extremely appreciative of everyone’s patience and understanding,” said owner Betty Klimenko. “Our sponsors and staff have been very supportive and David Reynolds has been fantastic through all of this.”

Klimenko has also taken time to explain that while, on the surface, Erebus is a two-car team, she doesn’t own one of the Commodore Supercars.

“We agreed to work with Novocastrian Motorsport ahead of this year to give Aaren Russell the chance to compete – it’s something we haven’t done before in Supercars”.

“Aaren and his father Wayne brought their own car and major sponsor, and Erebus Motorsport have been managing and maintaining it.”

“Wayne Russell wanted his son to compete in Supercars and together we worked on a program that gives Aaren the chance to work with Erebus Motorsport’s experienced crew. The team has also made David available to help Aaren where he can”.

Erebus is also building a new car for Reynolds ahead of 2017 but it’s all rather crazy with this project also coming as the team is set to make a move to the new headquarters.