Lewis Hamilton may have claimed the win in the Formula One decider, but his tactics come under fire

NICO Rosberg clinched his first Formula One world drivers’ championship with a second place in a tense finale in the Abu Dhabi Grand Prix, surviving the questionable tactics of his Mercedes teammate and race winner, defending titleholder Lewis Hamilton.

With Lewis Hamilton controlling the race out front, Rosberg needed to finish on the podium if he were to be champion.

Hamilton disobeyed radioed team orders to lower his lap times after the Briton pointedly slowed the pace to try to back Rosberg into the fast closing Ferrari of Sebastian Vettel and the Red Bull of Max Verstappen.

Repeatedly told to speed up, Hamilton responded with a plaintive: "Let us race."

But as the leading four leading cars compacted in the final two laps and with Vettel looming in his mirrors, Rosberg held on to take the crown, 34 years after his father Keke won the world championship. 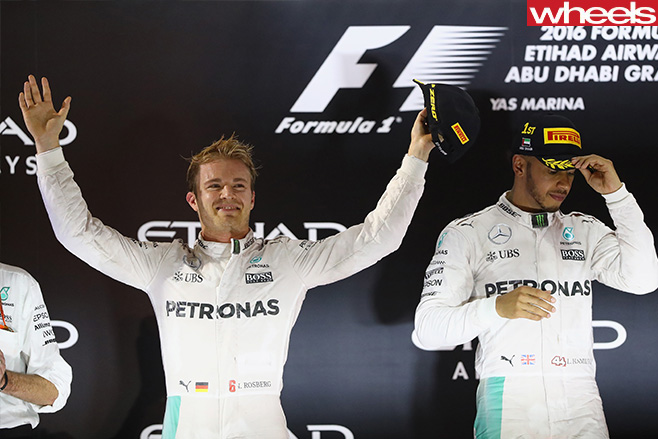 "We were fighting for the championship, I was in the lead so I control the pace...that is the rules.

"There was never a moment where I felt I would lose the race,” Hamilton said.

But yet again Hamilton has shown that he is only a team player when it suits him.

"It was a tricky situation at the end with Lewis playing dirty tricks," third-placed Vettel said to his team as they congratulated him on the radio. 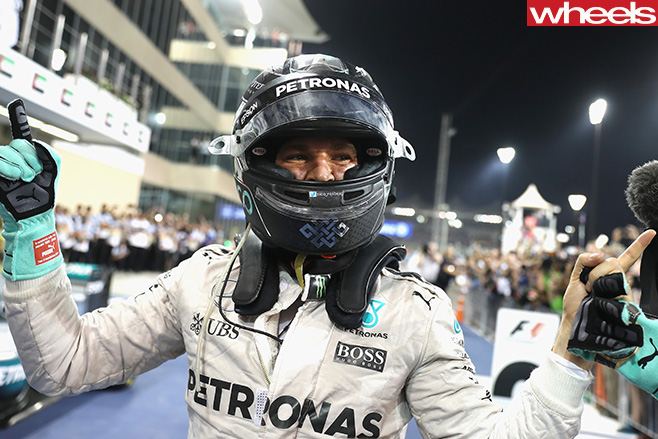 "It was tough out there. I didn't want to be an issue. But at the end I was thinking maybe to try to pass both of them but it didn't work out."

Whether sportsmanship should be a factor in one of the most selfish team sports on the planet will be hotly debated over the coming days.

"Anarchy doesn't work in any team or any company,” Mercedes team principal Toto Wolff said when asked about Hamilton’s defiance of the team’s instructions.

The other side of of the Mercedes garage was ecstatic, though.

"It's a childhood dream come true," Nico Rosberg, 31, told his team over the radio. "Thank you for everything." 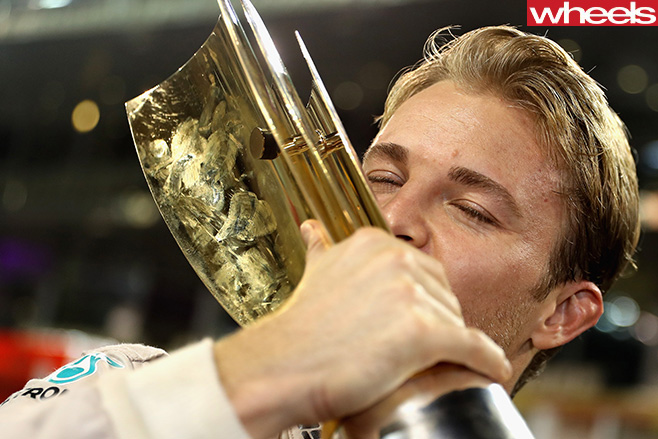 There was joy and relief from Rosberg, who usually keeps his emotions well hidden, when he leapt from his car.

"I'm very, very glad that it's over," said the multi-lingual, Monte Carlo-raised German, who went into the Abu Dhabi race knowing the title was his to lose.

Later, Rosberg said he is yet to decide whether to run the #1 on his car next year, or stay with #6, the race number his father used to win the title.

The only other father and son to win the title are Graham and Damon Hill.

In a gruelling 21-race world championship, Rosberg won nine races this year; Hamilton 10.  The other winners were the Red Bull drivers Max Verstappen and Daniel Ricciardo. 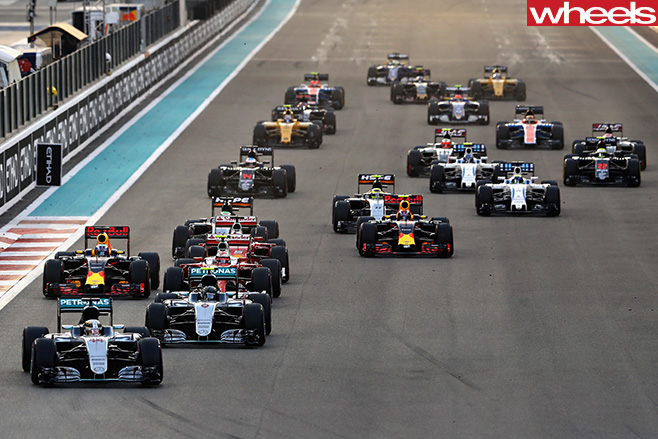 There will be many F1 followers, and more than a few in the media, who insist Hamilton is a better driver than the man who just kept him from winning a fourth championship.   Others, including Hamilton himself, point to mechanical issues this year that robbed him of valuable points.

If he analysed further, Hamilton might also agree that some messed-up starts (before he did his homework and lifted his game off the line) also potentially cost him dearly.

Hamilton certainly has blinding speed, but also makes more mistakes than Rosberg, who this season mastered the art of consistency, doing just enough in the tight business end of the championship to win the title by five points. 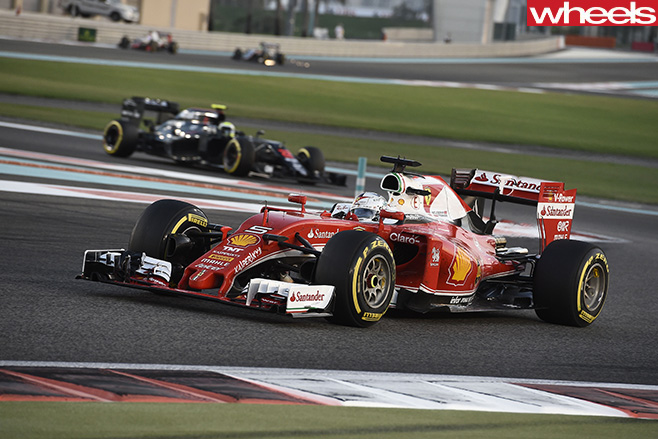 Rosberg also showed he can overtake spectacularly when the situation demands.  Told by the team on lap 19, that that getting by Verstappen immediately was "critical", he did so with a daring passing move to take the second place he held to the chequer.

Ricciardo, who was fifth in Abu Dhabi, had locked up third in the championship before the weekend.

The grand prix was also the last for Felipe Massa, whose Williams finished ninth and in the points, and likely the last for Jenson Button, an early retiree with broken suspension.

On Saturday, Hamilton claimed pole position for the championship showdown with an authoritative performance in qualifying, more than 0.3sec faster than Rosberg. 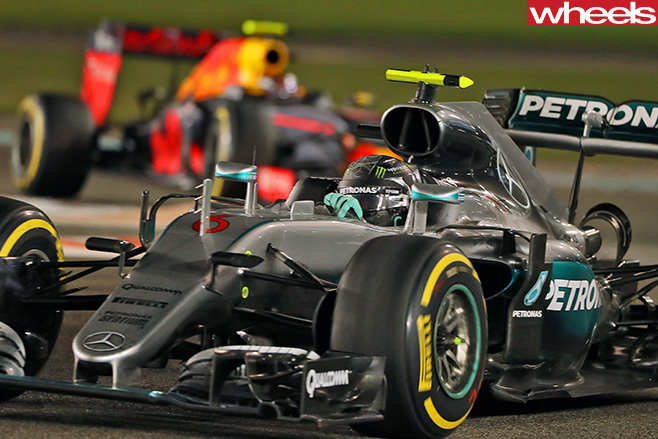 Ricciardo, and Verstappen, who qualified sixth fastest, both started the race on the super-soft tyre while their Mercedes and Ferrari rivals all favoured ultra-softs.

Sebastian Vettel was fifth fastest in the second Ferrari, less than a tenth slower than Raikkonen.

Explaining the reason for the different strategy, Ricciardo said: "We have got to try something.”

That strategy didn’t quite work.

“I’m just frustrated in how the strategy played out in the end,” Ricciardo mused on Sunday night. “We had the supersofts at the start and it was still going pretty well and we tried to make a move on Kimi. For sure it was close but we didn’t pull it off and that really hurt me.

“I think we should have just gone long and one-stopped but in hindsight it’s always easy to say. I saw Max spin in mirrors in turn one, so I thought he was out of the race and then he does a one-stop and fights for the podium so he did well.

“I just feel we hurt with the two-stop strategy as the supersoft was a good tyre,” the Aussie added.

“Hats off to Nico. It must be an amazing feeling to be world champion. They both pushed each other until the end and it’s nice to see the title go down to the line like that.”