Though he extended his championship lead over Sebastian Vettel to 34 points, Hamilton and Mercedes left Sepang with lots to worry about.  The Silver Arrows didn’t have the sheer speed of Ferrari and Red Bull in Malaysia, and there are more fast tracks coming up, starting with Japan next weekend. 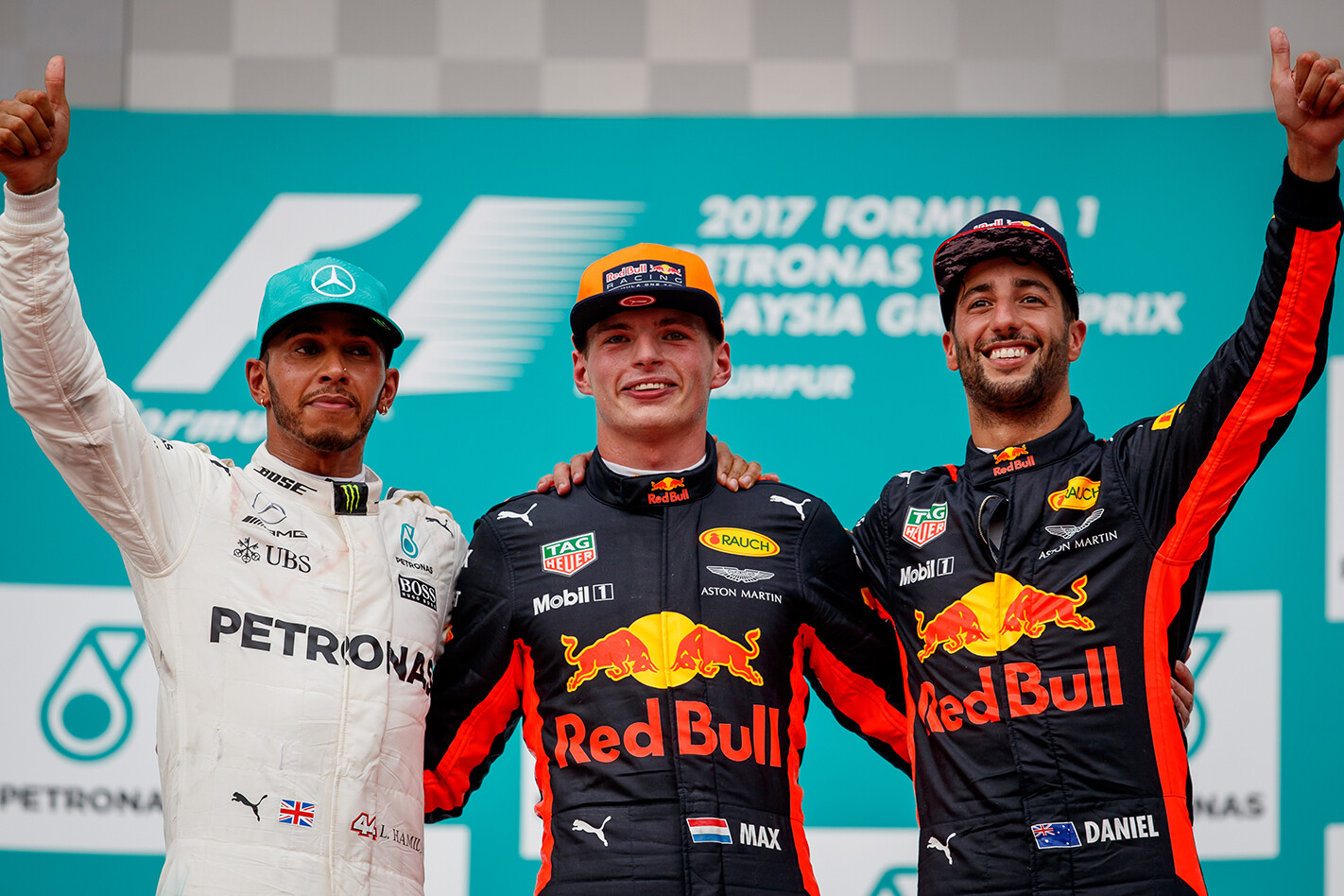 Hamilton didn’t have an answer for Verstappen’s relentless race pace.

Often a first-lap magnet or a catalyst for trouble this year, the fiery young Dutchman followed pole winner Hamilton into the tricky turn one ahead of the fast-starting Valtteri Bottas (Mercedes) and teammmate Ricciardo.

Then on lap four, Verstappen used his battery power to whip past Hamilton, who with the championship stake was never going to defend too forcibly.

After that, Verstappen, who celebrated his 20th birthday the previous day, had the race at his mercy and won in a canter. “Straight away I could see our pace was good and that Lewis was struggling with traction," he said. "As soon as I passed Lewis I knew from there onwards I could control the race. The car was really good and our pace on the soft tyre was better than I expected.” Verstappen’s only complaint came in the drivers’ recovery room post race. “Do we have some sugary drinks here?” he asked, clearly not satisfied with water…or Red Bull.

Missing from the race was Kimi Raikkonen, whose Ferrari encountered a last-minute mechanical issue and was wheeled away from the outside of the front row of the grid in what was another embarrassing grand prix for the red cars. The Finn’s DNS (did not start) came on top of Sebastian Vettel missing qualifying with a power loss, forcing him to start at the back of the 20-car grid.

When the lights went out, Vettel embarked on an impressive recovery mission, overtaking car after car to climb up to fourth behind Ricciardo.  The German appeared to have the appetite and the car speed to make the podium but Ferrari wouldn’t give him permission for anything more than just a brief crack at third place. But Ricciardo got his elbows out as the Ferrari loomed large late in the race, defending vigorously heading into turn one.

There were no further attacks, prompting praise for Ricciardo over the team radio:  “You’ve broken Vettel’s spirit; he’s having to look after his tyres now. Good job, mate.”

More likely Ferrari opted to turn down Vettel’s engine to preserve it for future races.

Either way, Ricciardo held on to third.

“Seb came really quick at the end and I thought he was going to be a handful,” Ricciardo said after the race. “But he only had one strong attack and then we were able to pull away.

“If I’m honest I would have liked a bit more of a fight until the closing stages just to have made it a little more exciting as the last few laps were kind of lonely," he said. This double podium is a very positive result for us today. Obviously Max got the big one and drove well so congrats to him for the win; he drove strong all weekend. There were a few extra bits available for the cars here and I think we’re going to try that again [next weekend] in Suzuka; it looks positive for us at the high downforce circuits.”

Ricciardo looked and sounded upbeat, but the painful reality is that his teammate finished 22.7 seconds up the road. And two places ahead. Though Verstappen and Hamilton had cruisy drives to the flag, there was lots happening further back, with any number of dices and overtaking on a circuit with two long DRS overtaking zones.

There were lots of angry young men afterwards, but one smiling was Stoffel Vandoorne, who  finished seventh in his McLaren Honda, his best result in F1

There was another shock to come, when Vettel’s Ferrari and Lance Stroll’s Williams came together on the cool down lap, the impact tearing the left rear from the Ferrari. Vettel blamed Stroll but stewards later made the call that neither driver was “wholly or predominantly to blame” for the clash.

The last-ever Malaysian Formula One Grand Prix and its lead-up offered up some baffling scenarios from beginning to end. Mercedes arrived at Sepang believing, as most of us did, that the fast, wide and flowing layout would suit the Silver Arrows.  Instead, on Friday in wet FP1 conditions, the Red Bull Renaults were on top, followed by Ferrari. Yet, in the dry FP2, Ferrari held the ascendancy with the Bulls next.  Wet or dry, the Mercs were off the pace and lacking balance.

But come qualifying, the form went out the window, along with more of Vettel’s receding title hopes.  His Ferrari needed and engine change, and then there were more dramas when qualifying started. He was consigned to a grid start offering a full and uninterrupted view of 19 cars ahead.

From struggling through free practice, Hamilton and his engineers  found the key to going fast by Saturday afternoon.  The Briton claimed pole by the proverbial bee’s appendage, from Raikkonen’s red car, then Verstappen (the fastest Bull driver again) and Ricciardo.

Even Mercedes’ Toto Wolff struggled to explain the variable pace of his cars (and the main opposition) across Friday and Saturday. “We have seen a pretty confusing picture of performance, with different cars quick at different times and even big gaps between teammates," Wolff said. "Our struggle has been to get the tyres into the right working window, then things came together [in qualifying] as the track temperatures cooled. After a tough Friday, the team here at the track and back at base did a good, calm job to analyse the situation and come up with some improvements. And then, when it really counted, Lewis was able to put together a blistering lap to take pole - something we didn't expect at all going into qualifying.”

Making his F1 debut for Toro Rosso in place of the rejected and dejected Daniil Kvyat was GP2 (now F2) star Pierre Gasly in what the team says is an evaluation before it settles on its 2018 driver line-up.  While Toro Rosso insists Kvyat has not been booted, the Russian’s confidence would have plunged even lower when the newbie qualified a rather impressive 15th, one place and not much more than one-tenth slower than highly regarded Carlos Sainz Jr.

The lead-up was also disrupted by a safety shocker, a dislodged drain cover, which caused Romain Grosjean’s Haas to fire off into a barrier, sustaining serious damage.

As well as a memorable weekend for Verstappen, the team also had some big if not unexpected news to confirm, announcing Aston Martin as its naming partner for the coming three years, the closer relationship coming on the back of its Valkyrie hypercar project.