SIX-TIME Champion Jamie Whincup and the Red Bull Commodore team rediscovered the formula to success at the ITM 500 Auckland at Pukekohe Raceway at the weekend, bagging two wins from three races and claiming the Jason Richards Memorial Trophy.

“For me, it’s all about the JR Trophy,” an emotional Whincup said. “We were teammates. We were good mates…first podium, first Bathurst podium.

“I haven’t won much this year, but it’s a good year knowing the JR Trophy is in the cabinet.” 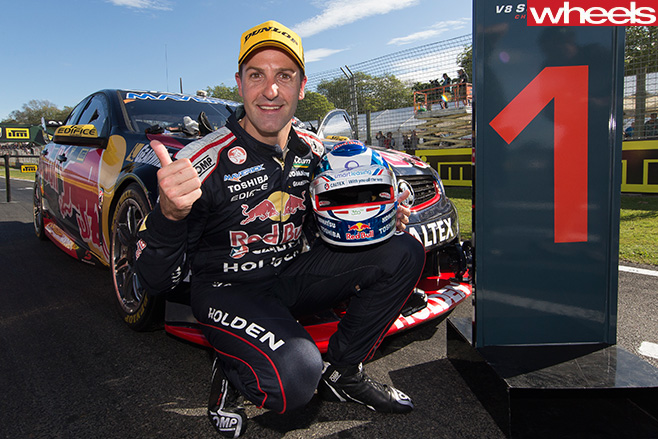 Man of the race was Garth Tander, who charged from 17th to 10th.  But HRT’s lack of consistency continues to hurt the drivers, especially in qualifying.

Later on Saturday in race two came the huge shunt that may be remembered as the moment Lowndes’ 2015 championship campaign went south.

Leading midway through, Lowndes’ left rear exploded at close to 250km/h, ripping apart some bodywork and pitching the Commodore hard into a wall.

The victory went to Prodrive Ford’s Reynolds after he emphatically repelled a bold move for the lead by renaissance man Whincup.

Whether Lowndes’ collected some debris, or damaged the tyre on kerbing was difficult to determine.  The team said later that the Dunlop had full pressure right to the moment it failed.

While Lowndes’ car was miraculously brought back to peak health overnight, V8 Supercars Australia consulted with the teams on possible reasons for the tyre failure and agreed on tyre camber and pressure recommendations for Sunday’s race.  It was also decided all cars would start on soft tyres (both soft and hard compounds would be used).

The 69 lapper began with fury and chaos.  Whincup blasted to the lead in front of McLaughlin with Reynolds in the picture again, along with Scott Pye in the DJR Team Penske Ford.  On lap three, the essential badness that is pack racing brought the championship leader into trouble, nudged into a spin by a HRT car. 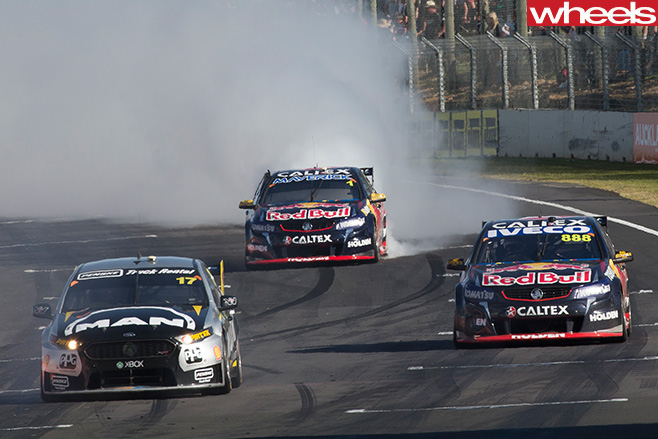 A safety car on lap eight brought the herd into the pits for tyres and varying amounts of fuel.  At the restart, the championship battle was this: Reynolds in second position behind J-Dub; Lowndes ninth; and Frosty up to 18th but mired in panel-bending Wallyworld.

When the field shook out after the second round of stops, the order was Whincup, Lowndes, Pye, and Reynolds, while Winterbottom popped out in 17th with much to do.  Frosty went hard on a recovery mission, scrambling up to 11th at the chequer.

"That was bad to be going backwards and facing the wrong way,” said Winterbottom. “We had pretty good pace and just pushed on when we got back facing the right way.

“We consolidated what could’ve been a disaster. The car was good; probably the best it’s been all weekend and we didn’t get to use it. It was a good result, and whether it’s Dave or Craig, we are maintaining the [championship points] gap.”

Revelling in genuine car speed, Whincup led home Lowndes in a splendid Red Bull one-two rebound.   “We had a great day,” Lowndes said. “It was well deserved for the boys after all their hard work last night.

“They pulled an all-nighter, to not only take the car apart, but get it fixed and put it back together, it’s a real credit to them. The car was great.”

A career-best third went to Pye and the improving DJR Team Penske operation. 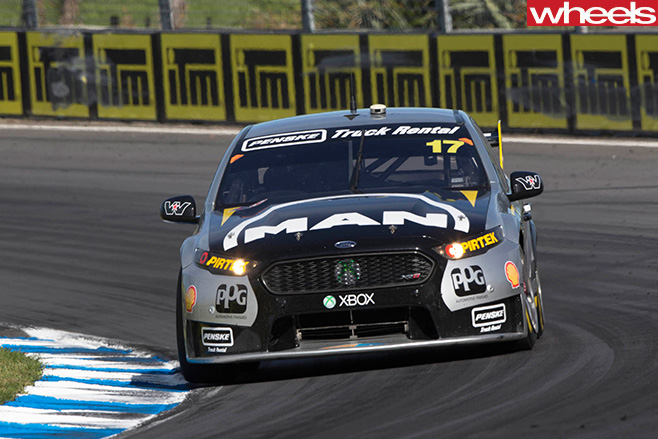 “The podium today is both a great result and a relief,” said Pye, whose podium joy was magnified   by having Roger Penske watching on. “We have had great car speed in recent rounds but we have struggled to convert that into a result.”

The steady Reynolds followed in fourth, holding off a persistent and speedy Michael Caruso in the Nissan.  Pole man McLaughlin was sixth.

Frosty’s margin over his pursuers is a still handy 239 points (down from 258 at the start of the weekend) with Reynolds, in second, one point ahead of Lowndes.  Bring on Phillip Island and Homebush. 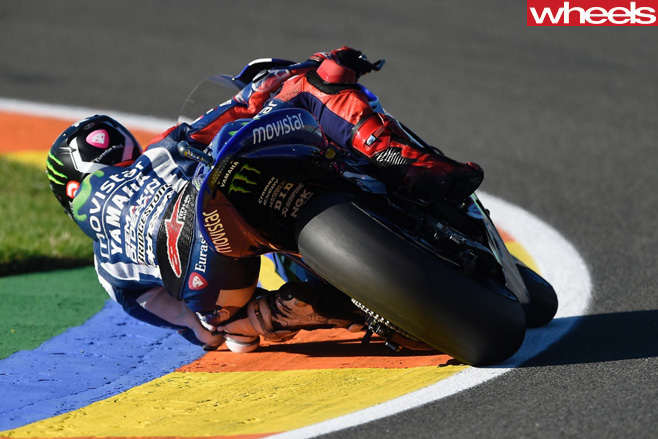 MOTOGP fans will continue to debate whether or not Valentino Rossi was the villain in the incident with Marc Marquez at the controversial Malaysia Grand Prix on October 25.

But officials certainly had a conclusive point of view, and the megastar’s bold title tilt in 2015 probably foundered when on November 4 he lost his appeal against the sanction handed down by the FIM stewards.

The penalty – which meant Rossi had to start the championship decider at Valencia from the rear of the grid – came for the Italian making contact with Marquez and forcing him to run wide while the two were battling for third at Sepang.

Marquez and his Repsol Honda team accused Rossi of kicking the Spaniard during the exchange. Rossi denied the claim and insisted Marquez was siding with countryman Jorge Lorenzo in the tight duel for the world championship.

The Court of Arbitration for Sport in Switzerland agreed with the officials and upheld the penalty against Rossi.

Lorenzo turned on blinding pace in Valencia qualifying, taking pole from Marquez and Dani Pedrosa while Rossi, ignominiously, fell off.

After that, Lorenzo looked a shoo-in to blow away Rossi’s seven-point advantage

The final race certainly didn’t live up to what, until Valencia, had been a wonderful season.

Lorenzo won the clincher to seal his third MotoGP world championship. Rossi was fourth. His hopes of taking a 10th career Moto/500cc crown relied on the two Repsol Hondas getting past Lorenzo. Defending  champion Marquez, and Pedrosa finished second and third. Rossi angrily accused them of assisting Lorenzo by not pushing him hard.

“I did what I could but it was a strange situation having Marquez as the bodyguard of Lorenzo. It is embarrassing for the sport,” Rossi said later.

“Hopefully the sport’s authorities will be able to sort it out. It is an ugly end to what has been an attractive championship. It has not been a true championship and this should not happen in sport.” 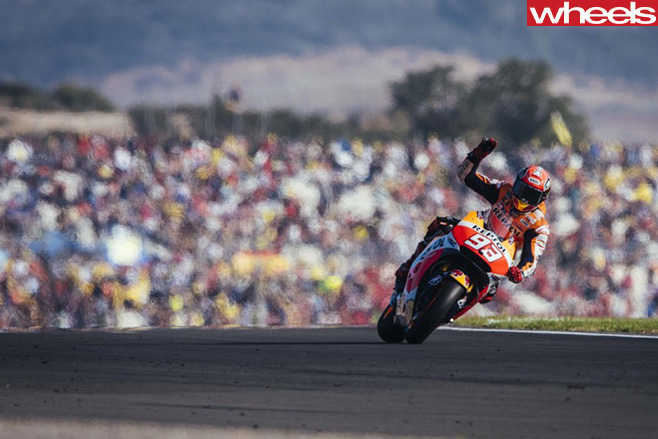 Marquez hit back, saying it was disrespectful to suggest he had not tried to win. “I always give everything and I know there will be people that will say that I have been second because I wanted Lorenzo to win,” he said.

Lorenzo, the champion by five points and the first Spanish rider to win the premier-class world title on three occasions, conceded that it was normal that his countrymen would rather see him win.

“The fact that they knew what I was going for and that they are Spanish has helped me and in another race they may have tried everything to overtake,” he said.

“Dani did well because he could have tried a crazy overtake. We are Spanish and the title remains in Spain. If it had been in Italy and with two Italians behind Rossi then it would have been the same.” 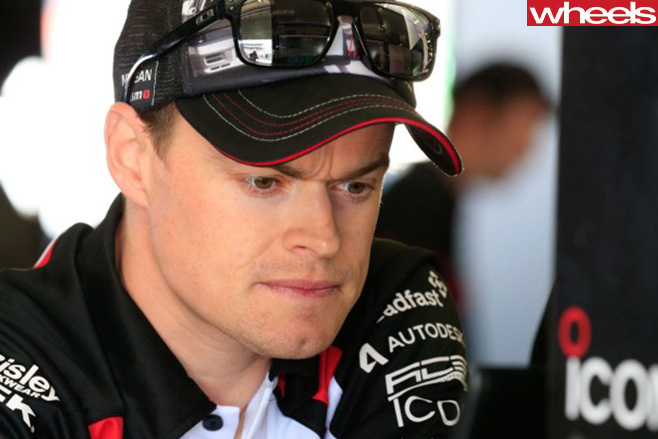 AFTER weeks of indecision, and the usual rumours that accompany the drivers’ silly season, it was good to see David Reynolds sealing his employment for 2016 after signing with Erebus Motorsport.

With no slot for him on the Prodrive Ford roster next year – a situation that raised plenty of eyebrows given his competiveness in this year’s championship – Reynolds even faced the possibility of missing out on a ride next season.

The promising Cam Waters is set to take over Reynolds’ Prodrive Falcon next year, with all other prime drives elsewhere taken.

After four seasons with Prodrive, 30-year-old Reynolds will take the seat vacated by the Tekno-bound Will Davison.  It’s the latest in a series of team-hopping transfers started months ago when Shane van Gisbergen announced a jump from Tekno to an expanded Triple Eight outfit. 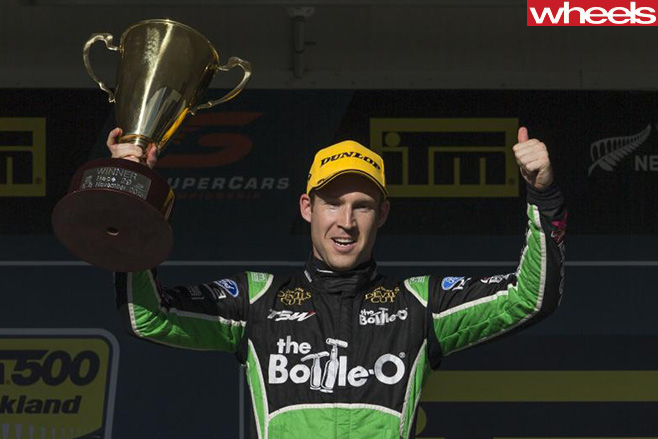 Reynolds was earlier linked to a move to Brad Jones Racing before BJR tired of the vacillation and locked in Tim Slade, on the move from Walkinshaw Racing, which in turn is probably downsizing.  Supercheap sponsorship, it is rumoured, is heading for Prodrive.

Daffy Reynolds doesn’t lack pace.  He should be an asset to Erebus, a team that like Reynolds is hardly conventional.  There has also been chat that Erebus might have another Davison – Alex – under consideration next year.

James Moffat, meanwhile, has struck a deal to join GRM Volvo next year in place of another second-generation driver, the departing David Wall.  Nissan has indicated that Moffat’s departure from the Kelly gang’s operation doesn’t suggest the team will shrink from four cars next year. 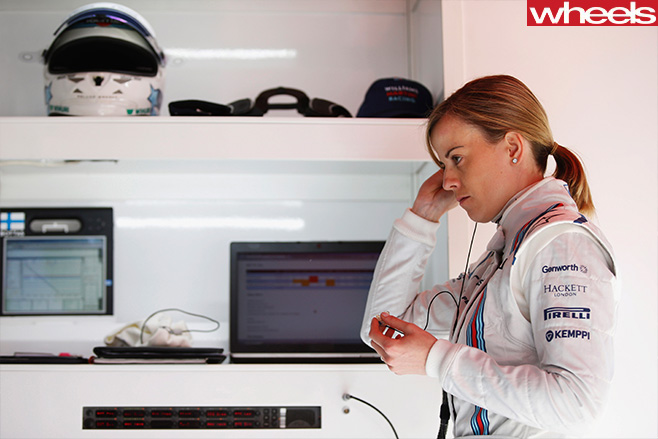 THE retirement of Williams Martini Racing reserve and development driver Susie Wolff from motorsport again leaves Formula One without a female driver – not that the Scot ever got to race in a grand prix.

She generated plenty of publicity and some expectations when she joined Williams in 2012.  But the closest Wolff got to the F1 grid was driving in four Friday practice sessions, where she was competent yet ultimately not fast enough to join an exclusive club.

The last woman to race in F1 was Lella Lombardi in the 1970s.

Wolff attracted attention with good results in lesser formulae including the British Formula Renault series and the DTM, but F1 proved just too high a hurdle.

She had to wear suggestions that her place in the sport was largely due to her connections – she is married to Mercedes F1 boss Toto Wolff, also a Williams shareholder.

Wolff was passed over in March when Williams drafted Adrian Sutil as a reserve for Valtteri Bottas, who at the time was in doubt with a bad back. It was after that call that Wolff probably realised she was never going to race an F1 car.

“I'd like to thank Williams for the opportunity they have given me over the last few years which has allowed me to achieve my dream of driving a Formula 1 car,” Wolff said, still a believer than a female is cable of performing with distinction at the highest level.

“I am now closing this chapter but looking forward to new challenges in the future.”

She will make her final competitive start in the Race of Champions later this month.

If McLaughlin was unsettled by Stone’s claims, there was no sign of it in his on-track performances.  He nailed a pole position each day, and finished with a ninth, third and sixth over the three races.