How fast do you think a 20-plus-year-old four-cylinder Nissan Silvia S13 could lap Sydney Motorsport Park?

Did I mention the Silvia has to do it on road-legal tyres, while the V8 Supercar has racing slicks?

Well, you may want to sit down for this, but the aforementioned Silvia has lapped Sydney Motorsport Park in face melting 1:22.192.

Let that sink in for a little bit. If the Supercar and Silvia started the lap at the same time, over the course of a single 3.93-kilometre flying lap, the V8-powered touring car would be over 8-seconds behind. 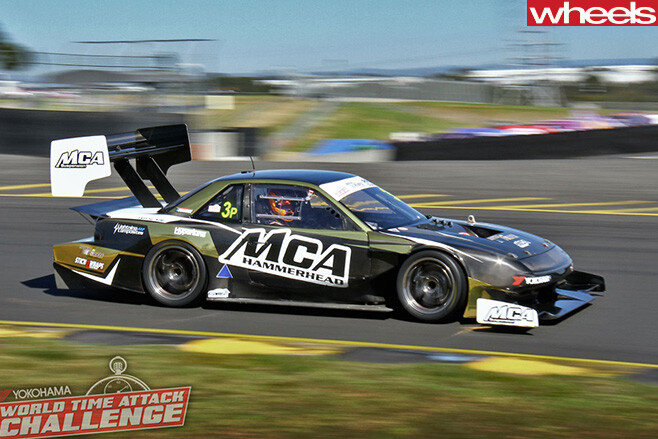 So full disclosure, this isn’t just any Silvia. It is the MCA Suspension S13, built for the World Time Attack Challenge.

Designed to meet the incredibly loose Pro Class regulations, this Silvia has enough aero to shame an airport, and its four-cylinder engine packs a serious punch.

The 1:22.192 laptime was achieved by regular Supercar driver, Tim Slade, and shattered the old tin-top lap record of 1.23.777 which was put down by the Tilton Interiors Evo at last year’s WTAC by Garth Walden.

The S13 earned itself the nickname “Hammerhead” due to the large aero extensions on the front bumper.

I can hear the critics already, complaining that this car would never be capable of sustaining that time over a number of laps, and couldn’t race door-to-door. But that is missing the point.

This is a car, built in the shed of Murray Coote, with Australian engineering nous, that is closer in terms of laptime to an A1GP open-wheel race car, then a V8 Supercar.

To get a real sense of the speed this car is capable of, watch the on-board from Slade’s record smashing lap above. It almost appears sped up in parts, but we assure you it isn’t!