V8 SUPERCARS: No surprises in step to new-generation cars

THE bait for new manufacturers in the sport is almost set with non-V8 engines and coupe body styles the essence of new draft technical regulations announced by V8 Supercars.

But nothing within the draft regulations appears to address the elephant in the room – the ongoing budget problems threatening the financial viability of a number of existing teams. 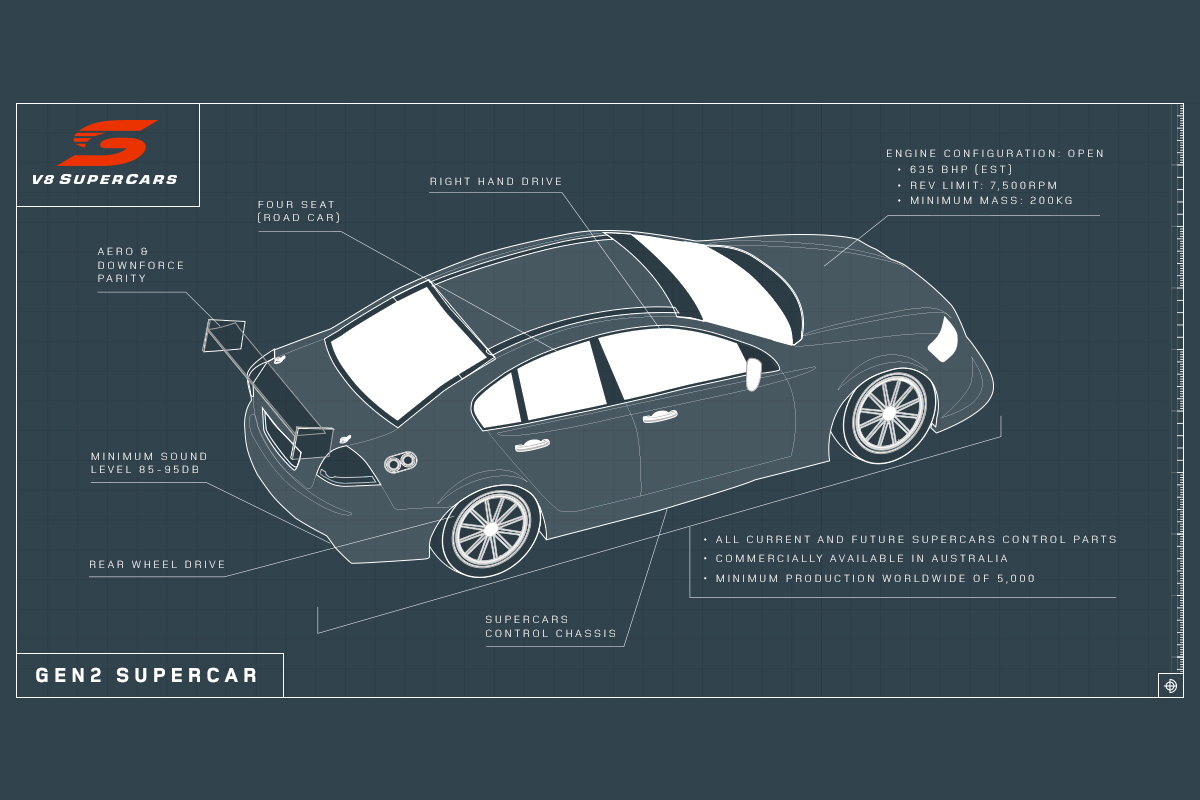 Some say there is a case to dump unique regs and instead adopt FIA’s global GT3 template for the series, handing the costly parity process to the FIA while the manufacturers fund development and homologation, and also supply complete cars and support at prices below the going rate to build a current V8 Supercar.

But some key people, especially those with profitable sidelines within V8 Supercars, are vehemently opposed.

Pre-empted late last year, the new Gen2 Supercar regs spring no surprises and are on track to come into play from the start of 2017.

Four- and six-cylinder engines will be eligible, although the V8, which has been mandated for more than 20 years, is expected to continue as the dominant powerplant of the sport.

V8 Supercars plans to green-light a test program with its own twin-turbo V6 engine, based on a naturally aspirated Holden.

The category hopes broadening the range of engine and body configurations will see it regain relevance to more manufacturers and fans while building on the characteristics that made the series so popular for two decades.

The hope is that existing engines used by some brands in other forms of motorsport could easily find a place in future Supercars.

All post-2016 cars will continue to use the existing Car of the Future chassis and control components, and be subject to current engine and aero parity rules.

The base guidelines stipulate the car be front-engined, have a four-seat configuration in the road-going version, be available in Australia in right-hand drive, and have sold 5000 identical body shapes globally.

It paves the way for coupes such as the new Ford Mustang.

“From our many discussions it is crystal clear manufacturers want to go racing with their DNA embedded on the inside and outside of the car they choose to race,” V8 Supercars CEO James Warburton said.

That DNA has been much diminished since the old days of production-based touring car racing, to the point where today’s Commodore and Falcon V8 race cars don’t include many components to link them to the road versions.

The two wins landed Winterbottom the maximum 300 points on offer, extending his lead from 95 to 248 points over nearest rival, Triple Eight’s Craig Lowndes, who had a flat weekend in the deep north.

The racing over the weekend was entertaining, with an element of unpredictability brought on by the mandated use of both hard and soft tyres in each of the 200km races. 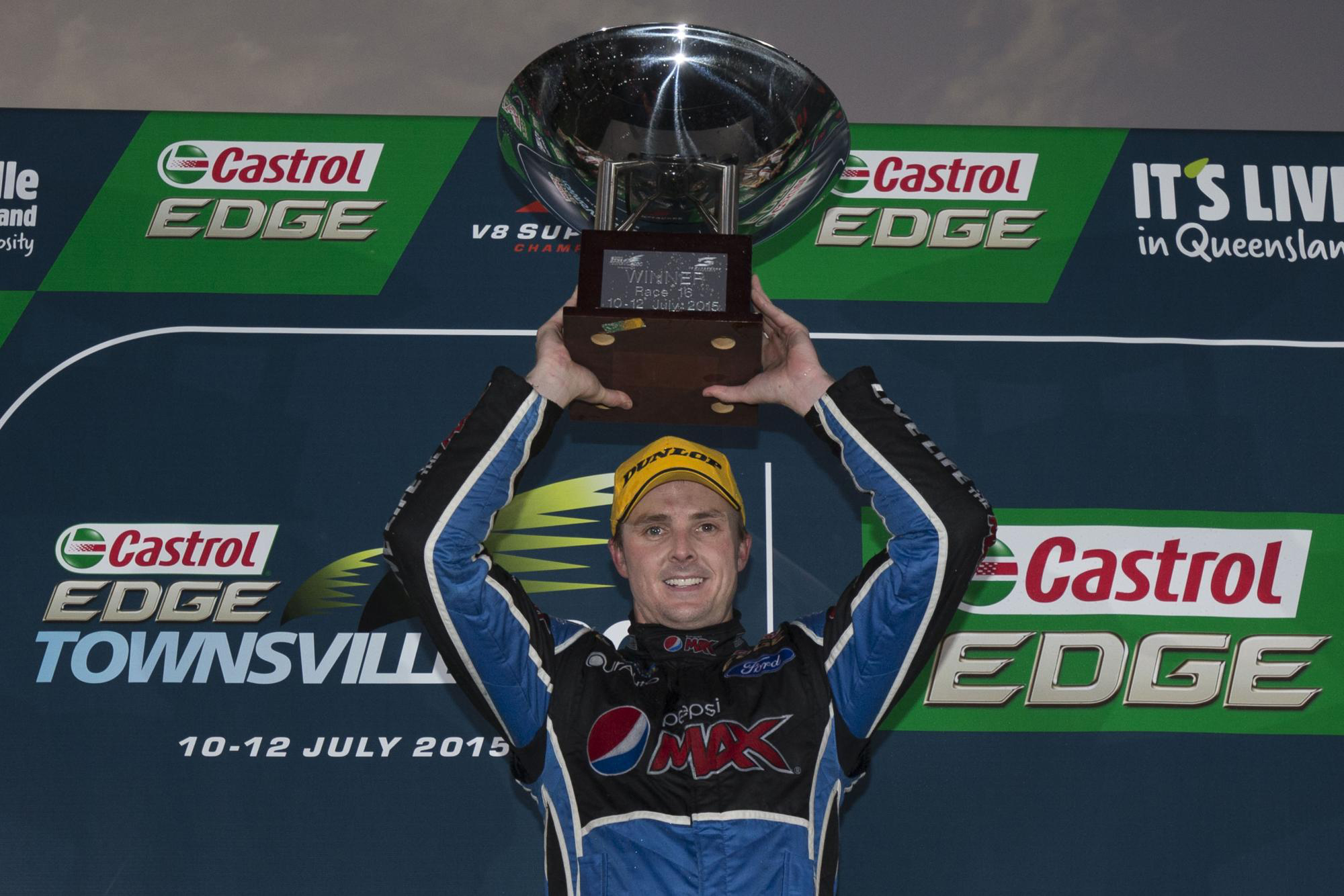 Most of the leading contenders had to deal with fast-fading soft tyres on both Saturday and Sunday.

While there were signs that defending champ Jamie Whincup is emerging from a lacklustre first half of the season, Winterbottom’s most serious rivals in Townsville were his Prodrive Falcon teammates Chas Mostert and David Reynolds.

But the man they call Frosty had the strategy, nous and skill to come out on top.

“There’s a lot of kerbs here and that’s where we have really improved the car,” he said after celebrating his wins.

“I think we can win anywhere after this round. This was the bogey round for mine. Homebush and Gold Coast now don’t seem as frightening as they did four days ago.”

On Saturday, Reynolds, well aware of the edict that drivers from the same pit garage should not crash into each other, closed up behind Winterbottom but couldn’t mount a safe challenge.

Frosty had to work harder for his Sunday win, starting fourth and finally moving to the lead past Reynolds, who was distracted by an engine issue, on lap 52 of 70.

Reynolds, looking as pacy as anyone in the field, had led from the first corner.

The two big Holden teams gained some speed overnight and James Courtney in the HRT Commodore came on strong late in the race Sunday (from 16th) to pass teammate Garth Tander without incident. He then charged by Reynolds, who clung on to claim third place and his third podium in as many races. Tander was fourth.

Speedy Chaz Mostert’s weekend promised more than it delivered. The pole winner on Saturday was quick throughout, only for a rear-end problem to drop him back to eighth. On Sunday, he again appeared in contention for the win, but his Prodrive Falcon lost tyre performance and dropped to fifth by race end.

Volvo’s Scott McLaughlin’s ended a run of recent outs with a fourth on Saturday and a brilliant pole on Sunday morning. But after getting the jump ahead of Reynolds and Mostert, his day ended early with a broken water pump pulley.

Fabian Coulthard, an impressive third on Saturday, was also in the mix on Sunday until incurring a pit-lane penalty from spinning wheels during his pit stop.

Though another Whincup title now seems like a long shot, Winterbottom remains wary and cites history: “I don’t know where he is in the points but from here last year he put about 600 points on everyone in six or seven rounds. He dominated. Who knows what he is going to do. It’s definitely not what we are focussed on. He has won six championships; he is not someone you write off, nor that team.”

WILL Power has slipped from second to third in the 2015 IndyCar Championship after he and fellow Australian Ryan Briscoe collided during the Wisconsin 250 at the Milwaukee Mile oval.

Evergreen Sebastien Bourdais took his second win of the IndyCar season – his first oval victory since winning at The Mile in 2006 – ahead of Helio Castroneves and Graham Rahal. 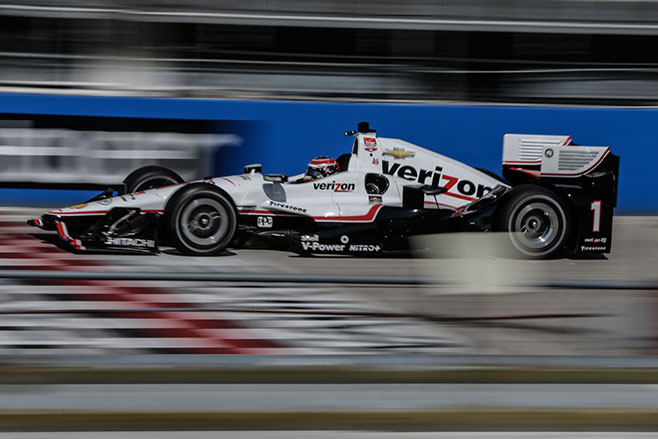 Power’s non-finish means Dixon has jumped ahead to second in the championship, 54 points behind Montoya.

Power’s race ended when Briscoe spun after a restart and collected his fellow Aussie.

“No question it makes it tough,” said Power, commenting on his second DNF in a row. “We just have to focus and move on.”

ONE of the great spectacles in world motorsport – WRC rally cars going hard on gravel, ice, snow or tarmac – will be even more outrageous two seasons from now.

New technical regulations to be introduced to the FIA World Rally Championship in 2017 have been greeted enthusiastically by teams, who also believe the fans will love the enhanced show they’ll provide.

With the objective of upping the on-stage action for spectators, acceleration will be swifter, with a return to adjustable centre differentials, a power hike from 224kW to 283kW out of the 1.6-litre engines through an increase in the turbo restrictor size, and a 25kg weight reduction. 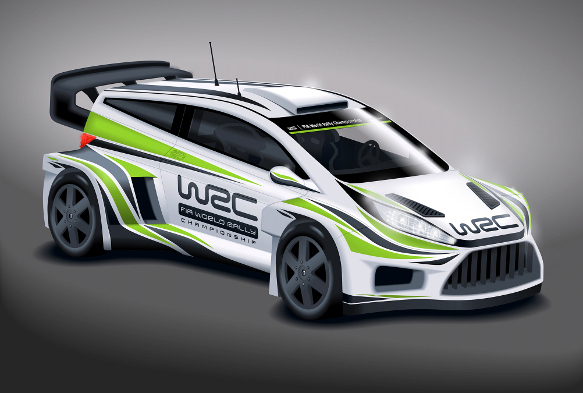 The appearance of the cars – which are based on big-selling production models including the Ford Fiesta, Volkswagen Polo and Hyundai i20 – will also get an overhaul, copping more distinct and dramatic looks with bigger wings, greater overhangs for front and rear bumpers, and larger door sills.