THE race wasn’t quite as memorable as last year’s thriller, but most of the spectators trackside at Mount Panorama yesterday were ecstatic about Craig Lowndes winning his sixth Bathurst 1000 enduro on Sunday.

Lowndes is purely and simply Australia’s favourite race driver. Even Ford fans warm to the grinning Mother Teresa in Nomex.

It was a great day for a couple of over-40s.  Experience counts when the going gets tough.

Lowndes and his co-driver, Steve Richards, came from 15th on the starting grid, safely managed a lengthy wet period when their Commodore wasn’t coping well with the conditions, and then maxed out the car’s pace in the dry.

“That last lap I backed off and really enjoyed the lap for what it was,” beamed Lowndes. “I could see the crowd going wild across the top and saw their flags flying. 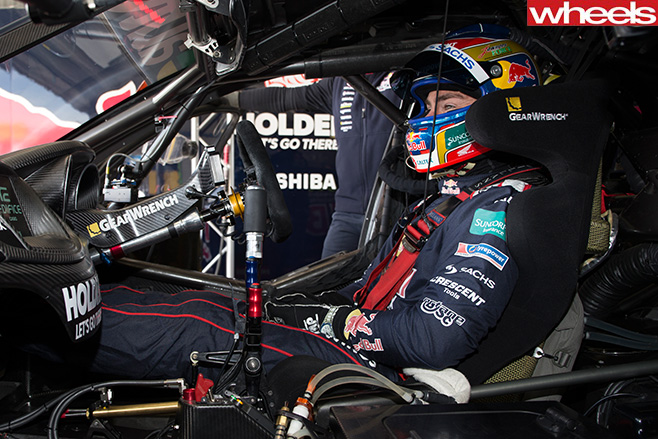 “We worked pretty hard today. Our car got better as the day went on which is what we needed. I think I’m pretty set for the year now after winning Bathurst.

“Richo is one of those quiet achievers who goes under the radar. He did everything we needed him to do today.”

Ford’s V8 Supercar Championship leader Mark Winterbottom fought tenaciously all day, with he and co-driver Steve Owen plucking second place out of a scenario that looked bleak in the first part of the enduro. They had to deal with two black flag penalties for not having operating brake lights.  Their dash gauges also went dead until a reboot.

"There were plenty of eventful things going on but by running slicks in the wet we popped out of nowhere and ended up at the front,” said Winterbottom.  “The car was alright; I really had to hammer it though. I don’t think I’ve ever driven that hard here. We salvaged something out of a situation that looked quite bad. I must thank Steve and the team for turning it around.”

A safety car triggered when Scott Pye’s Falcon broke a steering arm and speared hard into the concrete, did more than leave the driver with suspected broken ribs, and end Marcos Ambrose’s Bathurst return.  The big shunt also compacted the field and left Lowndes leading a group of potential muggers in a desperate 19-lap sprint to the chequer. 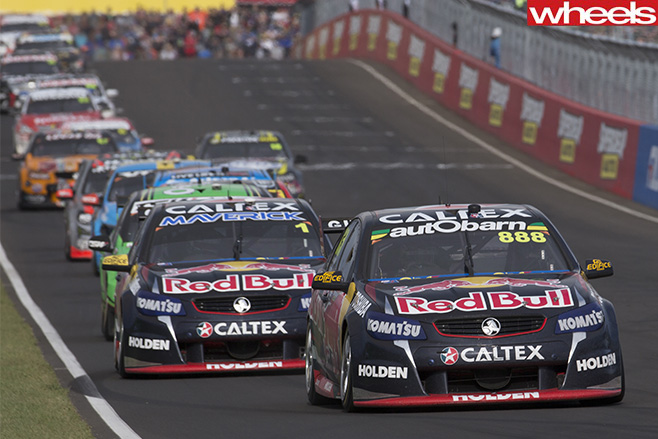 With a little help from teammate Jamie Whincup, who backed up Winterbottom and other pursuers just enough after the restart, Lowndes took off to a three-second lead which he managed carefully to the end of lap 161.

HRT’s Garth Tander and Warren Luff were third, coming from position 22 on the grid and completing a remarkable statistic; all on the podium came from outside the top 10. Well outside.

Lowndes’ latest success means he joins Larry Perkins and Mark Skaife with six wins, although at 41 he probably will struggle to match his idol Peter Brock’s nine.  Steve Richards is amassing a handy total himself; the 43-year-old has bagged four.

For the second year on the trot, defending V8 series champion Whincup was left rueing what might have been. 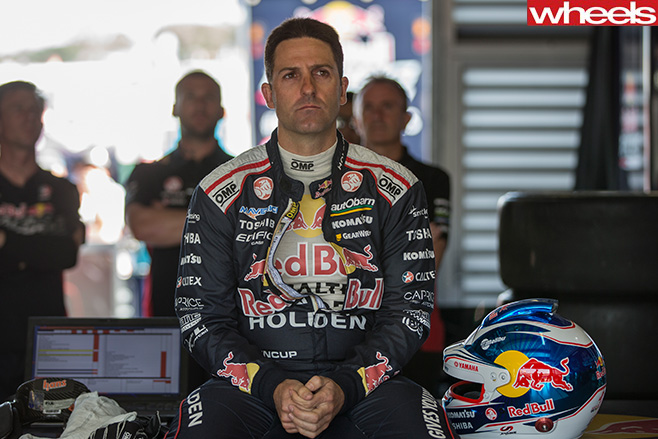 Whincup and his impressive partner Paul Dumbrell led the race for many laps, opened up a 30-second gap and looked poised to give the 2015 edition a huge shake. A pit stop to address throttle issues inhibited their charge but they were still well placed for the final lunge.

But when the safety car was deployed for the Pye incident, Whincup ignored team instructions to pit immediately for the race-defining final fuel stop, making a split-second decision to remain on the track for another fateful lap rather than double stack behind Lowndes.

Officials pinged him for overtaking the safety car, pulling him from the lead group to serve a drive-through pit lane penalty.  He ultimately finished 18th but not before a couple of heart-stopping ‘offs’ and a new race lap record.  It was a strange day in the office. 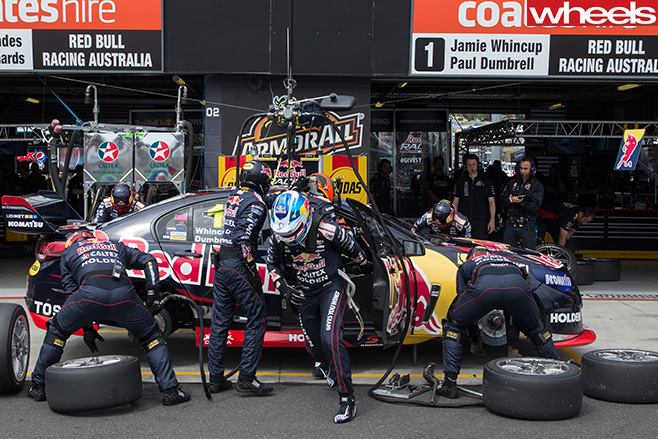 Later, Whincup was adamant the safety car was flashing green lights, meaning he could overtake.  We think he should book an OPSM appointment.

After reflecting on the enormity of his error, Whincup was more conciliatory:  “I was just trying to do the right thing – I thought I was doing the right thing, but clearly I wasn’t.”

Though not quite a serial offender, Whincup has form for shunning team advice.  In last year’s race,  his Red Bull boss Roland Dane fingered him for ignoring team entreaties to back off and save fuel.  But Whincup then ran out of petrol while leading on the last lap.

Five of the 26-car field failed to finish.  A Volvo blew an engine; four others crashed heavily.

It seemed the all-female pairing of Renee Gracie and Swiss professional Simona de Silvestro were also destined to be non-finishers when the Australian driver failed to see fluid dropped by the stricken Volvo and skidded hard into the wall at Forrest’s Elbow on lap 15.

But the team flew into action and got the battered Ford trackworthy, and they completed the race 40 laps down in 21st place.

Winterbottom might be unhappy just missing out on another Bathurst win, but he should be cheered by looking at the championship points table; he is 399 points ahead of Lowndes with the Gold Coast, Auckland, Phillip Island and Homebush to run.

What a difference a year makes

It was all over early for defending Bathurst 1000 champion Chaz Mostert after his brutal, bell-ringing stack early into Friday’s qualifying.  It was a simple mistake with cruel consequences, Mostert misjudging his slalom run down to Forrest’s Elbow.  His Falcon clipped a barrier at 170km/h and then pinballed through a series of six big impacts. The Ford was a mess but metal can be fixed or replaced.  Worse was that the car debris collected a group of flaggies, hurting one. Mostert was whisked to hospital with a fractured left leg and wrist.

Like just about every time the 1000 rolls around, Mount Panorama again dispensed favours and pain indiscriminately.

For the first time in many years, the top 10 Shootout was run in the wet.  Slippery and treacherous at the start, it then got worse.

Pole went to one of Mostert’s Ford teammates, Dave Reynolds, the same bloke left $25,000 lighter after he was fined earlier for flippantly asking if the Falcon of all-girl team of Renee Gracie and Simona de Silvestro was the “pussy wagon”.

For the first time in memory, the Bathurst 1000 began without two of its biggest stars, Mostert and James Courtney, the latter still recovering from injuries from that freakish off-track incident many weeks earlier. 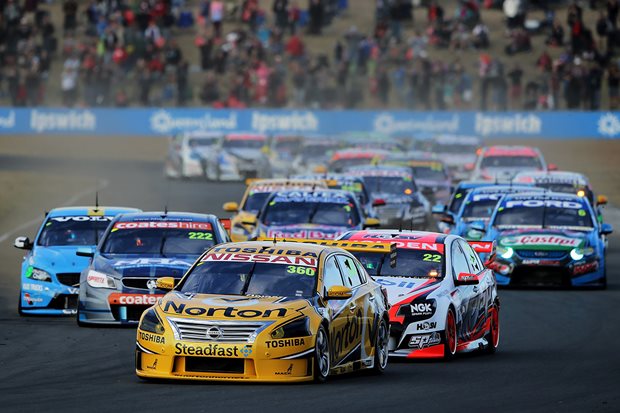 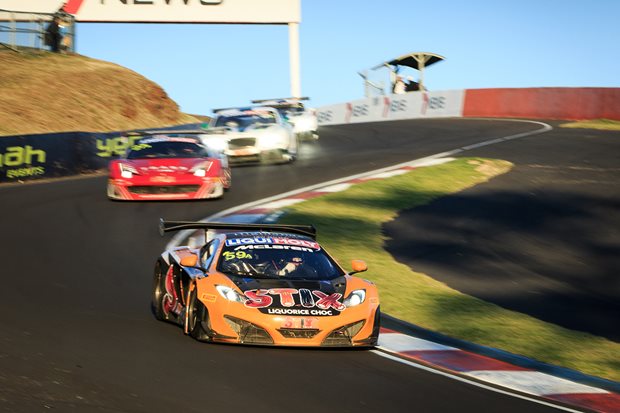 Why V8 Supercars had to buy the Bathurst 12 Hour 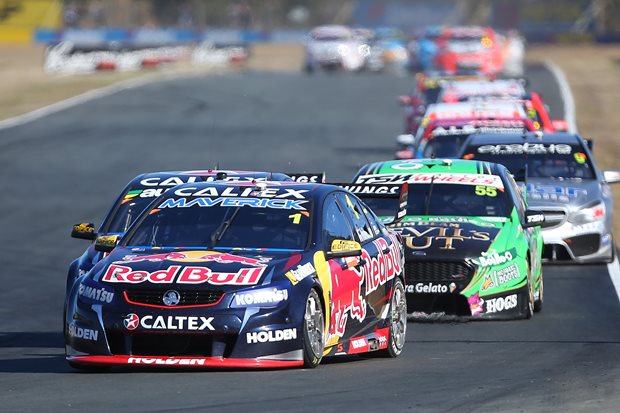