Eight rounds and 17 races into a hard-fought and tight Supercars Championship – with six hectic weekends to come – it’s very clear that Triple Eight’s expansion to three cars has not impacted negatively in any obvious ways.

In the five-week winter break between the Queensland Raceway and Sydney Motorsport Park rounds, the Triple Eight drivers Jamie Whincup (1821 points), Shane van Gisbergen (1711) and Craig Lowndes (1671) sit first, second and fourth in the championships, an otherwise neat sequence broken only by defending champ Mark Winterbottom in third with 1701.  It’s tight at the top.

Some inconsistency in the early races was quickly swept aside and the T8 driving triumvirate has been the almost unstoppable force of the past three rounds, winning five of the six races.

The highlight was that the Saturday race at Ipswich brought a T8 podium lockout.  That’s frightening dominance.

But whilst he is the driver against which all others have been judged in recent seasons, Whincup says there’s still room for improvement - certainly with car 88. Looking at individual wins to date, Whincup has notched two: the first in race one at the Clipsal and then another at Townsville.  He does like street circuits.

But he has certainly fallen short of dominating in the manner we’ve seen in other title campaigns.

His Red Bull Racing Australia colleague and T8 newbie van Gisbergen has emerged as his nearest rival, the flamboyant Kiwi claiming four wins so far - at Symmons, Darwin, Townsville and Ipswich.  Obviously, his heavy programme of racing in other categories including sports cars in Europe has honed his driving rather than distracted him.

Lowndes has scored twice: that stunner in Perth and the other in Sunday’s race at Queensland Raceway.

Winterbottom hasn’t been the powerhouse we saw in 2015, but has been hanging in tenaciously, winning in Perth and often converting poor qualifying into reasonable results. He’ll continue to be a thorn in T8’s saddle blankets.

Other wins have come from HRT’s James Courtney in race two in Adelaide, LDR’s Nick Percat in race three in Adelaide, Will Davison’s fortuitous steal on Sunday at Symmons, Scott McLaughlin’s sizzling pair for Volvo at Phillip Island, Tim Slade’s breakthrough at Winton where he won both races for BJR, and Michael Caruso’s race 12 triumph in Darwin for Nissan. 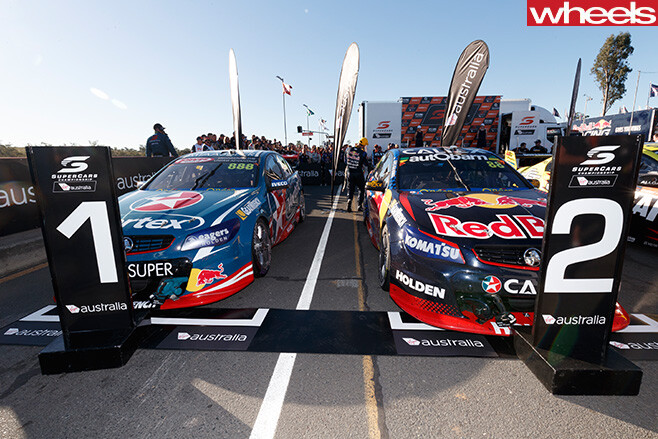 So plenty of winners, 10 in 17 races, but that rock solid, ever-present Whincup is on top…

With van Gisbergen joining the Red Bull squad, Wheels asked Whincup if this season feels any differently in the way of heightened pressure, “No, not at all.  The dynamic hasn’t changed. It felt like a three-car team last year with Shane’s car up the road at [customer team] Tekno. It’s disrespectful to say that Shane and Tekno weren’t competitive last year.

“There has been no change in the intensity.

“The big one this year is that everyone [in the media] is trying to suggest that Shane and I are fierce rivals, and suggesting it’s getting to us.  This is far from the case. We’re all working together to ensure T8 wins the championship.  We’re certainly not hiding anything from each other.  Lowndsey might have a different paint scheme and sponsor but is still a T8 team-mate and still very much in the championship mix. ”

Whincup agrees that each of the three T8 drivers is fiercely competitive and more than keen to come out on top of their often torrid intra-team battles.

But he refutes any suggestion that the team atmosphere is anything but co-operative and civil, and the rivalry never remotely approaches the bitterness some have painted. It’s competitive, sure, but a million miles from the craziness between Lewis Hamilton and Nico Rosberg at Mercedes F1. 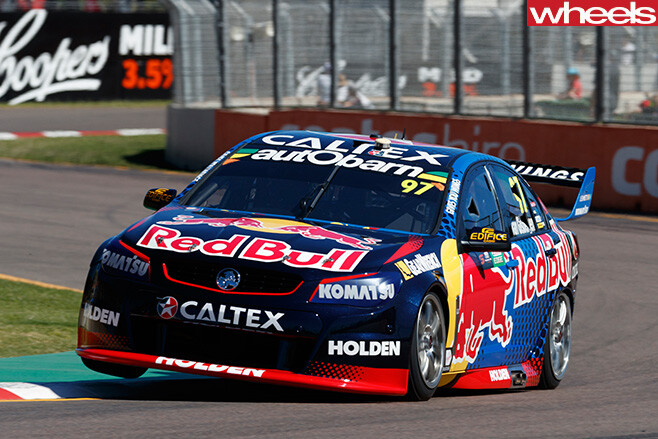 T8 boss Roland Dane would never allow it, for starters.

Whincup has the two wins to SVG’s four, but the six-times champ still has his nose in front in the points by dint of consistency.

But he suggests he is short of pure car pace. “Yes, absolutely, we’re lacking car pace. But, to explain, my car is physically the same as Shane’s and Craig’s.

“What I’m saying is we are not performing at a level we’re capable of, and I know I’ve done poorly communicating with my engineers. I’m more disappointed with myself than anyone else.

“I know I’m a tough critic.  I’m with the best team with three number one mechanics on my car, a better line-up than in previous years.

“My core job is to drive as fast and as hard as I can, and I feel I’ve done that well. Communicating the right info with my engineers is what I haven’t managed as effectively.”

“I wouldn’t be leading the championship if I had done a bad job.”