MARK Webber has found that winning feeling again, for the first time since he left Formula One.

His Porsche team took a memorable one-two finish in the World Endurance Championship at the Nurburgring, where the #17 919 Hybrid car he shared with Timo Bernhard and Brendon Hartley downed the sister car of Neel Jani, Marc Lieb and Romain Dumas by more than a lap.

The #18 Porsche’s chances were ruined by a series of ‘excessive fuel use’ stop-go penalties totalling 1m 35s, which initially dropped it to fourth behind two works Audis. The penalties were imposed after an engine sensor controlling the fuel flow failed. But the car had the pace to race back to second in the closing stages.

It was the second consecutive WEC win for Porsche, after its Le Mans triumph in June.

The latest high-downforce version of the 919 Hybrid exhibited a clear advantage around the ’Ring over the Audi R18 e-tron quattro and the Toyota TS040 Hybrid.

Audi has homework to do before the next round in Austin, Texas.

INDYCAR: Dixon is champion in tiebreaker THE GRAND Prix of Sonoma, a race blanketed by sadness after the death of Justin Wilson from an incident in the previous round, unfolded into a thriller, a nail-biter that left the 2015 IndyCar Championship in doubt until the very last corner.

After a season of 16 IndyCar races, the championship came down to this.  Scott Dixon and Juan Pablo Montoya were tied on points after the double-points decider.

And Dixon, the Brisbane-born kiwi, won the championship in a tiebreaker. He won more races this year than Montoya.

Dixon was in shock afterwards.  He went into the finale third in the points and a long shot. “I can’t believe it,” he kept on saying, after his faultless drive to victory.

"There was still a chance and that's what I was hoping for," Dixon said of the double-points race. "I don't know what to say. This season we had some big races, and this was the biggest. We were such a longshot."

Six drivers were mathematical chances to win the title, but even with double points on the table in the finale, title leader Montoya was the driver in the box seat. 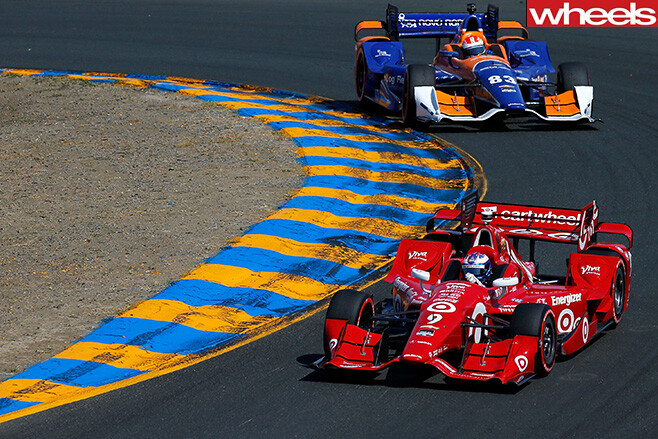 Over the course of the incident-packed race, the contenders dropped away.

Will Power’s shot at successfully defending his IndyCar title ended before half distance when, after a messy restart, he was launched into a spin by his Penske team-mate and fellow contender Montoya.

Both were forced to pit but it was the Australian who was hurt most.

“We’ve gotta decide if we’re a sport or a casino,” said Power, reflecting on a season where races were so often decided by yellows.

Both charged back but the tricky, undulating Sonoma road course in sun-bleached northern California is the hardest track to overtake at on the calendar.

With five laps remaining, Montoya’s task was to make up 3.4 secs to Ryan Briscoe and take fifth…

He failed by one second, finishing sixth. Power was seventh, but took third in the standings.

As always, pit strategy was crucial to the outcome, as were some obvious team tactics with the four-car mega squads, Ganassi and Penske.

Controversy emerged at the first wave of stops when Penske’s Simon Pagenaud propped on pit road to allow team-mate Power an easy exit. But in so doing, Pagenaud’s car effectively inhibited rival title contender Josef Newgarden’s path away from his box.

Power led until the second round of stops, when he was jumped by Scott Dixon.  Then the trouble started. MotoGP superstar Valentino Rossi yesterday mastered the most awkward of conditions at miserable Silverstone to win the British Grand Prix and race out to a handy 12 points lead over his Yamaha team-mate Jorge Lorenzo in the 2015 championship.

Lorenzo led early but dropped back as he battled with the simplest of issues - a helmet visor that misted up and hurt his vision. He finished fourth

Rossi, 36, showed his class to extend his streak of consecutive podiums finishes to 12 this season.

Lap 13 was certainly unlucky for Honda rival Marc Marquez, who crashed out as he battled to keep on terms with Rossi.  The defending champ’s title chase ended there and then.  He is simply too far behind Rossi and Lorenzo now to offer a threat, although he will continue to play a pivotal role in stealing valuable points from the contenders.

Rossi started from fourth but looked comfortable in the wet as he made his way to the front.

As the laps ran out, Pramac Ducati’s Danilo Petrucci started closing in, towing Andrea Dovizioso along with him.  The gap dropped dramatically, but Rossi responded to maintain a 3.1 sec margin at the chequer.

“I‘m very happy and proud of this victory, it‘s a great feeling! I think that the last race in the wet that I won was 10 years ago,” Rossi said. “I fought a lot with Marc, which was very difficult. I kept trying to break away but he stayed with me. I saw that Marc crashed on the mega screen and I didn‘t hear noise of his bike, so I already thought that maybe something had happened.”

Aussie Jack Miller was left to rue what might have been.

The Queensland rookie made a stunning start from 16th to charge past rider after rider, and into a hectic battle with his LCR Honda team-mate Cal Crutchlow over fifth – in just two laps.

But exuberance got the better of Miller. He slid into the Brit, sending both down.  And out.  That garage would have been a tense place afterwards.

In Moto2, Frenchman Johann Zarco delivered a lesson in tyre management on a drying track, bolting away as smooth as you like to win from Spanish duo Alex Rins and Tito Rabat.

Most of the field stayed on the treaded wets on a track that offered a wide dry line from mid distance.  The leaders finished on virtual slicks. Neil Crompton will leave the commentary box to get back into a race machine at next Sunday’s annual Muscle Car Masters at Sydney Motorsport Park, when he accepts an invitation to  take over the Ford known as Mustang Sally.

Crompton races only sporadically these days – enough to keep his CAMS licence – and has never tried a TCM (Touring Car Masters) beast.

But the madly popular Muscle Car Masters event seemed an appropriate occasion for Crompton to acquaint himself with the TCM Mustang driven to many victories by John Bowe and, more recently, Steve Johnson.

Bowe’s generosity with the Mustang has meant Johnson – winner of three rounds in as many starts in the American ’Stang - has been forced to switch to an Aussie-built Falcon GTHO as he attempts to continue his winning ways in the TCM competition.

Bowe has the luxury of a choice of a couple of competitive cars and will again wheel out his Torana V8 in search of more success on Father's Day. 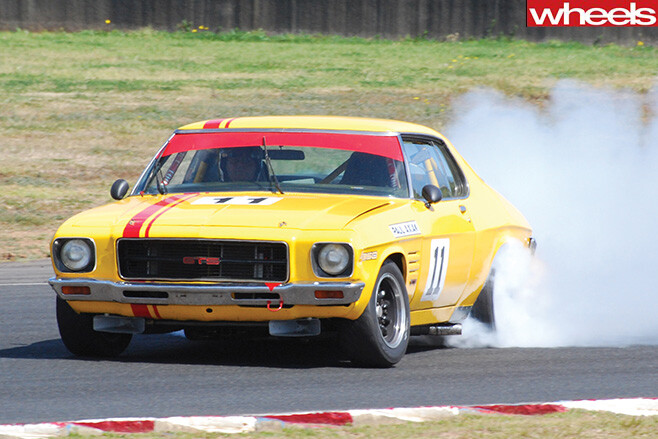 Crompton’s name on the entry means the TCM grid takes on the look of a touring car championship line-up for the 1990s, with the likes of Bowe, Johnson, Andrew Miedecke, Jim Richards and Glenn Seton also in the Nomex.

“You never lose the passion for race driving but as life changes the opportunities diminish,” said Crompton. “It’s not an easy thing to do well, especially when you’re low on mileage, so the best approach is be positive, relaxed and realistic.”  Yeah… right.  Heard that before.

The Muscle Car Masters – a celebration of great touring cars of the 1960s, ’70s and ’80s, and the men who raced them – is always a memorable family day at the track, with kids under 12 admitted free.

The cars many of us grew up watching will be there - Toranas, Monaros, Falcon GTs, Chargers, Mustangs, Camaros, Commodores, Nissan GTRs… Sydney’s Joey Mawson has won the third of three Germany Formula 4 races on the history-steeped Sachsenring circuit to give his title hopes a handy boost.

Earlier, Mawson (Van Amersfoort Racing) took a third and a fourth place in races on Saturday and sits a solid third in the standings.

The championship continues to be led by Marvin Dienst of the HTP Junior Team, who won both Saturday races and took second on Sunday.

"This victory is fantastic - probably the best of my career so far," said Mawson after recording his third win of the season. From seventh place on the grid, he got off to a lightning start, immediately moving into fourth.

At a restart, Mawson seized the chance to overtake second-placed Mike Ortmann and then on the penultimate lap, he moved past Kim Luis Schramm to the lead.

The 19-year-old CAMS Foundation-backed driver has two rounds and a total of six races remaining in the championship to overhaul the two men ahead of him in the points.