Motorsport report: Queensland boys Will Power and Jack Miller shone this weekend, with both putting in stunning performances to win on the global stage.

Our boy seems to have rediscovered his mojo

In front of the largest crowd in Road America history on Sunday, Will Power raced to his second Indycar championship win of the year after a tense fight to the flag with Tony Kanaan. 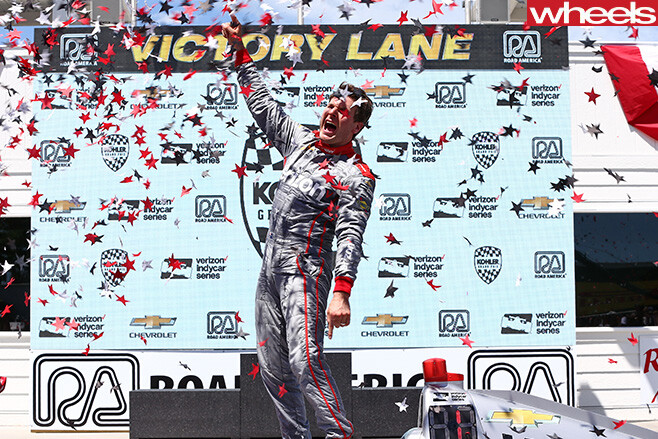 Power, who started from pole in a Team Penske Chevrolet, held off Kanaan in the NTT Data Chevy by 0.7429sec to claim his 27th career victory, in a race that offered unrelenting entertainment.

The start featured plenty of action, and early trouble for a pair of four-time series champions. Power led from the get-go, but Sebastien Bourdais suffered damage to the rear of his KVSH Racing Chevrolet and had to pit on the first lap to replace the rear wing assembly. 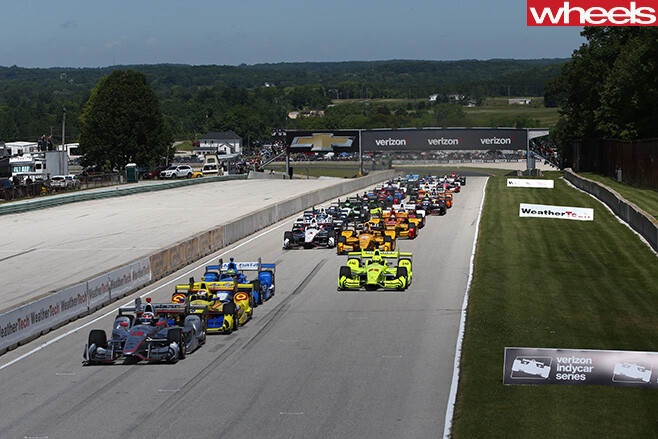 Six short laps later, Scott Dixon, who started on the outside of the front row, had to retire his Ganassi Chev due to a mechanical issue.

Power controlled the race throughout, dropping the lead only during the cycle of pit stops.

While a plethora of battles erupted in the middle of the top 10, Kanaan slowly cut the 2.5sec deficit to Power to less than half of a second when the white flag flew. But Power had it in the bag, notching his second consecutive win from Kanaan and Graham Rahal. 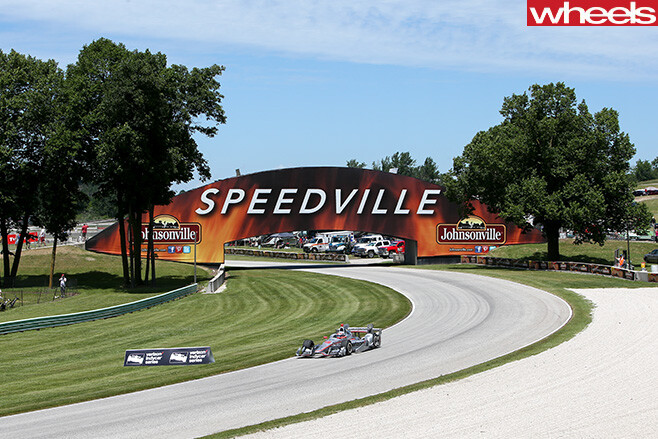 Steeped in the US’s colourful motor racing past, Road America is of the standout road courses beloved of circuit racers of all disciplines. Located near Elkhart Lake, Wisconsin, it has hosted races since the 1950s and currently has on its annual schedule NASCAR Nationwide Series, American Le Mans (Road America 500), SCCA Speed World Challenge Series, and the AMA Superbike series. 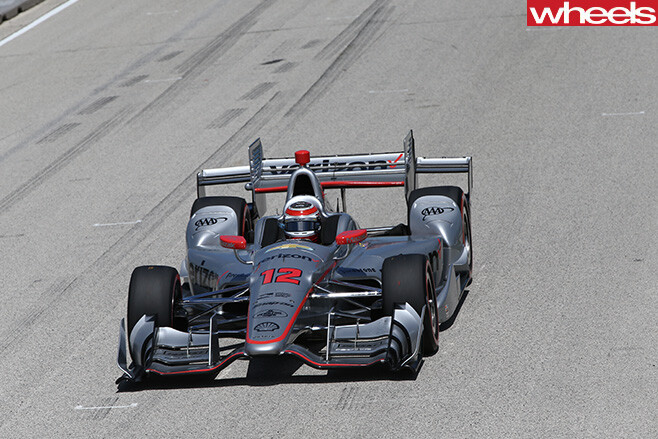 It was the ideal venue for Power to emphasise he is right back in the Indycar game.

Rain proves to be happy Jack’s salvation at Assen

Within hours of re-signing with his Marc VDS team for a second year, Queenslander Jack Miller pulled off a remarkable maiden win in the MotoGP class; out-riding all the big names at a saturated Assen, to immediately reward his Belgian team for the faith shown in him.

Miller carried his palpable relief at the contract extension into the Dutch TT, a race run in two parts after heavy rain brought out the red flags after 14 laps with pole man, Ducati’s Andrea Dovizioso leading from Danilo Petrucci (Ducati) and Valentino Rosso (Yamaha). 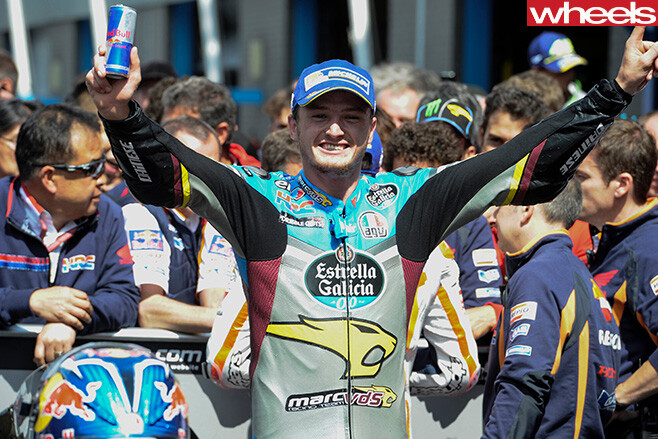 After the decision was taken to wait half an hour for the atrocious weather to ease, the grand prix was restarted, with riders gridding up in the order when the contest was halted.

Miller’s dirt track background and training was an obvious asset in the ensuing 12 laps, the Australian sliding through the damp, from eighth to fourth. Dovizioso took a heavy roll through the gravel and then one lap later Rossi fell too, making Miller’s chase a little easier and the non-factory Honda soon chased down the works Honda of Marc Marquez, who was up front.

Eight laps from the chequer, Miller audaciously ducked underneath the Spaniard, and then quickly pulled a margin which he controlled to the end, stunning the paddock with his first MotoGP success. The triumph comes with perfect timing; Miller has had a tough season with crashes and injury and too few encouraging results. Until the weekend. 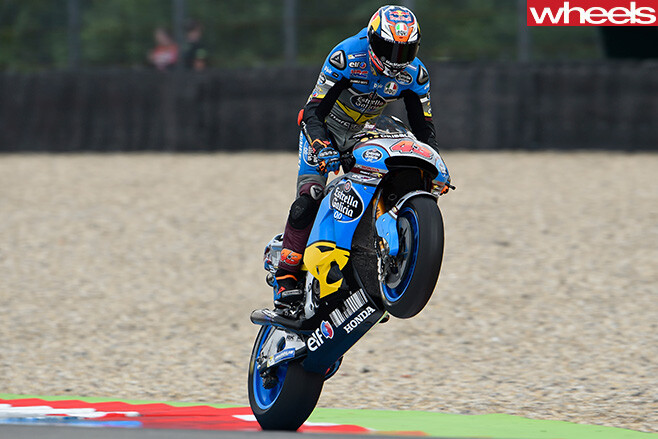 His victory was the first by an Australian since Casey Stoner dominated at the 2012 Australian Grand Prix.

The Cathedral is never an easy venue to master, but Miller showed a mastery of the slippery conditions.

“I don’t know what to feel at the moment,” said the emotional Miller. “A lot of people have badmouthed us and said that this project wouldn’t work.

“I just hope we’ve showed them wrong, and I can ride the bike, and I’m not an idiot.”

“Thank you to Honda for taking this risk on me,” he added. 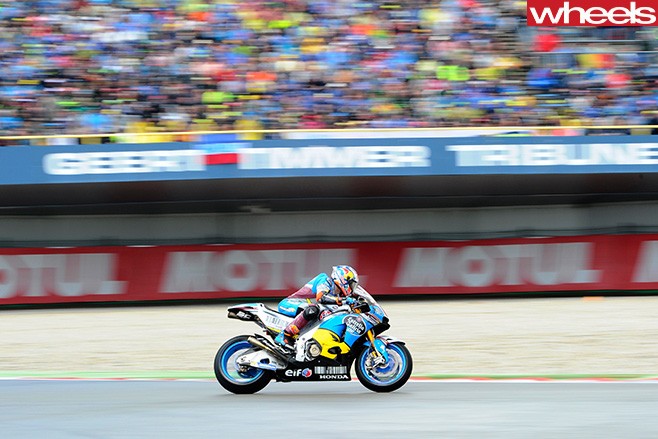 In other bike news,  and not wishing to go down the path of aero-doom that has hobbled Formula One for decades, the Grand Prix Commission has unanimously agreed that, with effect from the 2017, the use of aerodynamic wings in the MotoGP class will be banned. The actual regulation will replicate those for the Moto3 and Moto2 classes where the use of wings is already prohibited.

Wings that comply with current technical regulations may continue to be used for the remainder of the 2016 season.