Things didn’t all go to plan when Wheels threw two of the Porsches against one of Australia’s most engaging driving roads.

I MUST admit I was expecting spinal damage, or at very least chipped teeth and bruised buttocks, and yet I signed up anyway, without a second’s thought.

I could have been more excited about driving the ultimate version of the Porsche Cayman, the only GT4 in the country, and the staggering new GT3 RS back to back if I’d been told we’d be doing so on a track, because that would seem like both the more sensible and exciting option.

Alas, our plan was to take these two track monstering beasts out onto a public road, suitably titled the Thunderbolts Way, and find out how they work in the real world. 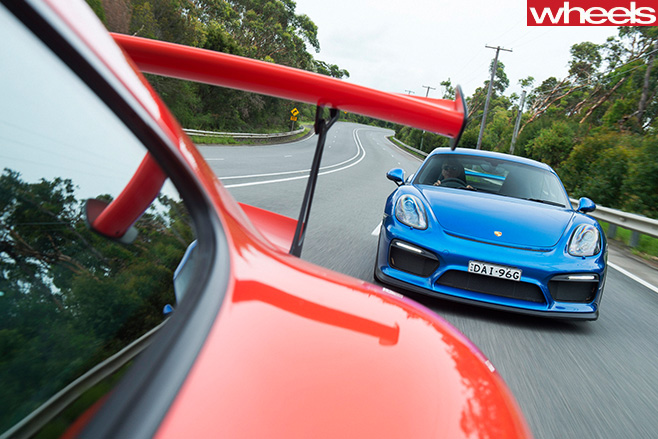 This was a suitably Wheels magazine approach putting these indisputably brilliant cars to what would be, for them, the ultimate test, but surely it would also test the very structure of our bodies, and all the jiggly bits therein?

There’s a reason that cars like this are always launched at race tracks - usually fast, expensive ones like Phillip Island - because it’s where they shine. On smooth surfaces, the fact that the suspension has been tuned up to “brutal” is an asset rather than a demerit and you’ll generally read in launch reviews that Track Car X is amazing at the Island, but we’re not sure how physically demanding they’d be on a bigger island, like Australia (or even Tasmania).

The first few minutes of our test route, through the middle of Sydney where the roads sometimes appear to have been attacked by giants with hammers in the night, appeared to realise a few of my fears. 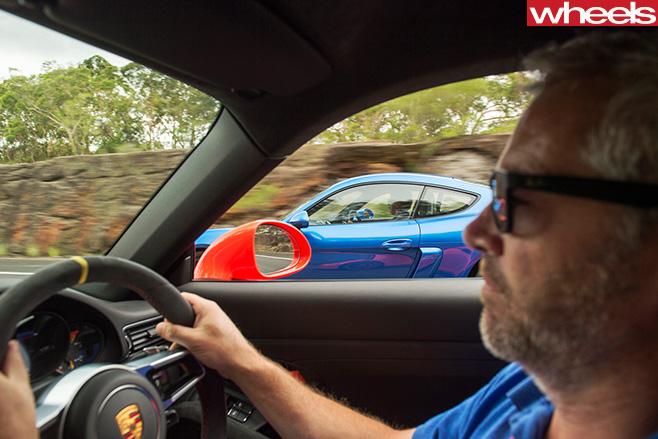 The Porsche 911 GT3 RS -  a vision of menacing absurdity with its wild wings and scoops and very un-Porsche-like shaving cuts on its front fenders - is a masterpiece of weight saving, coming in at just 1375kg (20kg less than the GT3), which allows its owner to get full value from the highly absurd 4.0-litre, 368kW and 460Nm engine.

Ask any supermodel, however, and she’ll tell you through gritted and scarily white teeth that being that skinny means going without a lot of things, and in the case of this super 911 model that means any kind of sound deadening.

The result is that you are exposed to all kinds of noises you’d never expect to hear in a car that costs $411,000; whining, clunking, banging and even a bit of wheezing at low speeds. It’s industrial in there, quite frankly, and there’s precious little separating you from the outside world, either (perspex doesn’t have the noise-cancelling properties of glass). 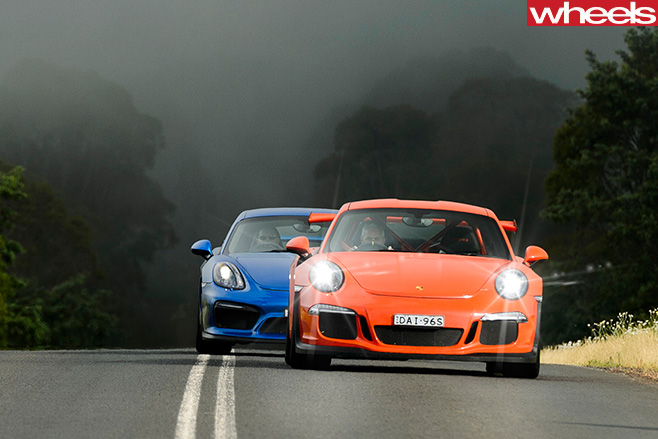 This became particularly clear after we drove into the kind of rain storm that makes you think the world is about to end. The sensation that the rain was actually panelbeating the roof was bad enough, but the fact that the barely legal, semi-slick 325/30 rear tyres on 21-inch wheels were not designed with puddle-plugging in mind was more of a worry.

By the time we reached the start of the Thunderbolts, shaking and shaky from the stress of staying on the road, we’d have bet that things could only get better.

While both the Cayman and 911 generated plenty of tyre roar and expansion-joint banging on the F3 freeway up, the ride quality was surprisingly liveable. Hit a big, or unexpected, hole in the road and you’re definitely going to do the uncontrollable swearing thing, but generally they both rode better than we’d dared to hope. 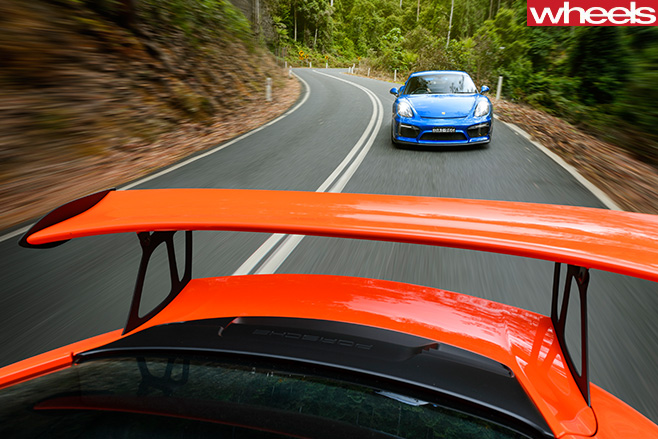 Sadly, the Thunderbolts was going to put them to a far more challenging test, because it turns out that this long-time favourite of motorcyclists and other cornering enthusiasts has been afflicted with what looks like a particularly powerful version of acid rain (or, more likely, the walloping impacts of a zillion logging trucks) and then left to rot.

Bits of it are still fabulous, but the parts in between are simply too awful to endure, particularly in GT-badged Porsches. Both cars did their best to stay connected to the road, but doing so was painful, and regularly interspersed with moments of being launched into space.

That the GT3 RS got both me and it to the end of the road in Walcha is, frankly, miraculous, and it was that ability to survive in such extreme conditions that we commented on more at day’s end than even this car’s stupendous acceleration, grip and steering. 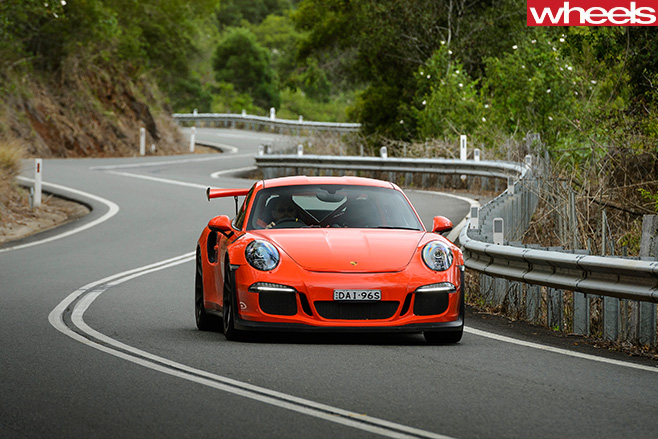 Fortunately, a more realistic test of these vehicles’ real-world abilities was just around the corner. And the corner after that, and so on, through the 300-plus bends of the truly fabulous Oxley Highway.

On this surface, which is apparently treated with great reverence by local road workers, many of whom just happen to be keen bikers, both Porsches came into their own.

A track-focused car simply has no right to be as fantastic on road as these two were on the Oxley. I started in the Cayman GT4, which felt fast and frenetic and hugely planted on the fast sweepers out of Walcha. While its ride is firm in the city, on this kind of road it feels magnetic and magical and it soaks up what bumps there are with typical Porsche brilliance. 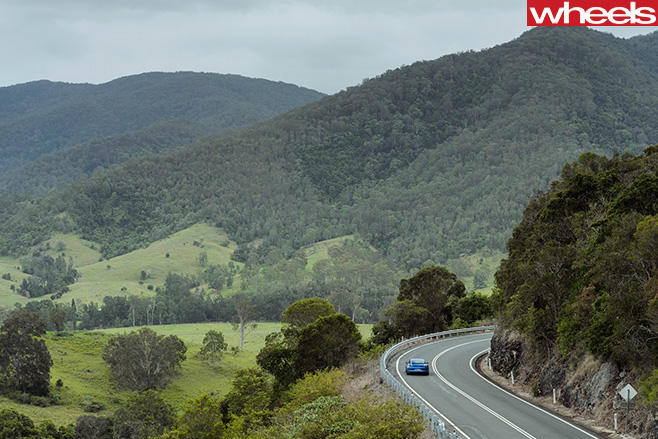 It also involves you marginally more than the GT3 RS thanks to its creators’ insistence on making it a manual gearbox-only purist’s car. Every shift is a symphony.

There is certainly some merit in the argument that, at $190,300, this GT4 is the best Porsche for almost sensible money, ever. Combining the mid-engined balance and poise of the Cayman with the snarling 3.8-litre six cylinder from the 911 Carrera S is one hell of a marriage.

Unfortunately, to step from this car into the RS is to be reminded why the 911 is, and will always be, the king of the winding road. An 85kW power advantage is a handy start, as is the fact that you’ll hit 100km/h more than a second quicker (3.3 seconds vs 4.4), but it’s the way the GT3 gets its power to the ground, everywhere, all the time, that really slays the Cayman. 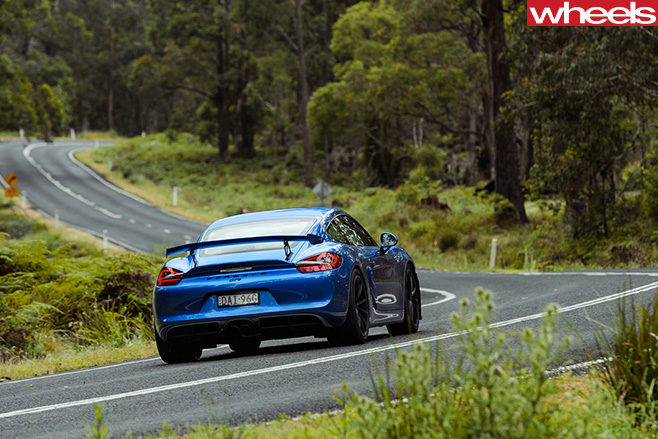 Quite simply, it cannot keep up, because the bewinged orange monster is 15, 20 or even 30km/h faster into every corner, seems capable of holding higher apex speeds and launches out the other side like something spat from a volcano.

To drive it on a road like the Oxley is to be left shaking, dry-mouthed and delighted. It takes you to places that very few cars can, and it manages to do so with remarkably little rough-housing of your body. The seats, with their slightly wanky racing harnesses, are nowhere near as comfortable as the excellent leather buckets in the GT4, but you genuinely can drive distance in them - the only real pain comes when you want to get in or out.

Genuinely, the ride/handling balance of the RS is so, so much better than we’d dared to dream, to the point where you seriously would consider having one of these and using it on the road. 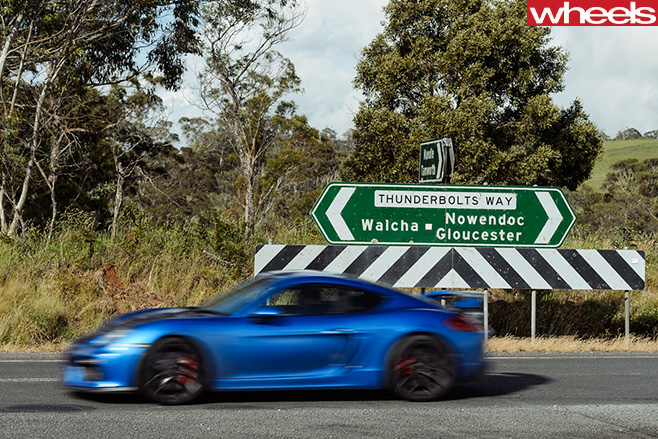 Except you wouldn’t, because occasionally you’d have to drive it through a town, or on something like Thunderbolts, and then it would just be a bit too much like hard work.

And then there’s the large problem of price. When you’re spending beyond $400K, you’d surely want something that looks a bit more special than a 911 that’s been attacked by the Pimp My Ride goons. Ferraris and Lamborghinis make it look a bit cheap, which it’s not.

There’s also the small problem of exploding, which we discovered near the end of a fantastic day’s driving. Fortunately, editor Butler was driving the GT3 RS when the engine made some horrible noises, went bang and produced enough white smoke to have him wondering where the fire extinguisher had gotten to (see below). 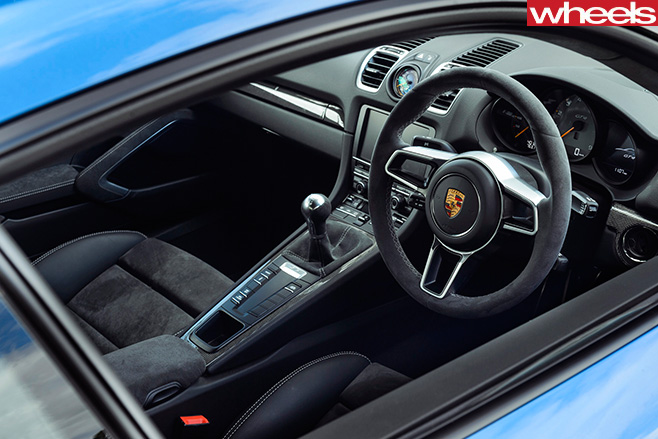 Coming off the back of the recall of 785 911 GT3s in 2014, to replace the engines and fix a small problem with catching fire, it’s raised some questions about just how tightly wound, and close to its maximum tolerances, this screaming 4.0-litre is.

What we know for sure is that both Porsches passed the real-world ride test with high-flying colours, and plenty of high-octane joy.

And my back wasn’t even sore, let alone broken, after three days of supposedly battering it. Result. 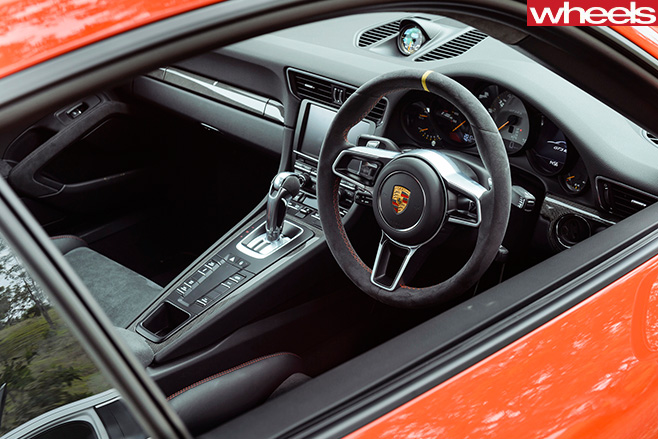 At 7000rpm, the 911 GT3 RS’s 4.0-litre flat-six was making 21,000 loud and lovely bangs every minute. But this particular bang was orders of magnitude louder than the rest. And terminal.

I backed off. A warning message came on telling me the engine was in reduced-power mode and that I should take it to my nearest Porsche service centre straight away. By the time I’d finished reading that alert, the engine had lost all power and great plumes of white smoke were billowing out behind the bright orange 911.

I put it in neutral, coasted the stricken Porsche off the road and got out, engulfed by what I quickly realised was oil smoke.

My first thought was, ‘What have I done?’ My second was, ‘Is it going to catch fire?’

The thought of a GT3 RS burning to the ground in front of me was too horrible to contemplate. Unfortunately, the spot in the passenger footwell for a fire extinguisher was empty. Fortunately, it didn't catch fire, and the smoke died down.

For the next three hours, as we waited for a flat-bed truck to arrive, I replayed those moments over and over in my mind, reliving every second, searching for a mistake. My mistake.

Two weeks later, I learned it was not operator error.

After demanding that the sadly deceased engine be sent to Porsche HQ in Zuffenhausen for examination, a verdict on cause of death was relayed to us.

“It appears that the valve keeper that keeps valve and valve spring assembly together has either failed or was not installed correctly,” was the Germans’ verdict, with the emphasis on “appears” all theirs.

On the one hand it’s unlike Porsche to be unsure about anything, but on the other it’s even more unlike them for a part to fail or be installed incorrectly. One of its Stuttgart-based boxer-engine experts admitted to us that, no matter how much you over-engineer things, accidents and errors can still occur.

It’s certainly true that this 4.0-litre flat-six stretches the bounds of engineering ability, and there was that problem with it, back in 2014, when all 785 911 GT3s had to be recalled because of potential engine fires. What we have to believe – and what Porsche believes, unless more GT3 RS engines go bang – is that we were the unfortunate victims of a freak occurrence.