As far as fair fights go, this one may raise an eyebrow from both the bookies and the managers of both combatants.

In the blue corner is the box-fresh, fourth-generation Ford Focus, a car Blue Oval insiders tout as “the best Ford we’ve ever built.” 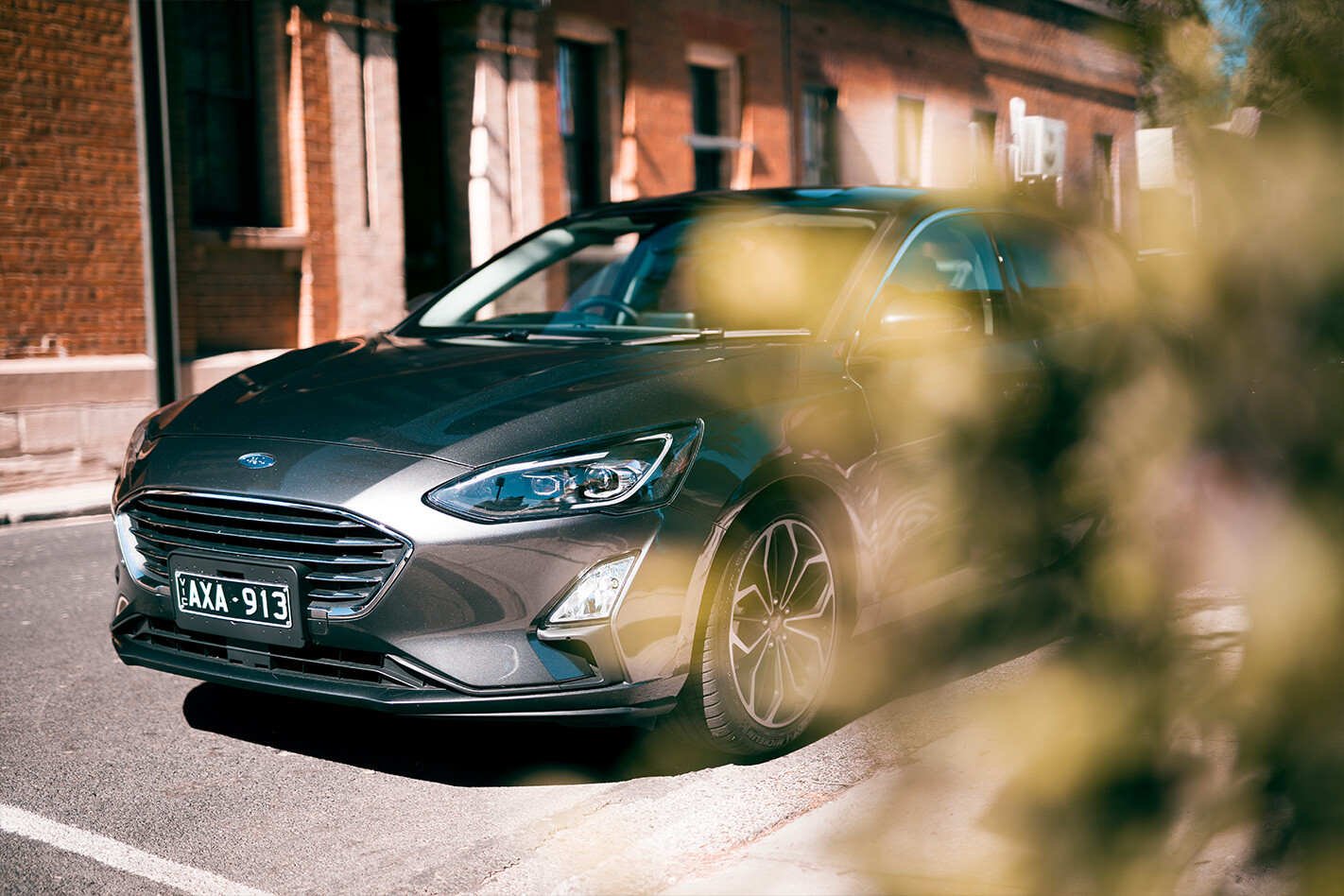 In the red corner we have the seventh-generation Holden Astra, an accomplished small car, no question, but three years older than the Focus, and a perennial underachiever on the Aussie sales charts compared to class rivals like Corolla, Mazda 3 and VW Golf.

So is this a clear case of fresh is best? Or does the slightly greying Holden have the stamina and smarts to stoush with the sprightly Ford? There’s the bell, let’s get it on.

Our top-spec $34,490 Titanium includes tasty inclusions like a wi-fi hotspot, wireless charging and remote-activated windows. But there’s no driver’s seat memory while adding a sunroof and head up display add $2K and $300 extra respectively. With $650 metallic paint and $1K self-parking, our Focus commands $38,440. 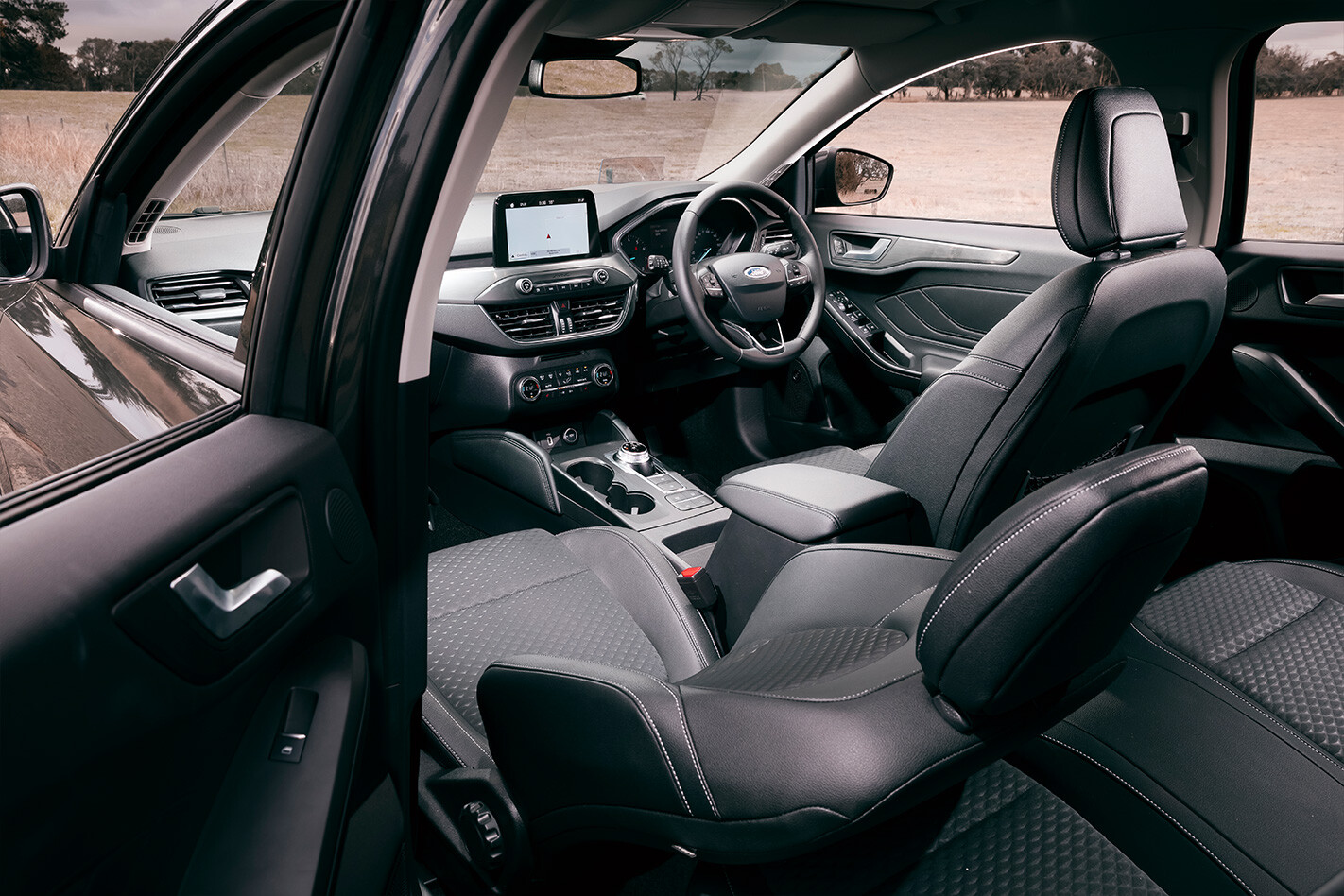 Our Astra RS-V lists at $31,740, but that quickly ramps to $36,280 with the inclusion of a $4K Innovations Pack bringing Opel’s excellent adaptive LED matrix headlights, sunroof and adaptive cruise, plus $550 for metallic. Auto up/down electric windows, powered front seats and rear centre armrest aren’t available, but auto parking and remote starting are fitted, as is a punchy 147kW/300Nm 1.6-litre four-pot turbo/six-speed auto combo. First slight letdown with the Focus is its interior. In isolation, there’s plenty going for the Titanium – not least the plentiful space, storage and ventilation, as well as sufficient vision, comfy seats and simple, logical control layout. And though dated to look at, Ford’s SYNC3 multimedia interface still works fine. But the dash screams budget at this lofty price point like it’s meant for a Fiesta, with lower-quality materials than anticipated in many areas; the instrumentation – while comprehensive – possesses zero flair, and the rear of the cabin seems from a lower grade, with no face-level vents and some noise intrusion. The interior is an amalgam of two design proposals and it shows. The opposite applies inside the Astra, since Opel clearly worked to a single vision. It looks from a bygone era, and on the move, there’s even more tyre roar intrusion than expected and chatter over bumps is palpable. 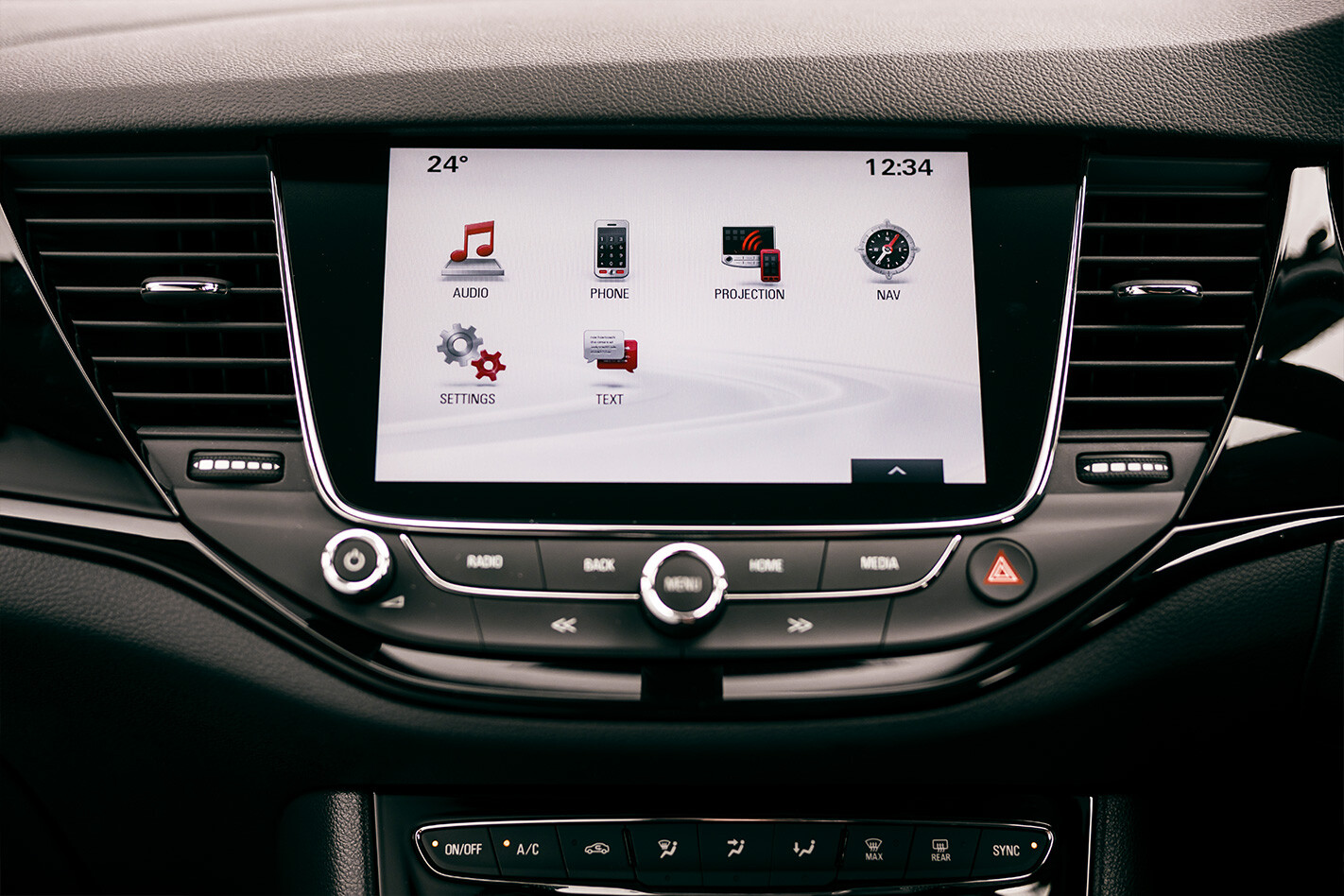 But as a box-ticking exercise, the cabin is purposeful, comfortable and spacious, and the seating adequate front and rear. That said, the cabin’s second row seems cold and barren compared to even that of the Focus, with bottom-drawer plastics, AWOL vents and no centre armrest. And up front, weirdly, the left-side occupants’ legs must angle slightly askew to the right.

The Holden is the noisiest of this pair, but at least the Astra’s rousing din is somehow in keeping with the prodigious performance on offer. Make no mistake; the Astra delivers warm-hatch performance, tearing through each speed increment faster than the Ford by some margin (though with 6000km on the odo against the Ford’s 2000km, the Astra had the advantage of a well-run-in engine.) 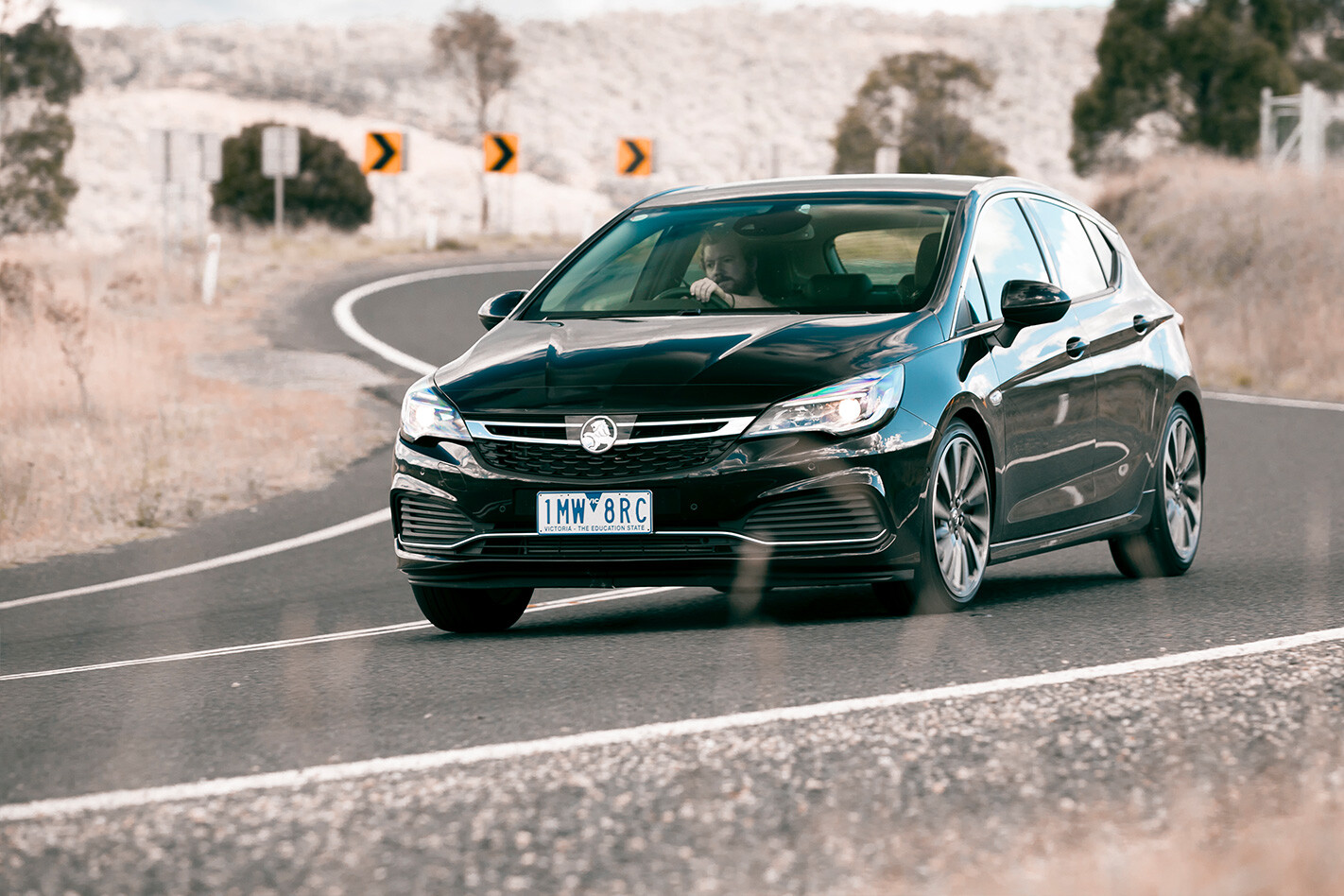 Hence it was quick against the stopwatch. At 60km/h, the Holden was a full second ahead of the Focus; at 100km/h the gap blew out to 2.0sec, and by 140km/h, the divide ballooned by over 4.5s. Lusty and eager to break traction in the lower gears, the Astra’s 1.6 turbo roars into life and storms from point to point. RS-V may as well stand for ‘Rocket Ship Velocity’ in this context.

Okay, 0-140km/h is interesting for comparative context, but perhaps not so relevant in the real world. What is relevant is the overtaking ability – the crucial 80-120km/h measure. Here the Astra continues its dominance: just 4.3sec on the wrong side of the road, compared to 5.9sec for the Focus. 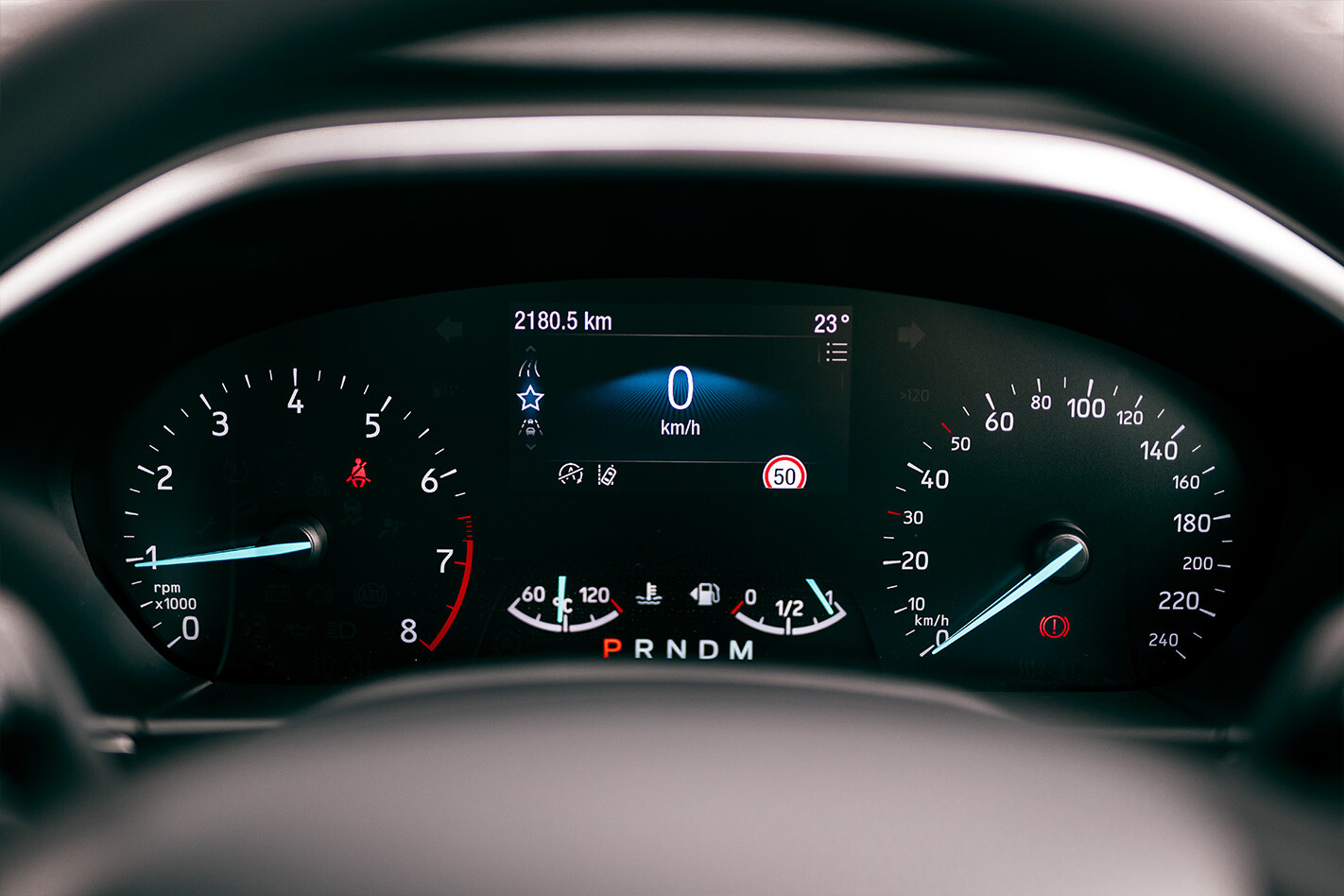 It’s worth reiterating that the barely run-in Focus was, at 8.7sec to 100km/h, half a second shy of our ST-Line’s results several weeks earlier. But like the latter, the three-pot turbo Titanium’s seat-of-the-pants reactions feel much brawnier than what the stopwatch says. Feisty off the line and punchy through the gears, thanks in part to eight well-chosen auto ratios, the Ford feels lively and responsive. And while its 9.5L/100km average consumption was nothing to get excited about, it was 1.8L/100km less thirsty than the Astra, which glugged down the premium brew at a test-average of 11.3L/100km. Trust us, your numbers will almost certainly be more parsimonious than this.

If you’re a keen driver, don’t be put off by the Ford’s performance deficit compared to the Astra. The Focus begs to be belted along, goaded on by a chassis with an almost supernatural ability to feel both ultra-light on its feet and rooted to terra firma. Though not quite as acute as that of the slightly lower, more-tautly suspended ST-Line, the Titanium’s talkative helm remains meaty yet lean, while acute handling agility and seamless cornering control – aided by unobtrusive electronic traction tuning – are further plus points. However, while all this suggests the old multi-link rear may not be missed after all, the vaunted ride suppleness endemic to this series evaporates on the 18-inch wheel and (quality Michelin Pilot Sport) tyre package, replaced by an unwelcome, uncharacteristic firmness that brings lumpiness at odds with the Titanium’s upmarket aspirations. The tearaway RS-V delivers a driving experience that really is dominated by its engine. That’s not to say it lacks dynamic appeal, but its steering is not as consistently weighted nor tactile as that of the Focus, and its chassis tune is likewise not quite as deftly honed to deal with lumpy Aussie roads. Yet the Astra can be hustled through sweeping bends with bridled accuracy, for fast, occasionally scrappy fun that is its own wayward joy. Yes, there’s some torque-steering tugging at the wheel as you mash the throttle out of tight turns, and you’ll likely feel as well as hear what’s going on below, but it’s rarely unpleasant.

Rowdy and a tad unsophisticated the rapid RS-V may be, it nevertheless remains a small-hatch charmer, with a can-do attitude and easy accessibility that helps the Astra ascend above its dated interior. The Opel-based Holden deserves to be on every shopping shortlist, and its price advantage of over $2000 as tested here also sees it land extra scoring points against the Ford. 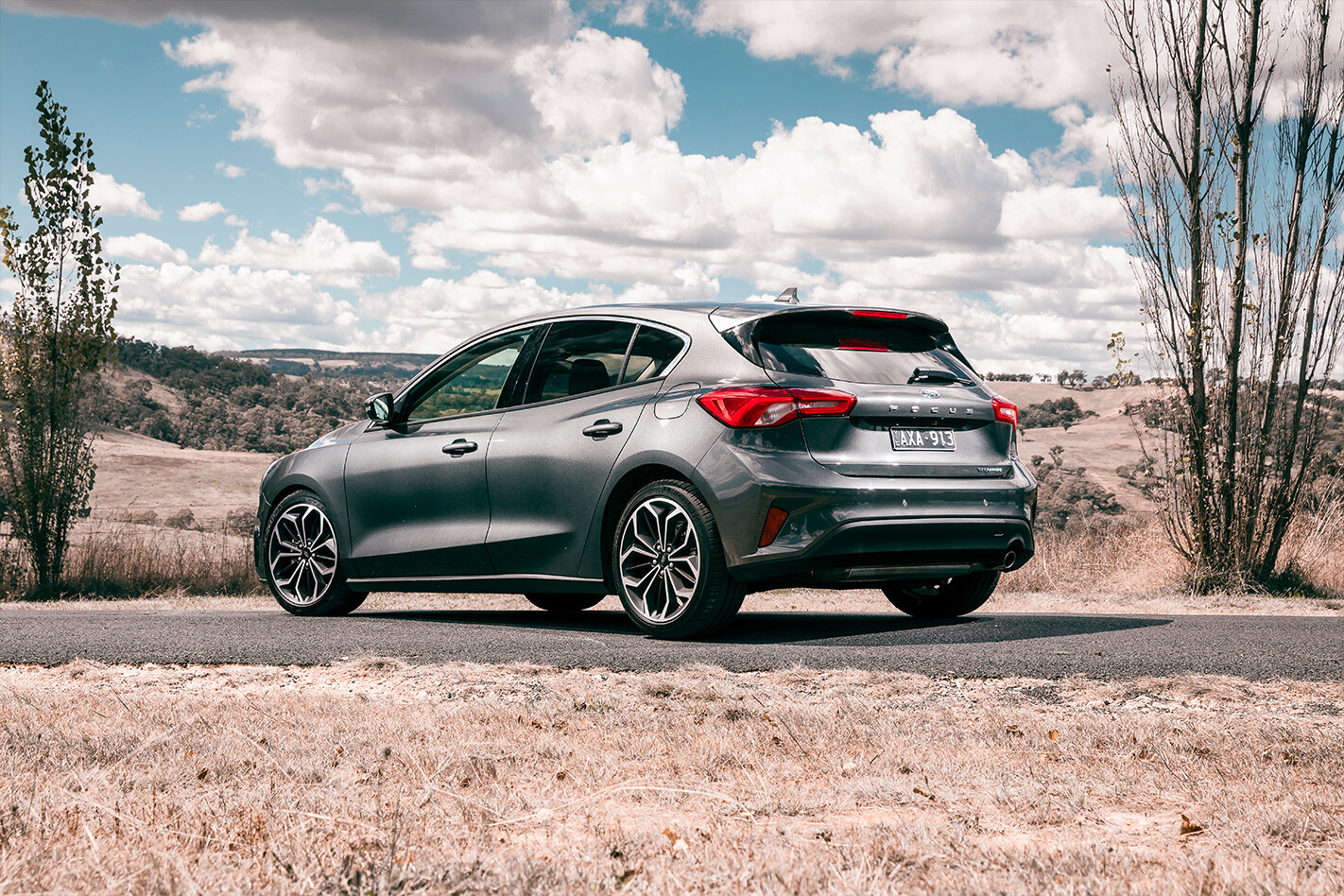 The Ford leaves us with slightly mixed feelings. This Titanium spec model doesn’t quite have the dynamic appeal of the excellent ST-Line, falling short for ride comfort, while failing to lift the patchy cabin’s interior presentation sufficiently to justify the extra spend. It’s what we feared – an inferior rear suspension mated to oversized wheels and ill-judged specification. This is the underachiever of the latest Focus line-up, but it still does possess many great traits instilled in the model line, including a willing powertrain, superb steering and smart packaging. All of which are just enough to get the nod over the Astra, but by a smaller margin than we would have initially predicted.