IT’S KIND of refreshing to see that, in the case of the Citroen Grand C4 Picasso, Citroen is back doing what it does best; hurling the rule book into the nearest dumpster. The Picasso is weird but also wonderful in many ways, and it’s a breath of fresh air to sit in a car made in 2016 that is so bright and open feeling. Of course, that’s a function of the fact that most of the bodywork is made from glass (or so it seems) and the panoramic sunroof fitted to our test car makes the Citroen feel light and bright regardless of which row you’re sitting in. That huge windscreen (that looks like a receding hairline) is good fun, too, and unless you’re a glareophobe as Ponchard claims to be (or the vampire we suspect him to be), you’ll be pushing the sun-visors into their rearmost position and lapping up the vitamin D. If you’ve ever flown in one of those little bubble helicopters, you’ll know the feeling. Just check your insurance policy includes windscreen replacement because a new one is around $1400, and that’s before you recalibrate the sensors and what-not for the active cruise-control and automatic wipers.

But cool is as cool does and in other ways the Picasso’s quirkiness requires you to relearn how to operate a car. The column gearshift, for instance, is on the wrong side of the wheel and Park is confusing to find at first. The central gauge layout is odd on first acquaintances, too. But the big head-scratcher is the interface between you and the audio, climate, sat-nav and phone controls. As in the Cactus (and Pugeot 308), they all share a single screen so you need to flip between the various pages to access them. Want to adjust the temperature while the passenger tunes the radio? Forget it. But there’s also evidence of much consideration, with the removable centre-console and the light in the luggage compartment that doubles as a clip-out torch both suggesting a degree of empathy within the design team. It doesn’t end with mum and dad’s domain, either; the second-row seats have sun-blinds, vents and fan controls, and drop-down tray tables which will make the kids think they’re flying to Bali. The third row also gets vents and reading lights but suffers from gaps between the individual cushions and, like the second row, the seats are small, flat and quite hard. Beyond that, the biggest accommodation hassles amount to a level of booming at speed and the fact that the whole set-up feels a good bit smaller than the majority of the competition here. Which, of course, it is. That said, adults should cope with the third row for short distances unless they’re serial complainers.

The turbo-diesel engine lacks the refinement of the petrol units in some of these cars, and it can feel a little wholegrain at low revs. Thanks to the tall gearing and an auto designed to hold higher gears longer, that is quite a bit of the time. Up and rolling, though, the diesel is sweet and smooth, and the excellent transmission calibration keeps it trundling along with relaxed vigour. 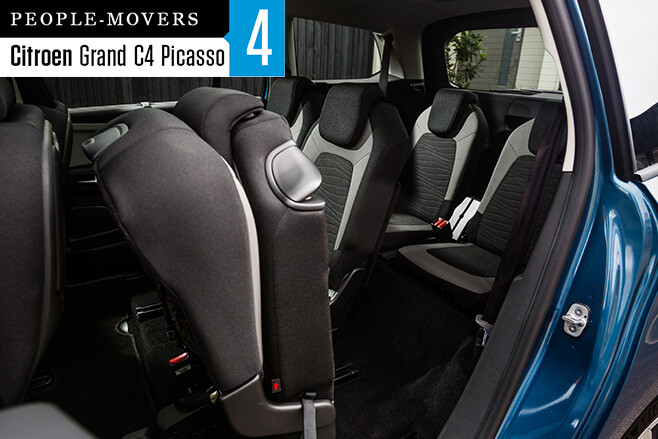 The Picasso’s ride can be a little pattery at times, but generally it feels loping and leggy, and able to cover big distances without raising a sweat. And owners will be all smiles at the (oily) pump. Our test route, which included performance testing, netted a phenomenal 6.0L/100km. Combined with the Picasso diesel’s brilliant tractability and stuff like a seven-year warranty, this is a Citroen that satisfies both the heart and the head.

Since it launched here in February 2014, the Grand C4 Picasso has been offered solely in top-spec Exclusive trim with turbo-diesel power. But when the facelifted model lobs in the first quarter of next year, a turbo-petrol will be added to the line-up.

Likely to be positioned as a price leader, running the same 121kW/240Nm 1.6-litre turbo-petrol as the Picasso five-seat, the refreshed Grand C4 Picasso swaps the diesel’s space-saver spare for a 15-inch steelie, due to the absence of ‘Blue HDi’ exhaust treatment. We sampled an early example following this Megatest and, while it lacks the diesel’s outstanding low-rev tractability, the petrol engine’s refined sweetness and switched-on transmission calibration makes light work of challenging hills, both urban and country.