First published in the September 2014 issue of Wheels magazine, Australia’s most experienced and most trusted car magazine since 1953.

EVER since Audi jumped into Subaru WRX territory with its own all-wheel-drive turbo, we’ve been pitching them into east-meets-west comparison battles to see if the Germans could successfully show the reigning champions from Japan how it should be done.

It all started back at the dawn of the millennium – January 2000 – when the S3 was the newcomer from an Audi that wasn’t nearly as über-cool as it is today. The $25K-pricier German seemed like a WRX wannabe, as though the brand that had established the turbo AWD genre with the ground-breaking, gravel-slinging Quattro couldn’t catch the Japanese maker that had taken the template and run the special stage.

Both red, and both red-hot, but the visual status quo remains: the brash, ballsy Subaru versus the subtly muscular Audi.

Our previous comparos – won by the WRX – came to mind while back-to-backing the 2014 iterations across some of NSW’s best backroads. Both cars have come a long way in a decade and a half, but which has come farther? Has Audi finally turned the tables on its rival?

We might have history with the S3 versus STi fight, but this time it’s different – we’ve never thrown sedans into battle. The arrival of a booted S3 makes our comparo even more relevant than those early instalments.

But the AWD hot-hatch battle of previous generations is no longer possible, because Subaru has dropped the WRX/STi hatchback, citing lack of demand from the all-important American market. 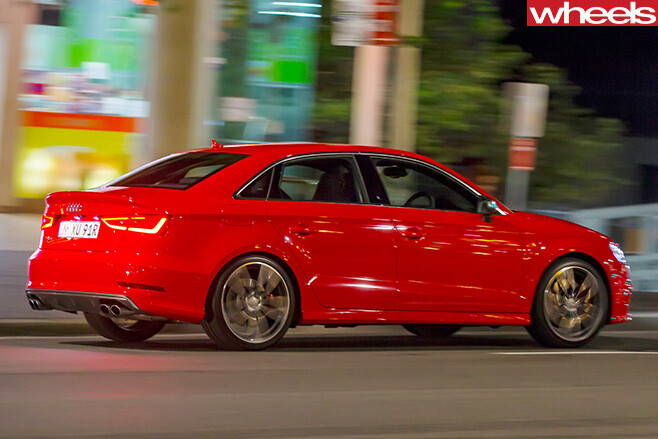 The $62,200 sedan version of Audi’s 8V-series S3 costs $2300 more than the five-door S3 Sportback version with which it shares not a single exterior panel. It’s 145mm longer overall, and brings an 85-litre more capacious cargo bay, though it can’t compete with its stockier sibling’s large loading aperture or 1180-litre seats-flat capacity.

With the fourth-generation STi, it seems Subaru has taken lessons from a recent history plagued by indecisive product positioning and littered with hasty facelifts. In a move that will please diehards, the new model carries over the venerable EJ flat-four engine – a little-changed version of the outgoing STi’s EJ25 turbo – while its hydraulic steering should appeal to old-schoolers. Rather than reinventing the ultimate Rex, Subaru has focused on fine-tuning proven components. Meanwhile, pricing starts $10K below the old model, at $49,990, rising to $54,990 in Premium trim as tested. 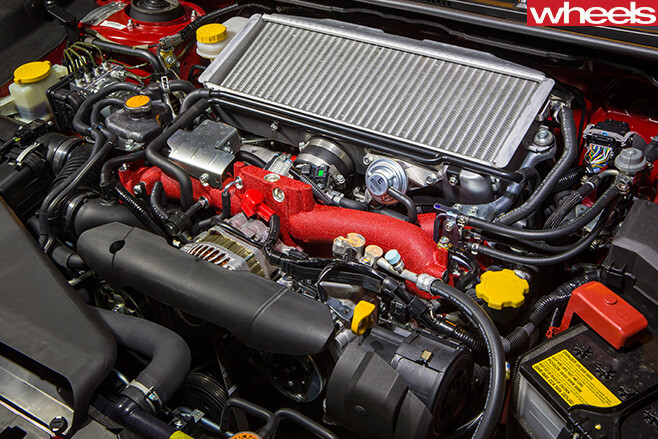 The new Subie’s derivative – and conservative – styling is much more convincing in STi than WRX form, though as ever it’s a bit lairy, so the no-cost option to bin the boot spoiler may appeal to those who have grown up with the brand.

You have to get past first impressions with the STi. On the urban crawl, the steering, though quick-geared, lacks feedback around the straight ahead. But once lock is wound on, the STi feels more connected than the S3, with weighting that sits between the Audi’s over-light Comfort and heavier Dynamic modes.

Press on and the STi impresses. With its driver-controlled centre diff and new torque vectoring system, it is far more throttle-adjustable than both its predecessor and its rival. But the Subie’s starring attraction is its newfound dynamic connectedness. Rather than approaching each corner as its own entity, in the slow-in/fast-out AWD style, you now flow it from apex to apex, stringing corners into a sustained high-G indulgence. Sure, wringing the STi out isn’t quite as involving or as pure an experience as with the likes of a Toyota 86 or Porsche Cayman, but it’s much closer than it has ever been.

Even more than in the STi, the Audi’s steering is aloof until cornered. It’s only once the front end is under serious lateral load that the wheel jiggles in your hands to telegraph nuances of grip. The S3 steers more precisely than the STi and is easier to place on the road, but ultimately doesn’t deliver the Subie’s clarity. The trade-off for the feel delivered by the STi’s increasingly rare hydraulically-assisted quick-rack steering is kickback at the limit not felt in the Audi.

The connectedness of the STi’s steering is a quality that pervades. The newly slick gearshift action and reassuring brake pedal feel are in the same league for quality of feedback, though the Brembos lose some of their assuredness once they become hot. The Audi settles into a neutral mid-corner attitude, but with its clutch-based on-demand AWD system, it lacks the on-throttle balance shift of its bigger trick-diff siblings. The chassis’ resistance to right-pedal adjustment makes the S3 a sure-footed, rapid tourer, but a less than completely absorbing performance car.

Low-speed ride in the Audi is jittery, but it smooths out at speed. The STi is even firmer, though it brings superior secondary ride quality, and settles down above 80km/h. At high speed, with its generous travel and well-damped wheel and body control, the Subaru is spectacularly good at soaking up punishment from gnarly roads.

There’s little in it for road noise. The S3 is slightly better insulated, though more sensitive to the smoothness of the surface on its inch-larger option-pack 19s.

Okay, so which is quicker?

In 2000, the Audi had a six-speed manual to the Subaru’s five-speed, though 2001’s second-gen STi had a six-speed (incredible, then, that the WRX was given a six-speed manual only this year!). But today’s S3 brings the rapid-fire benefits of the S-tronic transmission, giving it an edge over the manual-only STi, which can fall off song during gearchanges. Meanwhile, the S3’s 2.0-litre blurts into the next ratio and surges on with broad torque and a cultured, creamy four-pot howl. The dual-clutch gives the driver less to do and think about, which could be an advantage or a drawback, but certainly helps when you’re tackling a string of 35km/h-posted bends. 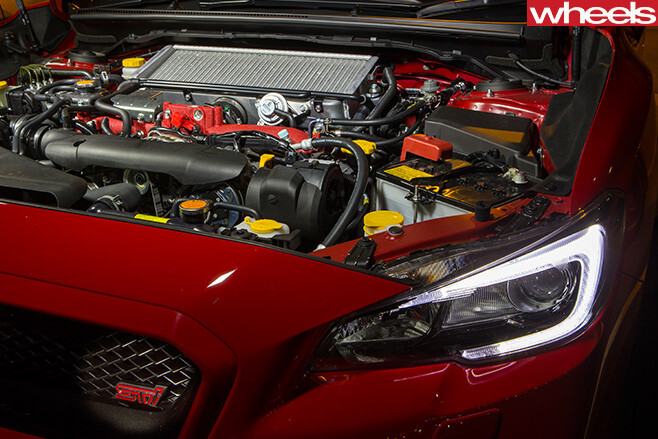 The STi’s EJ engine pre-dates even the original WRX (it goes back to the first-generation 1989 Liberty/Legacy) and its power and torque figures are unchanged from the last model. The 2.5-litre turbo torques harder off the bottom end than the new FB 2.0-litre flat four in the WRX, though it doesn’t truly haul until the tacho needle starts pointing at the sky. From four grand through to the 6700rpm cut-out, it’s on like Hillsong – the new STi goes like the clappers.

The SI-Drive’s Sport mode is the pick, because S# (Sport ‘sharp’) makes the STi feel potent at the expense of the throttle progressiveness the driver needs for a confident twisty-road attack. Yet even in Sport mode, it takes finesse to drive around the turbo engine’s top-end delivery.

The Subie’s in-cabin character (pictured below) is thrashy and a bit sewing machine-like. Bystanders get a better deal – the note is satisfyingly bassy from the outside, with a modded-Rex throb, minus the aftermarket volume level and drone.

STi’s cabin has never been better, with solid build quality and top seats. But the stick-on carbonfibre is unconvincing and the multimedia screen sucks.

The straight-line performance figures are close, but no-one would launch their own STi like we must. Identical third-gear 80-120km/h times – 3.2 seconds – provide a better illustration of in-gear shove and the tight fight between an S3 with 142kW per tonne and an STi with 144kW per tonne.

At the other end of the spectrum, the S3 delivered efficiency to belie its straight-line advantage, drinking 11.2L/100km over our 400km test compared with the STi’s 12.3L/100km.

The wash-up: All grown up?

The STi’s chunky wheel, wrapped in dimply leather (below), serves as a parallel for the newfound driver appeal, and raw-edged character in what’s otherwise a more mature execution. The Audi’s smooth leather rim, then, tells of a polished package. The STi has grown more refined, but it remains rougher-edged than the S3. It’s not as notchy, as knuckly or as shunty as it was before, but nor are its occupants entirely isolated from the workings of its forceful drivetrain and focused suspension.

In terms of interior fit and finish, the S3 (and Audi itself) has gone from very good to benchmark-setting brilliance in the past decade or so.

Elsewhere, while Subaru has floundered attempting to broaden its horizons, Audi was busy playing catch up on the powertrain front. The S3 is now quicker than the STi, from a standing start at least, with refinement and theatrics the Subie can’t match.

S3 is like the Louis Vuitton version of an STi, with unrivalled finish and trim quality.

Never before has the S3 possessed the driver focus to take on the Japanese AWD turbo establishment fair and square, rather than falling back on Audi’s trademark style and perceived quality. If it wasn’t for the new-gen STi’s leaps in dynamic fluidity and polish, there’d be little to separate them.

While the STi is more involving, the S3 is the easier car to jump into and drive quickly. It’s more liveable than the Subaru – though the STi has certainly closed the gap – and has the edge as a tourer.

The sedan-shaped S3 gives the model a point of differentiation against potent in-haus rivals like the Golf R, which is mechanically similar to the S3 and $7700 less expensive. But if class and cachet weren’t reason enough to pay the extra for an S3, the new boot and air of understated exclusivity just might be.

Considering how far the S3 has come in terms of dynamics and overall appeal, it speaks volumes that 2014’s STi can still topple it. When the road soars, dives, sweeps and switches back, it’s the value-packing Subie that ultimately brings greater reward.

In fact, Subaru’s shift from point-and-shoot weapon towards a more fluent sports-car flavour has delivered an STi that, after all these years, is the brand’s most compelling effort yet. 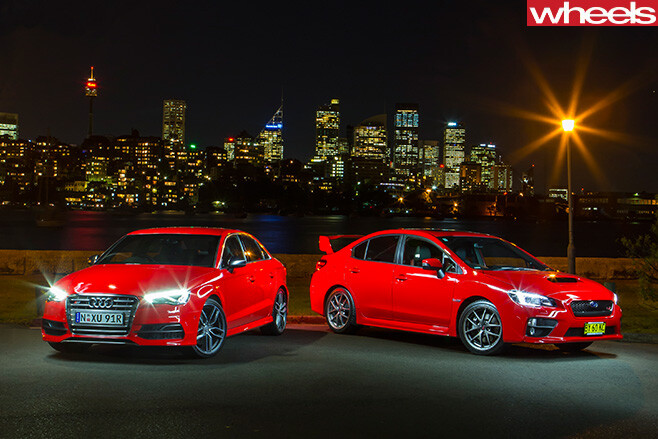 The manual STi has no form of launch control. The most effective way of launching what we’ve previously referred to as the ‘nasty bastard’ involves a close encounter between tacho needle and redline, and a sidestepped clutch. It’s as brutal on the drivetrain and cranium today as it was when it was pioneered in the early 90s. It took several attempts to extract 5.3sec to 100km/h from the STi, which might have been a tenth or two quicker on a surface that enabled a bit of tyre slip. The drivetrain survived, but it felt like a tomahawk had split open my forehead.

The S3, with its launch control and self-shifting dual-clutch ’box, is far easier than the STi to get the best from in a straight line. Lifting my left foot off the brake pedal while keeping the accelerator flat on the shiny VHT at Sydney Dragway resulted in a single, unfussed 4.8sec 0-100km/h sprint, before heat soak set in, and it settled into a string of easy 4.9s. 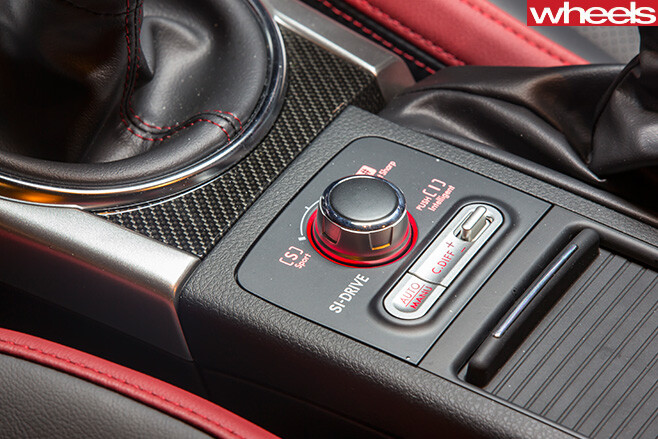 THE driver-controlled centre diff is an STi fixture. The clever coupling, which uses an electromagnetic multi-plate clutch and a locking LSD to tweak the torque bias between the front and rear axles – default is 41 percent front/ 59 percent rear – is worth having. The driver control button is less appealing: ‘Auto’ often works best. The electronic stability control switches off, via a Sport mode, but an ESC-derived torque vectoring system stays active. SI-Drive is of little use – lethargic ‘Intelligent’ mode is dumb and ‘Sport Sharp’ borders on hyperactive. Drivers should stick it in ‘Sport’.