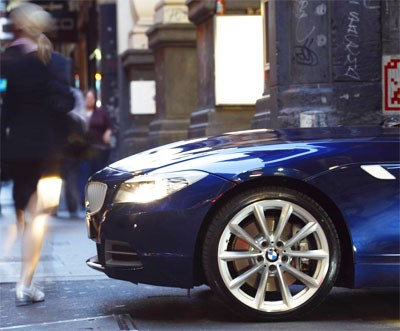 It's a bigger car for a big country. Here's our first local drive of BMW's next-gen Z4.

It goes without saying that a product like the BMW Z4 roadster - a not-inexpensive slab of self-indulgence - is a long way from an obligatory purchase, especially in times when descriptions like financial meltdown and crisis are common.

Now built in Germany, the latest Z4, needed to be a better car than its predecessor. And it is.

This new Z4 takes aim at a broader buyer base than the rather narrow 'purist' positioning of the superseded model launched in 2002. It had to retain the roadster heritage that the marquee holds dearly, and yet meet the challenge of changing market including buyers wanting more sophistication and comfort along with a vigorous driving experience.

An elegant yet aggressive new exterior and glam cabin - the work of two young female designers - hands the latest Z4 a forceful kerbside presence missing from the fussy Bangle-flavoured predecessor, and the Z3 before it.

Sure the long bonnet, long wheelbase and short overhangs - roadster characteristics all - are retained, but now the Z4 it has grown up manfully with the right looks, improved engineering, a new engine range, optional seven-speed dual-clutch auto transmission, and a hike in performance.

Up against smart and increasingly sophisticated rivals such as the Mercedes SLK, Porsche Boxster, and Audi TT, the new Z4 range has risen to the challenge, hitting back at those who claimed with justification that its cabin was too claustrophobic, that today's drop-top sports cars can and should have a sophisticated metal folding roof, and that there should be unlimited places for odds 'n' sods, and that its character should be adjustable to meet the mood of owners, the majority of whom hail from the right side of the tracks..

The gender split of the outgoing Z4 was 71 per cent male/23 female/six per cent unknown.

With female stylists to the fore, hotter performance, and greater comfort and sophistication it's anyone's guess how the sexes will balance up with the new model, which is priced from $120,400.

The new two-piece folding retractable aluminium turret works smoothly and swiftly (20secs) but importantly also meets the aesthetic requirements - with roof closed, the Z4 looks like a sleek coupe and with the top dropped, it is nothing but a true roadster. Many buyers will appreciate the steel roof's greater security.

Weight is up considerably over the old model, with the new roof and its mechanism contributing to much of the increase. The new car is also lower, longer and wider, though the wheelbase 2496mm) is within a frag of the old one.

Pushing it hard early in the morning on the irresistible Great Ocean Road, Wheels noted a hint of understeer, quite neutral behaviour across the face of a corner, and then excellent power-down traction when the accelerator gets used on exit. No complaints about brake pedal modulation and performance either.

With no interruption in power delivery, the paddle shifting seven-speed auto (a $3500 option) is also familiar to us from the likes of the 335i and we like everything about it bar the ambidextrous paddles (same on either side - push away from down; pull up for a higher ratio). (Way better are the traditional paddles reserved for M cars - the left one for down and the right for up...)

We tried it but struggled to see the value. In Normal mode, the ride comfort on less than brilliant road surfaces is acceptable, although the electric steering is a little light. In the Sport and + modes, the steering weight improves to more to our liking but the firmer shocker settings can occasionally unsettle the 35i.

The Z4 is equipped with standard run flats and they can sharpen the ride on uneven surfaces. But there is no scuttle judder. None.

The exhaust note, while a little muted due to the turbos, is a pleasantly refined sound.

Pleasing too is the cabin ambiance, practicality and room. Even bigger people enter the attractive cockpit way more easily than before. There's good elbow, shoulder and head room. Visibility is improved by 40 per cent.

Hammering the 1580kg twin-turbo Z4, we noticed the consumption of the 98 RON jumped to around 14 litres/200km. But, later, in a mix of spirited and easy freeway use, the fastest and most powerful of the new Z4 range was good for 10.1 litres/100km.

There will be a hotter M version down the track. 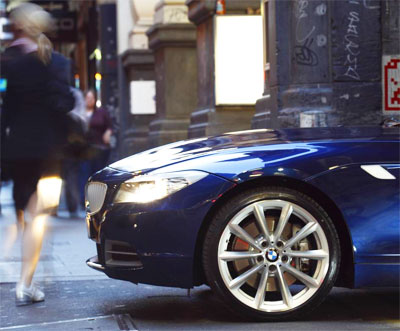 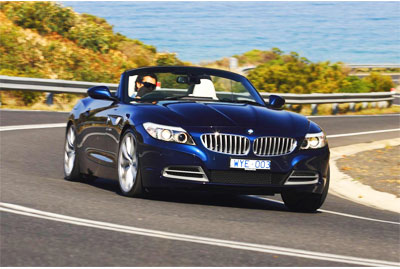 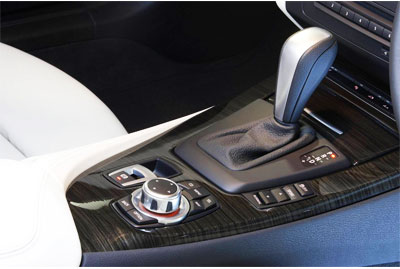 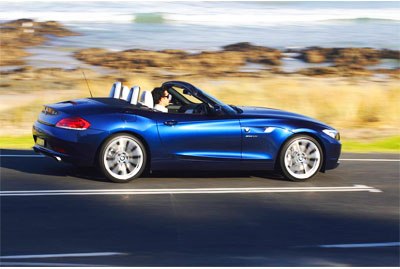