Grab a hold of the horns as WhichCar takes you for a wild ride through the history of Italy’s charging-bull supercar brand, Lamborghini.

Here we focus on Lamborghini, the Italian brand that was started by an unhappy, tractor-building Ferrari customer, who set the blueprint for the modern supercar in the 1960s and has become the poster-child for some of the world’s most exotic automobiles. 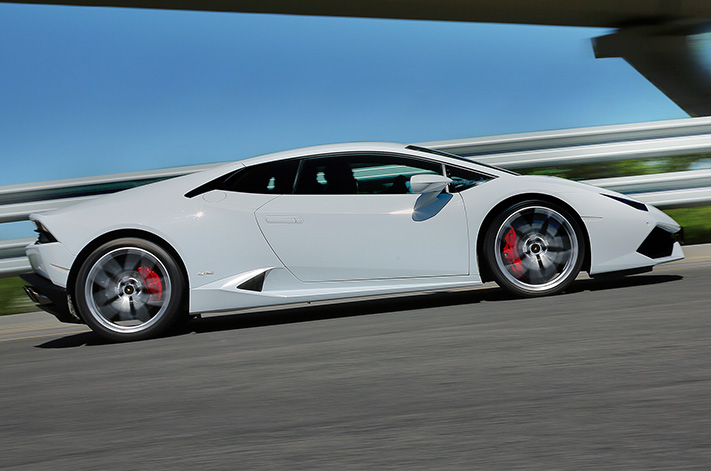 IT ALL STARTED WITH A BAD FERRARI CLUTCH

Italian industrialist Ferruccio Lamborghini had already made his wealth in the tractor business following World War II, but an encounter with Enzo Ferrari was the catalyst for an expansion of his automotive activities. The story from the early 1960s goes that when Enzo was rudely dismissive of Ferruccio’s complaints about the clutches on the several Ferraris he owned, he decided to build a better Ferrari. And in 1963, after buying a plot of land in Sant’Agata, near Bologna, Automobili Lamborghini was born.

Lamborghini’s famous charging-bull badge relates to Ferruccio’s birth sign – Taurus – though it was also inspired by the founder’s 1962 visit to the Sevilla cattle ranch of famous Spanish breeder Don Eduardo Miura Fernandez and his famously tough fighting bulls. After the simple 350GT and 400GT names were used for the first two Lambos, bullfighting-inspired names have dominated the company’s line-up since the 1966 Miura. 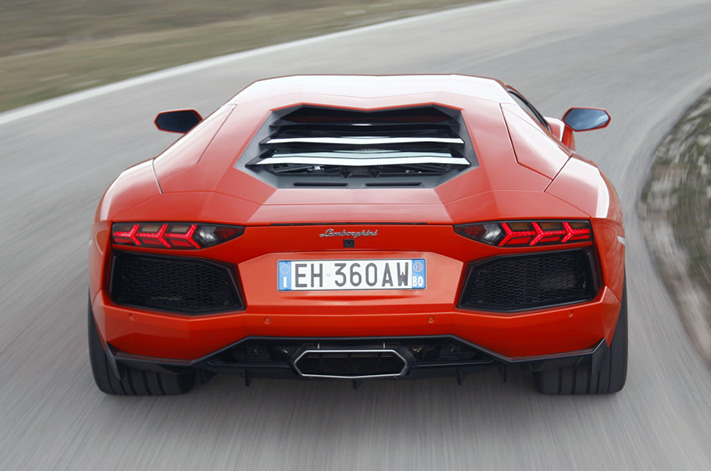 BIRTH OF THE MODERN SUPERCAR

The Miura pioneered the modern mid-engined supercar and is still regarded as one of the most beautiful cars ever built. Yet Ferruccio never anticipated its success, choosing only to put it into production as a promotional vehicle for his favoured GT cars. The Miura had started as a chassis concept created by two young engineers – Giampaolo Dallara and Giampaolo Stanzani – who had taken the 4.0-litre V12 from the 400GT, turned it sideways and, inspired by a trend in motor racing, positioned it behind the driver. By the 1966 Geneva motor show, the chassis had been clothed in a sensuous coupe body – penned by a 25-year-old from Italian design firm Bertone – and the model was an instant hit. 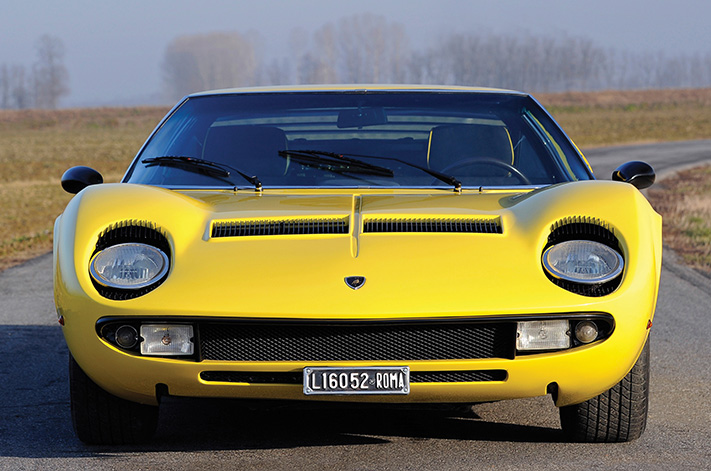 Ferruccio wasn’t interested in taking his cars racing, but the company’s New Zealand test driver, Bob Wallace, wasn’t deterred from building a racier version of the Miura. Called the Jota, the name of a Spanish dance rather than bull, it featured more power for the V12, was lighter thanks to an aluminium body, and the chassis was significantly strengthened. Resulting performance was stunning: 0-100km/h in less than four seconds. Fixed headlights, a single wiper and plexiglass windows were just a handful of the exterior changes that clearly differentiated the Jota from the regular Miura. Ferruccio stuck to his anti-motorsport stance, however, and the original prototype ended up being sold to an Italian millionaire – who promptly crashed it, with the resulting fire destroying it. A few Miura owners demanded their car be upgraded to a ‘Jota’ spec. If you own one of them today, you’re rich. 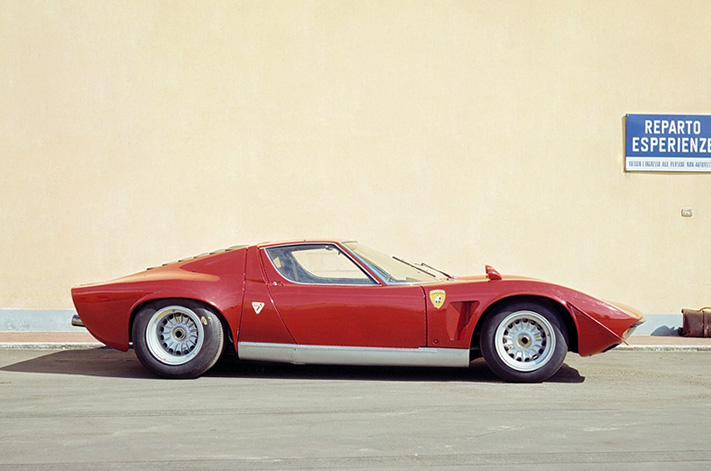 The 1971 Miura SV adopted some of the Jota’s improvements and expanded upon some of the luxuries introduced on the 1968 S version, though its lifespan was ended just a year later by its successor. The Countach, also penned by Bertone, overshadowed the SV at the 1971 Geneva motor show, stunning audiences with its dramatic, wedge-shaped, sharp-edged styling and ‘scissor’ doors. The model went on sale in 1974 and would end up Blu-Tacked to countless bedroom walls as its design became increasingly lairy – big wings, fatter tyres, wider intakes – until production ended in 1991. 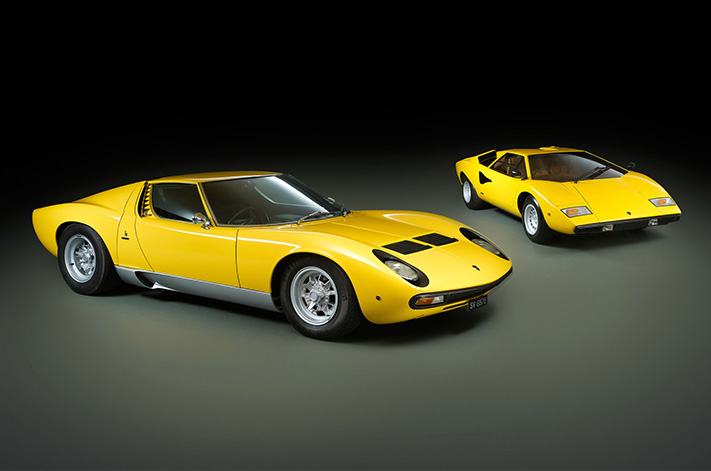 FROM CAR-MAKING TO WINE-MAKING

Lamborghini’s tractor business encountered difficulties in the early 1970s, not helped by labour union unrest. A frustrated Ferruccio sold 51 per cent of Automobili Lamborghini to Swiss industrialist Georges-Henri Rossetti in 1971, before completing his exit a year later by selling his remaining shares to friend René Leimer. Ferruccio maintained a handful of non-automotive businesses after semi-retiring to a region of central Italy to make wines. He passed away in 1993.

Lamborghini was involved in the birth of the very first BMW M performance car in the late 1970s. With the Italian brand’s facilities underutilised owing to struggling sales, it was drafted in 1976 to help the German car maker build a new mid-engined sports car for racing homologation purposes. It was testing prototypes of what would become the fabled M1 at Sant’Agata a year later, but Lamborghini’s financial difficulties forced BMW to complete the project elsewhere.

Lamborghini’s tractor and supercar DNA converged in 1985 to create what was then the world’s fastest off-roader – the LM002. The unexpected production model had its origins in a late-’70s all-terrain buggy called the Cheetah, which Lamborghini produced in conjunction with Chrysler at the behest of the US Military. It was snubbed, however, in favour of the Humvee, or Hummer. The eventual LM002 swapped the Chrysler V8 for the Countach’s V12 for 200km/h performance, though its three-tonne mass also meant the world’s worst fuel consumption for a production vehicle: about 34 litres per 100km. Great off-road ability made it popular in the Middle East.

Lamborghini had a five-season spell in Formula 1 between 1989 and 1993, powering teams including Larrouse and Lotus with a 3.5-litre V12. The engine’s reliability wasn’t the best, though, and the only podium was Aguri Suzuki’s third place at the 1990 Japanese Grand Prix. The V12 ended up in a McLaren in 1993 – purely to be tested as a potential replacement for the famous constructor’s under-performing Ford V8. Triple world champion Ayrton Senna embraced its power and pushed for its use, but McLaren boss Ron Dennis instead opted for a Peugeot V10. Lamborghini pulled out of F1 and Senna’s determination to win again saw him move (fatally) to Williams for the tragic 1994 season.

POWER TO ALL FOURS

The Diablo, powered by a 5.7-litre V12, replaced the Countach in 1990. It was still rear-wheel drive, though three years later the company presented a variant called the VT. It stood for Viscous Traction, reflecting the viscous coupling that linked the Diablo’s front and rear axles. Lamborghini’s flagship models have been all-wheel drive ever since. 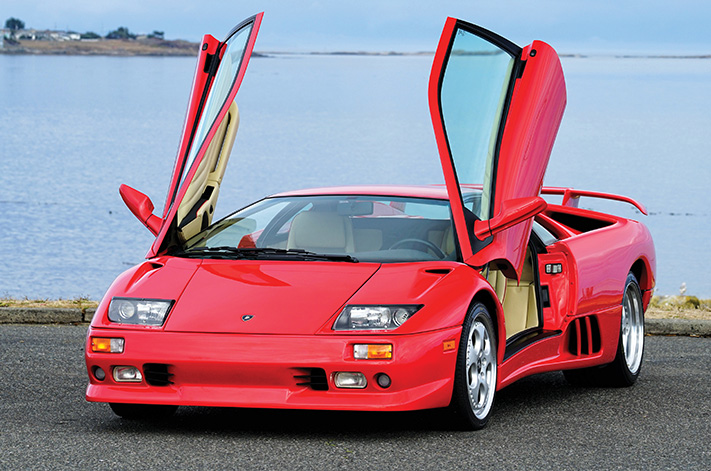 US car maker Chrysler had bought Lamborghini in 1987 but sold it to a group of Indonesian investors just years later. Lamborghini then approached Audi about borrowing the V8 from its A8 limousine for use in its ‘baby Lamborghini’, only for the German brand to see Sant’Agata’s potential during a visit to Italy. Audi’s 1998 purchase would transform not only Lamborghini’s production quality but also its sales fortunes.

The 2001, Murcielago was the first major model under Audi stewardship, replacing the Diablo as Lamborghini’s V12 flagship model. Constructed around a hand-made carbon fibre tub, the Murcielago also produced 433kW of power. While it would prove to be successful itself, the V10-powered Gallardo of 2003 was a relative showroom revelation. To put things into perspective, Lamborghini sold 25,000 to 30,000 cars between 1963 and 2013 – and Gallardos accounted for 14,000 of them. It also spawned Audi’s first ever supercar in 2007, the R8, which shared key components with the Gallardo, including its V10 engine (though the R8 also offered a V8). 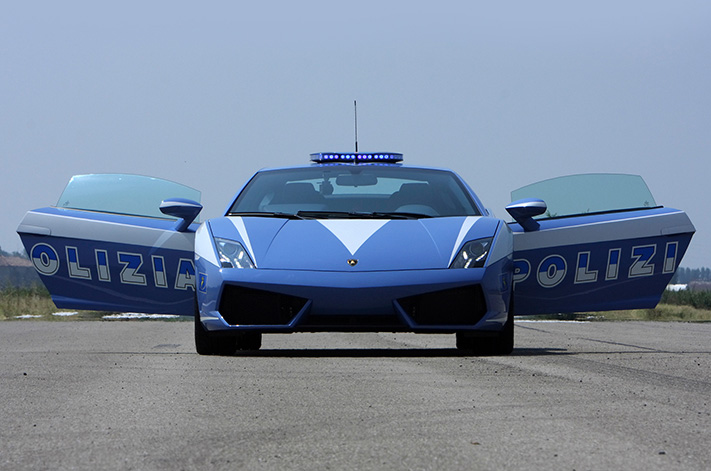 Almost half of Lamborghini’s 1300 employees work in its Sant’Agata factory. Although the two, U-shaped production lines – for the V10 Huracan and V12 Aventador – feature automated processes, the hands-on production nature is emphasised by the presence of just one robot. And its task is only to transport the heaviest components between stations.

It takes seven cows, sourced from a local farmer, to create the leather interior for each Lamborghini. And there’s no wastage. Any imperfect or superfluous leather is recycled for the company’s merchandise range, for items including wallets and bags.

Lamborghini currently produces approximately 2000 Huracans and 1000 Aventadors per year, though annual production will double from 2018 for a new SUV model codenamed Urus. Using a vehicle architecture related to that already used within the VW Group for the Audi Q7, Bentley Bentayga and next-generation Porsche Cayenne, the Urus will also borrow a 4.0-litre twin-turbo V8 – making this the first ever Lamborghini to feature turbocharging.

AND YOU CAN STILL BUY A LAMBORGHINI TRACTOR

A separate company called Lamborghini Trattori – which still uses the original logo script and bull – continues to build tractors in different parts of the world. None is powered by a V12, of course. 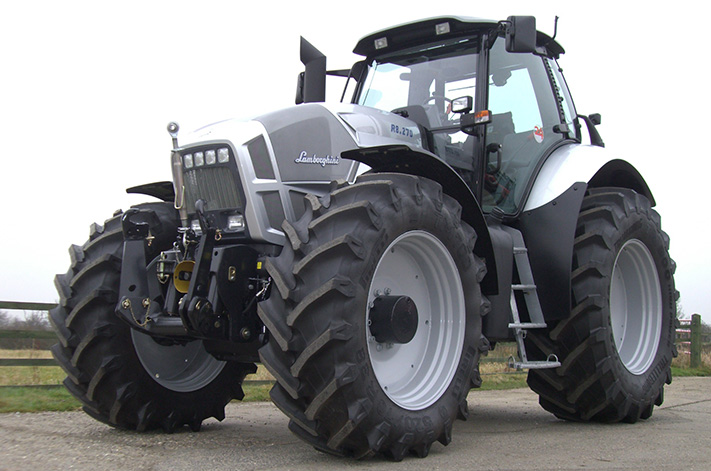 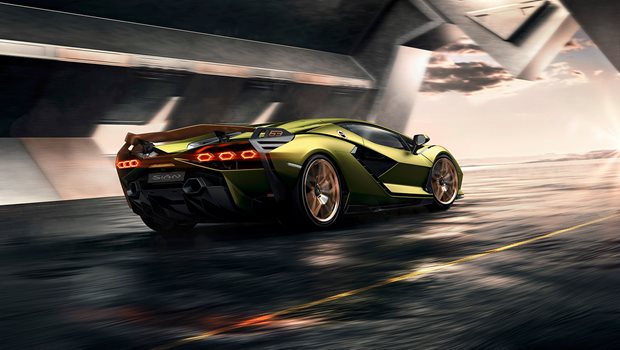