What is selective high beam, and how does it work?

How does a new breed of headlight allow you to keep your main beam on without dazzling other road users?

Not terribly long ago, automatic high-beam was considered to be rather novel – a high-tech trick rarely found outside of the luxury segment. These days, however, that technology – which flicks on the high beam when the road ahead is clear of other cars, and turns it off when it isn’t – is a lot more ubiquitous and found in cars of almost all sizes, both premium and mainstream.

But there’s a more recent evolution of the humble headlamp that can actually keep the road ahead flood-lit by high beams, yet avoids blinding the drivers of cars in front of it. Generally dubbed ‘adaptive high beam’ or ‘selective high beam’, they do exactly what their name suggests – they morph and adapt the shape of their light beams to brightly illuminate the things you need to see, while casting shadow over the stuff that shouldn’t be lit up – including the retinas of your fellow road users. 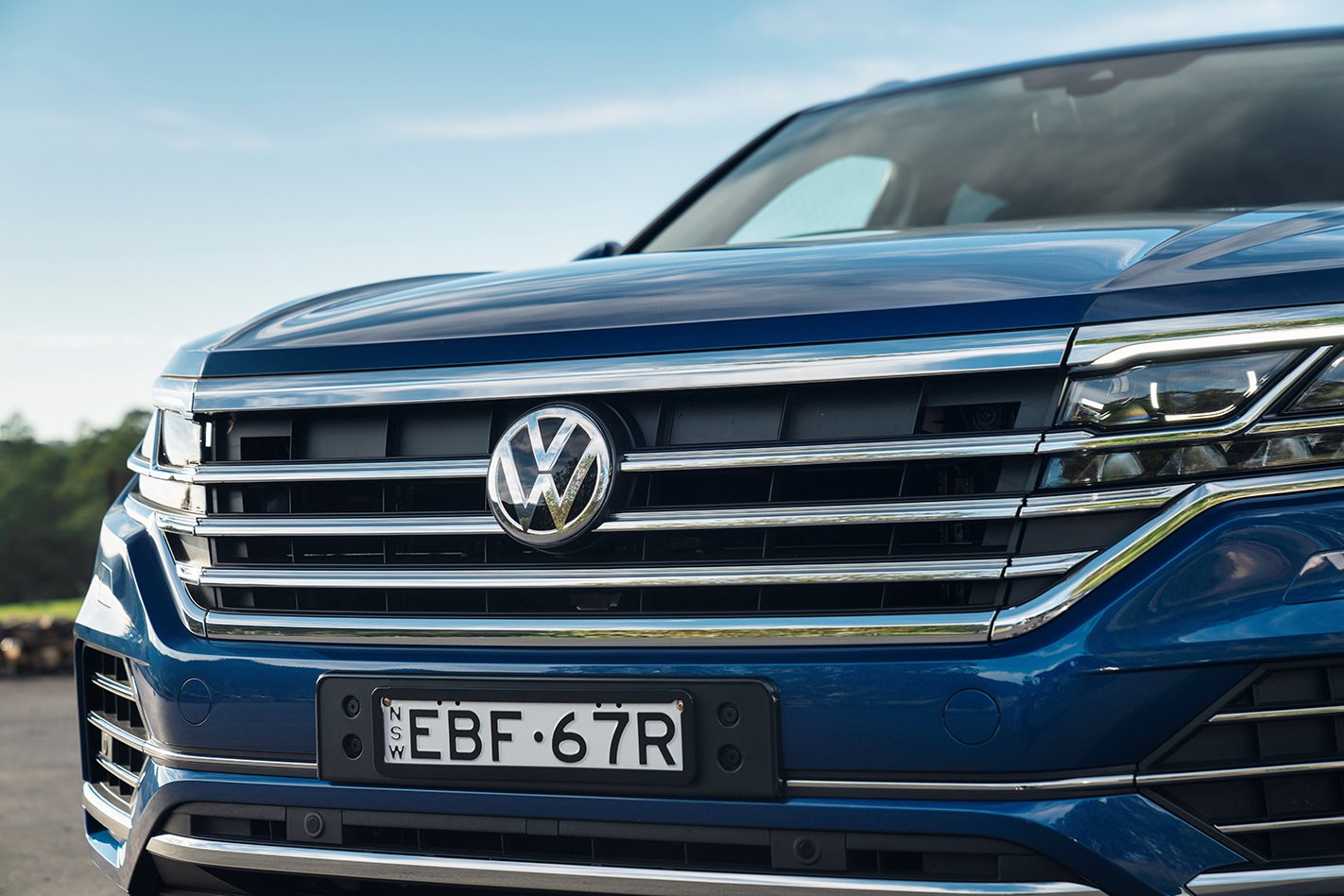 How they do so is pretty fascinating. The technology was introduced by BMW and has also been developed by Mercedes-Benz and Audi, the latter of which markets it as “Matrix LED” adaptive headlights on many models in its range. Now it’s trickling through into the mainstream, with the new Volkswagen Touareg Launch Edition boasting the same tech as standard. The principle of their function remains the same in both Audis and VWs.

In the Touareg’s Matrix LED headlamps (below), the high beams (shown as ‘main beams’ in these images) and the headlights (or ‘dipped beams’) are cast by an array of 80 light-emitting diodes (the LED in Matrix LED) in each headlamp unit, plus an extra three on each side for static cornering lights. Each of those LEDs only lights up a very small section of the road ahead, meaning that with all of them working in concert, the light pattern can be finely adjusted by switching individual LEDs on and off. 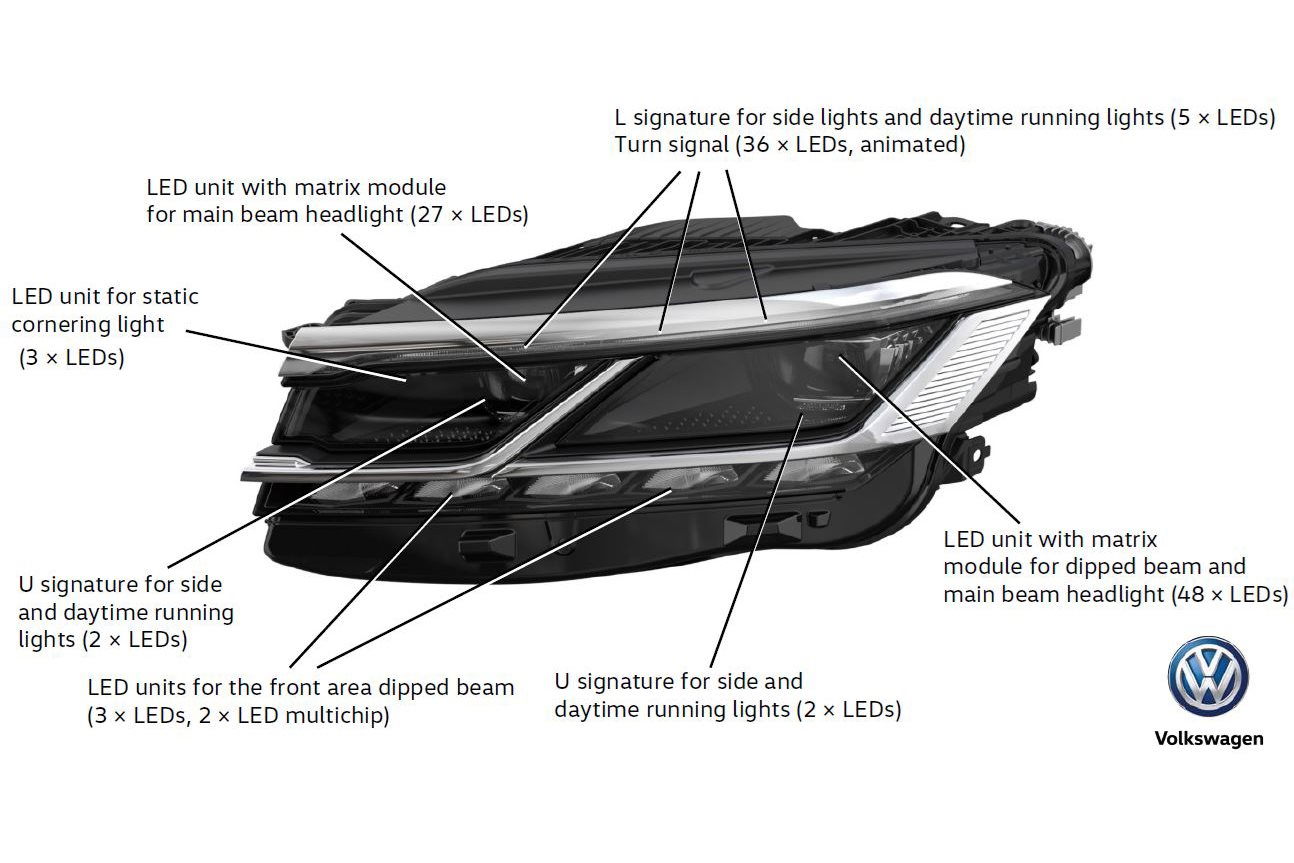 What’s more, the light output of each individual LED can be varied. That means that a portion of the road ahead can be lit dimly rather than darkened entirely, or illuminated even more brightly to draw the driver’s attention to that particular area. Clever.

Here’s what the beam pattern looks like when you’re driving with just your dipped beams on. Each of those rectangles represents the illumination area of a single LED, with red ones being more brightly lit than the ones shown in yellow: 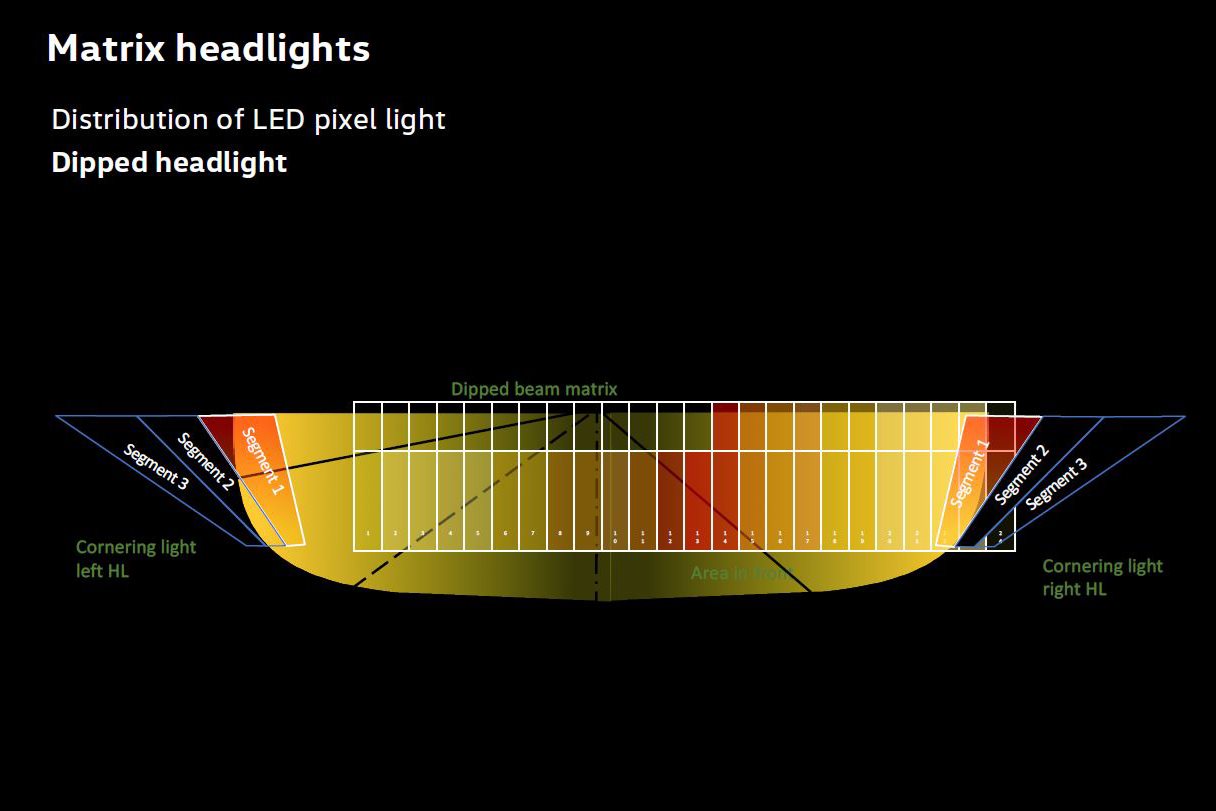 Pretty standard, with a beam cut-off that’s perfectly flat and just below the horizon to avoid casting light into the wing mirrors of cars in front. Note that the examples shown are for a right-hand drive vehicle, so the right side of the road is more brightly lit to help the driver see pedestrians and cyclists at the kerbside – our cars obviously have that pattern mirrored given we drive on the left.

So how does it look when the high beams are on? 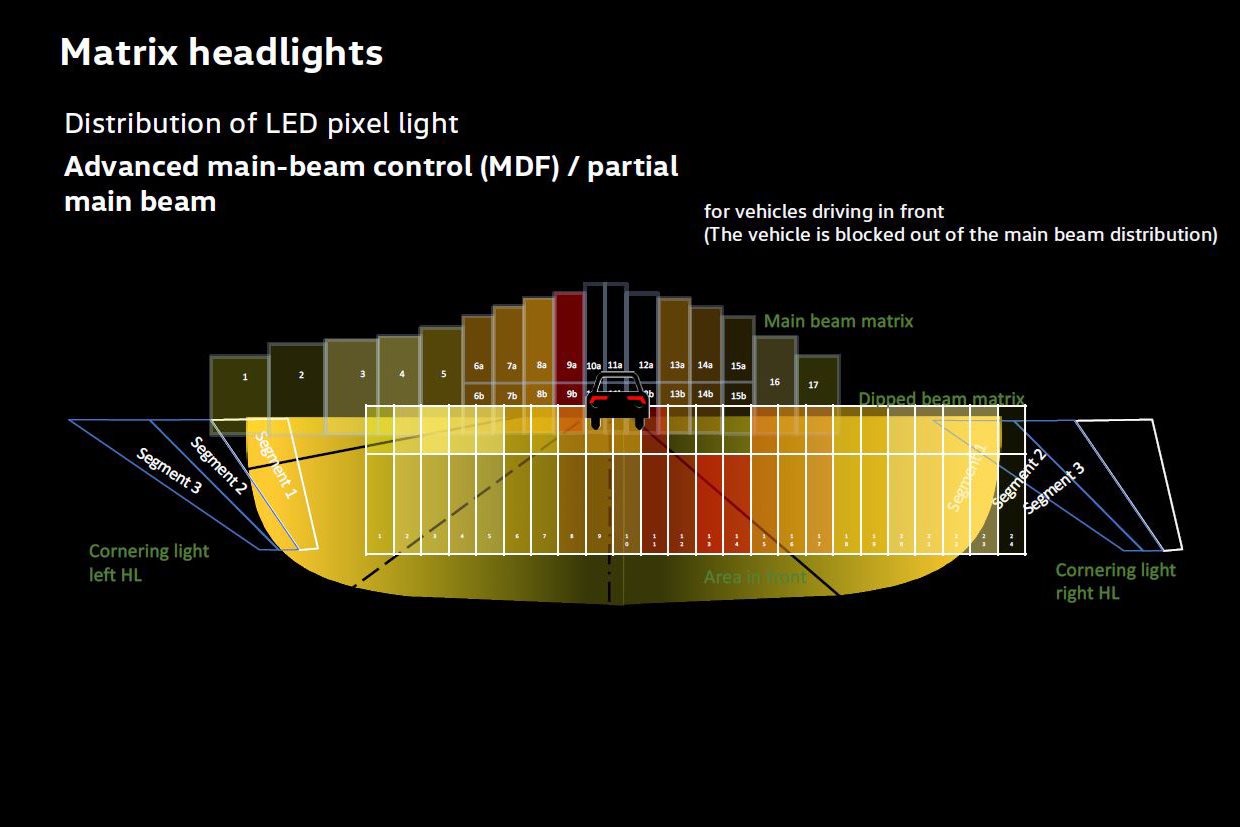 Those upper rectangles are all for the main/high beams, and as you can see they’re all lit up except for the ones that are over the car in front. How does the system know which LEDs to switch off?

A forward-facing camera keeps lookout for points of light ahead, and can distinguish between the tail lights of a car or motorcycle, the headlamps of an oncoming vehicle, roadside reflectors, street lamps and the moon. When it detects what it thinks might be another vehicle, it blanks out the corresponding LEDs. 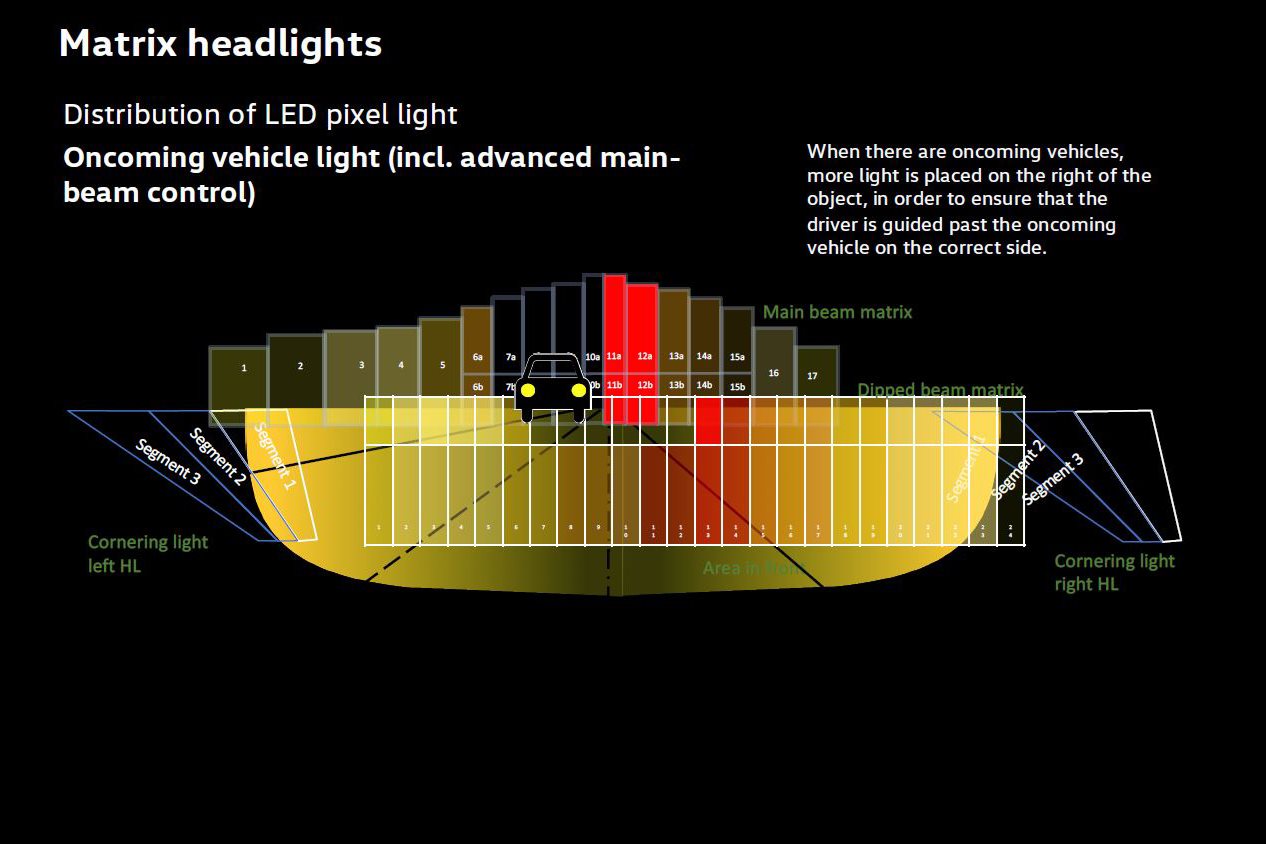 Above is what the beam looks like when there’s an oncoming vehicle. See how the LED segments to the right of the oncoming car are lit brighter? That’s to guide the driver’s eyes to their own lane, ensuring they don’t fixate on the lights of the oncoming car.

When overtaking, the Touareg's lights will shine brighter on the lane being used to overtake, again to focus the driver's eyes on where they intend to go and light up any potential danger earlier.

It’s also smart enough to avoid having the car dazzle its own driver. Reflective signs can be distractingly bright when lit by high beams, but the Matrix LED system quickly recognizes the situation and automatically darkens sections of its beam to keep those signs from reflecting too much energy, while still keeping them visible to the driver. 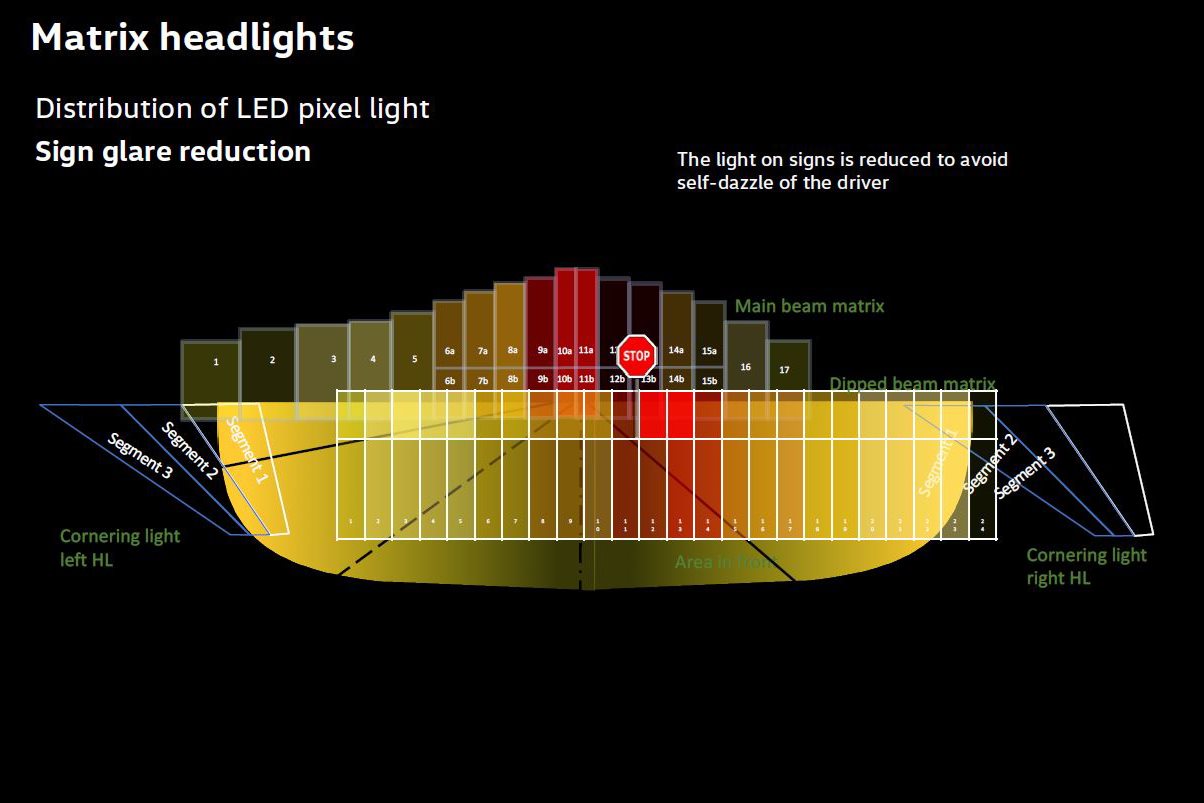 There is, unfortunately, one downside – this kind of multi-beam LED headlamp is still quite a costly feature, and while the Touareg Launch Edition has it as standard, it’s still an $89,900 car.

For now, it’s the preserve of German luxury brands, so it’s not something you’ll find on more prosaic cars like the Toyota Corolla. That said, LED lighting was once a luxury-only feature, and now you’ll find it as standard on a Honda Jazz – the trickle-down effect can be astonishingly rapid, so watch this space.