You no longer need a compatible infotainment system if you want to use Android Auto in your car.

Trouble is they can only be used with newer cars with compatible infotainment displays. Until now… well, at least with Android Auto.

Google has announced an update that will allow Android Auto to be viewed directly on your phone’s screen independently of the car’s infotainment system. That’s a game-changer for those with older cars that aren’t equipped with anything more sophisticated than an AM/FM/CD audio.

While you’re able to use a lot of the individual mapping and entertainment apps on your phone now, Android Auto 2.0 will bring them all together to access music with apps like Spotify, Pandora or Google Play Music, and make calls or send messages with hands-free voice commands and navigate with Google Maps while you drive.

The interface is simplified and de-cluttered to make it easier to use while on the go, and only select apps can be accessed through it – reducing the chance of the driver becoming distracted. Also if your car has a Bluetooth audio function it can automatically start the app when you start your car.

Google says “OK Google” voice integration (its version of Apple’s Siri voice assistant) will be available in a few weeks to make operating these functions totally hands free so you can stay focused on the road.

Of course this will work best if your phone is installed in a car mount to help you use it within your general field of view. In many states, it’s a legal requirement if you want to use your phone in your car as a navigation device.

Android Auto 2.0 is now available for free in more than 30 countries where Android Auto is currently available, including Australia. 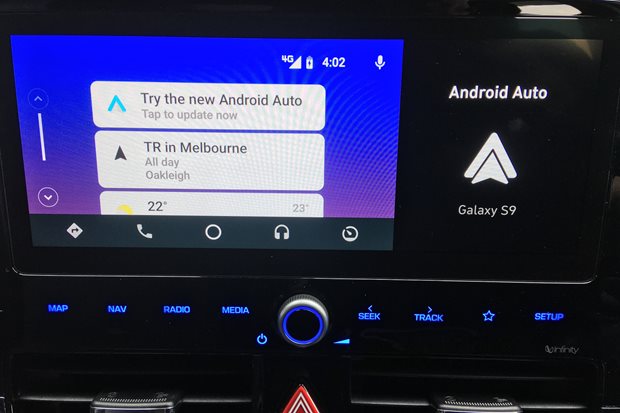 If you use an Android phone in your car, the updated Android Auto function offers new features and functions – but it’s not perfect